What a ride. That's all there is to say after Day Two of truly historic Magic.

A format only debuts once, but it's hard to ask for much more than we got from the MTG Arena's Historic format at the 2020 Mythic Invitational. From explosive turns to the ramping power of and to the grindy and decks, Historic had something for everyone.

Concluding the second day of competition, after 14 rounds of battle, eight competitors remained. A format that was deemed wide open at the start of the event proved just that, with five different decks making the Top 8. At one point late in Day Two, eight of the top 10 players in the tournament were playing different archetypes.

The Historic Top 8 remains ahead, and it will be played by the best in the business. The absolutely stacked final players—with 39 previous Top Finishes between them—demonstrated their mastery of Magic's newest format and will now battle over two more days to become the champion of the 2020 Mythic Invitational. The first set of matches will be played on Saturday, with elimination matches, culminating in a champion, playing out on Sunday.

The Top 8 is Locked

Former Player of the Year Luis Salvatto lead the way through Day Two. He got off to a blistering start on Day One and then turned in a perfect record on Friday to draw in as the top seed at 12-1-1.

The Pro Tour Rivals of Ixalan winner is no stranger to the pressure of Top 8 stage, but neither are his opponents. Joining him in the Top 8 were:

That's multiple members of the Magic Hall of the Fame, the top deck builders of today, and one true underdog in David Steinberg.

Steinberg has played Magic for 14 years but made his first Top Finish, after qualifying for the Mythic Invitational through the January 2020 Qualifier Weekend. He'll face an uphill battle against Magic elite, but that was no hurdle as he took a well-positioned Sacrifice deck to the Top 8 by defeating similarly elite players such as Marcio Carvalho, William "Huey" Jensen, and fellow Saturday competitor Luis Scott-Vargas along the way.

On the other side of the coin, Ken Yukuhiro is making his third Top Finish in just less than a year, an incredible accomplishment for the Japanese deckbuilding master. He didn't go completely off the beaten path this time around, but he did add to his Mono-Red Goblins deck, tricking it out for the mirror and to maximize its odds of ramping out . Going (slightly less) rogue once again paid dividends for Yukuhiro as he was the only Goblins player to make the Top 8.

And that's just scratching the surface of a Top 8 packed with over three dozen career Top Finishes combined. You can learn more about each of the Top 8 competitors and their decks with their Top 8 profiles.

Here's how the Top 8 decks broke down:

Goblins was unquestionably the premier deck entering the tournament, with nearly a third of all competitors casting s. But as the tournament progressed, it became clear that while can—and does—regularly win games on its own, there was a card that was singularly positioned to excel against the Goblin-filled board.

Enter . Or, if you've been playing Standard as well, welcome back .

It was a blast from the past, as and were back, alongside , and their new Historic best friend . While Sacrifice decks aren't positioned well against everything in Historic, it was the perfect choice for this weekend as so many players played Goblins—creatures that with typically just one or two toughness. teamed up with new addition to deal massive amounts of damage out of nowhere and bypass any defenses.

While Salvatto secured his Top 8 berth early, Scott-Vargas and Manfield both made it through tiebreakers in the final round. And they had to earn it as each faced challenging matches in Round 14. Manfield's match against fellow Magic Pro League player Chris Kvartek was undoubtedly the highlight, as we learned that Muxus can, in fact, whiff.

Kvartek would actually go on to win that game thanks to another copy of Muxus, and that sent things into a thrilling final game against Manfield. In the decider, it was the Hall of Famer who had the upper hand, quickly turning the corner after resolving Nissa to end the game with a clutch .

For players who didn't want to bring Goblins, everything was truly on the table. That included Azorius Auras, a favorite for Magic broadcaster Maria Bartholdi (and everyone else too) that put Shinsuke Hayashi into Day Two.

It was a throwback reprint that helped Matt Nass to the Top 8. Piloting Mono-Black God-Pharaoh's Gift, Nass credited as not just the best card in his deck, but the best in the entire format.

He may have a point. was originally printed in Urza's Saga in 1998, and has remained an iconic card ever since. It entered Historic and was the most-played utility land in the Mythic Invitational, thanks to it's powerful and unique ability to sacrifice a creature for two mana.. Multiple decks made use of the card, but none moreso than the combo list Nass used to activate and "cheat" into play as early as turn four.

But the day truly belonged to Luis Salvatto, and to the Rakdos Arcanist deck he dominated the field with. He gave us some memorable moments on Day One, and he continued to cut through the field on Day Two thanks to his innovative Rakdos Arcanist list. Combining powerful one-drop spells and cheap creatures like and , it leverages cards like , , and (backed up by and ) to be both aggressive enough to end games before the slower decks take over, and disruptive enough to keep Goblins off their key spells.

All in all, it was a dominating shell in the hands of Salvatto.

"I think it's the best Game 1 deck, and since the last metagame shift positioned Goblins so highly people started to underestimate graveyard hate," Salvatto explained. "Maybe two weeks ago this would have been a bad deck, but today I faced a lot of opponents with good ways to deal with the absurd amount of value the deck has, and I didn't face a single in play. In the past I've lost several times in the past because my deck choice wasn't good, but this time I'm feeling pretty confident."

There is one person familiar foe that Salvatto should be on the lookout for, though, when play begins.

Well @LuisSalvatto may have beat me out for Player of the Year, but I'm about to get some revenge! See you all tomorrow.

The 2020 Season Grand Finals is Set

Finally, there was one other thing to play for this weekend: a spot in the 2020 Season Grand Finals. 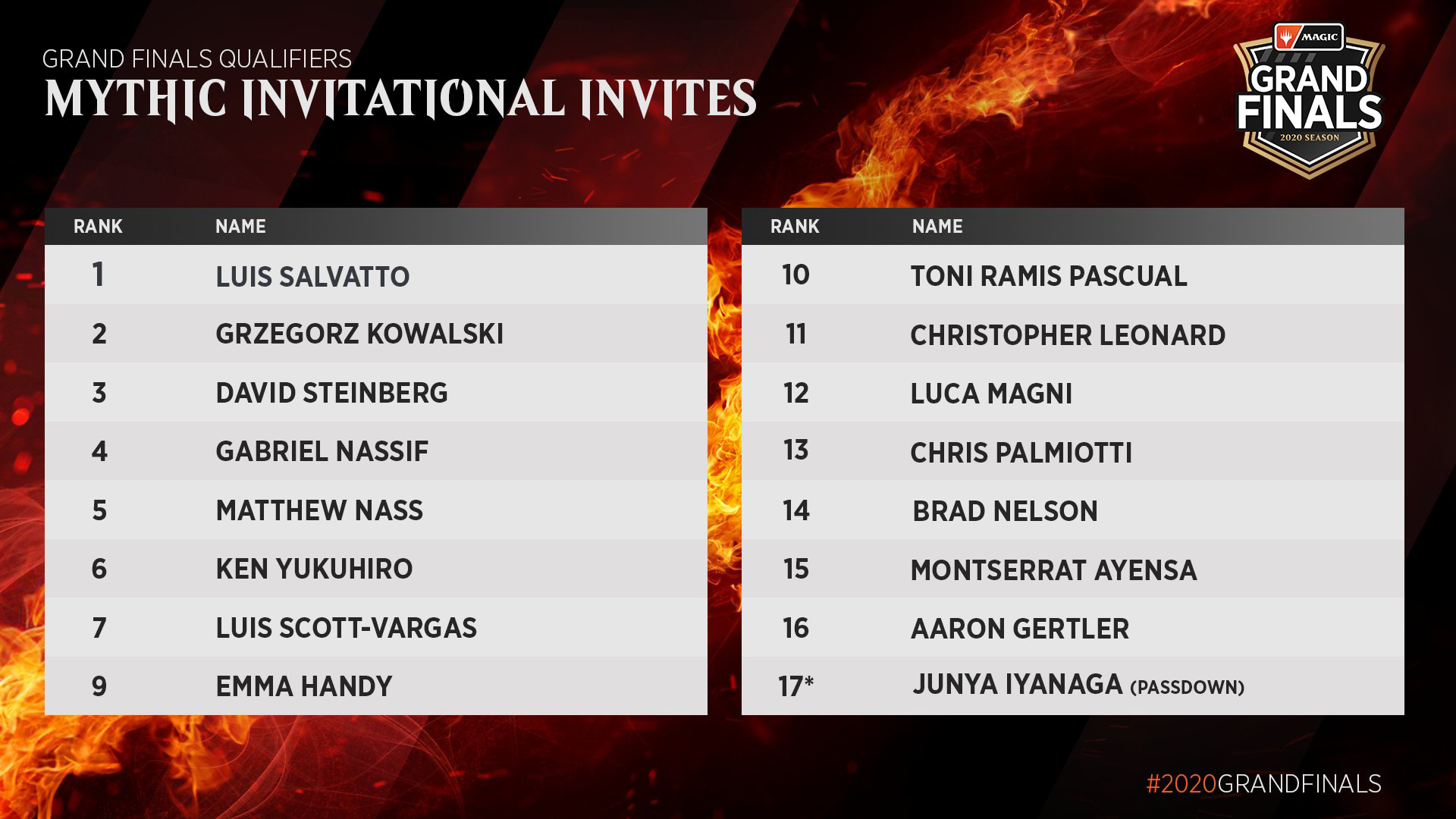 The Top 8 wasn't the only thing on the line today.

Congratulations to the Top 16 from the #MythicInvitational who qualified for the #2020GrandFinals! They'll play alongside the Top 16 finishers from the Players Tours Finals in just a matter of weeks. pic.twitter.com/3ZIythCNKS

That's it for us today. Coverage of the Top 8 begins Saturday morning at 9 AM PDT on twitch.tv/magic!