Players Tour Online 1 and Players Tour Online 2 are in the books, but there's two more to follow. The second two of four Players Tour events, held on MTG Arena, kick off this weekend. With $600,000 in prizes total across two weekends—June 13-14 and June 19-21—and a new Standard metagame to refine, the final weekend of Players Tour broadcasts will create moments and crown champions around the world.

Coverage will be streaming at twitch.tv/magic. With two Players Tour events happening each weekend, there's more than 30 hours of live video coverage across Friday night, Saturday, and Sunday to watch.

Plus, you can watch the Japanese language broadcast for Players Tour Online 3, featuring MPL players Rei Sato and Ken Yukuhiro at twitch.tv/mtgjp.

Get the latest match-by-match updates are each Players Tour event through our events hub and by following @MagicEsports on Twitter. Each Players Tour has a unique hashtag for you to follow and cheer for your friends in:

When Will Decklists Be Published? Will There Be Open Decklists?

Decklists will be available and open to all competitors throughout the event. We'll post decklists for all players at the start of each event. Additional metagame information provided by the coverage team will be published throughout the weekend.

There’s a full schedule of coverage—kicking off with the start of the first Players Tour each weekend—on twitch.tv/magic to watch, featuring many of your favorite casters. 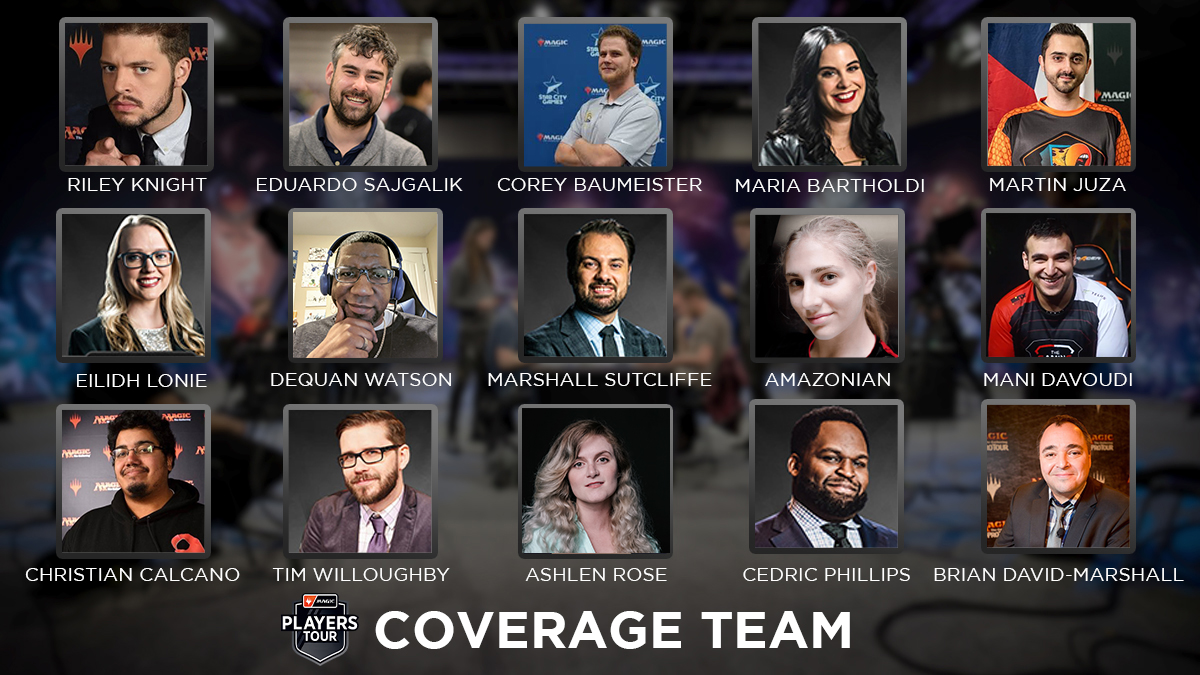 Be sure to follow along each weekend to catch both the Players Tour broadcasts.

Over 1,000 players are invited to these online Players Tour events. The invitation list includes 24 members of the MPL, 32 Rivals League players, and hundreds of qualified competitors from around the world.

You can see the complete list of players invited to the Players Tour here.

Competitors qualified for the Players Tour may choose and play in only one Players Tour event, choosing the best date and time for them.

What Is the format?

Standard Constructed is the format for these Players Tour events, across Swiss rounds and the Top 8 playoff.

Day One and Day Two—Swiss

Players battle it out across nine rounds of Standard Constructed.

There is a cut at the end of Day One. All players with 15 or more match points will advance to Day Two.

All matches are a best two-out-of-three games.

Players compete in six more rounds of Swiss. The Top 8 players after the completion of 15 rounds will advance to Sunday's single-elimination playoff.

The Top 8 players compete in a single-elimination tournament, seeded in a bracket by final standings after 15 rounds.

All matches are a best two-out-of-three games.

Following Twitch's Content Sharing Guidelines, you can co-stream the Players Tour broadcast from twitch.tv/magic using OBS or XSplit. This allows anyone on Twitch to cover the event in their voice and with their community. To be clear, co-streamed content is not endorsed by Wizards, and we expect anyone who participates in co-streaming to follow Wizards' Fan Content Policy.

Each Players Tour event has a prize pool of $150,000, paying out down through every competitor.

What Does the Players Tour Lead to Next?

All players that finish with 33 or more match points after Round 15 will qualify for the 2020 Players Tour Finals the weekend of July 25, 2020.