The Challenger Gauntlet may have been filled with players not yet qualified for the Rivals League next season, but the field of 24 was nonetheless filled by some of the best Magic players of the past year. Each of the competitors had already made a deep Championship tournament run, which is what brought them to the Gauntlet. After 12 rounds of Swiss play wrapped, we have a cut to the Top 12, who guarantee themselves a Rivals League berth and will return tomorrow for a chance to qualify for the Magic World Championship.

Congratulations to the #ChallengerGauntlet Top 12!

They'll return tomorrow to battle for the four World Championship invites, so tune in at 9am PST at https://t.co/GF4H5s6srS pic.twitter.com/hARMVytVeQ 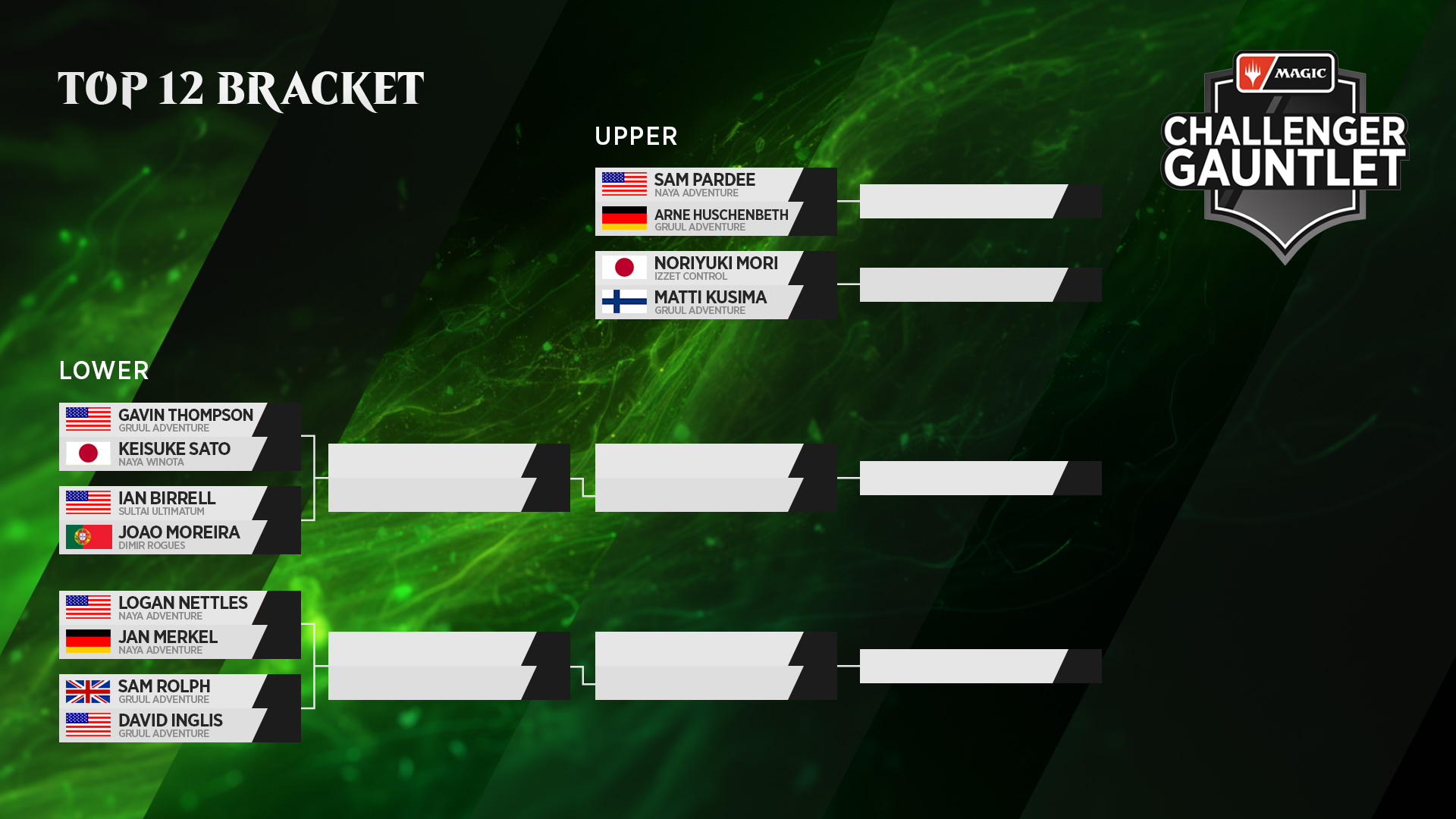 Because of how the Top 12 bracket plays out, there was huge incentive for players not just to qualify for Sunday – seven wins was the likely target as the day went on – but to finish in the Top 4. That would set up a simple win-and-in on Sunday for a seat at the World Championship, while everyone else would battle it out in single-elimination play for the remaining spots.

Twelve rounds of Historic and Standard play led to a number of key matches in the final round – here's how the final 12 who will advance to Sunday shook out.

First, the four players who will advance to the World Championship qualification matches directly:

Three players – Noriyuki Mori, Sam Pardee and Arne Huschenbeth – entered Day Two at 5-1, with a handful of players behind them at 4-2. That meant that there would be plenty of drama throughout the day as the final 12 sorted itself out. Matti Kuisma was the first to break out of that 4-2 group, and along with Pardee was the first to break the nine-win barrier.

Mori quietly made his way up the ladder as the tournament went on. He entered Saturday ahead of the pack and showed a mastery of both formats on his way to an 8-4 finish and now a direct shot at a World Championship seat.

The final member of the Top 4 took a little extra work to decide, as Huschenbeth went to a tiebreaker match with Gavin Thompson, who won the last round in dramatic fashion to force the extra frame. It was undoubtedly one of the best contests of the day and went all the way to the third game of the third match to give us a winner.

The other eight players to make the top 12 were:

Throne of Eldraine will give Standard one last sendoff, as and friends will rotate in the coming months, but it will be well-represented on its way out. Sato's Naya Winota deck was one of the best-performing Standard decks of the weekend, so there's still plenty of Magic left to be played.

Jeskai Control was the deck to beat in Historic, and seven of the Top 12 were playing the most popular deck in the field. Indeed, Jeskai was home to two of the three 5-1 Historic performances in the hands of Sam Pardee and Matt Kuisma.


The other 5-1 Historic performance belonged to Ian BIrrell, who was the only player to bring Selesnya Company to the tournament.

On the Standard side of things, Gavin Thompson paced the field with a perfect run with Gruul Adventures before narrowly falling in the mirror in the Top 4 tiebreaker, but it was Keisuke Sato who shocked the field the most, piloting Naya Winota to a 5-1 finish and then winning a Top 12 tiebreaker match with the aggro-combo brew. All told, he went 7-2 in matches with the deck, an encouraging sign heading into Sunday's Standard Top 12 play.

There was unquestionably no better testing team than that of Matti Kuisma, Arne Huschenbeth, Sam Rolph and Davis Inglis. All four played the same Gruul Adventures deck in Standard, and three of the four brought identical Historic decks.

Even after a strong Friday performance, the group didn't get much sleep. Instead, they huddled up to review their matches from the day. The hard work paid off, as all four made it into the Top 12 after Inglis decisively won his tiebreaker match to squeak in.

"We also had a bunch of help from everyone on our Strixhaven testing team, especially Simon Nielsen and Karl Sarap," Inglis explained. "We all made the top 12 and two of us are in the Top 4 going into tomorrow, which is exactly the sort of result we were looking for. I'm already ecstatic, and if we can get at least one person into [the World Championship] tomorrow that would be the icing on the cake."

All 12 competitors returning to play Sunday have already secured their spot in next season's Rivals League. But there's more on the line when play begins at 9 a.m. PST on Sunday, as the rivals return to try and earn their spot at the Magic World Championship. Full coverage of the Top 12 can be found at twitch.tv/magic.