The Challenger Gauntlet began with 24 competitors, all of whom qualified for this weekend's massive tournament with major stakes. The first cut came after Saturday and 12 rounds of Swiss play, then the Top 12 qualifiers advanced to Sunday play with the top four seeds advancing directly into a World Championship qualifier. It ended with four players punching their ticket to the biggest tournament of their lives, while the rest of the Top 12 guaranteed themselves a Rivals League invitation another chance to push for a World Championship berth. Here's how we got there. 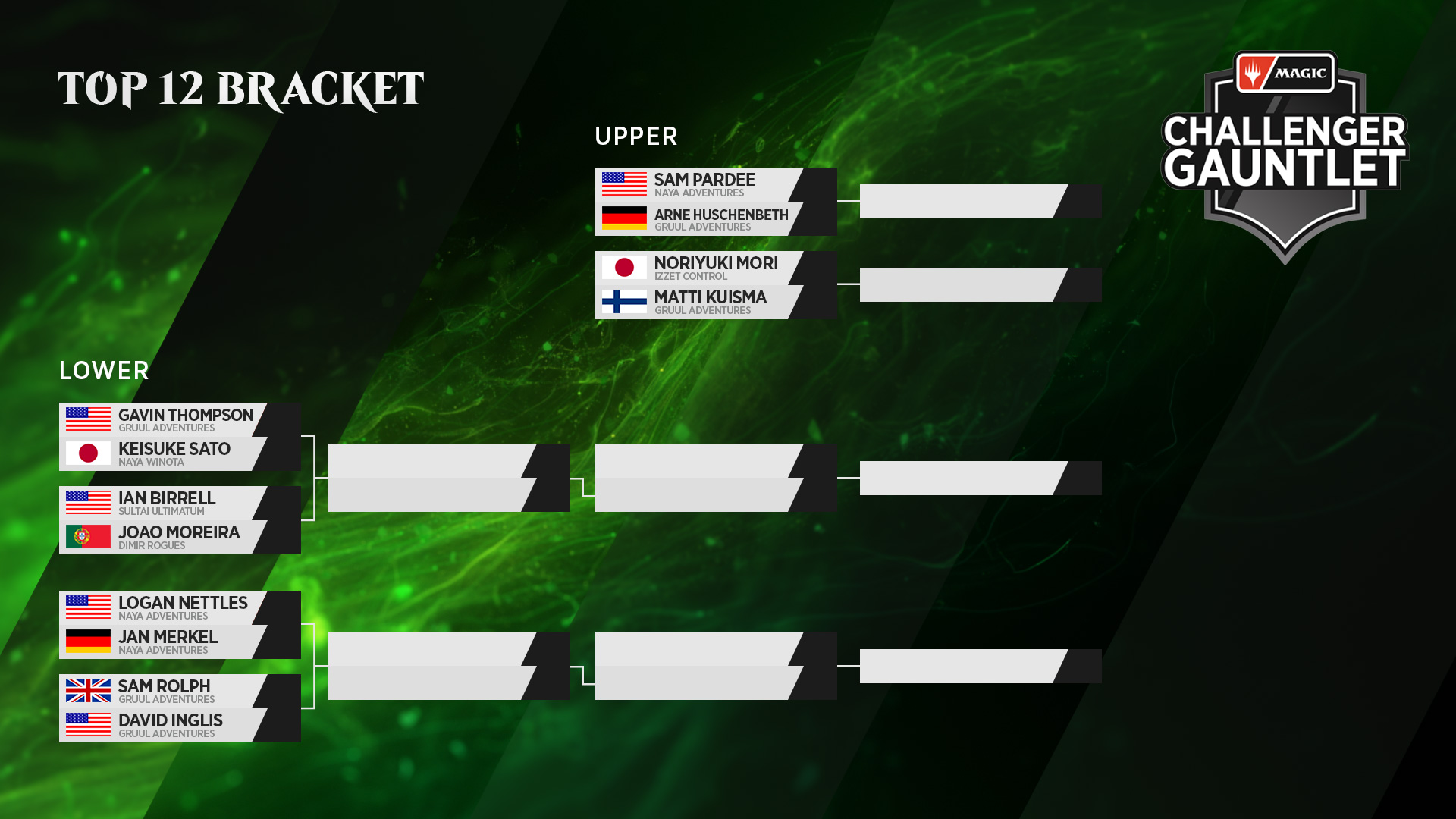 Two of the top four – Sam Pardee, Arne Huschenbeth, Noriyuke Mori, and Matti Kuisma – would qualify directly to the World Championship, while the two who lost would move to the final of the lower bracket, where they would have a second chance to qualify against the survivors of the elimination matches.

It was there that Sunday play began, and it went fast as Keisuke Sato continued his brilliant Standard run. After making the Top 12 via a successful tiebreaker match, Sato had left behind his struggles in the Historic portion of the tournament and was hoping to build on his 7-2 Standard match record in the single-elimination bracket of the Top 12. That's exactly what he did. Sato's Naya Winota brew dispatched Gavin Thompson's Gruul Adventures – the deck of the weekend – in two straight games to move on.

In the next round he would face either Ian Birrell's Sultai Ultimatum or João Moreira and his Standard staple Dimir Rogues list. The Rogues list has the flexibility to compete with anything in the metagame with its flexible draws, but Moreira deck failed to line up against Birrell and the American took the match in two straight games.

That set up another elimination match – the loser would be done playing for the weekend, while the winner would advance to a World Championship qualifying match. Looking to continue his hot Standard run, Sato again turned to , banking on the deck that had recently picked up (to ramp to Winota) and from Adventures in the Forgotten Realms. And in the first game, Winota showed its power.

That was enough to take the first game, but Birrell fought back in the second, stalling the game and then riding until he was able to deploy to tie things up.

But the day belonged to Sato – after a weekend of coming from behind the 12th seed did it again, upsetting Birrell and advancing to a qualifying match.

On the other side of the elimination bracket, things started off with a stacked match: the fearsome online-turned-paper competitor Logan Nettles squared off again Jan-Moritz Merkel in a match with six Top Finishes among the two players.

Merkel has stormed back to Magic over the past few years after a long break following his Pro Tour win 15 years ago. He won the Magic Online Championship Showcase early in 2021 to qualify for the Strixhaven Championship, and now found himself live for a seat at the World Championship.

That run continued at the Gauntlet. He knocked off Nettles in three tight games to stay alive and advance to meet David Inglis, who was fresh off eliminating his teammate Sam Rolph in three games of their own. Along with Kuisma and Huschenbeth, the pair had tested together and all four members made the Top 12, though Rolph and Inglis's first-round meeting meant that at least one spot would go to another competitor.

Merkel's Naya Adventures deck was build to have an advantage in the pseudo-mirror that Inglis's Gruul Adventures list, but things did not according to plan for the German star. Inglis's deck curved out in two lopsided games, and a clutch proved to be the difference-maker that send Inglis to the qualifying match.

With that, the lower bracket was done, and all that remained were four matches to determine who would qualify for the World Championship and who would be back in a month to try again at the next Gauntlet event.

Things kicked off with a pair of favorites when the weekend began: Pardee was one of the most accomplished players in the Top 12 field, and Huschenbeth has championship experience of his own and has been on fire this season.

But that run came to an end against Pardee, who just like his deck was firing on all cylinders. Huschenbeth started the first game off strong, but Pardee was able to utilize a as the perfect combat trick to begin climbing back into the game.

Despite multiple s prepped to draw him deep into his deck if he could find an adventure spell, Huschenbeth missed for multiple turns as Pardee slowly inched his way back into the game. With an off the top, Pardee was able to complete one of the most impressive comebacks of the day.

Pardee wasn't to be denied – in the second game he found a key to take command of an otherwise even board, and a few explosive turns later Sam Pardee was the first to qualify for the Magic World Championship, while Huschenbeth would drop down to the lower bracket for his second try.

The next qualifier came between the other two top-seeded players: Mori and Kuisma. While Kuisma was part of the testing team that had taken the tournament by storm, Mori went the other direction and worked on his own Standard deck for the event, while also completely adjusting his sleep schedule in the weeks leading up to the tournament so he would be fresh even in the early morning hours in Japan.

Kuisma struck first. Mori tapped out on his turn, stranding a in his hand and allowing Kuisma to resolve the fearsome , which carried him to victory a few short turns later.

With his back against the wall, Mori sideboarded in more removal for Kuisma's aggressive adventures deck, and clawed back against a land-heavy Kuisma in the second game. The game once against showed the power of , and the victory set the stage for a decisive third game.

Again the players traded resources early, but Kuisma managed to stick a and , enough to threaten Mori's dwindling life total of 9. But was once again key, and it bought just enough time for Mori to stabilize the board and then fire up to set up a massive lethal attack that sent him to the World Championship.

"I would like to thank everyone who supported me," Mori said after his victory. "It has always been my dream to qualify for the world championship, and today I accomplished that dream."

There were still two seats left to award, and Kuisma and Huschenbeth would get another chance to join the party. They matched up against Keisuke Sato and David Inglis, respectively, with everything on the line. It was the second Sunday matchup against a teammate for Inglis, and the friends were meeting in the Gruul Adventures mirror.

The games themselves were long, drawn-out affairs that featured more than their share of combat math, as Huschenbeth quipped before his games today. The board stalled out quickly in each game, but both times it was Huschenbeth who was able to navigate the tricky boardstate and claw ahead. A pair of s were the difference-maker in the decider, and when a critical allowed the German to Stomp out Inglis's reach creatures, he punched his ticket to the World Championship on his second try.

As memorable as Huschenbeth's victory was – completing his run from PTQ earlier this season to victor of the Kaldheim Championship to qualifying for the World Championship – it was his interview immediately following that cemented a perfect weekend.

Three World Championship seats had been claimed, and just one remained; Matti Kuisma was taking his second shot after a dominant Swiss performance, while Keisuke Sato was trying to complete the miracle run that began with a Top 12 tiebreaker match to even make it to Sunday.

There was no better way for the Challenger Gauntlet to end than with a three-game match, and that's what the pair delivered. Kuisma cruised to victory over a mana-tight Sato in the first game, but ran into mana problems of his own in the second, when he eventually stalled out with nothing but lands and s with no target to equip, opening the door for Sato to steal one and force a third and final game.

In the last game, it was Sato who found himself in trouble early. Kuisma developed a large board that included , and , while Sato found himself with a hand of expensive cards and no fourth land to cast them.

With his hand unlocked, Sato was ready to grind it out. And the longer he stalled the board, the closer he got to setting up a huge turn for . When that turn finally did come, it was more than enough to complete Sato's World Championship run.

That wrapped up the Challenger Gauntlet, with the following four players heading to Magic World Championship XXVII.