It's time to go on an adventure!

Welcome to the Commander Legends: Battle for Baldur's Gate Prerelease Primer. This Commander-focused set brings us back to the world of Dungeons & Dragons . . . but this time, we're in the seedy city of Baldur's Gate. Heroes are just as common as back-alley deals. Who knows what you might find?

And the best place to check it out for the first time is the Prerelease!

What is a Prerelease and where can you find one? Let me tell you about it! It's a little different this time around, so whether you're an experienced or fresh player, you'll want to listen up!

To hear about a lot of this in video form, check out my Good Morning Magic episode:

Prereleases have always been my favorite Magic weekends of the year.

During Prerelease weekend, you have a first chance to get your hands on the new set, and to me, the heart and soul of the Prerelease experience is the energy of getting those cards and playing with them. Whether you're doing that at home or in a store, you'll be doing it with so many other people around the world as part of the global experience and conversation. Thanks to the internet, we're all connected!

The Prerelease of a set is great because the set is totally new, the footing is equal as everybody plays with the set for the very first time, and you just get to relax and have fun exploring the new cards. There's a lot of laughs, learning, and great games; it's a lot of fun for old and new players alike!

If you're a veteran of Prereleases, you may want to skip ahead to the next section, where I talk about what you can expect for Commander Legends: Battle for Baldur's Gate. But if you're new to the world of Prereleases, or are maybe just looking for a few extra pointers, read on!

All right. So, let's go over perhaps the most important part: finding product for your Prerelease! After all, you can't very well play if you don't know where to get the supplies you need.

You'll need to get in touch with a store. If you don't already have a local shop you frequent, be sure to check out the store locator to find one near you! That store may even offer preregistration. Prereleases are some of the most popular events we put on, so be sure to check and see if the store preregisters. Be sure to plan ahead.

While traditionally Prereleases are run as in-store events, players can pick up product and take it home due to COVID-19. We expect some stores will be running in-person events and others will be running virtual ones. In different areas of the world, different rules and restrictions may apply to what can be open, so please take appropriate precautions, be aware of government-level requests, and do only what you feel comfortable with.

Okay now, let's see. You have a store selected, and you've taken a look at all the awesome cards in the Commander Legends: Battle for Baldur's Gate Card Image Gallery.

You're all set and ready for this Baldur's Gate adventure. Now it's time to open some of those cards!

Like other sets, Baldur's Gate has Prerelease Packs. But they're a bit different this time around. 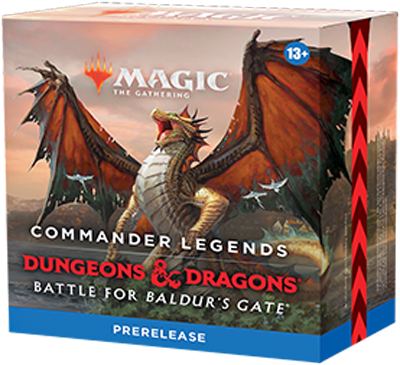 These Prerelease Packs are made for Draft and contain the three boosters you'll need to draft—and plenty of other good stuff, too.

Let's crack one of these open and see what's inside:

If you want to see me open one up and go over all the fine details, you can also check out my video above!

And, of course, front and center are those booster packs.

Now, if you've been to a Prerelease before, you might be used to playing Sealed Deck. Commander Legends: Battle for Baldur's Gate is a bit of a different story.

Because Commander Legends: Battle for Baldur's Gate is a product designed for drafting, we wanted to show that off at the Prerelease! So, unlike your normal Sealed Deck, you'll be drafting.

In a normal eight-person draft, you open one of your packs, select a card, put it face down in a pile in front of you, then pass the rest of the pack to your left. You then pick up the next pack passed to you and repeat this process. At the end, you'll build your deck out of what you picked.

My biggest drafting tip is to keep in mind you're likely only going to be able to play two colors at the end of the draft, maybe three. So, I'd try and find a legend (or legend and Background pair) you like early on, and then draft around that. You'll always have access to your Commanders, so you can build around them as you're drafting, too! For example, if your Commander is Lozhan, Dragons' Legacy you're going to want to prioritize Adventures and Dragons a bit higher. 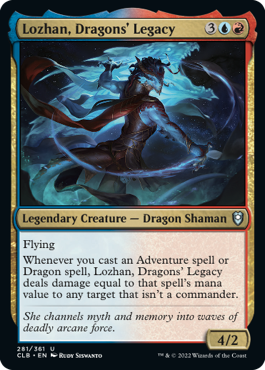 Beyond that, I recommend prioritizing card draw and ways to accelerate your mana, like artifacts that make mana. Those are the two backbones of the Commander format, and you're definitely going to want to do both.

And, of course, plenty of sweet creatures! Creatures with evasion, like flying, are especially important: they help ensure you can still attack when the board gets clogged up. But unlike a normal draft, Commander Legends: Battle for Baldur's Gate Draft is much less aggressive, so don't worry about needing to curve out perfectly.

But if you just take cards you like in two colors, there's a good chance it'll be fine! Commander is a fun multiplayer format with plenty of in-game politics, so even if your deck is a bit slow, you'll be totally fine—and maybe even advantaged!

With your 60 cards, you're going to want to play 25 or so lands. Hitting your land drops—having a land to play each turn—is really important in Commander, so as much as you'll want to jam in all those sweet spells, make sure to save room for lands!

While a mana curve is less important in Commander, it's still something to consider. Here's how I'd recommend going about it.

First, lay your creatures and artifacts out in mana-cost order. This helps you see what you're going to potentially be able to cast at each part of the game. (Don't lay your instants and sorceries out at this point unless they're cards you're planning to play as soon as you have that much mana; for example, you will generally cast a Roving Harper on turn three, whereas Blur isn't usually a turn-three play.)

A good mana curve of creatures is crucial to a successful Sealed Deck—you don't want to have a ton of cards at any single spot in the curve. It's important for you to have a good mix so you can play your cheap spells in the early game and your expensive spells in the late game. As a very general rule for Commander Legends: Battle for Baldur's Gate Limited, I would look to play something like this:

And while factoring all of this in, be sure to keep your Commander in mind, too! If you're always casting your Commander on turn three, then it means you have a much lower need for a ton of three-drops: your Commander always gives you an option!

Now that you have your core creature base figured out, it's time to add in spells! Pick favorites among your colors to bring your deck to 34 or 35 cards, and then you're good to go from the spell side.

If you want to learn more about mana curves, you can also check out my article How to Build a Mana Curve, though, it's focused more on one-on-one gameplay than Commander.

What would D&D be without some exciting treasures to find? As you open your packs, you might see some special card treatments. Let me run through what you can find.

First up are foil-etched legends! This popular treatment returns, and every legendary creature and Background in the set has one. 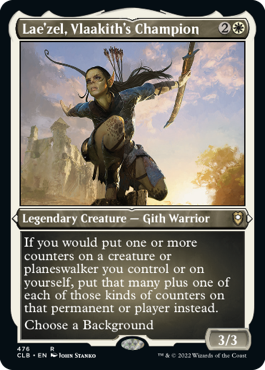 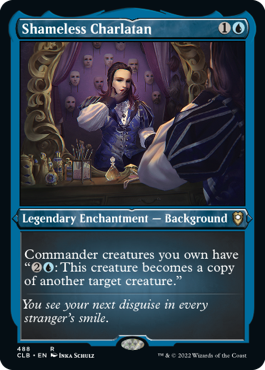 The three planeswalkers of the set also have borderless versions: 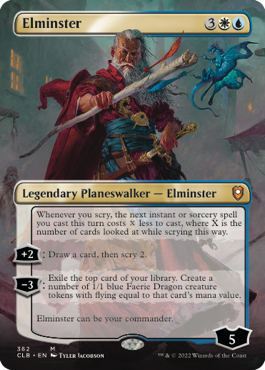 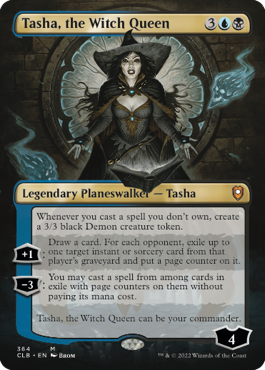 On top of that, ten other mythic rares have this snazzy borderless treatment: five of the mythic rare Dragons, plus five other cool mythic rares. 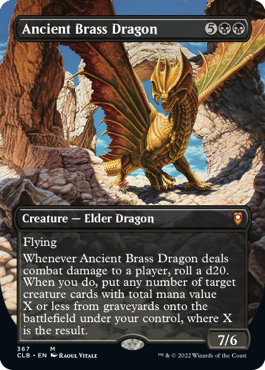 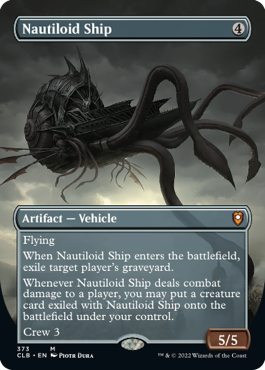 You might also remember the rulebook frame from Dungeons & Dragons: Adventures in the Forgotten Realms. Well, it's back! Inspired by Monster Manuals of the past, 76 cards appear in this frame: all the legendary creatures, plus some other cool cards. 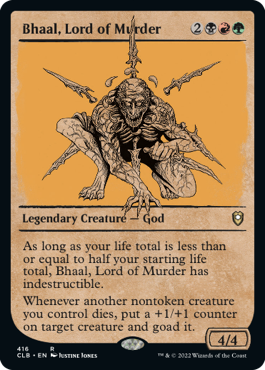 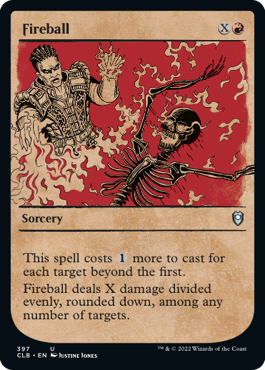 For more information on all the treatments and exact details, check out our Collecting Commander Legends: Battle for Baldur's Gate article!

While you're at your store to pick up Prerelease Packs, you can also buy other things, like booster boxes of Set and Collector Boosters! Be sure to call ahead to preorder one, and while supplies last, you should be able to pick one up.

When you grab a box from your local game store, you can also grab one of these (while supplies last) to boot: 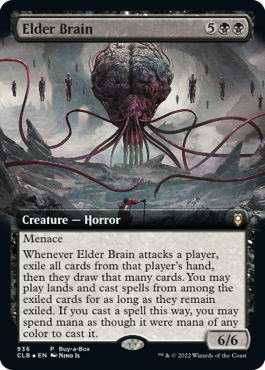 Battle Beyond the Store

The Prerelease is all about visiting your local game store. It's a great experience that supports them, but it's worth noting that Magic is available other places, too! For example, if you don't have a local game store, you're still going to want a box to draft with your friends. 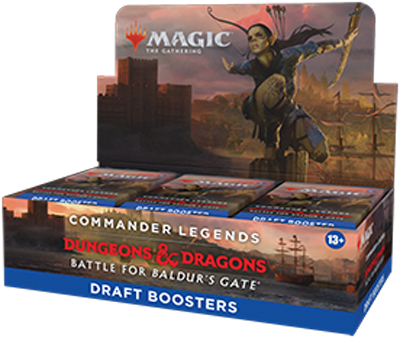 You can pick up a box on Amazon and prepare for a draft night with you and seven of your friends. To check out the many other ways to enjoy the set, like Set Boosters, Collector Boosters, Commander decks, and more, be sure to take a look at the product overview.

There are a variety of mechanics in Commander Legends: Battle for Baldur's Gate, and I have videos covering them all! Matt Tabak and I run through why they're in the set, how they work, and how to best use them. Check them out!

Commander Legends: Battle for Baldur's Gate is a blast of a way to play Commander, and I can't wait for you to see what Baldur's Gate has to offer!

But what do you think? If you have any questions at all, feel free to hit me up on Twitter, Tumblr, Instagram, TikTok, YouTube, or even by sending an email to BeyondBasicsMagic@gmail.com. I'd be happy to hear from you!

Enjoy your time in this city—and have fun building your own legends.