As iconic as Magic: The Gathering itself, is a card you are more likely to see in a display case rather than on the battlefield.

Each year hundreds of players around the world defy that expectation by bringing the most powerful cards in Magic's history to the Vintage Championships at Eternal Weekend. In North America, Europe, and Asia these players forged powerful artifacts in , bartered with necromancers in the , and tapped into the best cards of the past with . Competitors battle for the coveted title of Vintage Champion, beautiful original artwork, and their place in Magic's history.

For 2020, Eternal Weekend was moved to Magic Online and three events took place in one action-packed weekend. Granting entrants access to nearly every card, Magic Online ensured there were no barriers for competitors to build the deck of their dreams. Players who may never come across a in real life could cast them for the first time, setting Eternal Weekend 2020 up to be the one of the largest and most competitive weekends of Vintage events to ever occur.

Of course, there's more to Vintage than simply casting the most powerful spells available. Understanding how the three Vintage Championships played out begins with looking at what we knew about the format going into the weekend.

With so many powerful cards available, how can the Vintage format be balanced? Magic's historic and powerful cards appeared as both powerful threats and powerful answers. Over the past five months, the Vintage community has compiled results from more than 18,000 premier-level Magic Online matches. The data shows a story of balance and harmony, and no single archetype has a dominating win rate or metagame share.

With the largest card pool to access and endless options available for deck customization, the Vintage community categorizes decks into familiar archetypes.

"Shops" refers to decks that use to power out artifacts faster than normal. These decks employ either an aggressive or a "prison" style game plan. Bazaar strategies use the Arabian Nights land to turn their graveyard into a resource. These strategies vary between Dredge, Hogaak, and free spell variants.

Xerox decks, an old school Magic term for cutting lands and playing cheap draw spells instead, cover all the blue-based decks that rely on and restricted blue spells to gain card advantage. These decks are flexible and can fulfill aggro, control, or combo game plans based on deck configuration and color choices.

The Combo archetype contains a variety of dangerous one turn kill combo decks including , and the decks with and Storm.

The final major archetype are the decks. This card, banned in Legacy, can facilitate fair decks that attack the opponent's mana base.

These archetypes exist in relative balance where the various strategies keep each other in check. A Xerox deck may be able to shut down a Combo or Deathrite Shaman deck but it will struggle when up against a deck using . The Bazaar deck might be powerful against Xerox but it struggles when confronted by the s in Shops and decks. As such, these extremely powerful decks coexist in a cyclical metagame where the best deck can change week to week based on which deck was successful over the previous weekend. Going into Eternal Weekend 2020 the community expected to see large numbers of players gravitate towards these powerful archetypes, but no one knew who which one would come out on top. 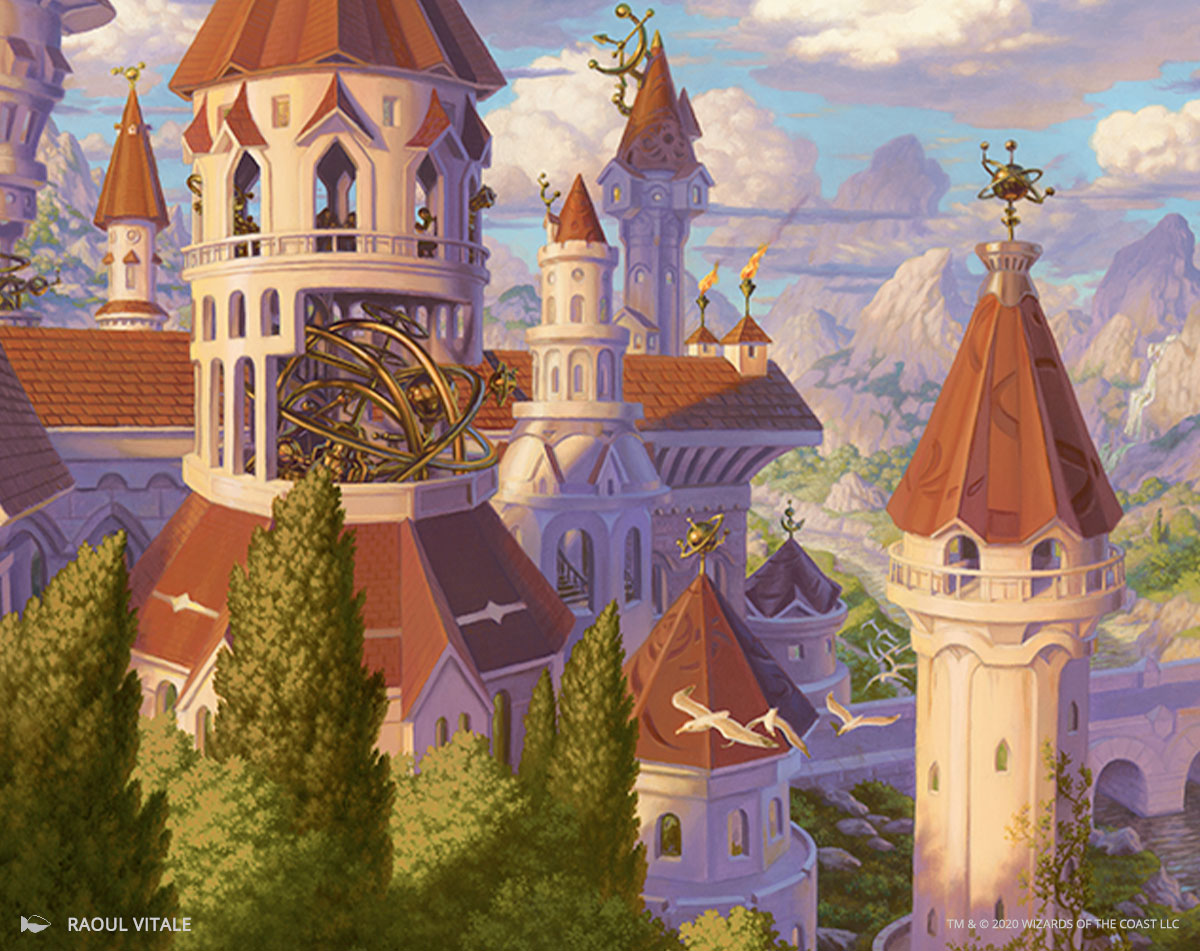 256 players registered for the first Vintage Championship of Eternal Weekend 2020, making it the largest online Vintage event ever. Nine rounds of Vintage resulted in a diverse Top 8. A playoffs containing blue Xerox, Mishra's Workshop, and Deathrite Shamans made for an interesting finale.

A peek at the Top 8 decklists finds a unique take on Grixis by MartinMedMitten. Martin's deck featured the new Zendikar Rising card , surrounded by the format's most powerful spells. Even the newest Magic cards make a splash in its oldest format.

On video there's a trio of intricate blue versus blue matchups where I was competing in the Tolarian Academy Championship, but fought an uphill battle against Grand Prix Bologna 2019 Champion Marc 'baby' Vogt. Check out the complete match to see how pivotal sideboard cards can reshape a matchup.

In the semifinals, Vintage regular and NYSE Open VI Top 8 competitor Amir 'Amiracle' Akhundzadeh took on Gernardi. Both players brought Dreadhorde Arcanist Xerox decks but with different supporting colors. It's a technical matchup worth seeing for yourself.

The tournament concluded with 'burrarun' attempting to go blow for blow with Akhundzadeh. Faced with what many would consider an unfavorable matchup, 'Burrarun' managed to vanquish their opponent to become the first Vintage Champion of Eternal Weekend 2020. 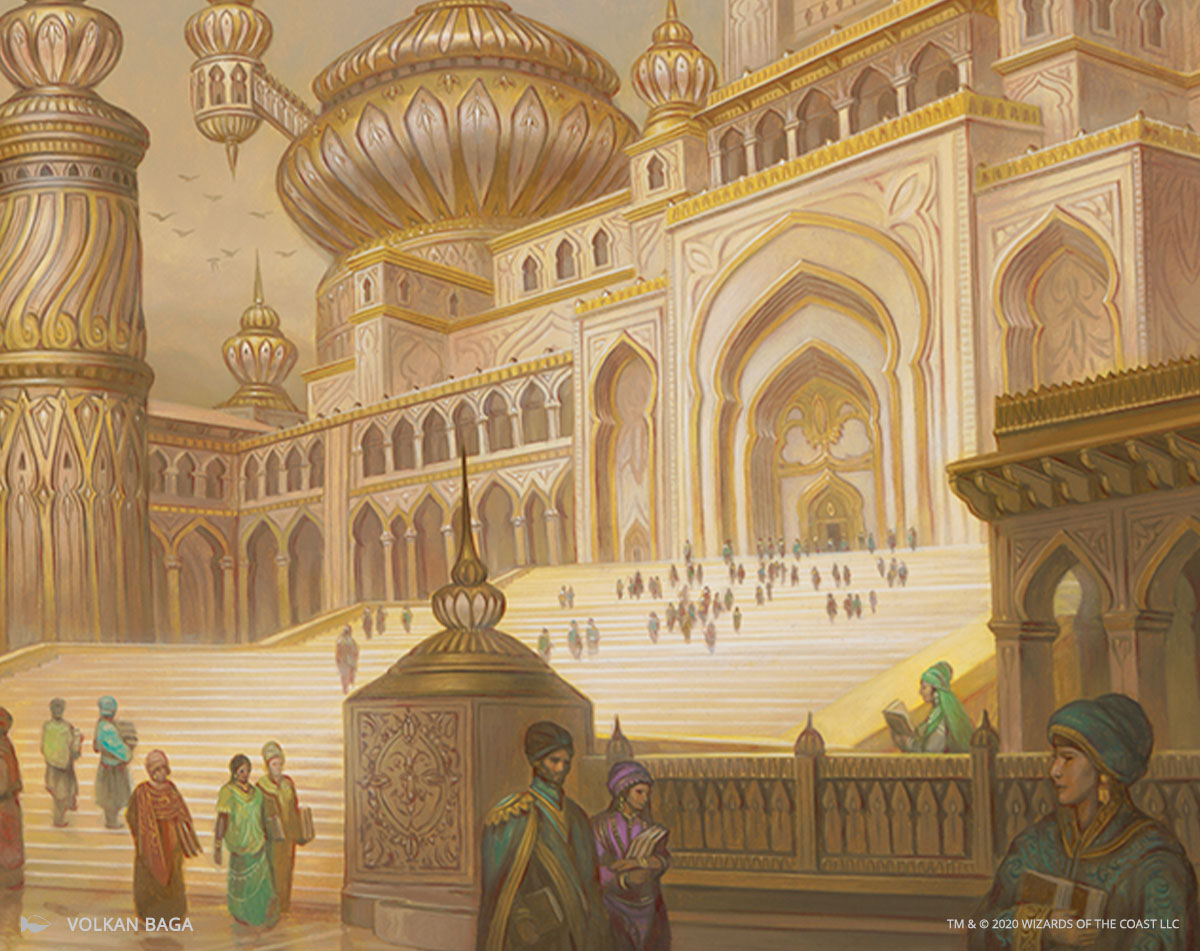 Not to be outdone by its predecessor, the Library of Alexandria Vintage Championship broke the newly set Magic Online Vintage event attendance record. 391 players began a 10-round trek through the Vintage metagame. was suspiciously missing from the Tolarian Academy Top 8 but not here, as two distinct Bazaar decks made Top 8. Looking at the Top 8 we can see a few familiar names, including Kevin Cron. This tournament was Cron's fourth Eternal Weekend Top 8 having done so in 2003, 2004, 2012, and now 2020. It's difficult to have such continued success over such a long span. Congratulations to Kevin Cron!

Round 8 brought us an incredible match between Temur Xerox and Paradoxical Outcome where two of the eventual Top 8 competitors battled all the way down to the last second. If you want to see fighting a Wrenn & Six emblem look no further!

The quarterfinal match featured what might be the most off-metagame deck to Top 8 an Eternal Weekend in recent memory. Streamer Ryan 'WingedHussar' Waligora brought a unique take on the Bazaar variant called HollowVine. This deck does away with the s and instead plans on recurring and while using and to play free spells like , , and .

In the finals Micheal 'Wizard_2002' Bearmon's Dredge deck faced some stiff competition in the hands of Pro Tour competitor Immanuel 'Gerschi' Gerschenson's Doomsday deck. Doomsday has emerged as a top tier archetype in Vintage after the printing of in Theros Beyond Death. This power boost wouldn't be enough to defeat Bearmon and as he became the second Vintage Champion of the weekend!

I was on Sultai Midrange up until about an hour before the event. It seemed like that deck had a huge target on its back though, especially since it won the previous EW for Academy. I also didn't feel confident playing it in a 10-round event. I had reps in with Dredge, and my goal was to Top 8 the event, so I played the deck with what I think is the most powerful game plan if it's not disrupted. I noticed also that graveyard hate seemed low, and Dredge is best when that's the case.

. I love the old frame, and I started playing around Odyssey (though no tournaments until Onslaught or so).

It's hard to put into words. It doesn't feel real. I never really made a run at the Pro Tour because they didn't have Eternal format PTQs, and I was primarily a Legacy player growing up. I've found Vintage to be more fun than Legacy right now though, so I've been spending a lot more time with it.

I think the gameplay is really varied and you have matches that you can't have in any other format. I kind of feel like this is the culmination of who I am as a player right now—like I've been steadily getting better, but wasn't good enough to Top 8 a big event. Then I Top 8'd some Challenges and one of the Magic Online PTQs, but I wasn't good enough to win them. It feels great to finally break through. 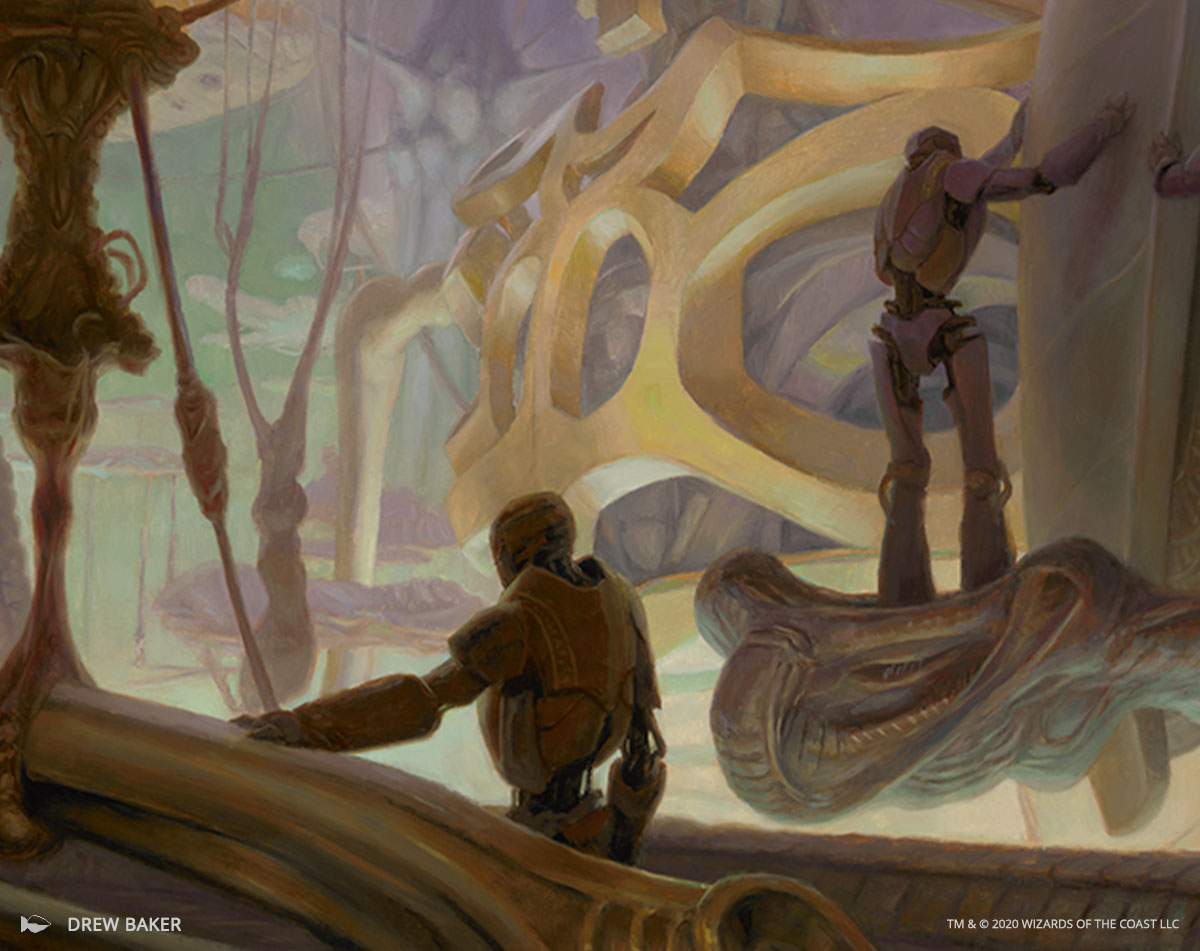 [Editor's Note: The following statement was provided by Wizards of the Coast staff regarding the results of the Mishra's Workshop Championship.]

"After the conclusion of Swiss and Top 8 play, user ecobaronen was disqualified without prizes from the Mishra's Workshop Championship.

In Round 10 ecobaronen agreed to a prize split with his opponent ZioFrancone. Per Magic Online tournament policy, prize splits may only be negotiated in the last round of play. Offering a prize split prior to the final round of an event is considered bribery. Players may neither offer nor accept booster packs, rewards, or any other objects in exchange for modifying the outcome of a game or match.

The coverage below and prizes distributed for the event reflect this disqualification."

With a card pool as large as Vintage there is plenty of room to innovate. In Round 2, Eternal community staple James 'CBL_James' Hsu, piloting Sultai Midrange, received a surprise when he was paired versus 'snuffyo_ephemerocate' on Elves! Take a look to see if a rogue strategy took down one of one of the most-played decks in Vintage.

Vintage Champion Brian 'Bosh N Roll' Coval was one of the most familiar names to make it to the Top 8. Coval is no stranger to Vintage Eternal Weekend Top 8s, as the Mishra's Workshop Championship marks his fourth in three years! In the quarterfinals Coval faced off against mattb on Dredge and deployed all the tools his deck provides to stem a zombie tide.

Coval moved on to face Legacy Death & Taxes Expert David 'StaticGripped' Lance in the semifinals. Unfortunately for Coval his Planeswalkers would just become a pitstop for David's robot army. 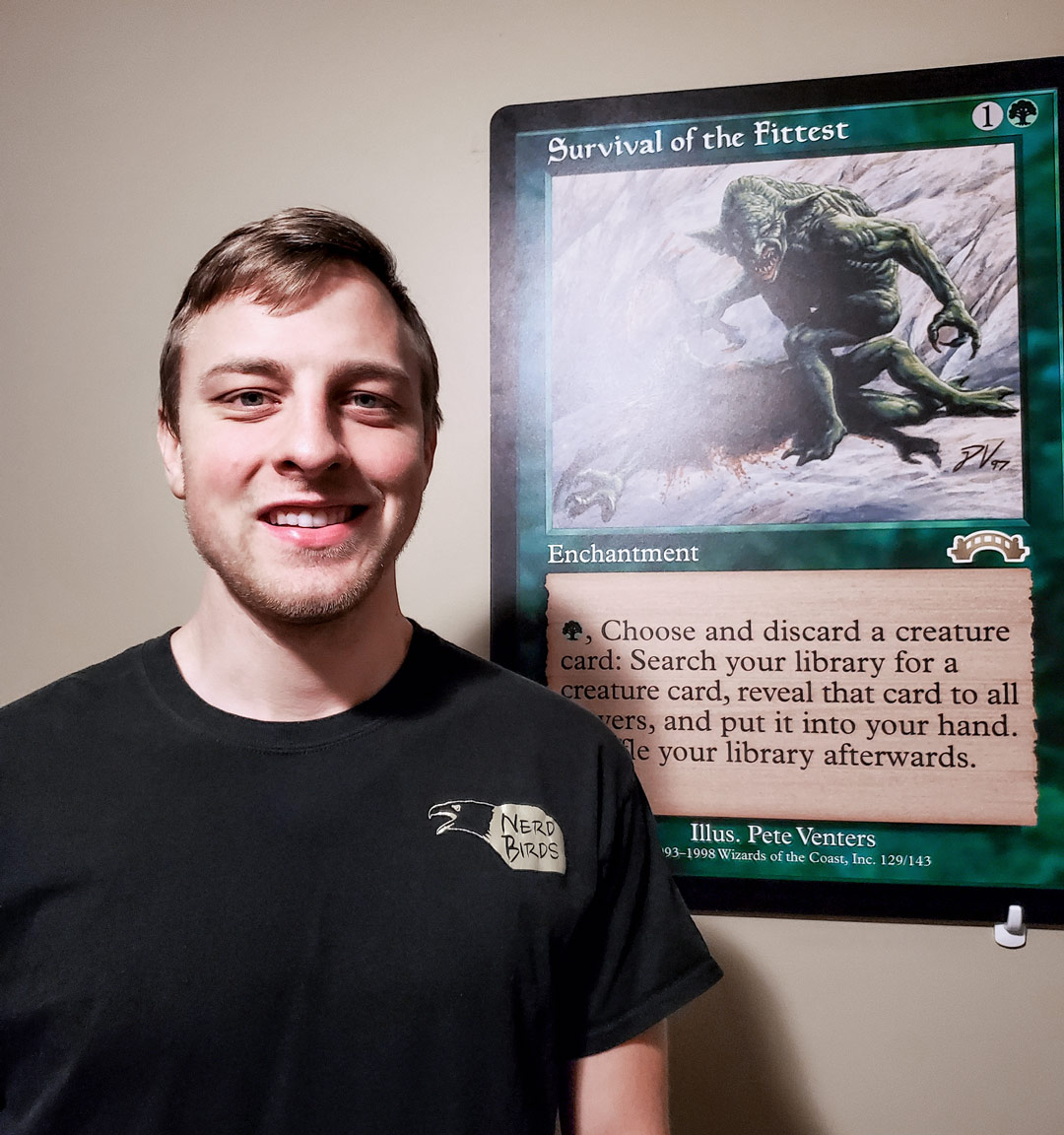 Cyrus Corman-Gill suggested it and he is a smart guy so I ran with it, and I'm a Legacy Death and Taxes player so it came rather naturally.

After making Top 16 in four previous Eternal Weekend events it's absolutely fantastic to get some validation. It was also a huge positive to make up for it being the day I was supposed to be getting married before it got pushed back. Shout out to my fiancé Rachel, the Nerdbirds, and Team Serious!

Over the course of the weekend the Vintage community was able to publicly source the data for both the Tolarian Academy and the Mishra's Workshop Championships. These two events combined over 650 players and more than 2,250 matches to give us one of the most comprehensive weekends of Vintage data.

We saw an extremely similar breakdown to the 18,000 matches from before Eternal Weekend. A diverse metagame spearheaded by Sultai Midrange, Xerox, Paradoxical Outcome, and Golos Shops (Prison). For archetypes and sub-archetypes with a large enough count we saw normal win rates below 54%. From a data-driven perspective it would be hard to draw any conclusion other than positivity about the health of the format.

Xerox and Bazaar decks had the best showing at Eternal Weekend 2020, putting up solid numbers versus a field with many combo and Deathrite Shaman players. Among the Bazaar variants, HogaakVine saw the most play but the best choice for the weekend came in the form of classic Dredge. Not only did it take home a title it also put up a solid win rate among its few pilots.

Eternal Weekend Online 2020 can be described as nothing other than a success. In the face of a global pandemic we were still able to come together in huge numbers to crown three new Vintage Champions. Congratulations again to burrarun, Wizard_2002, and Static_Gripped. Attendance was through the roof, and the engagement of new players was something to be cherished.

I want to personally thank the Vintage Magic community for supporting both the event and stream. I streamed Vintage for 26.5 of the 48 available hours in the weekend and I couldn't be happier. At one point the largest Magic stream on Twitch was one featuring Vintage!

Special thanks to Julian Knab, Annurag Das, Eric Vergo, and all the casters and the production crew without whom we would not have such amazing video coverage. Shoutout to the Vintage Streaming Community who helped do public data sourcing for this weekend and stayed up late to get as much data as possible.