Nearly 500 players came to Barcelona to compete in Mythic Championship IV. With a Modern format in flux, the expected metagame began to form in the week leading up to the tournament. It became clear that decks with Hogaak, Arisen Necropolis were the enemy to beat, and that influenced the deck selections of both players who advanced to the finals.

And both players had gone on incredible runs to make it to the Top 8. On one side sat Alvaro Fernandez Torres, whose Mythic Championship career began just two years ago. He picked up Magic years ago but it wasn't until he moved to a larger city at 18 that he had the opportunity to play competitively. He qualified for Barcelona after placing 14th at the Team Trios Pro Tour 25th Anniversary. His epic run through the tournament with a deck unexpected by many – Hardened Scales – had led him all the way to the finals, and now he had the opportunity to win the Mythic Championship in his home country. 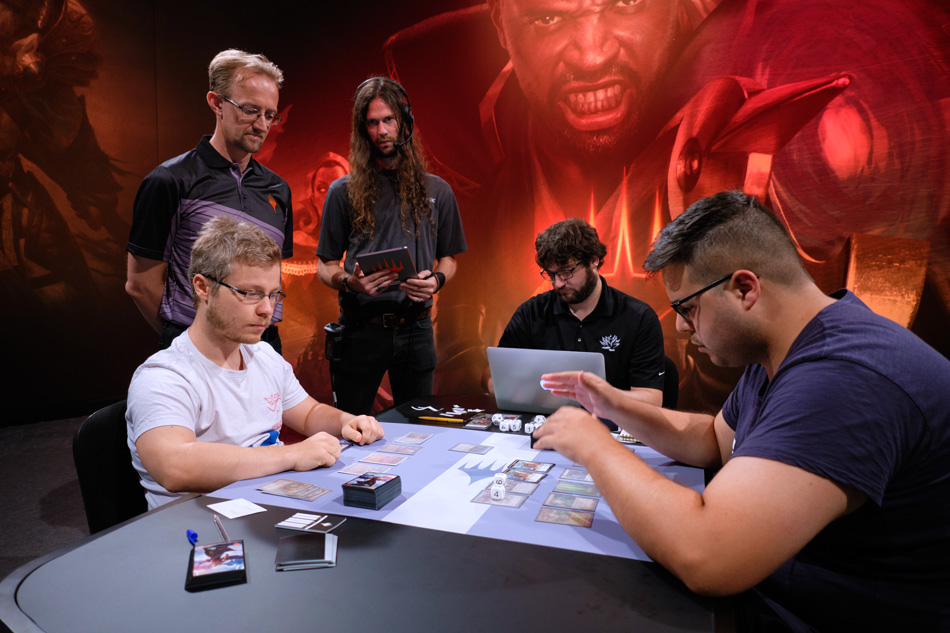 Across from him was Thoralf Severin, a consistent high-level competitor with three Grand Prix Top 8 performances but someone who was still looking for a breakout performance at the Mythic Championship. He accomplished that with this Top 8 and now had a chance to enshrine himself further in Mythic Championship history.

Severin begrudgingly kept his opening 7, while Fernandez Torres had to go down to five, though he owned the right to play first in the matchup. Not that it was a particularly impressive start, as he kept a one-land hand and managed just a pair of Arcbound Workers, while Severin assembled third-turn Tron thanks to Expedition Map.

After untapping, Severin faced his first real decision of the match. Typically, Tron players will slam Karn Liberated as soon as possible, but in this case Severin opted to deploy a Walking Ballista with three counters, picking off the Workers immediately. Fernandez Torres reloaded as best he could, with a Metallic Mimic powering up a Walking Ballista. The players traded Ballista, leaving just a Metallic Mimic for Fernandez Torres. When Severin had Karn followed up by Ulamog, the Ceaseless Hunger the following turn, Fernandez Torres had seen enough and scooped up his cards to move onto the second game.

Fernandez Torres again took a mulligan, while Severin's 7-card hand featured another Turn 3 Tron. But even on six cards, Fernandez Torres' deck was capable of starts faster than that, if he could find the right combination of cards.

His hand didn't turn out to be quite that explosive, but Mox Opal, Hangarback Walker and Arcbound Worker was a good start, especially when it was followed up by the scariest Construct of them all: Arcbound Ravager.

Then came Karn Liberated, which attempted to exile the Hangarback Walker, which turned into two Thopters after being sacrificed to the Ravager. Fernandez Torres untapped and his follow-up Throne of Geth helped him to take down Karn. 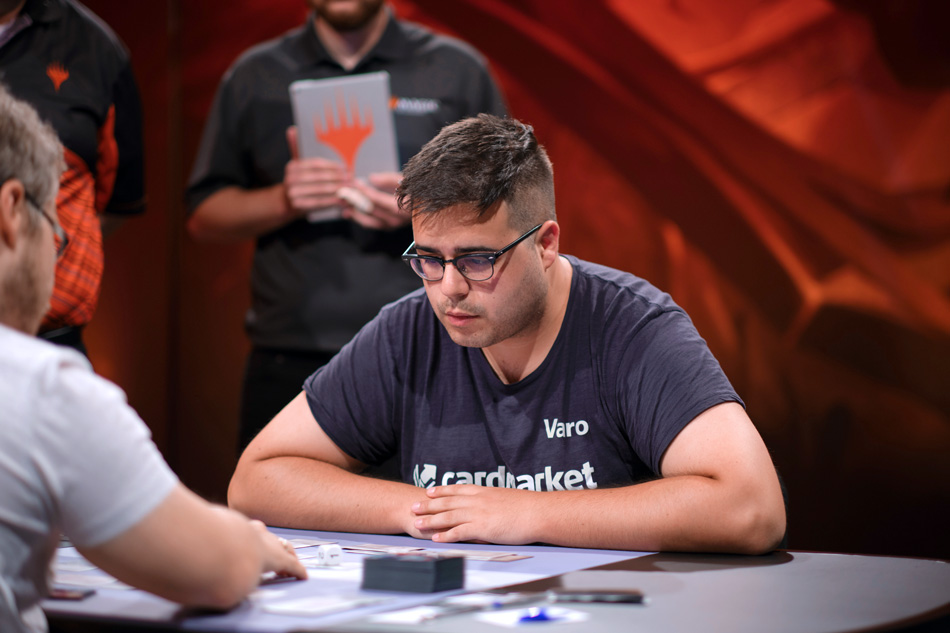 But Severin had been playing the long game all along, and a follow-up Oblivion Stone was deployed to clear the way, though the combination of Arcbound Ravager and Welding Jar meant Fernandez Torres still had ways to fight through. His next attack pushed Severin down to 7 after he opted to hold off on the Oblivion Stone.

Fernandez Torres played Ancient Stirrings in his second main phase, finding Inkmoth Nexus and regenerating Ravager when Severin blew the O-Stone in the end step. That left him with a lethal attacker as well as an Inkmoth Nexus to dump the counter on if Severin had a follow-up Karn Liberated. Despite the turn 3 Karn, Fernandez Torres had actually maneuvered into a winning position.

Unless, of course, Severin instead had Ulamog, the Ceaseless Hunger, which he found waiting on the top of his deck. As the commentators in the booth went crazy, Severin just remarked dryly "I think they may know I just drew Ulamog."

Another game, another pair of mulligans for Fernandez Torres, though he was finally able to open on a Hardened Scales. Severin, meanwhile got things started even earlier, with a pre-game Leyline of the Void. Like clockwork, he deployed two Tron lands and an Expedition Map. But with his only payoff being Walking Ballista and with Fernandez Torres controlling Hardened Scales, Inkmoth Nexus, Arcbound Ravager and Walking Ballista, things were actually quite complicated. That sent Severin digging for new cards, and with his 10 mana he mustered his own Walking Ballista for five.

That was enough to deal with one of the Ravagers, but second Ballista gave Fernandez Torres the final push he needed to close out Severin before he could find a board wipe – which turned out to be just one card too late.

Finally, Fernandez Torres was on the board.

For the fourth game, Severin would be on the play. Unfortunately for him, it was also the first game he didn't complete Tron on turn 3, though double Sylvan Scrying put him there on turn 4. That was plenty soon enough, as that meant he had eight mana to play Oblivion Stone and hold up mana to activate it.

Fernandez Torres forced the issue by playing a second Hardened Scales before combat to along with his already impressive army of Constructs and Arcbound Ravager. By the time the dust settled, Fernandez Torres had one very large Blinkmoth Nexus – it ended up with 14 counters and attacked Severin down to 1 life. 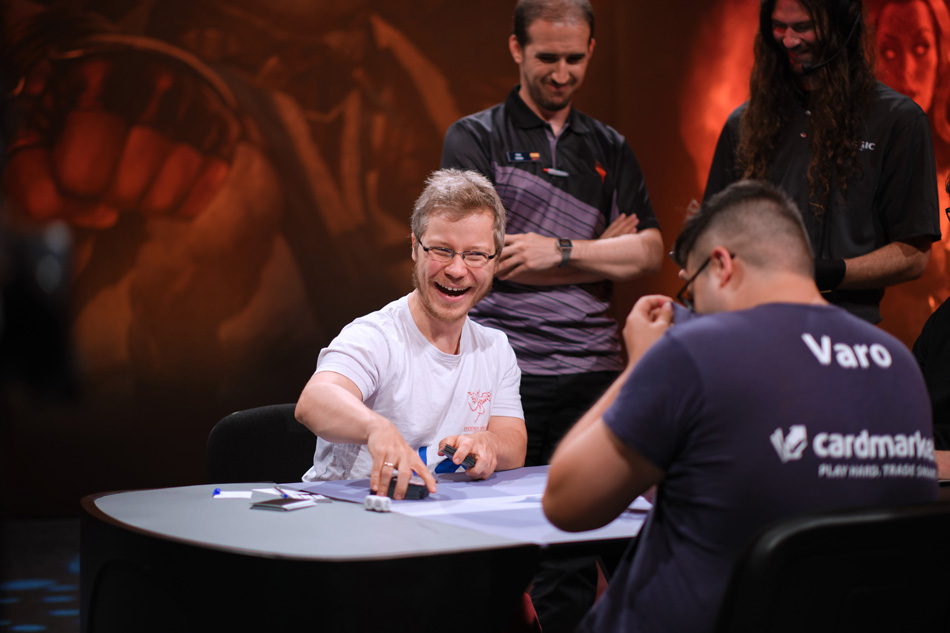 But once again, Ulamog saved the day for Severin. It exiled the Blinkmoth Nexus as well as a Forest, and Fernandez Torres was forced to simply pass the turn back without playing a card. Ulamog got into the red zone, and one draw step later Fernandez Torres had seen enough. As Severin's friends prepared to rush the stage, Fernandez Torres extended his hand and congratulated Severin on winning the Mythic Championship.