On Sunday, August 8, four players in the Challenger Gauntlet bested the field to secure their seats in the World Championship: Sam Pardee, Noriyuki Mori, Arne Huschenbeth, and Keisuke Sato all harnessed that perfect storm of deck selection, preparation, and tight game play to achieve a career highlight for any competitive Magic player, whether they're an aspiring pro or a veteran of the scene. 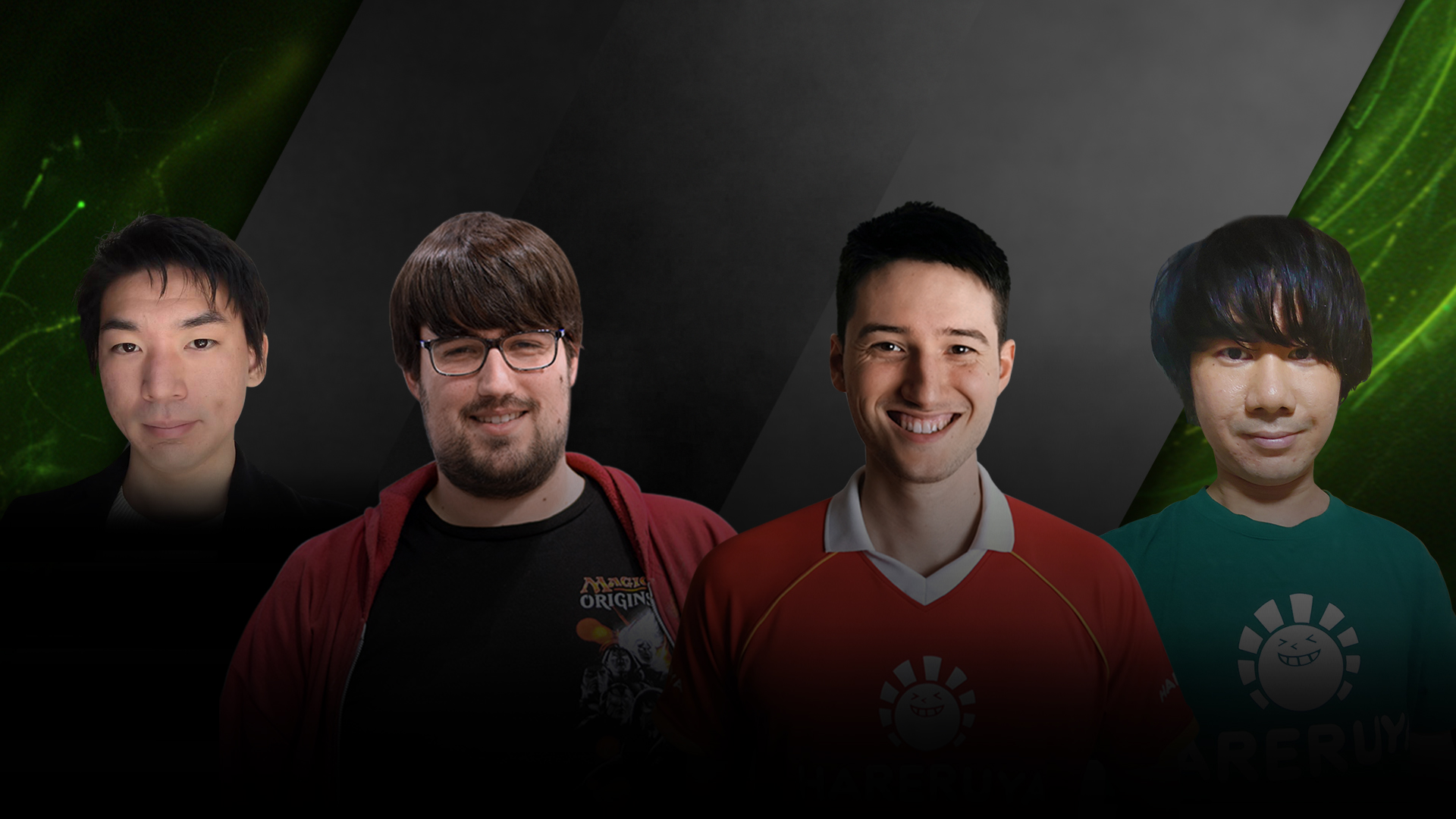 Like their choice of Standard decks, each of these four players had a different route to this moment.

Sam Pardee was confident heading into the Challenger Gauntlet. After barely missing out on making it to the Rivals League a season before, leaving his competitive future in jeopardy, Pardee has made the most of the past year.

"During the pandemic I just played what interested me, which for me is a lot of Limited and a lot of Modern," Pardee said after his final Gauntlet match. "I think that was a big thing for me, to help me stay in shape to play in big tournaments when I did eventually end up making it back to the PT-level events."

Pardee earned his confidence with thorough preparation, one of the most successful competitive resumes in the field, and a solid read on the metagame.

"I think the biggest factor for my success in the Challenger Gauntlet was my confidence and experience. I knew that I was one of the best players in the tournament, and feeling secure in that knowledge let me focus on winning and playing my best."

He was the last remaining undefeated player on Day 1, and while Day 2 proved a little rockier for the seasoned competitor he was still the only challenger to secure nine wins in the Swiss portion of the tournament.

"I think my first round of Day 2 was my most stressful. I knew that I was likely to either be paired against Jund or a Jeskai mirror and that Jund was a favorable matchup while Jeskai was going to be unfavorable. Getting paired against Jeskai made that doomsday scenario where I had a great Day 1 and then crashed and burned Day 2 flash before my eyes, but luckily I managed to win anyway and finish out Historic strong."

Pardee had no such worries going into his final match of the weekend.

"I was pretty calm and excited going into my final match. I've played a lot of high stakes matches in my life, and I'm not really the nervous type very much. Carolyn [his partner] was annoyed that after the match when I came downstairs and told her I won I wasn't jumping for joy, but as I said to her, I think if I was the type of person who did that I'd have been a lot more nervous going into the thing. I will say that after I won, I did have a brief moment of the adrenaline wave breaking, and needing to take a beat to compose myself, but during the match itself it just felt like another one of the hundred thousand or so matches of online Magic I've played."

The match might've been only one of thousands, but it secured Pardee a prize that even the best players can hope for only—a second chance at the World Championship, after his first trip in 2016.

"Magic has been a huge part of my life for a long time now. Getting another crack at the title of World Champion feels incredible and I'm really looking forward to competing. Also I'm really excited to do my first high stakes draft in years."

"I've got to thank Paulo [Vitor Damo da Rosa] also, I used his card in this event," Pardee said in his winner's interview. "Maybe next year it'll be someone using my card in their event hopefully."

The second player to secure their seat at the World Championship was Noriyuki Mori, who shook up the field with his unconventional Izzet Control Standard deck.

"He not only won one of the best prizes you can win in Magic—an invite to the World Championship with all that entails, an invitation to the Magic Pro League—he also did it with a rogue deck of his own creation," Luis Scott-Vargas said at the conclusion of Mori's win. "That's the thing Magic players literally have dreams about."

Though he was the only player in the field on Izzet Control, Mori didn't arrive at the deck alone.

Mori said that his "testing team members' help" was the most important factor in his success in the Gauntlet. "Especially, discussion with Kazune Kosaka is always meaningful."

Mori's rogue deck wasn't the sole factor that made him stand out from the competition. He only started playing Magic in 2019, much more recently than the Gauntlet's other players. He finished fourth in the Kaldheim Championship, which was his first-ever premier event. That finish catapulted him into the Challenger Gauntlet, which became his springboard into the World Championship.

It's an incredible series of events for such a fresh face, but Mori has put in the work. He's logged more than 25,000 games on Arena since his start in 2019.

"Eight hours of Magic, eight hours of research, eight hours of sleep, that's my day," Mori said after his win. It's an impressive amount of preparation, and it proved successful for Mori's second premier-level tournament.

"I haven't decided how to prepare for the World Championship because so far my schedule was full of preparation for this event," Mori said after his win. "I have to practice Limited. I like it, but I'm not good at it."

Even now, after his Top 4 finish, Mori is incredulous at where this dedication and preparation have landed him. "To be honest, it hasn't hit me yet but I want to enjoy playing Magic as usual!"

Mori's feelings now mirror those he had when facing down his final Gauntlet match against Matti Kuisma. It's a mix that's familiar to those versed in the sometimes thrilling, sometimes agonizing wheel of anticipation.

Next, Arne Huschenbeth had a second chance at a World Championship seat. While an outstanding Swiss performance put him into the Top 4 at the start of Sunday, he lost his first match to Sam Pardee.

Huschenbeth's emotional interviews and in-match reactions were a favorite with viewers, but the same nerves that drive those reactions can be a liability in the midst of a match.

"To cope with the stress, I wrote my thoughts down on a piece of paper before facing Sam Pardee," Huschenbeth said. "I think it helped." 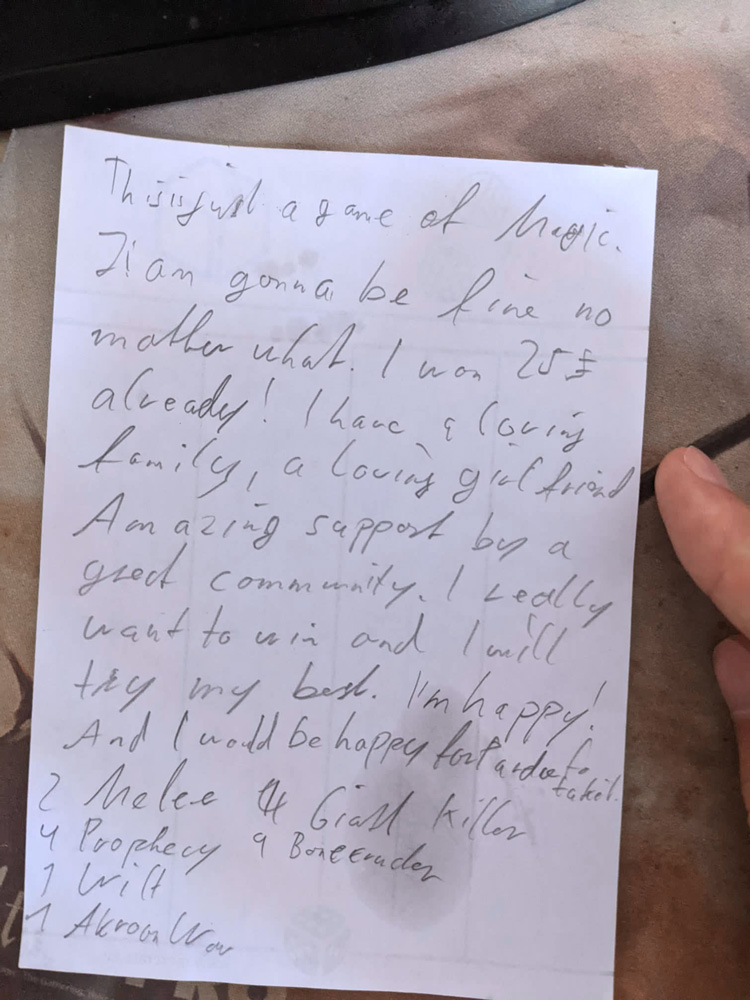 The note reads: "This is just a game of Magic. I am gonna be fine no matter what. I won 25$ already! I have a loving family, a loving girlfriend Amazing support by a great community. I really want to win and I will try my best. I'm happy! And I would be happy for Pardee to take it."

Even prior to his World Championship qualification, it was already an incredible year for Huschenbeth, who skyrocketed from breakthrough player to tournament favorite.

"You don't get that chance every day, or ever, maybe, again," Huschenbeth said before his final match. "This year already has been amazing for me. At the beginning of the year I was nothing. I won a [Qualifier Weekend] and then all of a sudden I was in the finals of a [Championship]. I'm happy with all I got."

Like Mori, Huschenbeth credits his team as the most important factor in his Gauntlet success. "I wouldn't have been able to do it without Sam Rolph, Matti [Kuisma] and David [Inglis]," he said, naming three other players who also made it to Sunday play in the Gauntlet.

"Is this a dream?" Huschenbeth asked after his win. "I'm bathing in sweat, I'm shaking, I completely flipped out, I don't know if I can believe this. It's hard to put in words. I'm incredibly relieved, I'm incredibly happy, it is an amazing feeling, I can't even grasp it right now."

"I have always dreamed of being able to compete at the biggest stage of the game. It feels surreal to actually accomplish this feat. I am looking forward to the highest level of competition." 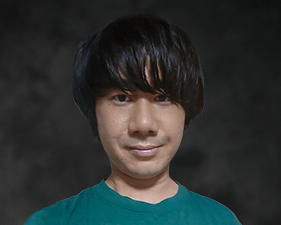 Keisuke Sato had the most challenging Sunday path to a seat at the World Championship. Unlike Pardee, Mori, and Huschenbeth, who all entered Sunday in the Top 4 and needed only a single win to secure their invite, Sato first had to win a tiebreaker match on Saturday evening to even make the Top 12, and then had to win four matches in a row on Sunday.

It was a rollercoaster of a tournament for Sato, who started out 0-3. He then rallied to 6-5 only to lose his final Swiss match with Naya Winota to João Moreira playing Dimir Rogues.

"I wasn't favored in the maindeck but I believed my deck had a chance after sideboarding. Considering I had good result in the past in the same matchup, I started the second game with confidence. But, I ended up losing 0-2 which put my record to 6-6. As my [opponent match win percentage] was low, I thought I wouldn't be able to proceed to Day 3 nor play in a tiebreaker. I remember feeling hopeless at that moment as I really thought the path to Rivals or MPL had closed for good. But luckily, I got to play in a tiebreaker."

"The reason I did well in Standard was because the game plans I prepared beforehand worked really well in the actual matches. Also, maintaining focus until the end of each match and keeping myself calm probably were another important factor. I started out 0-3 on Day 1 with Historic which was harsh, but I managed to keep myself calm and turned the record to 3-3 by going 3-0 in the Standard rounds. The Historic rounds on Day 2 also made me struggle but I could maintain my focus and calmness even during the tiebreaker, which contributed to my success. And of course, the Japanese audience and players cheering for me gave me enormous encouragement. Thank you very much!"

It wasn't just Japanese players at home watching the event that inspired Sato, but also Mori's win earlier in the day.

"Seeing him winning in the upper bracket lit a spark in my heart. I remember I had a strong feeling that I wanted to win and make it to Top 4 like he did. I was saying to myself that it's just me giving all I got to the last match and will grab the seat."

Unlike Huschenbeth, Sato found a strange kind of calm in his final match, perhaps because his path there had been so rocky.

"Even though my heart was fired up and I had such strong feelings, I was somehow relaxed and calm during the last match. Even in the match with incredibly high stakes. I don't think I'm mentally strong, but I didn't feel much pressure. Coming back from that disastrous 0-3 record and barely making it to Day 3, I approached the matches thinking if I could pick up a win, I'd be lucky (of course I wasn't giving up), so this probably helped me relax during the matches."

Sato, along with Pardee, Mori, and Huschenbeth, now moves on to a once-in-a-lifetime opportunity that will challenge that calm. But all four of these players have already proven that they have the passion, dedication, and uncountable hours of hard work that it takes to succeed.

"As a competitive player, playing in the World Championship has been one of my dreams, which I had thought would never come true," Sato said. "I'm extremely happy that it will happen but on the other hand it's still quite hard to believe. I remember various feelings just exploded at the moment I won. In a field full of the best players, I'm not sure how well I can do but I'm looking forward to playing with them already. With the honor of playing in [the World Championship], I will give it everything I've got and go for the trophy!"