The Mythic Invitational began with 64 competitors, from the world's best professional Magic players in the Magic Pro League to some of the most popular streamers and community members plus in-game qualifiers. But after two grueling—and exhilarating to watch—days of group competition, the Top 16 was set.

That's where we picked things up on Saturday, as the following competitors squared off for the right to play in Top 4 Sunday competition. 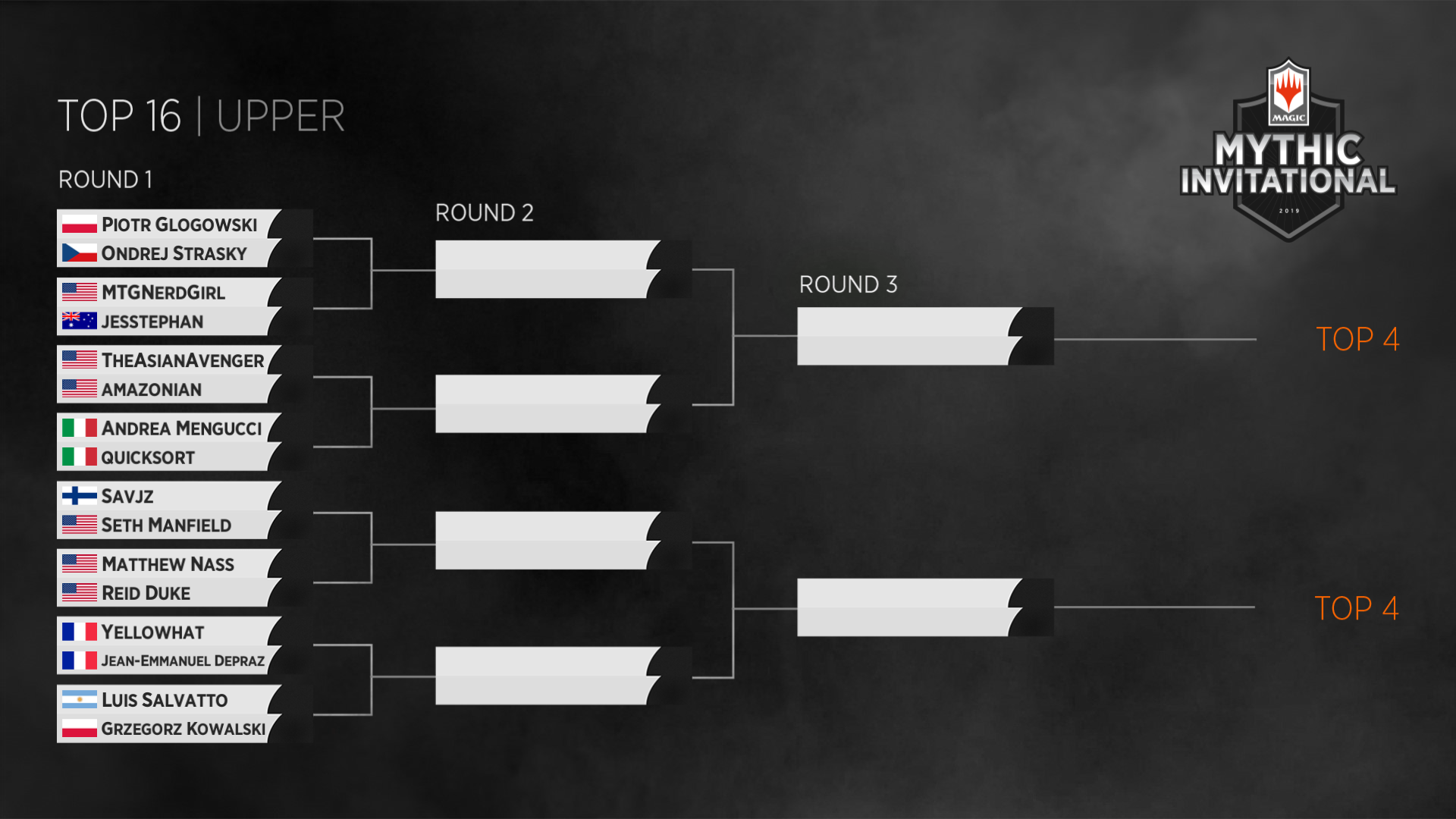 Eight Magic Pro League members, eight challengers from the community, and each name on the bracket represents a unique story. It's Luis Salvatto, well-used to the pressure of the stage but fighting his own challenge of trying to live up to the pressure of being the reigning Player of the Year. It's Edoardo "Quicksort" Annunziata, who had never played in a sanctioned match before this weekend but qualified for the Invitational by finishing in the Top 8 of MTG Arena last month. It's the streamers like Brittany "MTGNerdGirl" Hamilton, Amy "Amazonian" Demicco and David "The AsianAvenger" Nguyen qualifying for the Top 16 as true underdogs.

In the end, four players survived to the Top 4.

Two MPL members, two challengers. But to anyone familiar with Mikkonen and Stráský, their place in Sunday is no surprise. Congrats to the Top 4 finishers!

Głogowski is known for several things in Magic—his work on Modern archetypes like Lantern Control, his well-known online prowess under the handle "Kanister," his Top 8 appearance at Pro Tour Ixalan. But as the Mythic Invitational has rolled on and Głogowski has kept winning, his postgame interviews have been just as much of a highlight, as the normally stoic competitor has allowed himself a little fun.

Now he's advanced to the Top 4 and may find himself holding a trophy and a $250,000 check by the time we finish play Sunday. So you can be sure his Top 4 interview didn't disappoint. 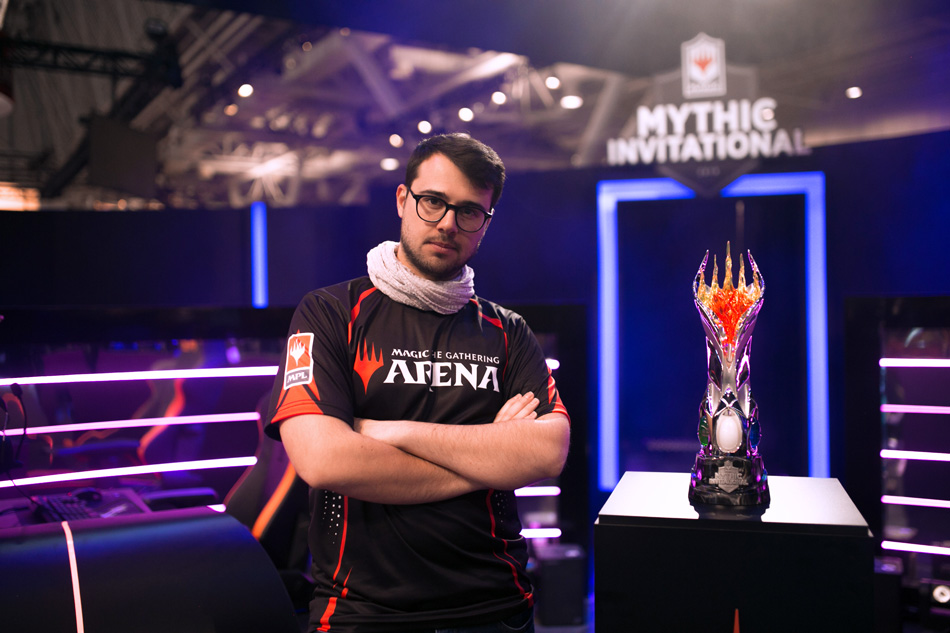 Mengucci is the face of Italian Magic and has blossomed over recent years into a true superstar of the game. His content creation as well as a string of three Top 8 appearances on the Mythic Championship series have endeared him to fans worldwide, and he's become a Sunday fixture at this stage. Three World Magic Cup Top 4 finishes—including a win in 2015—round out the most impressive resume of the Top 4 finishers. 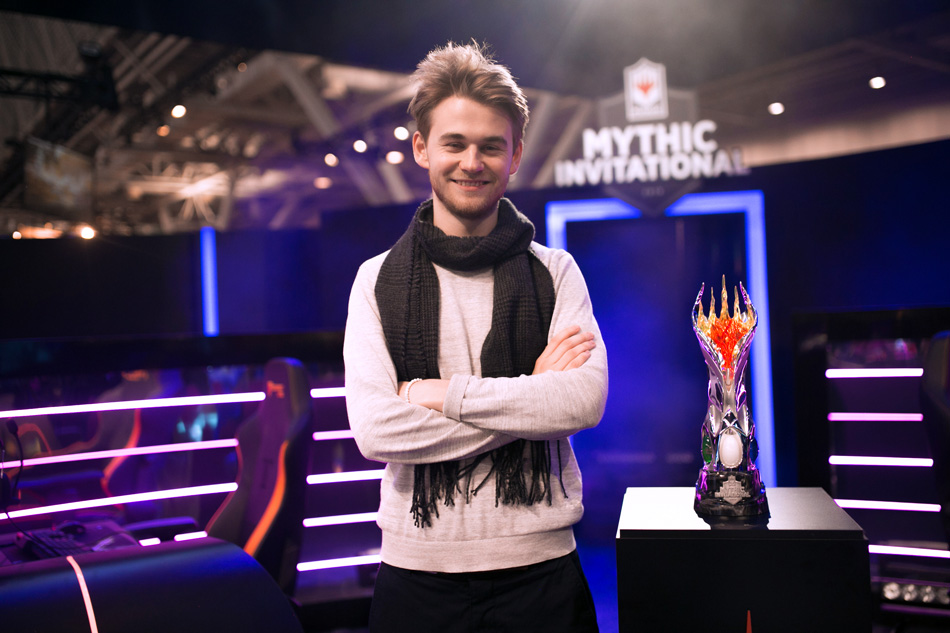 Stráský is a challenger only in name. In reality, he's played on with and against almost everyone in the Magic Pro League for years. But while most of his peers at the tournament qualified through other means, Stráský did it the hard way—by finishing in the Top 8 of Mythic rank in MTG Arena last month. It was an incredibly difficult feat, matched only by his impressive run this weekend.

The running joke is that Stráský keeps retiring and un-retiring from competitive Magic, so long as he wins the next tournament. So, for another day at least, consider Stráský not retired. 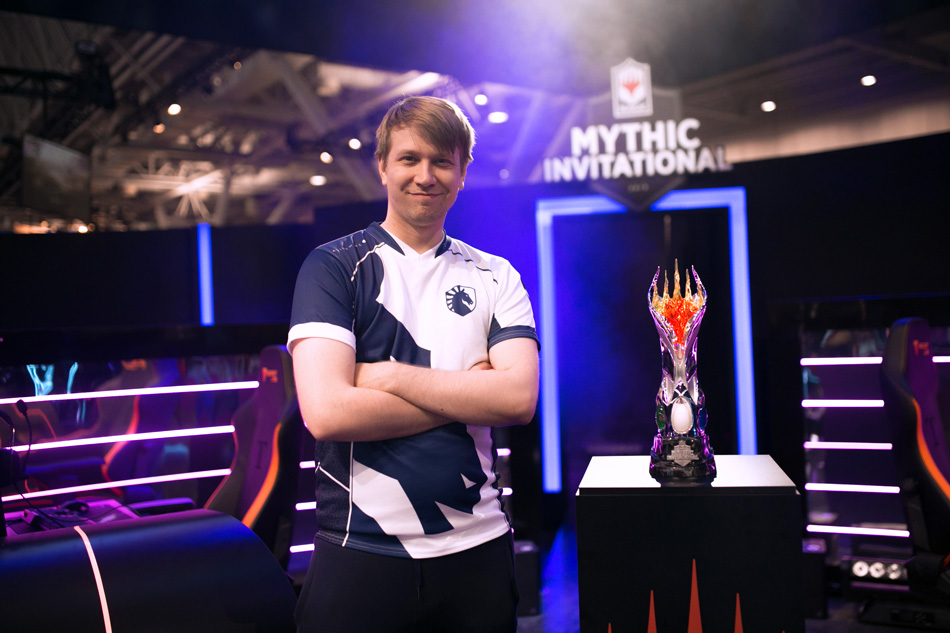 Savjz may not have entered the Mythic Invitational with a Magic resume as deep as some of the other participants. After all, his background is in other games and with a field so stacked with Magic legends it may have worked to Savjz's advantage to be overlooked.

But after a Top 4 appearance this weekend, no one will make that mistake again.

Match of the Day

Call it a calculated move. Call it a lucky break. Call it a "miracle line," as Marshall Sutcliffe dubbed it in the moment. Whatever you want to call it, it resulted in what may have been the most unexpected victory—or defeat—that we'll see in the entire tournament, as Matt Nass upset Seth Manfield in truly dramatic fashion.

That's the pivotal moment, but it represented just one exceptional highlight from a match well worth watching.

From Around the Floor

One of the most fun stats I've seen come out of the Invitational this weekend has been the comparisons between the widely disparate playing backgrounds of the competitors. Some, like MPL members Seth Manfield or Reid Duke, have been high-level Magic players for years, while many of the challengers have never played at a Mythic Championship before.

That led to some eye-catching numbers, like the fact that Edoardo "Quicksort" Annunziata had played zero sanctioned matches of paper Magic before this weekend but had logged 4,919 games of MTG Arena. Meanwhile, when Stráský squared off against Nguyen, the on-again, off-again high-level competitor could boast of 20 Mythic Championship appearances to Nguyen's zero. But when you look at Arena? TheAsianAvenger could point to 4,604 games of Arena, three times as many as Stráský.

So which experience mattered more for this weekend? With two MPL members and two challengers in the Top 4, the jury is still out.

One of the realities of professional Magic is that many times you're forced to play against your friends. And for Top 4 finalist Andrea Mengucci, that meant knocking out a pair of friends en route to his Sunday spot. First, Mengucci had to beat his travel and testing partner Luis Salvatto. The road didn't get any easier after that, as next up was one of his favorite streamers—and certainly the most famous hat in Magic.

Friends or heroes, Mengucci was the winner on Saturday, and that means he'll carry the torch to Sunday with a chance at claiming the title.

TheAsianAvenger is Always Having Fun

Win, lose, or interview, David "TheAsianAvenger" Nguyen is always having fun, and his chats with Becca Scott over the past two days stand out as a highlight from the event that goes beyond just the game played.

While his run to a possible Top 4 was thwarted on Saturday, Nguyen was all smiles on his way out, a fact that was not lost on the thousands of fans following his tournament.

I don’t feel so good Mr. Stark. @kanister_mtg had too many infinity stones on his infinity hat. His emote game was strong and I respect that. Gotta go back to the locker and study the tapes and go out and make more plays. #MythicInvitational #mtg #paxeast pic.twitter.com/vucx0HNvpO

I love how The Asian Avenger is able to smile and laugh as his opponent blasts him out of the tournament with a Lightning Strike. He also enthusiastically shook his opponents hand while still smiling. It shows a great mindset and a real joy for playing the game, win or lose.

Sixty-four players, four groups of all-stars, Hall of Famers and prolific streamers. It's all come down to four players – Andrea Mengucci, Piotr Głogowski, Ondřej Stráský, and Janne "Savjz" Mikkonen – who will come back on Sunday to vie for the $250,000 first-place prize and the title of Mythic Invitational champion.

But that's not all there is. A panel about the upcoming War of the Spark set, which promises to explore planeswalker ground never previously seen, will run before the conclusion of the Invitational. There's one more day of Magic at PAX East, and it all kicks off at 10:30 a.m. Eastern time tomorrow!

Closed out our last day of the #MythicInvitational from the stage on the #PAXEast show floor with this awesome crew. Tomorrow we play the Top 4 after the War of the Spark panel from the PAX Arena! The whole show starts tomorrow at 10:30 EDT! Don’t miss it! pic.twitter.com/QmjnUcfC9i