The Innistrad Championship is underway now! With members of the Magic Pro League and the Magic Rivals League as well as top players from qualifying events held on MTG Arena and Magic Online, they battle for $450,000 in prizes in both Standard and Historic formats live December 3–5 at twitch.tv/magic.

You can find the Innistrad Championship decklists online now, with examples of every archetype included below to see what's being played across the tournament. This article covers Standard, but the Historic breakdown has all the same details ready for you.

This article expands on the Innistrad Championship metagame preview, diving into the decklists and analyzing what to expect throughout the weekend. Friday and Saturday each feature four rounds of (best-of-three) Standard. 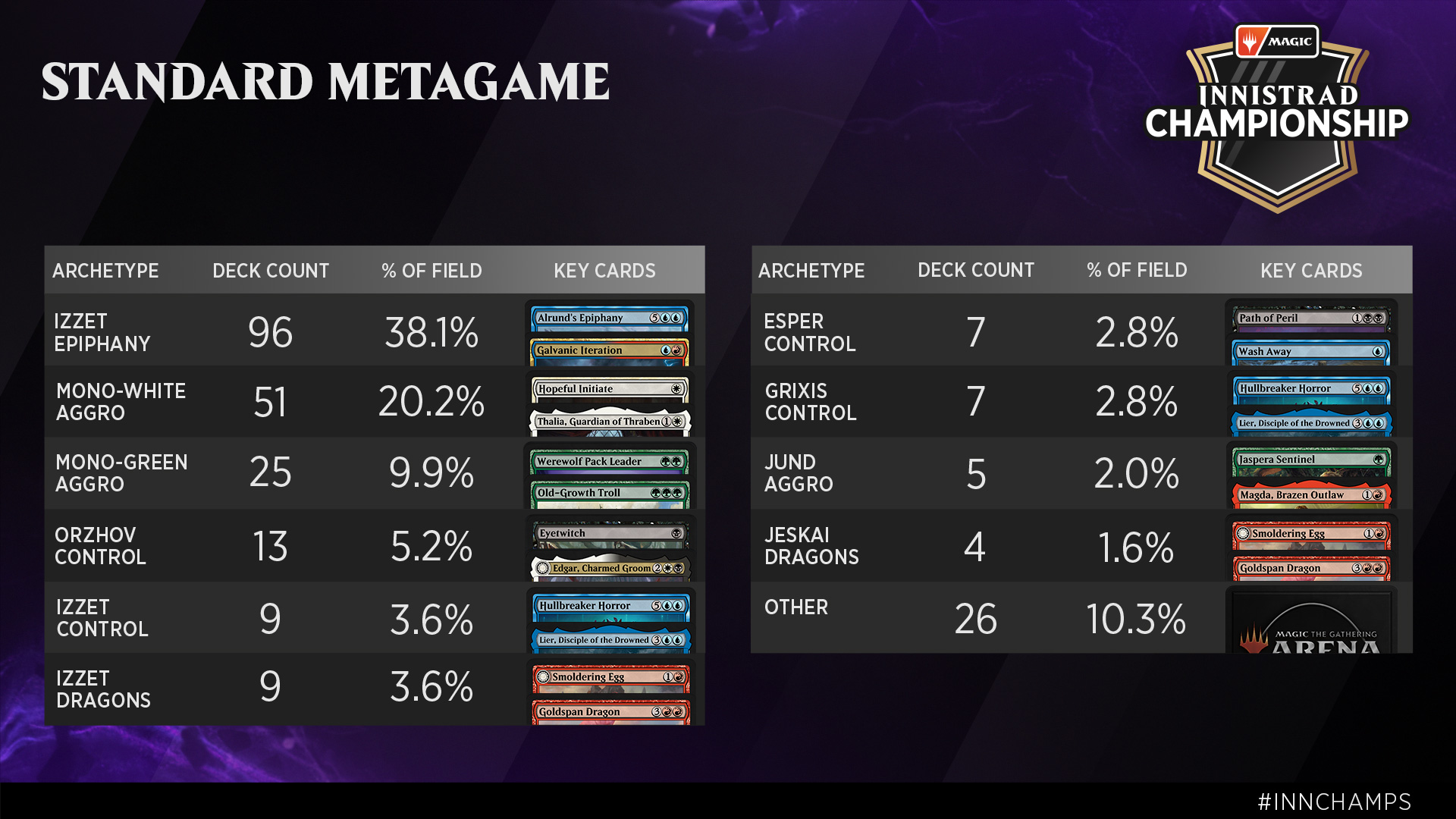 One-and-a-half months ago, after Magic World Championship XXVII set the stage, the top three decks in Standard were Izzet Epiphany, Mono-Green Aggro, and Mono-White Aggro. The release of Innistrad: Crimson Vow hasn't changed that. Combined, these top three archetypes comprise over two-thirds of the field at the Innistrad Championship.

Innistrad: Crimson Vow has nevertheless adding many impactful new tools. For example, Orzhov Control had a resurgence thanks to , while and gave Esper Control a nice boost. Moreover, the likes of and boosted tribal aggro decks.

But at the Innistrad Championship, the eight most-played cards from Innistrad: Crimson Vow in Standard are all additions to the aforementioned top three archetypes. Many Mono-White Aggro players adopted , , and ; most Mono-Green Aggro players filled out their mana curves with and ; and Izzet players were generally happy to gain along with new options in and .

In part due to , there are now many different Izzet end-games possible. There is a difference between Izzet Epiphany, Izzet Control, and Izzet Dragons, largely based on how they plan to win the game, but the dividing line is small, and black or white splashes complicated the deck labeling process further. It's not trivial to define where Izzet Epiphany ends and, say, Grixis Control begins. What I can say is that Izzet Epiphany is the most popular version by far and that I applied consistent definitions—explained in the Standard archetype overview below—throughout.

Regardless of whether decks are labeled as Epiphany, Dragons or Control, it's insightful to zoom out and look at the big picture. In total, 127 players (50% of the field) registered a deck with , , , and/or . Indeed, these four cards, all with at least 460 copies across all Standard lists, were contained among the six most-played cards other than basic lands.

The three most-played nonland cards overall are the aforementioned (486 copies) and, more interestingly, (485 copies) and (505 copies). and are not only contained in every Izzet, Grixis, and Jeskai deck but also sometimes included in other archetypes. To me, this is fascinating— and were also legal half a year ago but saw barely any play back then, even in blue or red decks. Just imagine that half a year ago you would have claimed that would be the most-played spell in Standard right now. No one would have believed you! It makes me wonder which undiscovered Standard gems we might be missing right now.

In any case, the flexible modality offered by these spells can explain why Izzet-based decks are so popular: They rarely get mana screwed or mana flooded. Need a land? Play or . Need to answer an opposing ? Use the other half to burn or counter it! is similar—besides being an always-relevant, card-neutral tempo play, it offers the flexibility of grabbing when you're light on lands or when you're flooding out. Add the raw efficiency of , and you have a powerful core of cheap spells that ensure you'll always be able to play a good game of Magic.

On top of that, the different end-games allow Izzet players to adapt to the current state of the metagame and/or the specifics of their opponent's list. If you fear , then you can swap out for (or move to Izzet Dragons altogether). If you expect to face spot removal spells, then you can go back to . Many Izzet decks have alternative seven-drops in the sideboard, allowing them to adapt their end-game to whatever will be most difficult for their opponent to answer. Speaking of sideboards, Izzet players also have far stronger sideboard options than mono-color aggro players, and thanks to the massive number of card draw spells, they'll find their key sideboard cards more consistently. With all that in mind, a properly-tuned Mono-White Aggro or Mono-Green Aggro deck may still have a positive matchup against Izzet Epiphany, but it's never a lopsided walkover.

In summary, the power of decks lies in the combination of early-game consistency, late-game power, and the availability of flexible options at all stages of the match. That, in my view, is why many veteran players have flocked to Izzet Epiphany and its variants.

Izzet Epiphany (96 players): These decks are defined as containing at least two (and usually three or four) copies of main deck, along with to copy the extra-turn spell and to ramp into this combo reliably.

Mono-White Aggro (51 players): These decks plan to curve out with aggressive creatures like , and most players adopted and from Innistrad: Crimson Vow.

Mono-Green Aggro (25 players): These decks can put a lot of power onto the battlefield with , , and , and most players adopted and from Innistrad: Crimson Vow to become more aggressive.

Orzhov Control (13 players): These multi-faceted decks can exploit or with , sweep the board with or , and (unlike Mono-Black Control) leverage the staying power of . Orzhov Control is good against aggro, but weak to Izzet Epiphany.

Izzet Control (9 players): These decks have a lot in common with Izzet Epiphany, but I defined them as containing at most one (and usually zero) copies of main deck and instead using at least 2 and 2 as the main win condition.

Izzet Dragons (9 players): These decks have a lot in common with Izzet Epiphany, but they usually don't rely on or and instead have at least nine combined copies of , , and , providing a proactive advantage against creature decks at the cost of a slightly weaker matchup against other Izzet decks.

Esper Control (7 players): These decks can beat aggro decks with and , counter foretold with , and eventually win the game with a big legend.

Grixis Control (7 players): These decks are basically Izzet Control decks with at least one black spell in the main deck.

Jund Aggro (5 players): Black is just a minor splash—these decks mainly plan to ramp into a turn-three via or , and they all pack an aggressive punch with and .

Jeskai Dragons (4 players): It's basically Izzet Dragons with a minor white splash for .

Mono-Black Zombies (3 players): The headliner is , for which token creators like and will ensure a steady stream of triggers.

Rakdos Vampires (3 players): , , and were around before, but Crimson Vow has supercharged the tribe with the additions of , , , and .

Dimir Control (3 players): and stop the opponent from developing, and takes over in the late game.

Mono-Black Control (2 players): has added a much-needed early-game disruptive element to the controlling core of and , and it may improve the archetype's previously weak matchup against Izzet Epiphany.

Naya Aggro (2 players): There are many ways to build an aggressive deck in the Naya colors, but one commonality among the two lists is that they pair with .

Orzhov Midrange (2 players): These decks can feed the first ability of with tokens from , and they differ from Orzhov Control in that they don't run or .

Mono-Blue Tempo (1 player): and are perfectly serviceable one-drops, and afterwards you can play a flash tempo game with the likes of .

Selesnya Lifegain (1 player): With and , Innistrad: Crimson Vow has contributed greatly to an aggressive lifegain theme.

Azorius Tempo (1 player): You can build your own by discarding to , and at that point is the perfect protection.

Dimir Delver (1 player): demands a lot of instant and sorcery cards, while plus add a discard angle.

Azorius Control (1 player): This deck says 'no' to spells with , 'no' to creatures with , and eventually flashes in for the win.

Orzhov Sacrifice (1 player): This deck can sacrifice for value to or , but unlike Orzhov Control, there are no sweepers.

Jund Treasures (1 player): This deck puts Treasures to good use with and , but it's not overly aggressive and even runs the cleavable-via-Treasures . 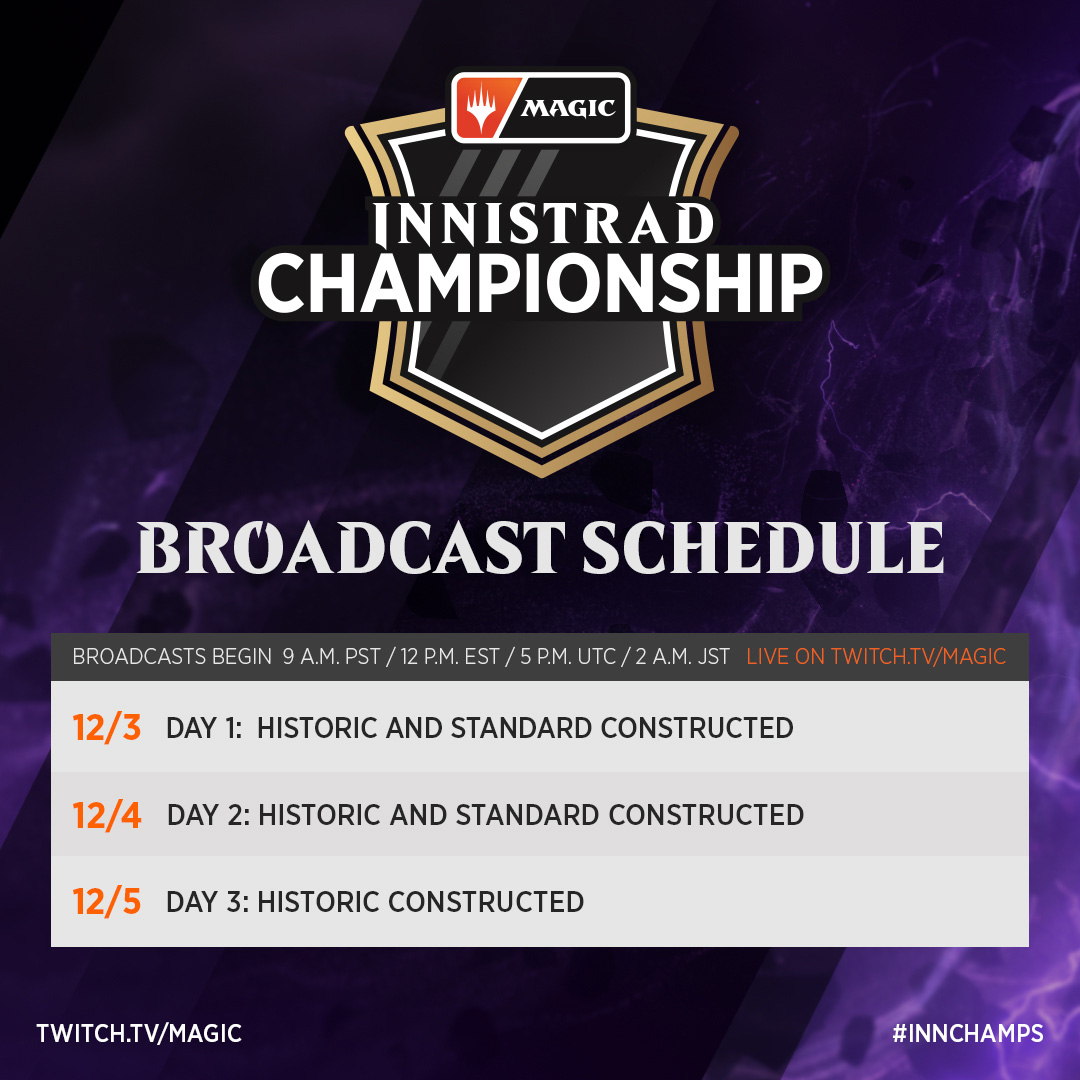 Follow along the latest updates and watch the Innistrad Championship, December 3–5, to see which deck comes out on top!