From over 200 players, both Standard and Historic picks at the Kaldheim Championship showed off both the "best decks" and new additions each format had to offer. The Top 8 is playing out now, and largely represents the fields. 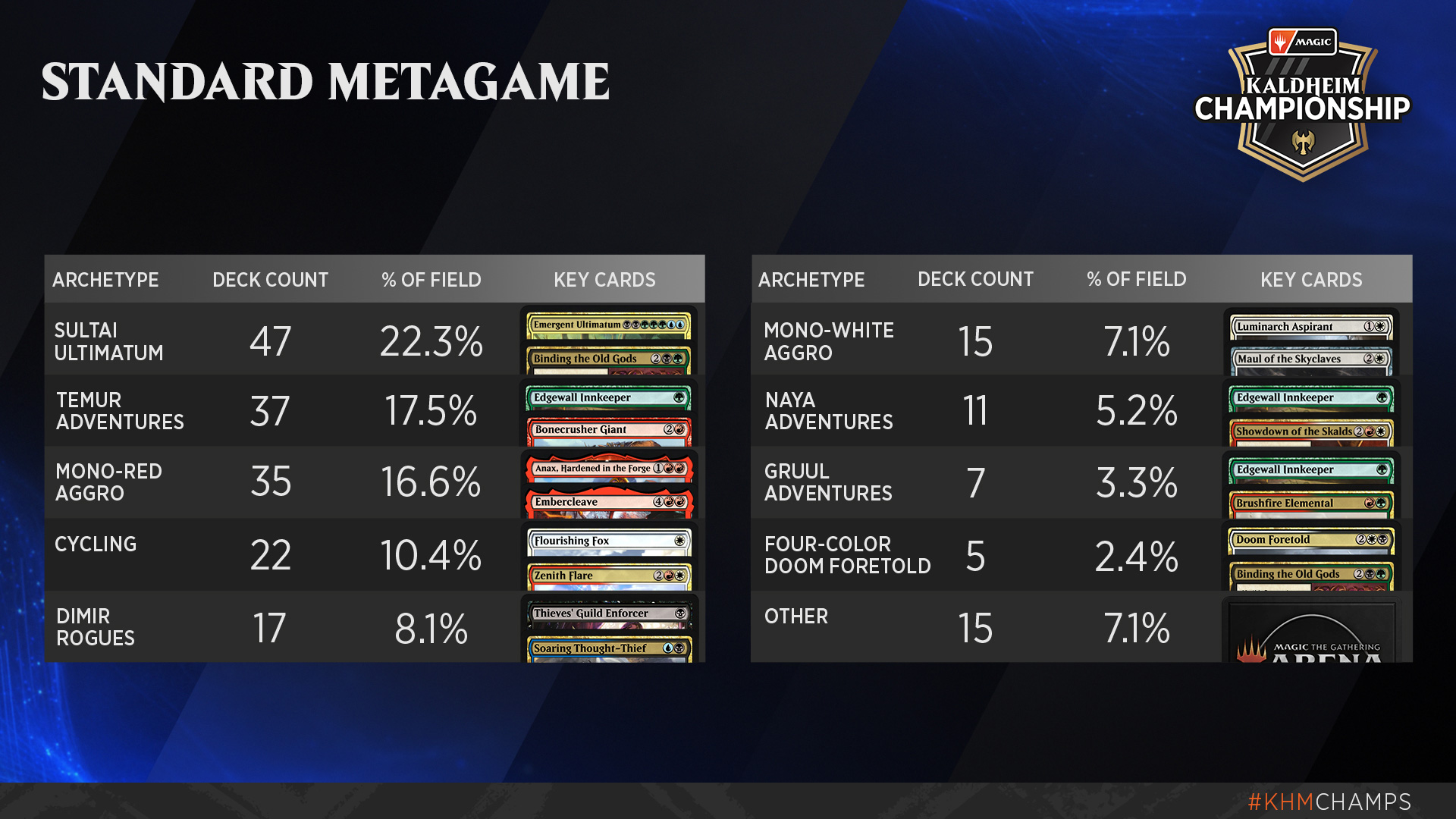 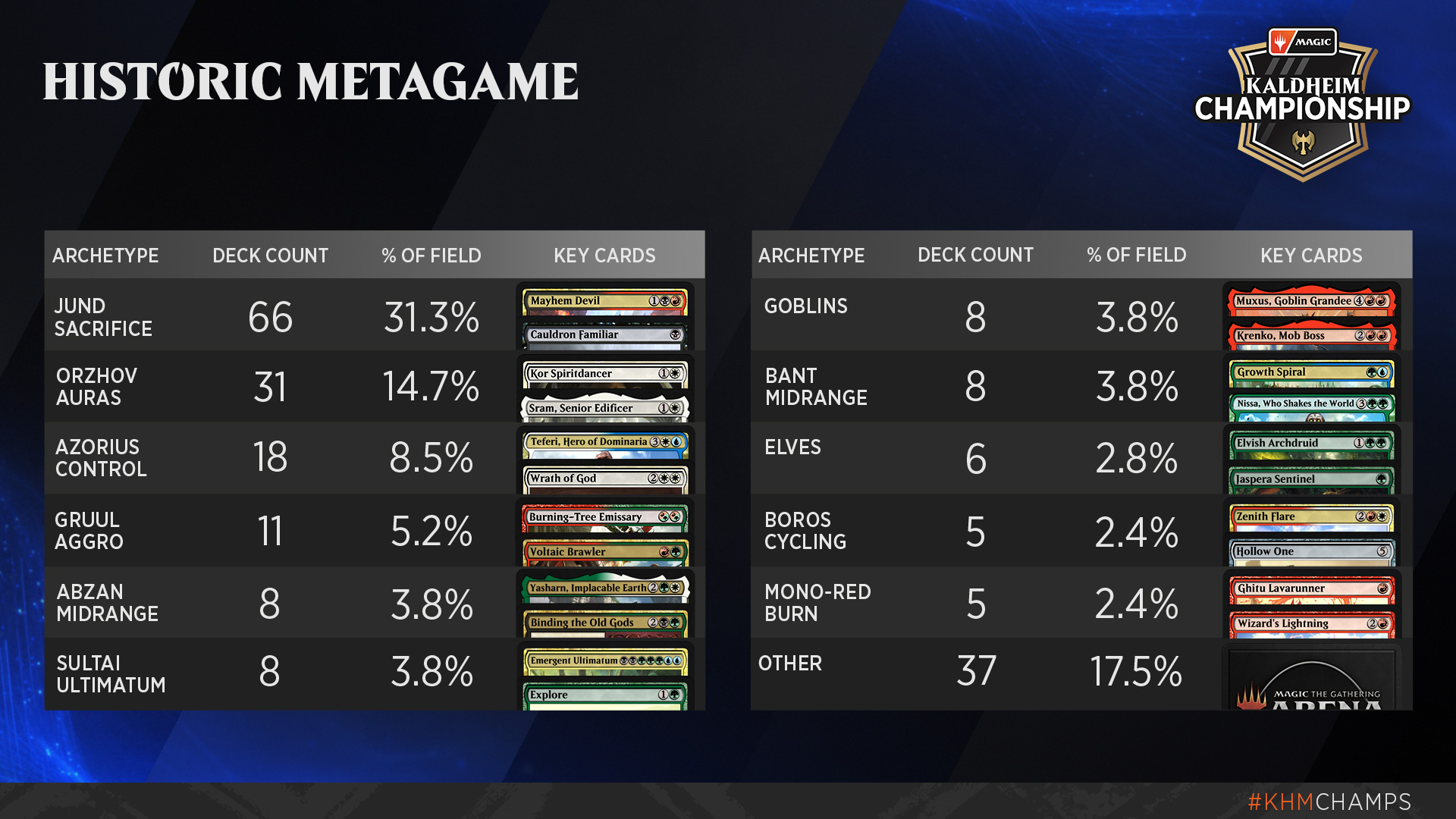 In Standard, Sultai Ultimatum was the most popular deck entering the tournament, while Jund Sacrifice led the field in Historic, but players not on those decks came with a plan to defeat them. Were they successful? Here's what the numbers tell us. 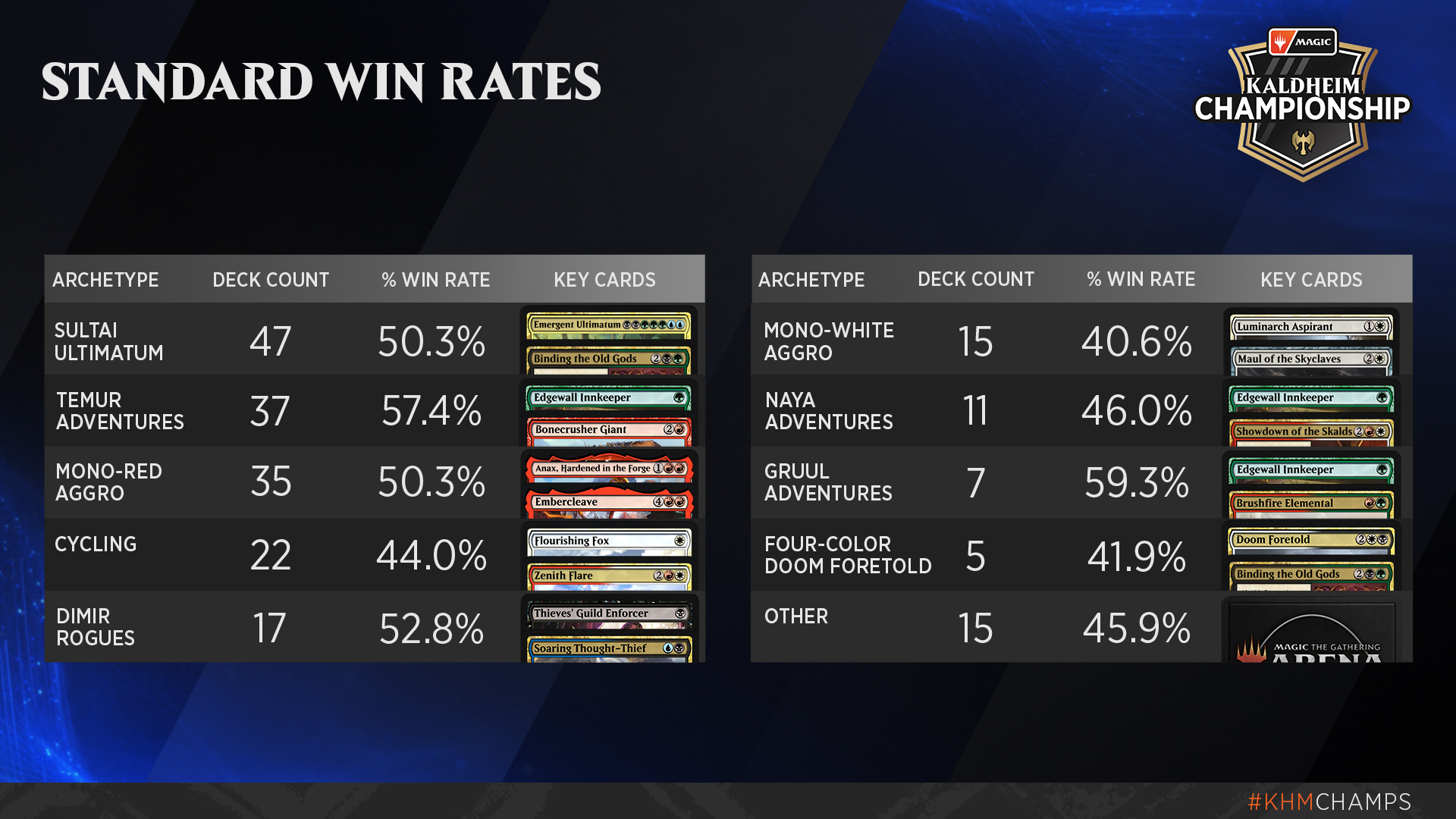 Gruul Food, which is basically what you get when you start with Mono-Green Food and then splash for and , had the best record overall: 11-5 (69%). The innovative archetype was played by Akio Matsuzaki,Kazuya Takuwa, Tetsushi Sawada, and Top 8 competitor Noriyuki Mori—a group of rising Japanese players who all brought the deck. And for the purists out there: It is a 61 card main deck.

Of the more popular archetypes, Temur Adventures posted the best performance. Combining the core with and yields a powerful deck. At the Kaldheim Championship it seemed to have no bad matchups: It went 50-50 or better against everything in the field. Both Shahar Shenhar and Javier Dominguez piloted Temur Adventures to the Top 8.

Here's the complete breakdown of non-mirror match win rates for Standard archetypes at the Kaldheim Championship. (Win rates are from non-mirror, non-bye matches.) 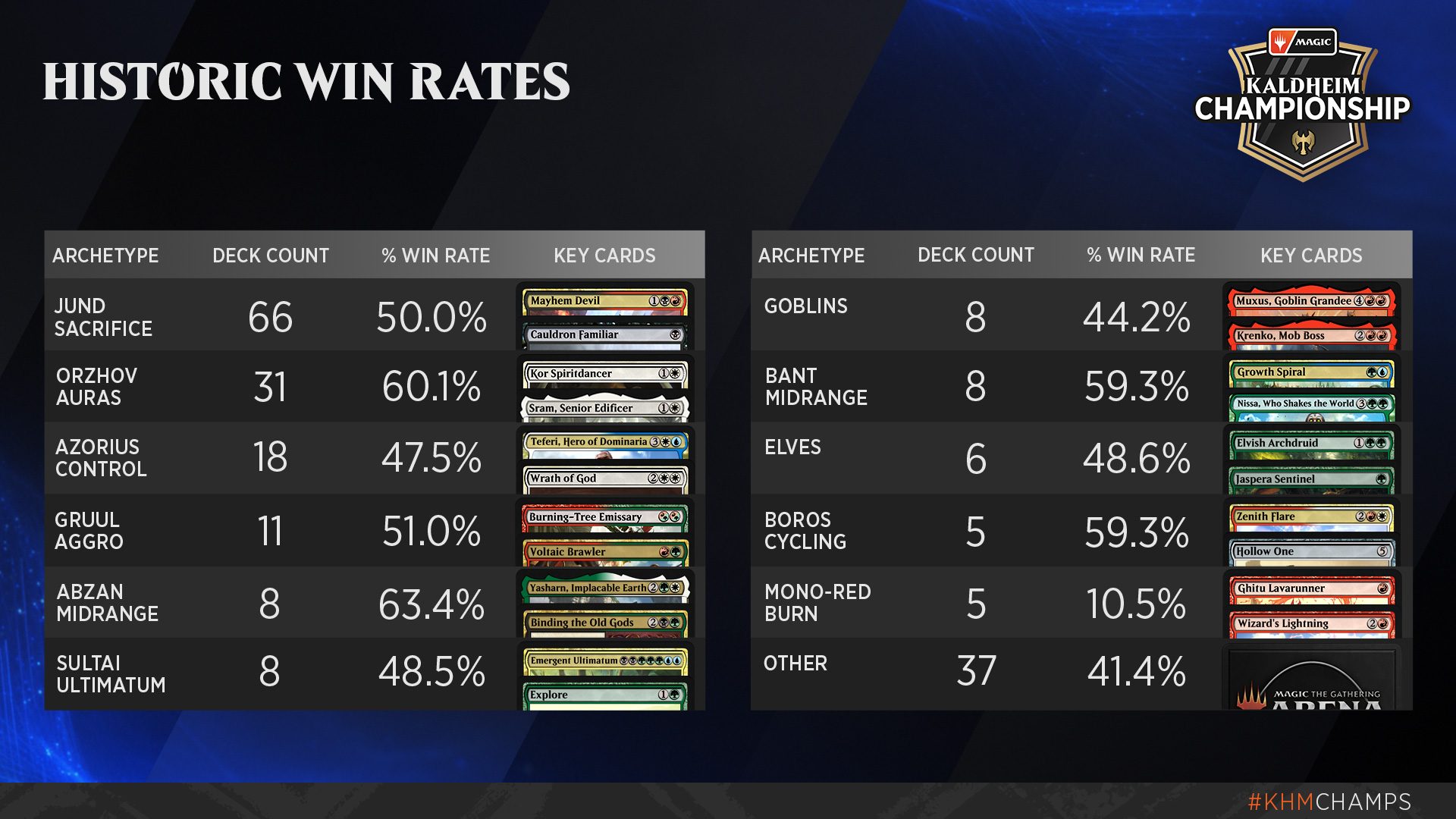 Of the decks with more than one player, Four-Color Midrange and Abzan Midrange had the best records overall. Abzan Midrange was brought by league players testing together, designed by Hall of Famer Gabriel Nassif and combined and into a Yorion shell that proved to be a successful way of attacking Jund Food specifically and the format in general.

The breakout deck of the weekend, Orzhov Auras, posted the best performance from decks with at least eight pilots, though it struggled with the popular Sacrifice decks in the tournament. And, speaking of the most popular deck, Jund Sacrifice itself was average as it went perfect even in non-mirror matches overall.

Here's the complete breakdown of non-mirror match win rates for Historic archetypes at the Kaldheim Championship. (Win rates are from non-mirror, non-bye matches.) 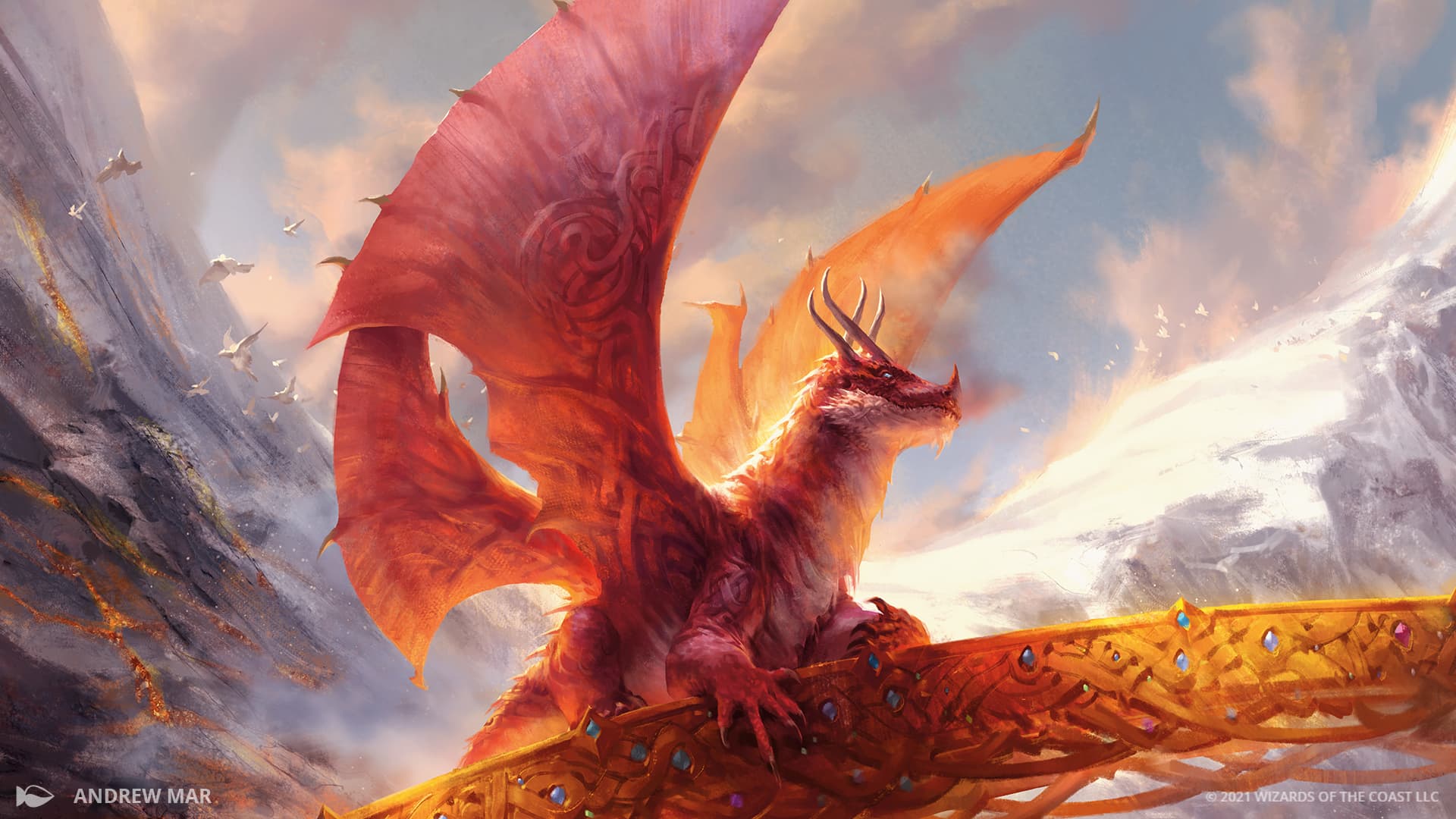