A year of competition. Dozens of Grand Prix and Magic Pro League matches and Mythic Players Tour rounds. Everything the 16 players at Magic World Championship XVI came down to this: Two finals players battling for the title of World Champion and the $300,000 prize that came with it.

It was the biggest moment in Magic history, and finalists Paulo Vitor Damo da Rosa and Márcio Carvalho made sure it lived up to the hype.

Unbelievable finals coming up at #MTGWorlds. Two of the best if not the two best in the world right now playing off for the World Championship. Doesn’t get better than this.

The finals was a matchup between two of the pre-tournament favorites. Carvalho is widely viewed as one of the best Limited players in the world, and Damo da Rosa is regularly mentioned as one of the best to ever play the game. It would be Damo da Rosa's Azorius Control against Carvalho's Jeskai Fires, and thanks to Damo da Rosa's dominant performance thus far—he had advanced directly to the Grand Finals by winning the most up to this point—he needed to win a pair of best-of-three sets, while Carvalho would need to win three.

In what may be the most memorable World Championship final ever, the unique format led to a showdown that went the absolute distance as the two played game after game, match after match, to determine the winner. For the biggest World Championship in the game's history, it was a fitting ending.

The first game demonstrated exactly why Damo da Rosa brought Azorius Control to the tournament. Carvalho played threat after threat, but the Tempo Storm pro had every answer. ? . ? Countered. Any stray creatures in play? .

It was a clinic in control. or not, Damo da Rosa cruised to a victory in the first game and found himself in complete control.

The second game saw Carvalho fight back, resolving plus . The hasty attackers knocked Damo da Rosa down to 5 life, but a clutch gave him some breathing room. held the line as Carvalho struggled to find another threat, and took out the . When followed, it was quickly match for Damo da Rosa, who was just one match win short of the title.

Carvalho's back was up against the wall—he would need to win three straight matches to take the title. But he entered the tournament with a win-or-bust mentality, and he wasn't going to go down easily. He immediately stormed back in the second match, winning the first game thanks to a giant -fueled attack.

And the comeback truly began.

The second game looked much like the first, and showed off the power of . Even after Damo da Rosa played and then used to remove a , a second one for Carvalho gave him all he needed to win the game and the match.

Just like that, we had a match. Damo da Rosa may have been advantaged—both in the matchup and in the bracket—but Carvalho was going to go down swinging. He again found his back up against the wall when an instant-speed (thanks to ) gave Damo da Rosa the breathing room he needed to untap onto a clean board. He had a key for , and when a final took down Carvalho's Cavalier, Damo da Rosa was just one game away from winning.

But it wasn't meant to be. Starting on the play, Carvalho had his most aggressive start possible: two copies of . Damo da Rosa did his best to hold them off— and a topdecked took down the bosses—but the tokens stuck around and did more damage than you might expect. Not only did they continually pressure Damo da Rosa's life total, but they also made playing a Teferi to bounce one an unattractive proposition given it would then die to the attack back from the other one.

In the end, a desperate Damo da Rosa went searching for a to stay in the game, but even with digging for it he missed, giving Carvalho life.

That brought it to a third game. A win for Damo da Rosa made him the World Champion, while a win for Carvalho would force a final match.

Once again the players traded early cards, but as Damo da Rosa struggled to find enough lands to use his resources Carvalho found an opportunity to go for it all: he played a and discarded four cards to its ability searching for an untapped land that would give him victory on the spot.

In an excruciating moment for the Portuguese pro, he missed. But when Damo da Rosa too missed what he needed on his own draw step, Carvalho took down the match anyway and forced a final deciding clash.

Any cushion Damo da Rosa might have relied on was now gone: The winner of the final match would become the next Magic World Champion.

The first game played out like most of the duo's firsts—both players deployed threats and the board slowly ground to a stall. Damo da Rosa had and a growing army of tokens, while Carvalho was looking for a window to leverage the he had in play.

But board stalls almost always favor the control deck, and when Damo da Rosa hit an incredible three cards off —two copies of and —any chance Carvalho had to claw back evaporated. A few turns later an army of Pegasus tokens off had netted Damo da Rosa the game.

Magic is a game of calculated risks, and it's a fundamental truth that games will be won and lost on those risks. Sometimes, entire matches or tournaments will be. And that applies to the World Championship as well.

That's what happened in the final game. Carvalho kept a hand with nearly everything he wanted —he had two copies of and threats to go with it—but he needed to find land that gave him the mana he needed: Red. It was the kind of risk that professional Magic players have long become accustomed to, and if Carvalho found a red source in the first several turns he would have had an extremely powerful draw Damo da Rosa would be hard-pressed to stop.

Marcio’s 45% to hit red by turn 3. Think the keep wasn’t super atrocious (although probably still “correct” to ship), but feeling fatigued after like 9 bo3 matches vs the best players in the world is super reasonable.


Unfortunately, things don't always work out. Carvalho failed to find the land he needed, and as he drew uncastable five-drop after five-drop, Damo da Rosa steadily built a lead that a few turns later turned him into the World Champion, capping a career in which he's now won every title and accolade possible.

The conversation about the best Magic player of all time has been raging across the internet, and after the biggest victory of Damo da Rosa's career, it's hard to argue that he may have just earned that title.

"I started playing Magic when I was 8 years old, and you have no idea how many times I dreamed of this moment," an ecstatic Damo da Rosa said after the match. "I've gotten everything else but this moment, but finally I'm the world champion. Even people who don't play Magic know what that means. It's incredible." 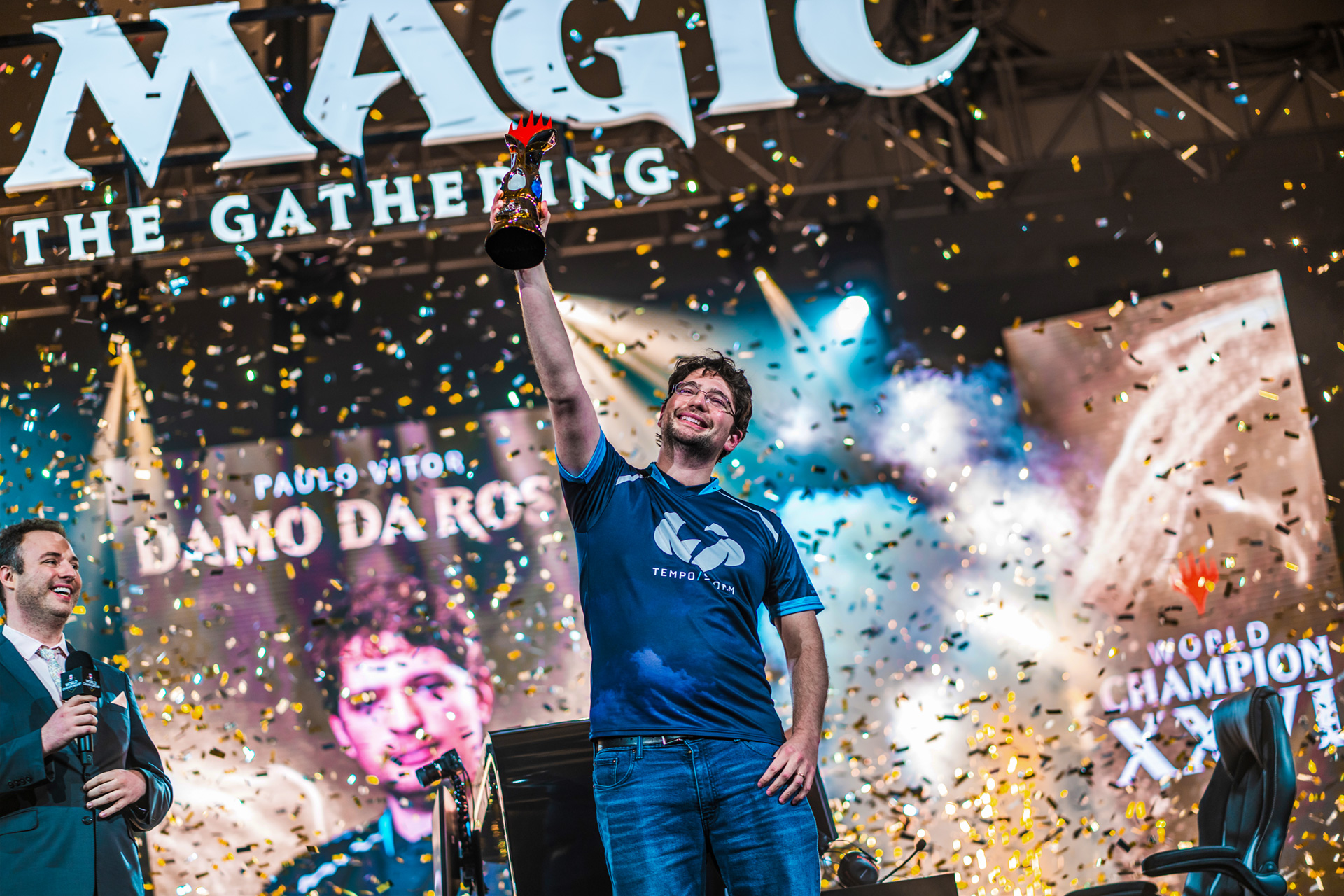