kicked off the first of three days of competition that will crown the next World Champion. For the 16 competitors in the field it was their chance at Magic immortality, both in the record books and on the potential card the winner can get their likeness onto.

It was also the culmination of the 2020-21 season of competitive play. It was a challenging stretch for many of the players competing in the World Championship from across the globe, and everyone who had a seat at the final tournament had overcome their share of adversity over the season to advance to this point.

The sixteen competitors shared something else in common: they overcame those challenges to face just 10 final rounds between them and a Top 4 at the Magic World Championship: Five rounds Friday—three Innistrad: Midnight Hunt Draft and two Standard—then five more rounds of Standard Saturday, followed by a Top 4 playoff to crown the winner.

At the start of Day One, all eyes were on defending champ Damo da Rosa, considered by many to be the best player to ever play. He turned in a dominating season following his World Championship XXVI run in at the beginning of 2020, and was undoubtedly the player to defeat heading in.

But the field was filled with the rest of the best-of-the-best. From Hall of Famers to the rising winners of the past year, the World Championship was the best competitive play Magic had to offer—starting with a trip back to Innistrad.

Draft is Back at Worlds

The World Championship featured something that the Championships and Gauntlets so far season have not: Draft, specifically Innistrad: Midnight Hunt Draft on MTG Arena. The return of Limited to the highest levels of play was well-received, and the players were ecstatic to draft with the World Championship on the line. Fans were abuzz with discussion of who the best Limited player in the field was, with two pods and three rounds to find out who would come out on top when it mattered most.

Innistrad: Midnight Hunt was itself a big topic of discussion, with Blue-Black considered the runaway best archetype in the format. With sixteen players playing in two pods, that meant there would be two undefeated 3-0 draft players after three rounds.

Two familiar faces emerged from the Limited fray. The first was Sam Pardee, who continued one of the most dominant runs in tournament history. Entering the World Championship, he had won the last two major events he played in: the Strixhaven Championship, followed by the Challenger Gauntlet where he was the top seed for its Top 12 playoff—and didn't lose a match.

Now at the World Championship, the longtime grinder continued his ascendant year—and he wasn't the only one. Out of the other pod came an undefeated Ondřej Stráský, not at all a surprise considering the dominance of the famed "Czech House" testing team across the season that included fellow World Championship competitor Stanislav Cifka.

And while it was Blue-Black that dominated the Draft predictions entering the event, both Pardee and Stráský pulled off their perfect runs with White-Black decks.

Pardee rode with to this 3-0, while Stráský went low-to-the-ground and featured three copies of alongside a bomb of his own.

"It was obvious that blue was the best color, but we knew everyone would know that so it would be hard to force," Stráský explained. "I was content. My draft was pretty easy with first-pick white super bomb () followed by a bunch of decent white cards. It felt like the power level of the table was pretty low, and I had one bomb rare and two bomb uncommons. The deck also played out really well and I think it was a bit better than it looked."

Draft was a big focus for Limited fan Pardee, and he demonstrated with a 3-0 run that he is at the pinnacle of his game right now.

"I prepared for draft by playing a mix of MTGO and Arena, and talking to Paulo and the ever-helpful Michael Sigrist," Pardee explained. "We did a Limited meeting reminiscent of Pro Tours of old, ranking all of the cards against one another and talking through what good versions of various archetypes look like. I was very happy with my play overall and how I drafted; it rarely felt like I was passing a better card than I was taking, which is my usual metric for how well I'm drafting."

As for the defending champ? Damo da Rosa got his title defense off on the right foot, putting up a solid 2-1 with his only loss to Stráský.

A First Look at the New Standard

With the World Championship coming just a few weeks after the release of Innistrad: Midnight Hunt and the field just sixteen total players, predicting the field of decks was an important decision to make. Players spent the weeks since rotation testing Standard, and even still there was a late-breaking Mono-White Aggro deck that gripped competitors' attention just a few days before decklists were due. Add in the fact that most of the top decks had disappeared with the rotation of Throne of Eldraine, and you had a format ripe for disruption. 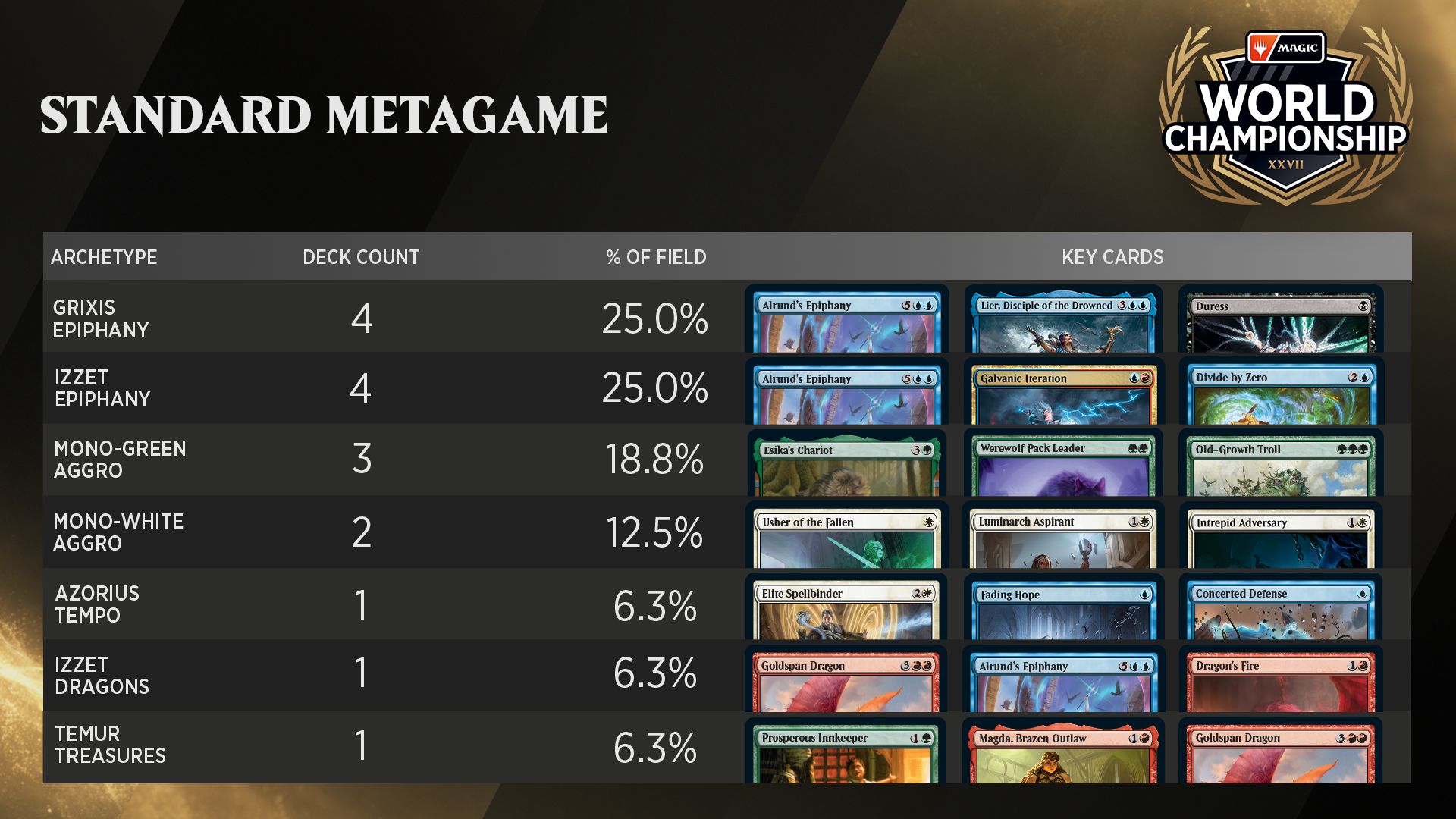 Kicking off Rounds 2, Pardee and Stráský prepared to square off to see who would remain as the final undefeated play. They were at inverted ends of the metagame, with Pardee leaning on in a go-low Mono-Green Aggro—the de facto "best deck" entering the tournament as it was resistant to removal and could end games before from the blue decks could take over.

But Epiphany took over anyway. Many prognosticators had pegged Grixis Epiphany as the breakout brew of the weekend, but Stráský looked good with the more straightforward Izzet Epiphany. And when he matched up against Pardee's Mono-Green Aggro, he showed off why was the defining card of Standard in the moment.

"We have the best deck," Stráský explained matter-of-factly. "I'm very happy with the metagame."

The biggest challenge for Stráský wasn't predicting the metagame, but rather practicing it.

"Our deck is hard to play and I lost some practice time due to food poisoning earlier this week, so I'm little worried about that," he lamented. "But I had some luck—I didn't expect to get five wins."

But after ending his day with a decisive victory over Matt Sperling's Grixis Epiphany, that's exactly what Stráský did. He stands alone atop the field at 5-0 and has the inside line to a Top 4 berth on Saturday.

Right behind him were two names you've seen already: Pardee and Damo da Rosa. While his fellow Hall of Famers in Seth Manfield and Gabriel Nassif struggled to rough Day One finishes, the defending champion rebounded after his early loss to Stráský and finished 4-1 with Mono-Green Aggro along with Pardee.

"I feel decently about Standard," Pardee explained. "Paulo and I decided that Izzet and Mono-Green were going to be the critical decks to beat, and threw a bunch of stuff at the wall trying to do that. Ultimately we couldn't quite find a way to do that, so we decided to play Mono-Green instead because we thought it was slightly favored against Izzet. I think we got that part right, but unfortunately the Grixis innovation from the team of 4 seems like it might be a difficult matchup for us."

That Grixis deck was the talk of the tournament after lists were revealed. While Stráský felt fine about the matchup, it was poised to be the biggest hurdle for the Mono-Green players on Saturday. One of the reasons for the deck's success was the addition of in the deck, brought by Sperling and Eli Kassis, who at 3-2 are lurking just behind the leaders.


A 3-2 record leaves plenty of room to catch the leaders, but Sperling knows it will be an uphill climb.

"I feel pretty good about Standard, but it can be pairing-dependent," he said. "I think we might be a little bit weak to other Izzet decks but a little bit stronger vs. aggro than they are, so I need aggro to prey on other Izzet decks, and I need to get paired versus aggro if I want things to break my way. But even the aggro decks are always dangerous so you have to draw well and play well in every single match in this Standard format."

Five rounds of Standard are all that remains before the Top 4 is set at Magic World Championship XXVII. With half the field tied for fourth at the end of Friday, anything can happen when play resumes again at 9 a.m. PT October 9, live at twitch.tv/magic!