And then there were four. 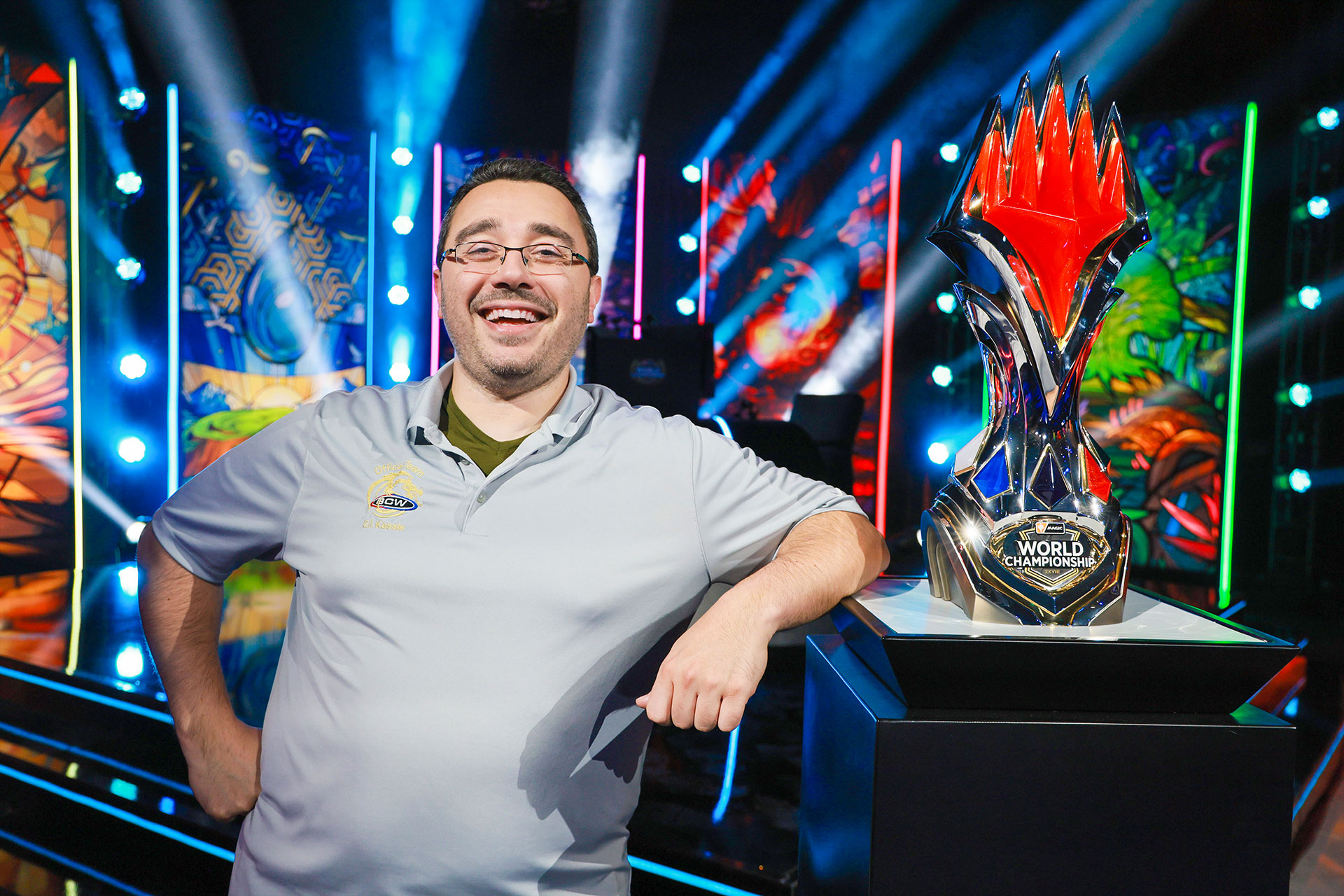 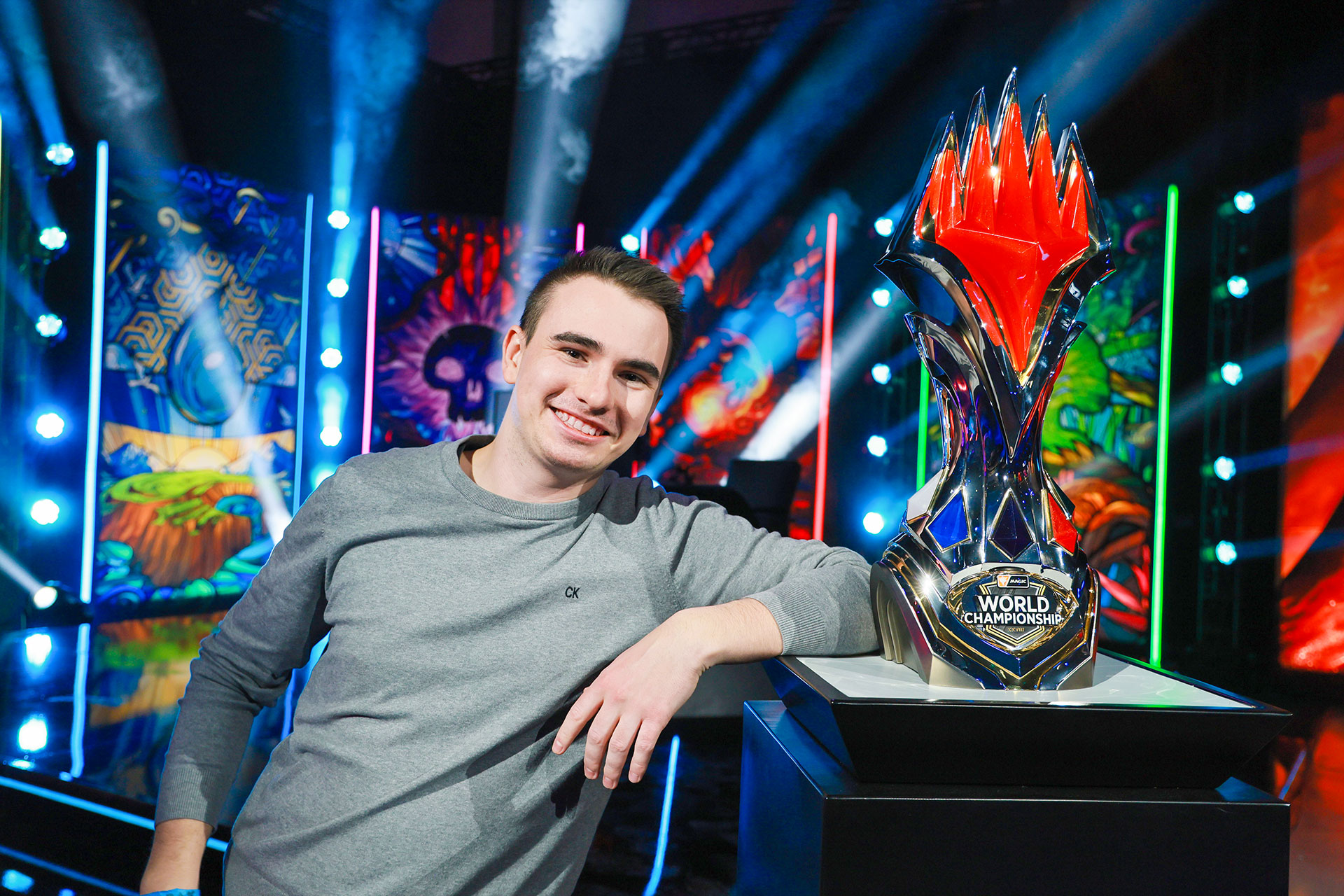 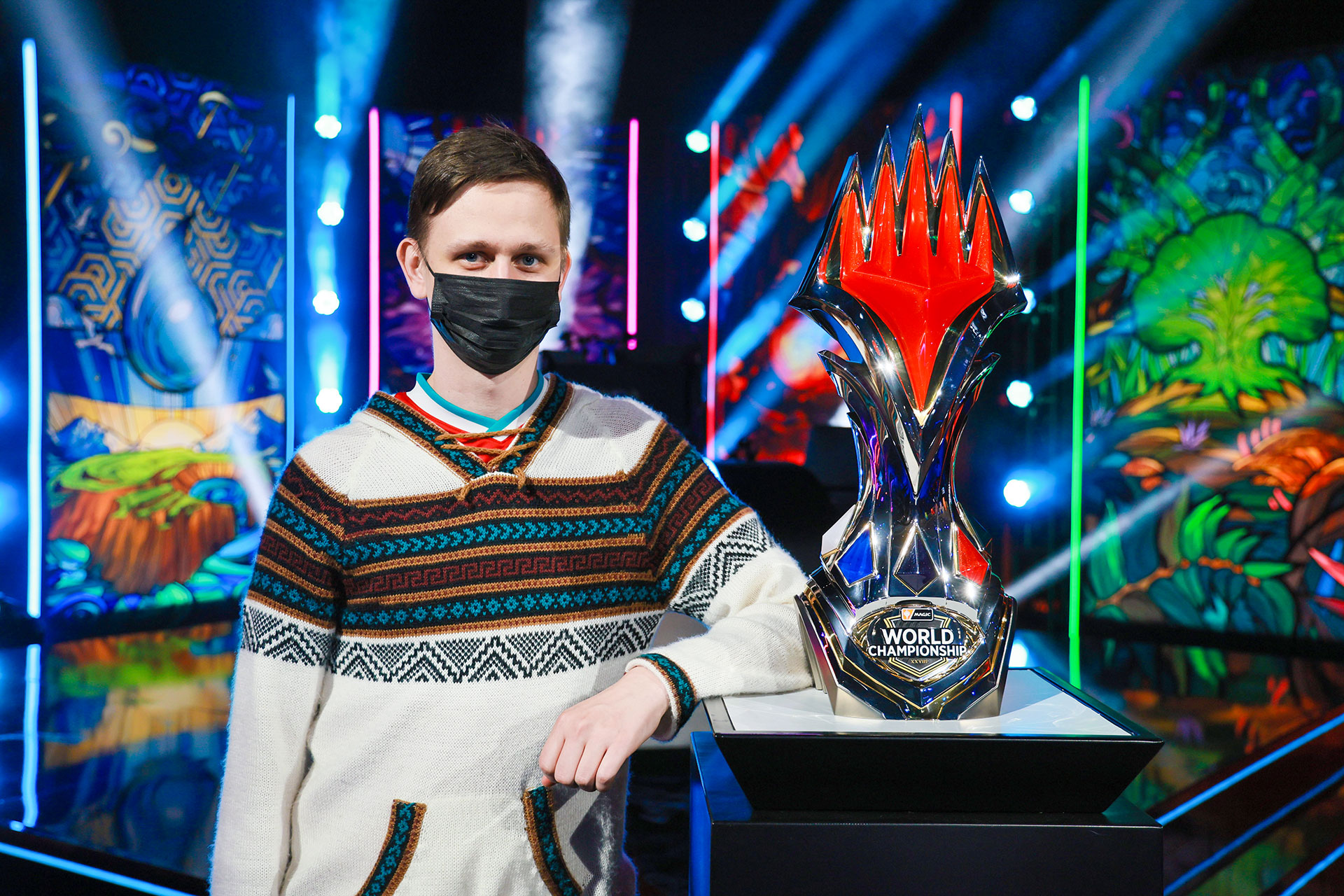 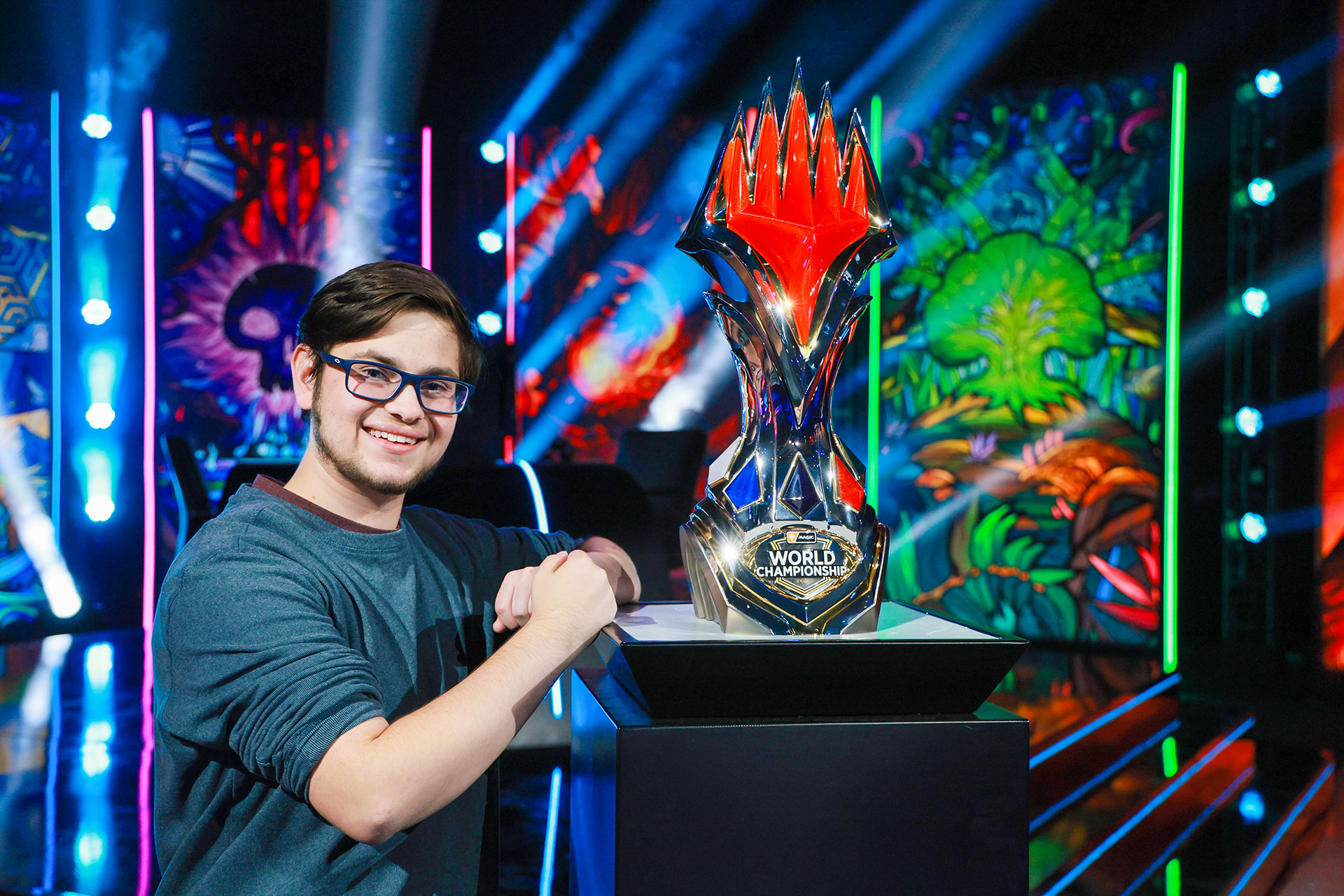 
Magic World Championship XXVIII kicked off on Friday with 32 competitors who spent the past year working toward this moment. We were treated to two days of incredible competition through three formats that all brought their own challenges, not to mention the nerves that only an event like a World Championship can bring.

Now here we are, with the final four from the fracas battling it out in a double-elimination bracket for the title of World Champion.

Here's how the Top 4 played out. 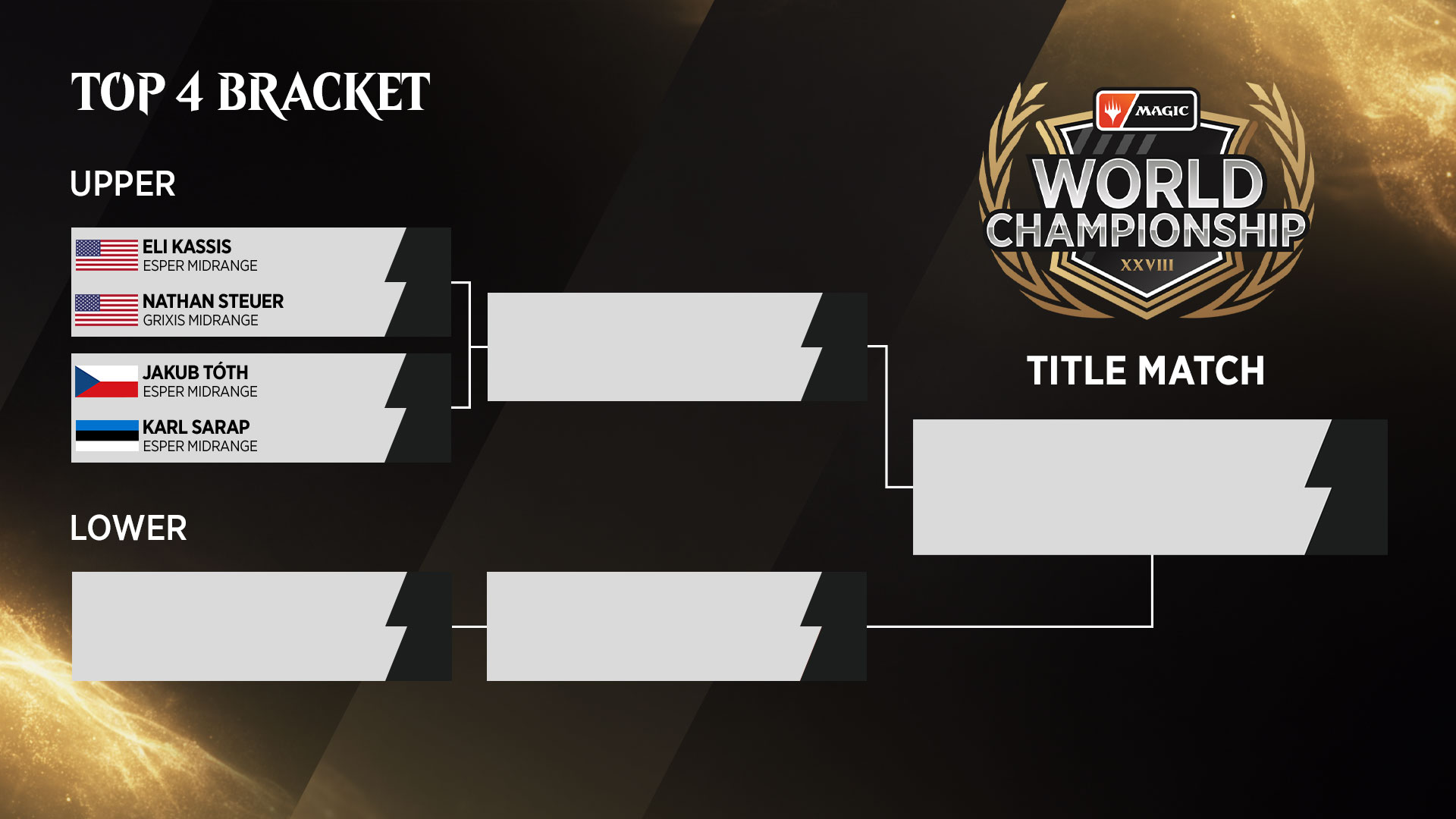 Round 14 of Magic World Championship XXVIII came packed with as much drama as possible, as many final rounds do. In this case, and no players secured the 11 wins nededto guarantee themselves a Top 4 spot, things stood more open than usual. That brought on the biggest match of young Nathan Steuer's life: a clean win-and-in against Eli Kassis, who stood atop the crowded standings.

The result was a heartbreaking match for Steuer, who came up just short. But when the dust settled and the tiebreakers were sorted out, it was Steuer who occupied the fourth and final spot on the Sunday stage, following Kassis after he secured the top slot. That meant that the first match of the Top 4 bracket would be a rematch of Round 14, and an opportunity for Steuer to avenge his Historic loss with a trip back to Standard.

After the players split the first two games, it all came down to a third to decide the match. And as players traded resources back and forth it looked like the Grixis Midrange deck piloted by Steuer would do what it was designed to do: grind out the Esper Midrange deck that was piloted by 69% of the field and the three other members of the Top 4.

But changed all that. Kassis landed the bomb Angel and used it to stave off defeat long enough for Sheolded, the Apocalypse to arrive. Another incredibly close match between the pair, and another going to Kassis.

The other match of the semifinals featured Sarap and Tóth battling in an Esper Midrange mirror. Or, more accurately, the mirror. Both players flooded the board with tokens and the grindy games were everything the midrange mirror promised to be. Combat became increasingly tricky and each player looked for a way to go over the top.

After a narrow victory in the opener, Tóth found a way to go over the top in the next game, though perhaps not in the way he expected; Sarap got stuck on three lands and a much healthier mix of mana allowed Tóth to slowly pull ahead on board until his army of tokens grew too large for Sarap to match.

Next up was the Upper Finals. The winner between Kassis and Tóth would move on to the best-two-of-three-matches Title Match while the loser would await either Steuer or Sarap from the Lower Semifinals.

The two teammates had met twice previously in the tournament, splitting the matches with Tóth coming out on top in Standard. But in the rematch it was all Kassis all the way, as he leveraged a stream of high-level threats against an off-balance Tóth forced into a reactive role.

The second game played out similarly, with Sheolded doing the heavy lifting to prop up Kassis while did what it has done all weekend: sculpt the perfect hand while growing a board presence. The curve out allowed Kassis to take the driver's seat in the deciding game, until arrived to seal the deal.

With that, the first Title Match participant was in. Kassis, who has been a longtime Pro Tour player with eight Grand Prix Top 8s and two wins to his name, has truly broken through over the past several seasons with two Top Finishes including a victory at the Neon Dynasty Championship. Now he found himself to add the one trophy he's missing: the world title.

With that, all that remained was to determine who would meet Kassis in the World Championship Title Match. 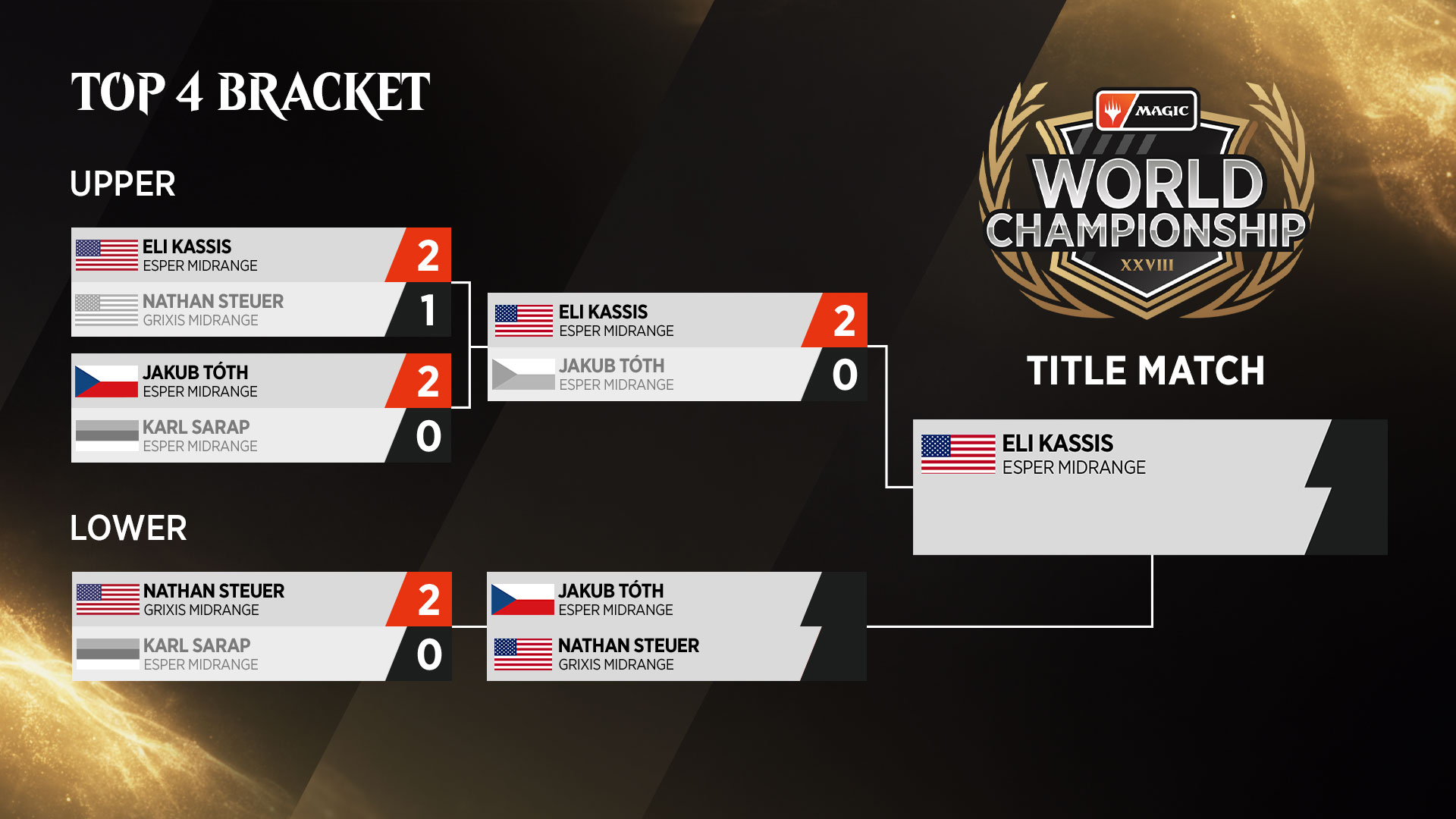 It began with Steuer and Sarap, where an unfortunate day for Sarap continued as he failed to keep up with Steur's value engines in the first game, then fell apart in the second as he couldn't find an answer to .

The powerful enchantment was the reason Steuer chose to play a Grixis deck over Esper, and it paid off with a quick 2-0 victory that sent Steuer to the lower final against Tóth.

In the Title Match, Kassis awaited the winner. It would be his teammate Tóth, or a prodigious competitor who took the online world by storm?

Steuer wanted another shot at Kassis, and thanks to that's exactly what he would get. Steuer's contorted manabase supported the difficult-to-cast sorcery, but doing sopaid off the Lower Finals as he was able to cast the game-winning bomb after both players had whittled each other out of resources.

A long and complex first game had gone Steuer's way, and the next game proved it was his day: Tóth never found a third land, and a few turns later Steuer won his way into the Title Match and one more rematch against Kassis.