Hello and welcome back to Metagame Mentor, the weekly column in which I highlight the decks to beat and the latest Constructed format developments on the path to the Pro Tour. Today, I'll cover the third Regional Championship weekend, which featured tournaments for the South America and Chinese Taipei regions in the Pioneer format.

Top eligible players from these Regional Championships earned an invitation to the first Pro Tour in 2023, held during MagicCon: Philadelphia on February 17-19. But you don't have to be qualified for the Pro Tour to enjoy this festival. MagicCon: Philadelphia offers something for everyone—immersive experiences, exclusive play opportunities, cosplay, special guests, artists, panels, a party, incredible products, and more. The event celebrates all things Magic: The Gathering, and tickets are on sale right now.

Congratulations to the Two Regional Champions!

Alejandro Sepúlveda won the South America Regional Championship with Mono-Red Aggro. His victory comes with an invitation for the first Pro Tour in 2023, as well as next year's World Championship!

You can find the Top 8 bracket, photos, and more on the South American Regional Championship coverage page.

Competition was fierce, with 203 players in attendance to vie for four total invitations to the Pro Tour. The region-dependent number of Pro Tour invites was determined by Wizards of the Coast in early 2022; the specific structure and number of Regional Championship Qualifiers is set by Magicsur Chile. It's great to see the passion of the South American Magic community as many players enthusiastically traveled to compete against the best players in their region. 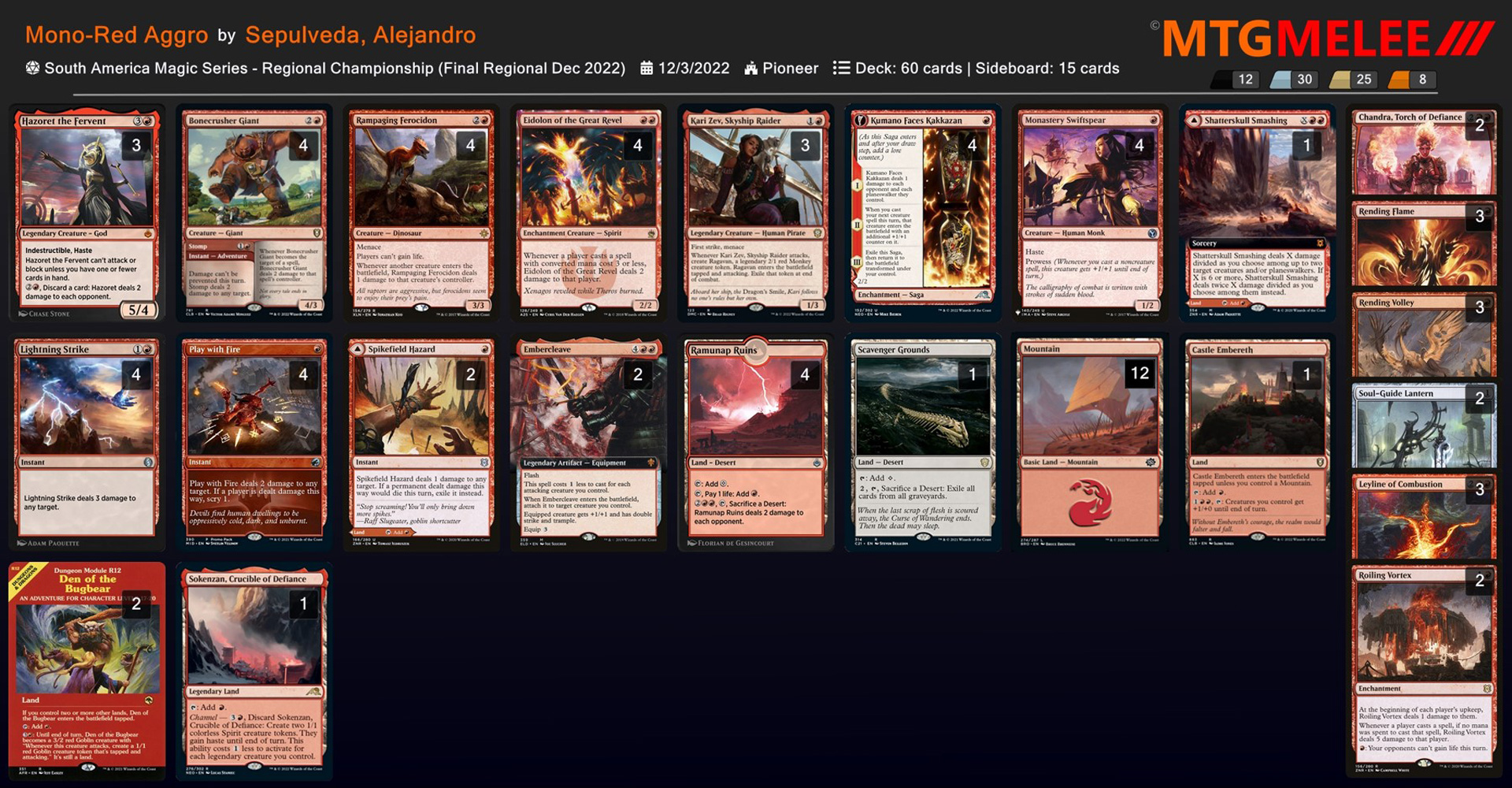 Mono-Red Aggro hadn't put up notable results in recent weeks. But with his victory, Alejandro Sepúlveda put it back on the map. "I have a lot of experience with the deck so I was locked on [Red Deck Wins]," he said when asked about his reasons for choosing the deck. "I think that experience can give me a greater edge than playing a better deck I don't know how to play."

Sepúlveda's list offers both board presence and burn. is excellent against Rakdos Midrange, as it's hard to answer and helps push through . The constant fear of is also very real, yet Sepúlveda doesn't go all-in on the legendary equipment with cards like and . Rather, he retains a healthy dose of burn spells, supported by and to put additional pressure on the opponent's life total.

"During testing I noticed that lines up really well vs most of the meta," he said. "The dino dodges , , and and forces your opponent to follow tricky lines where they stop attacking to leave up blockers that usually end up getting bolted."

His sideboard has some spice as well. As he explained, is "your best card" against Rakdos Midrange and Izzet Phoenix. "They can't interact with it; see it as some sort of one-sided ." Sepúlveda's experience with the deck allowed him to pick the right cards for the metagame, and it paid off!

He took down the tournament with Rakdos Midrange, earning seats at Pro Tour I and the World Championship! pic.twitter.com/cK0F9bw39X

Jim Tim Lee, one of the more experienced competitive players from his region, won the MIT Championship with Rakdos Midrange. His victory comes with an invitation for the first Pro Tour in 2023, as well as next year's World Championship!

You can find the Top 8 bracket, photos, and more on the Chinese Taipei Regional Championship coverage page. In total, 55 players were in attendance to vie for two Pro Tour slots.

"If you can't beat them, join them!" Jim Tim Lee explained. Indeed, Rakdos Midrange had been the most popular deck archetype in the preceding Regional Championships weekend, and that trend continued globally.

His build, which went undefeated throughout the tournament, is a near-exact copy of Rei Hirayama's list that won the Japan/Korea Regional Championship. in the main deck surely helped in beating Izzet Phoenix. The only difference was Jim Tim Lee's use of instead of the second Swamp. This increases the likelihood of drawing a perfect mix of lands and spells.

The Metagame and Win Rates

Based on all decklists from both Regional Championships held last weekend, I determined the combined metagame share of every archetype. I also calculated their non-mirror, non-bye, non-draw match win rates. I used my own algorithms and definitions to assign archetype labels, thereby sidestepping any potential mislabeling on MTG Melee. Let's take a look!

The overall metagame was quite similar to the one from the preceding weekend. The most notable difference is an uptick in both Mono-White Humans and Azorius Control. While these decks look to be on an upward trend, sample sizes for the number of players and number of matches were relatively small. So it's hard to draw significant conclusions about either popularity or performance. Indeed, most of the winrates were not different from 50-50 in a statistically significant sense.

Likewise, many Mono-White Humans players added main deck to stop , and many Azorius Control players increased their count to destroy . Tomik, , and all answer as well, thereby providing splash damage against the combo decks. Even though combo won the Showcase Qualifier on Magic Online, it didn't have a good weekend at the Regional Championships.

Rise and Success of Anti-Rakdos Decks

Rakdos Midrange remains the most popular archetype, but like any archetype in Pioneer, it's beatable. More and more players are flocking towards cards or strategies that line up well against Rakdos Midrange, and many found success last weekend. 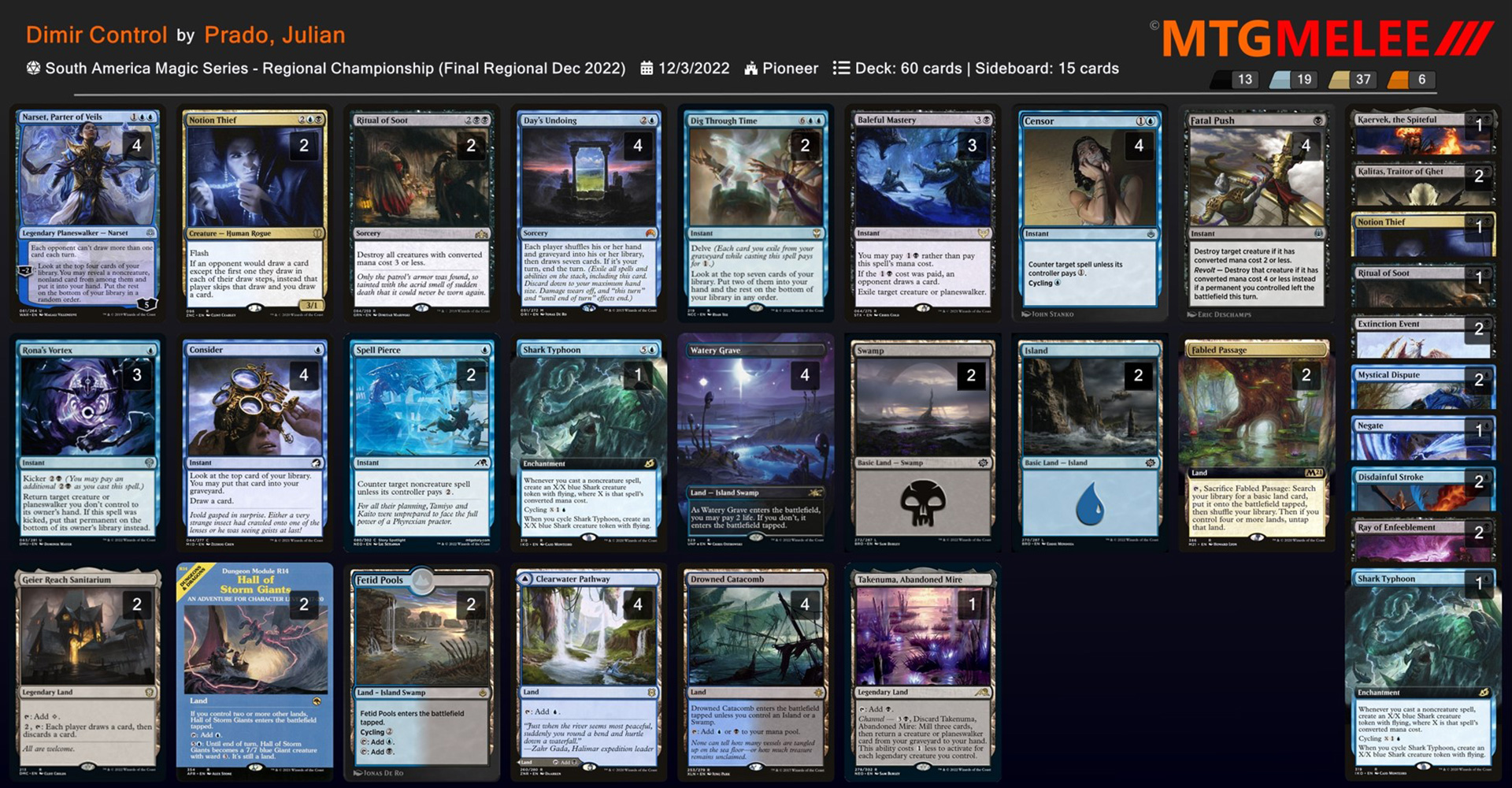 One of the biggest new developments to come out of the Regional Championship in Santiago de Chile was that two players with nearly the same Dimir Control deck did exceedingly well. Andrés Camargo narrowly missed Top 8 at 6-2, while Julian Prado made the finals and earned a Pro Tour invite.

The unique element in their list is four copies of . When you control or , the symmetry is broken—you get a fresh hand of seven new cards while your opponent receives only one or zero cards. You can be the ultimate villain by first bouncing one of their creatures with , then forcing your opponent to draw a card via the alternate cost on , and finally casting . This leaves them with nothing. Then, immediately after they draw a card in their draw step, you activate , effectively locking the opponent out of the game.

The two players on this version of Dimir Midrange went 5-0 against Rakdos Midrange in the Swiss, which is certainly promising. Their lists were extremely similar, with only a few small differences: Andrés Camargo had a third Island and an instead of a second and a second Swamp in the main deck, as well as instead of in the sideboard. I'm interested to see if this brew from South America will catch on globally. 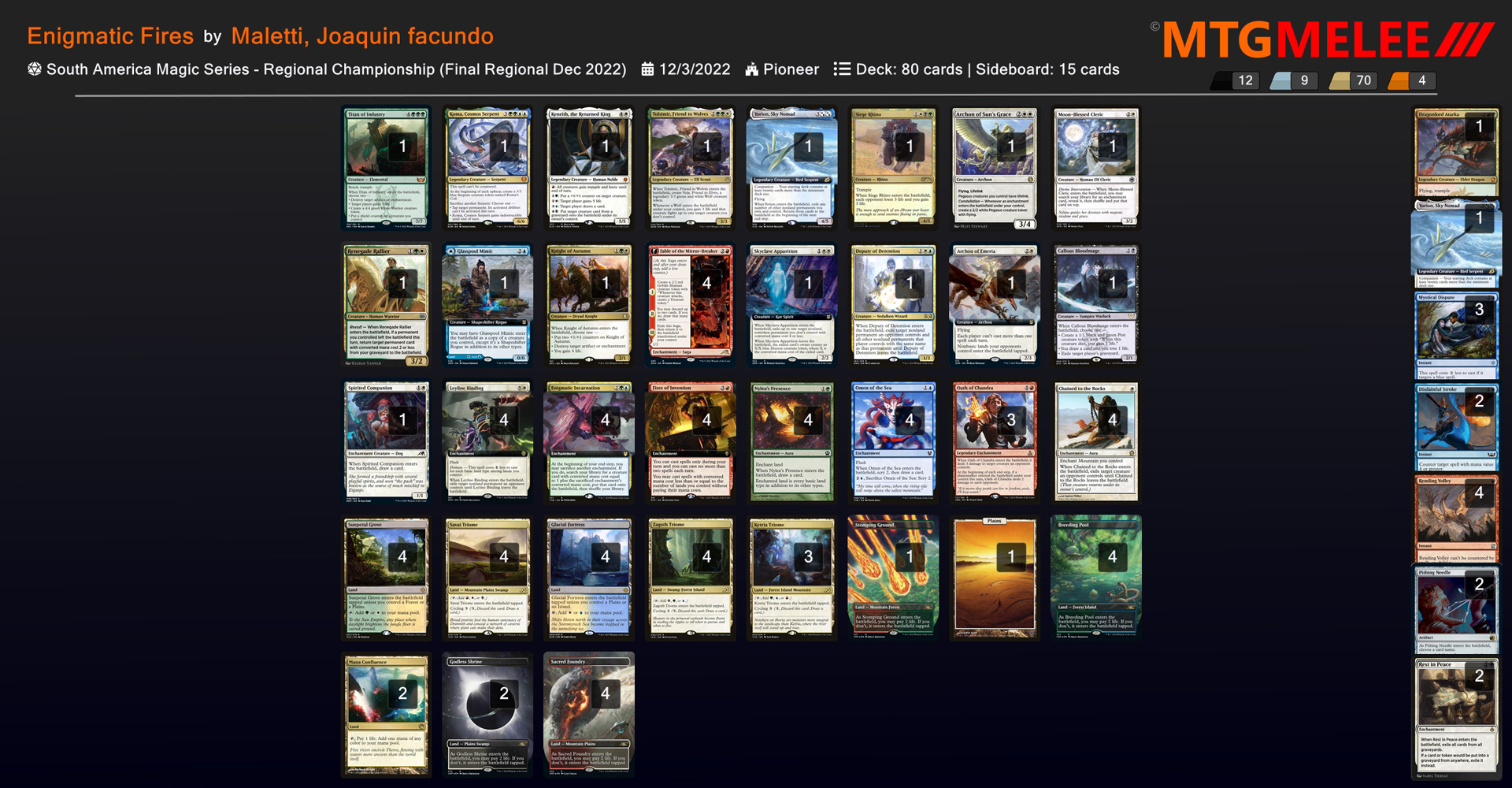 Another major story to come out of the Regional Championship in Santiago de Chile was that there were two copies of Enigmatic Fires in the Top 8. Luis Mesa lost the quarterfinals, whereas Joaquin Maletti made it to the semifinals. The archetype preys on Rakdos Midrange because effects like or are not available in red or black, so Rakdos decks are traditionally weak to enchantments.

In Pioneer, and are some of the most powerful enchantments available, and they can overpower Rakdos Midrange opponents with ease. Whether it's fetching on turn four or casting a free with activation mana up, Enigmatic Fires will be well-positioned as long as Rakdos Midrange remains the most popular deck in Pioneer.

Joaquin Maletti's version features instead of . This is superior for mana base reasons, as black is basically a splash and it's easier to cast on turn two. 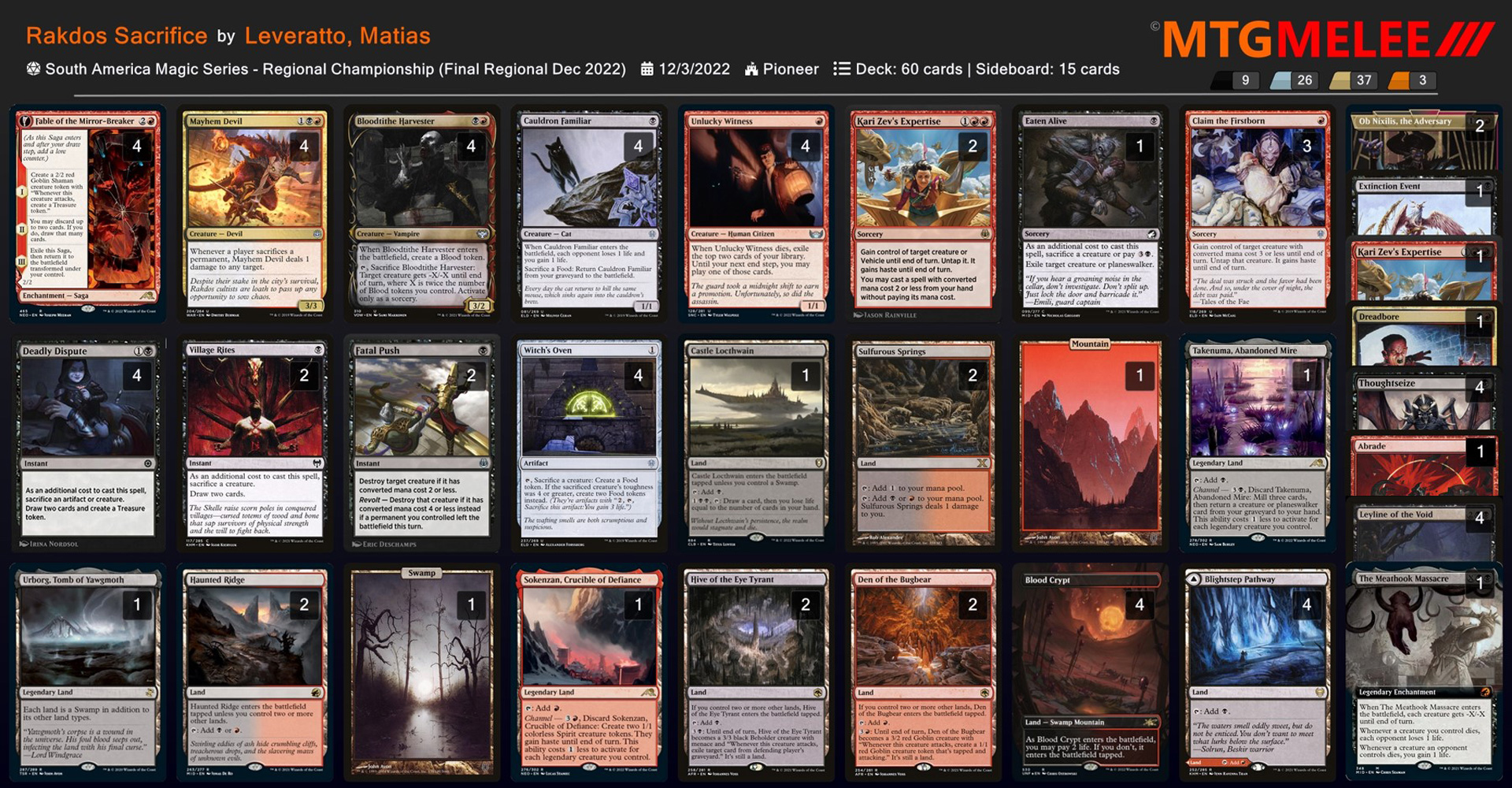 Rakdos Sacrifice is another archetype that lines up well against Rakdos Midrange. The + + engine will often bury them in the late game, and if they try to generate early-game card advantage by Stomping one of your creatures, you'll just sacrifice it to . and also cleanly answer and , provided you have a sacrifice outlet. 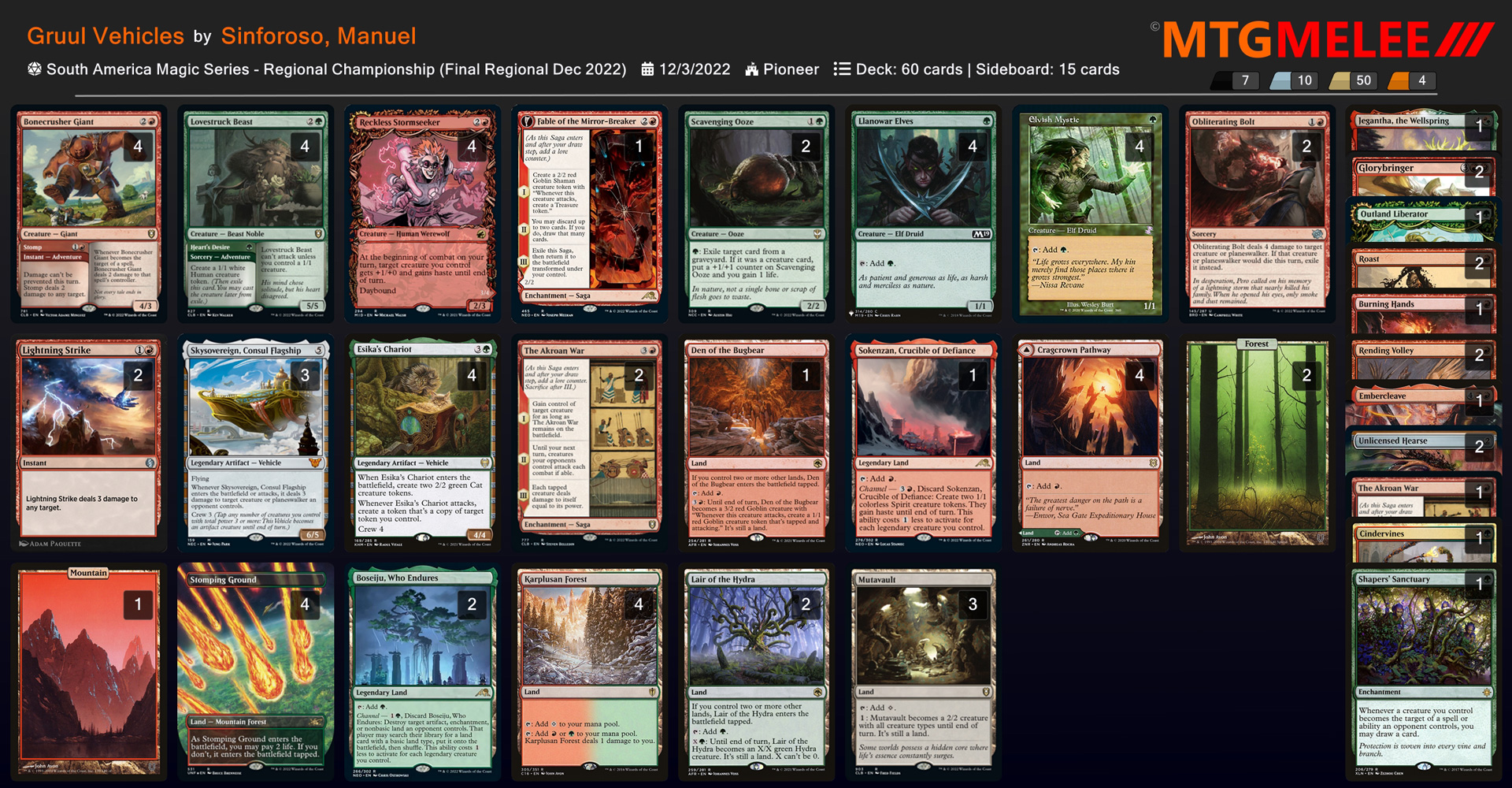 Finally, a section on ways to beat Rakdos Midrange wouldn't be complete without mentioning the best deck: Gruul Vehicles. It had the highest win rate against the field out of all the top-tier archetypes, and it's one of the most reliable ways to crush Rakdos Midrange.

Manuel Sinforoso made the Top 8 at the South America Regional Championship with his version of Gruul Vehicles. His main deck features a few copies of and , which provide a lower curve compared to the stock version that maxes out on . Sinforoso's sideboard features a little bit of everything; is rising in popularity, and is great against midrange decks.

As long as Rakdos Midrange remains on top, Gruul Vehicles will be a solid choice, and Sinforoso's list is a good place to start.

The schedule for the remaining Regional Championships in this first round is as follows:

Looking ahead even further, in about ten months from now, Magic World Championship XXIX will be held on September 22-24, 2023 at MagicCon: Las Vegas. The field of competitors, who will vie for the total prize pool of $1,000,000, currently features:

With every subsequent event, the field for next year's World Championship is firming up with more and more great talent. The field will be extended to around 128 players based on the results from subsequent championships and Pro Tours in the 2022-23 season. Detailed invite criteria can be found here. But no matter where you're from, you'll have your regional champions to cheer for.