Day 1 of the first Mythic Championship played on MTG Arena is in the books, and it was a heck of a debut. There were 68 players competing this weekend at Mythic Championship III in sunny Las Vegas, and 12 of them emerged from the melee on Friday to join the four Magic Pro League division winners to make up the field of 16 that will return on Saturday. 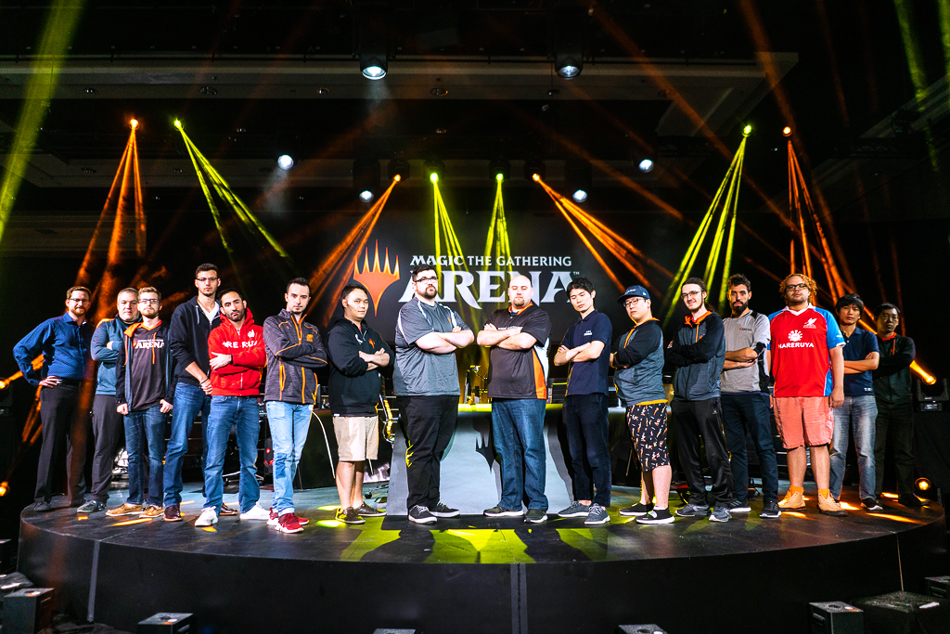 The master of Standard took care of business early. Nelson rattled off the first (and only, so far) perfect split in Magic Pro League history, and as a result earned his way into the Top 16 that will compete on Saturday.

Nelson first made a name for himself playing online under the name FFfreak, and it wasn't long before he took the paper Magic world by storm, earning the 2010 Player of the Year title in tiebreaker playoff fashion.

He'll seek to add another title to his resume as he looks to continue his run of Arena dominance.

The consummate grinder. BBD spent a decade making incremental gains in his career before breaking out by winning the 2016 World Championship over Marcio Carvalho in one of the greatest championship matches ever, with one game of the best-of-five match taking more than an hour.

Since then, he made it his only goal to get back to the top, and he has been on a tear in the last year. He made it back to Worlds last season and finally notched his first Top Finish at Mythic Championship II last month, a Top 8 tournaments in the making.

He won his division in the Magic Pro League, and joins his friend and testing partner Nelson in the Top 16.

Yukuhiro is one of the game's most creative deckbuilders – all four of his Top 8s have come on unique and while he didn't go too far off the rails this weekend (he's playing the Bant Ramp that has taken Standard by storm in recent weeks), he's still playing a deck with a lot of X-cost spells.

Yukuhiro is one of the most joyful players while competing, and we'll all have a chance to watch him on Saturday as he enters the Top 16 directly after winning his MPL division.

One of the season's best underdog stories continues. A prodigy as a child, Sato stepped away from the game for a few years before making a splash upon his return in 2017, when he attended a Grand Prix with his roommate (and Pro Tour Battle for Zendikar champion) Kazayuki Takamura. Both players would Top 8 that event and Sato would ultimately win the tournament. He's been on a storybook run since, and will enter the Top 16 after winning the last division of the MPL.

Greg Orange likes to do one thing in Magic: play control decks. And no one plays them better.

The Pro Tour 25th Anniversary champion was the first to qualify for Day 2 here at the Mythic Championship, rattling off a perfect 6-0 run with his beloved Esper Control.

It wasn't that long ago that 6 Pro Points was all it took to be the leader in Argentina. But times have changed, and Leveratto's unlikely run to the Top 16 is just the latest sign. Leveratto was one of the better players in the country half a decade ago, but it was *Arena *that brought him back. He qualified through online play and then took down Pro Tour champion Simon Goertzen in an exciting Round 7 match to qualify for Day 2.

Anything there is to accomplish in Magic, Kai Budde has done. He needs no introduction, but Budde is making a statement this weekend anyway – he's just as dangerous as he ever was. He prepared for the tournament with Nelson and Braun-Duin, and now the legendary player will join them on the Top 16 stage.

Another longtime player and legend in his own right, Yasooka took up competitive Magic in 2005 after seeing his fellow Japanese players win the individual and team World Championship along with Player of the Year. If they could do it, why couldn't he?

Not only could he reach that level, he would go on to notch six Top Finishes en route to being inducted into the Hall of Fame. Now he'll look to add a Mythic Championship Top 4 to that list.

Rolf has one of the most unique stories of anyone in the MPL. He planned on giving up professional Magic after completing his law degree, but instead he made the semifinals of Pro Tour Ixalan, which he had planned to make his final event.

Now he's a member of the MPL and looking to add even more.

No one has had a path to this Mythic Championship quite like Görtzen. He has been to the pinnacle of the Magic world, and he has found out what Magic meant to him after winning it all. From a champion to an expert commentator and now a Mythic Championship Top 16 competitor after winning an MTG Arena qualifier, Görtzen is a force to be reckoned with this weekend. And he's sporting a pretty cool shirt.

Another Hall of Famer, another Top 16 appearance – Raph has accomplished nearly everything possible in Magic, but this Top 16 comes with a little extra motivation for the new father. Lévy has been around the game as long as anyone in the world – he holds the record for most Pro Tour/Mythic Championships attended – and he's proven that he's just as comfortable on Arena as he is in paper.

At 24, Depraz is one of the younger members of the Top 16. But even though he's only been playing the game at the highest level for a short time, he's put on an impressive run. A Top 8 at Pro Tour Rivals over Ixalan and a win at Grand Prix Warsaw last year earned him a MPL berth, and Depraz is looking to take the next step this weekend.

Make it three-for-three for the Team Grand Prix Nagoya champions, as Yamamoto will join Yukuhiro and Sato in the Top 16. The other 13 competitors might consider themselves lucky these three can't team up again.

A master of the unexpected. Three of his Top Finishes have come in Modern, each time with a different deck. He put together five such finishes in a span of just four years, one of the most dominant runs in modern history that helped him earn a spot in the Hall of Fame.

The kid, they called him.

Well, he's not that same kid that won back-to-back World Championships 2013 and 2014. Shenhar has come a long way since then, and after a break from the game he returned with a vengeance, earning his spot in the MPL and now adding a Mythic Championship Top 16 finish – at least. And if there's one person in the field (beside Kai Budde) whom nobody wants to meet in the finals, it's Shenhar.