When it comes to a tournament Day Two, it's hard to imagine stakes higher than what we saw Saturday at the New Capenna Championship. Take your pick of which storyline to follow, Day Two saw:

Here's how it all went down.

The Top 8 of the New Capenna Championship

Let's start at the top. After seven rounds of play on Friday, it was Stefan Schütz and David Inglis who led the field entering Day Two, and they squared off in the first major match of the day battling to be the tournament's last undefeated player.

"Tangrams," as Inglis is known online, took the victory and never looked back. Not only did he secure a World Championship invite on season points but he went on to qualify first for the Top 8, adding even more intrigue to the World Championship race.

🎉Congratulations to the #SNCChamps Top 8!🎉

See these stellar players in tomorrow’s double elimination race to the trophy! pic.twitter.com/5CyvGu2doD

Here are the players who joined Inglis in the Top 8, along with the decks they'll bring to battle on Sunday.

Inglis ran away with the Swiss rounds, securing the top seed with just one loss, while the final four members of the Top 8 advanced on tiebreakers. And in a tightly bunched field, it wasn't clear who would make the cut, even to those involved in the race.

Turns out I'm not 10th... My mother in law following the event on melee let me know I actually sneaked into the Top 8 after I was already going to sleep :) #SNCChamps https://t.co/vq0dXXqlZS

For those not already locked for the World Championship, Sunday's elimination rounds will determine the final six seats.

Getting there took a mix of Standard and Historic prowess, and the players delivered on the high drama in a wild sprint to the finish through a Historic format overflowing with cats and birds.

But the weekend belonged to Golgari Food, and players who chose to throw the cat into the spent the day squaring off against the familiar Izzet Phoenix deck in a wildly swingy play pattern familiar to fans of the format.

Not that there weren't surprises along the way in both formats, from Standard land destruction decks to to combos with .

Speaking of Championship seats, while every player competing Saturday was in the hunt for the New Capenna Championship Top 8, the race with the other biggest stakes was for players chasing an invite to Magic World Championship XVIII. A handful of the available spots were claimed on Friday, and the race for the final spots for League and Challenger seats continued Saturday.

The first player to secure a spot was Tristan Wylde-LaRue, who has turned in an incredible underdog season and with another strong tournament appearance secured his spot at the World Championship early in the day.

I didn't think we'd ever do better than we did at the mutate PT, but we completely crushed it this weekend. Crazy to think about how far we've come in the last two years.

A very satisfying way to close out this era of online tournaments pic.twitter.com/AQV6dBoHZd

🎉Congratulations to Tristan Wylde-LaRue, the fourth Challenger to lock up a seat at #MTGWorlds!🎉

While Wylde-LaRue showed what the challenger side was bringing to the table, legendary player Shota Yasooka was the next to lock his place. Yasooka, whose Hall of Fame resume lacks only a World Championship title, said that making the World Championship field was his primary goal this season.

🎊Congratulations to Shota Yasooka, the first player to secure a League invite to #MTGWorlds!🎊

Nathan Steuer was the next to qualify, and as the rounds played out Inglis also secured his spot, bringing the race down to the wire for the fewer and fewer remaining seats.

Here is the final list of players who have earned a World Championship spot from the New Capenna Championship–so far.

It's "so far" because things are not yet played out. With the Top 8 on Sunday, the top six players will automatically earn a spot at the World Championship and their already-clinched invites would pass down in multiple ways.

It's still an intense race for all involved, including those forced to watch from the sidelines on Day Two.

Well, almost all. Pro Tour champion Greg Orange took the possible career-defining news in the way fans have come to love from the Citrus Assassin.

All attention now turns to Top 8 play on Sunday, with a double-elimination bracket both determining a winner for the New Capenna Championship as well as who will take the final few seats available at Magic World Championship XVIII. With the top six finishers automatically qualifying, a strong Sunday run by several players could create invitation opportunities for those just back in the standings.

🎊Congratulations to the five League players heading to #MTGWorlds!🎊

See you at Worlds! pic.twitter.com/PnSVvh4CMD

🥳Congratulations to the eight Challengers heading to #MTGWorlds!🥳

See you at Worlds and congrats again on a great season! pic.twitter.com/GthjXtNvC7

As for the Standard matchups that will help to define the 2022 season, there's a wide range of colors and strategies competing:

Inglis' Storm deck took the tournament by, well, storm, but in Sigrist's Grixis Vampires helmed by and Merkel's brew there are some refreshed archetypes vying against the swirl of efficient creatures and removal spells that make up the midrange decks. 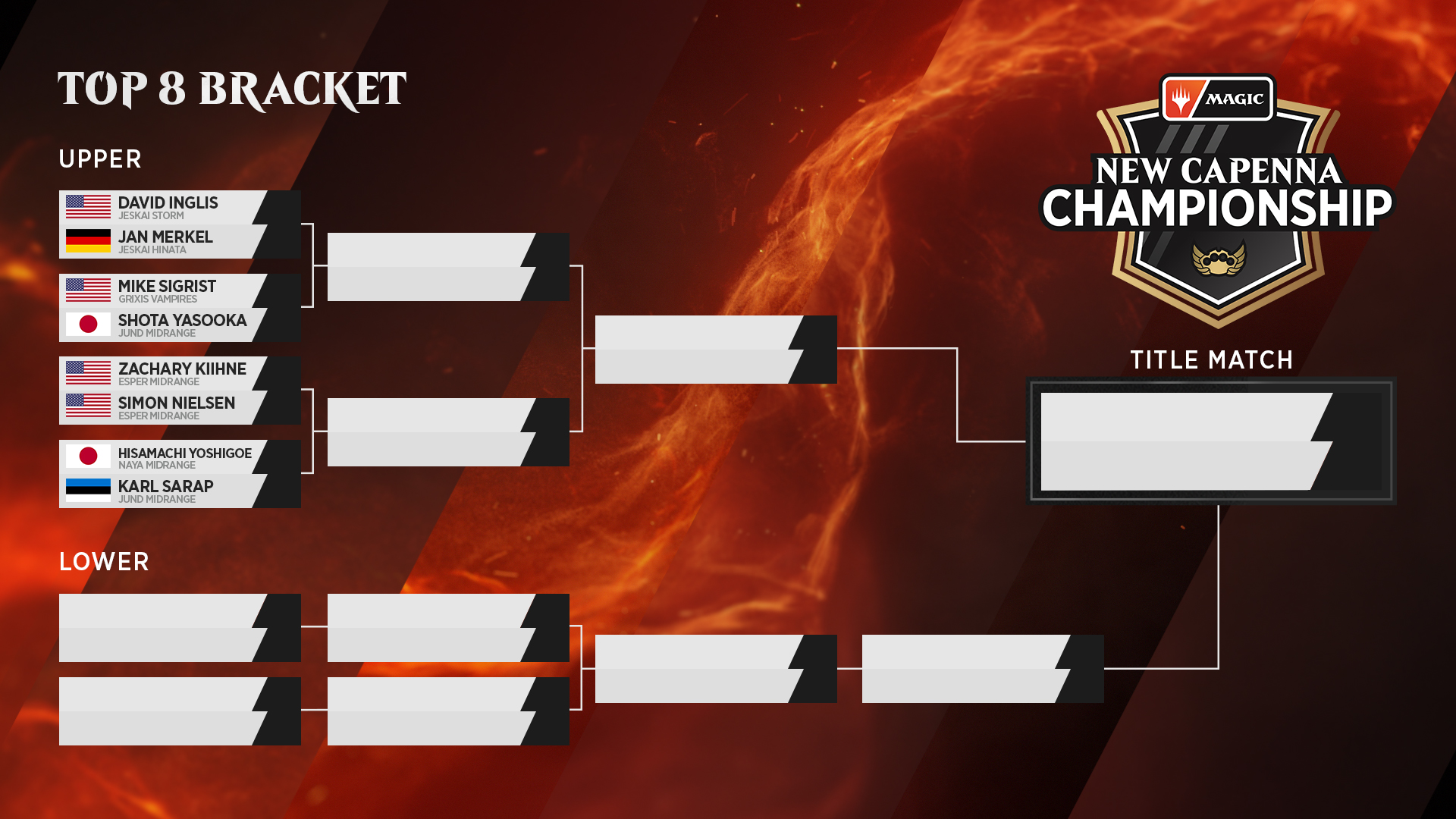 From the game's brightest young talents to the Hall of Famers and Players of the Year, the Top 8 of the New Capenna Championship is stacked.

One more day of competition will finalize the Magic World Championship field and deliver a title to the winner of the New Capenna Championship as well. Coverage begins at 9 a.m. PST May 22 at twitch.tv/magic!