192 players packed decades of Draft experience in their mental suitcases, but Pioneer is shiny, fresh, and new, so there was a ton of uncertainty coming into the weekend. And with uncertainty comes excitement—the Magic community has embraced Pioneer with a passion, and we're all looking at fantastic weekends in Brussels, here in Nagoya, and next weekend in Phoenix.

So, let's see what our players from 20 different countries brought to the Pioneer table in Nagoya:


Is Inverter A Converter?

Well. There is a clear winner here, in terms of representation at least, and that winner is Dimir Inverter. Many players I've talked to this weekend have likened it to the 'bringing a knife to a gunfight' where Inverter is the gun, and everyone else is looking blunt rather than sharp. It's not hard to see why. Inverter invalidates a fair amount of what 'normal' people think of as 'normal' Magic. Want to cast a big fat creature ahead of the curve? Sure, that's fine. Efficient cheap creatures attacking for two? That might get the job done, possibly. Registering a deck with 22 different lands for shenanigans? Alrighty then. 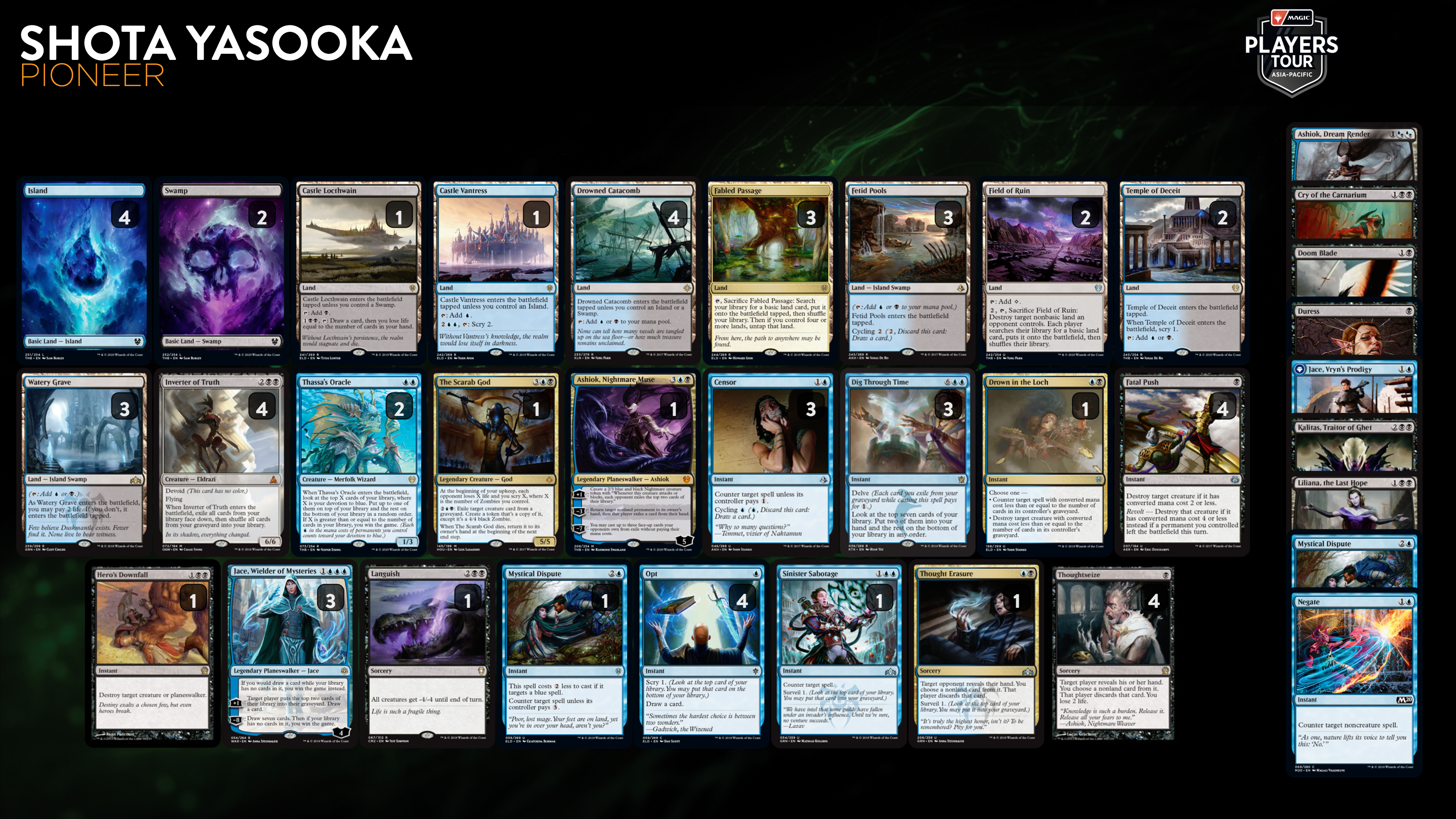 While Inverter has been the big noise for the last week, both Mono-Black Aggro (13%) and Niv to Light (11%) have been front and center for a while. Those are the only three decks in Nagoya to breach the 10% threshold, while 10 unique players or more have also sleeved up White-Blue Control (7%), Blue White Spirits (7%), Izzet Ensoul (7%), Big Red (6%), and Lotus Breach Combo (5%). 2006 World Champion, and Magic Hall of Famer Makihito Mihara is among those playing the Lotus Breach Combo. Frank Karsten did a great job explaining the deck. 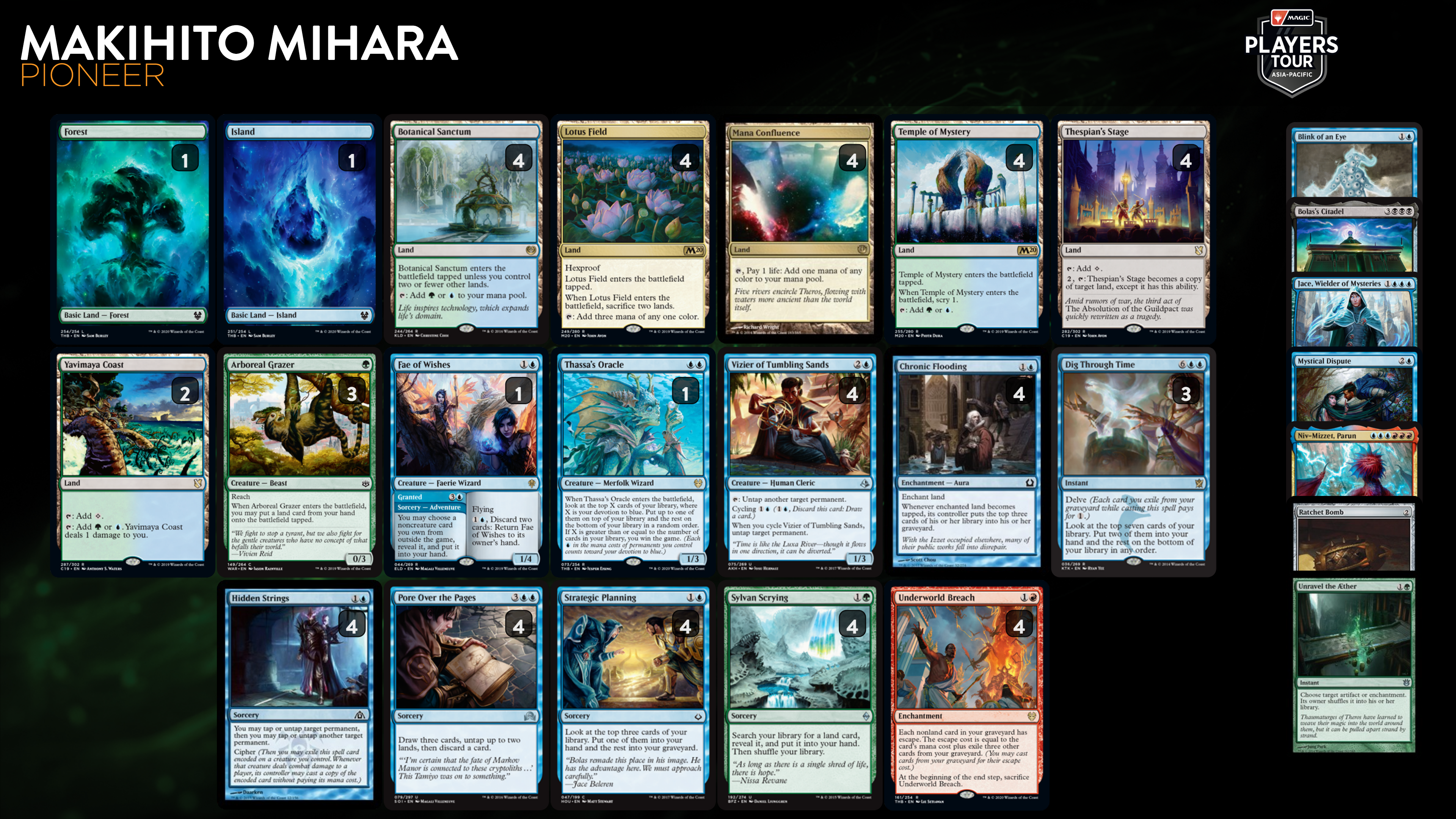 But the important bit is this: The key combo is with . If you control and , then you can repeatedly cast to mill your entire deck. After all, untaps lands to pay for its own mana cost, and the trigger on pays for escape. This combo doesn't even require . After milling your entire deck, the game is won by casting from the graveyard.

It's clearly a deck in progress, but Mihara was well-equipped to find the perfect build.

The depth of Pioneer is easy to spot when you see that 17 players each have an archetype all to themselves. Don't fancy trying out one of the top half dozen decks? Then let me offer you:

I Stand With Ken

So those are the seventeen one-ofs in the field, but the most interesting deck in the room has exactly two players, working together to create, well, quite something. Shota Takao is one of those, Top 8 from Pro Tour Oath of the Gatewatch, and with multiple Grand Prix Top 8s behind him. The other? None other than the mighty Ken Yukuhiro. Yes, the deckbuilder extraordinaire has done it again. Now, we don't yet know whether this deck is actually, you know, good, but if Ken thinks it is, that's generally a good sign. Here's the list: 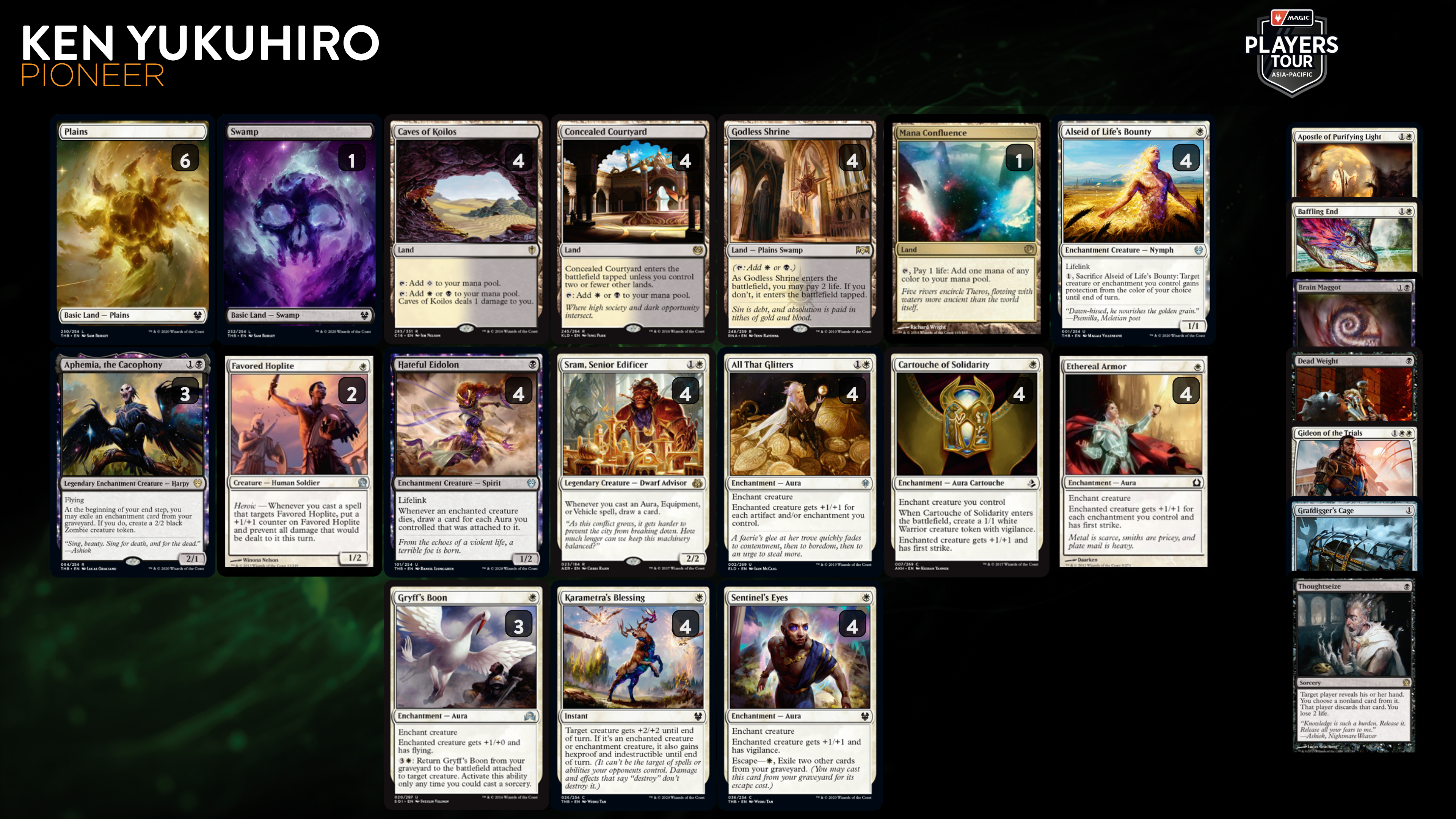 So, first things first: the mana curve tops out at two. Yes indeed. Two mana. Now Sram decks have been seen before—Ken's not inventing the wheel here—but this is a bold call for a big tournament. Here's how a game might play out:

Turn 3—OK. We're set up for good times. After our land for the turn, let's start out with . Heroic triggers on the Hoplite, making it 2/3. Sram draws us a card, and the Boon makes the Hoplite a 3/3 with flying. Next? . Now the Hoplite is 5/5, flying, and has vigilance. And we draw another card from Sram. rounds out a crazy trio of enchantments—more Sram!—leaving our Hoplite as a 9/9 flying, vigilance beatdown machine!

Of course, opponents might not like that, so cards like , and look to keep the beatstick alive. If your enchantment-stacked creature is a , there's a sizeable upside if it dies, keeping the next wave coming. Plus, can turn the graveyard into more damage down the line.

As so often, Ken is giving us plenty to think about before the Constructed rounds even begin! As the tournament progresses, we'll keep our eye on this low-to-the-ground monstrosity, and all the other decks showcasing the awesome Pioneer format.