The 32 Explorer decklists submitted for Magic World Championship XXVIII feature many archetypes that everyone was expecting, such as Abzan Greasefang, Rakdos Sacrifice, Mono-Blue Spirits, Rakdos Midrange, and Azorius Control. Yet others were quite surprising—either because they use innovative combinations of cards or because they were not a major part of the recent competitive metagame previously.

Explorer is comprised of all Pioneer-legal cards on MTG Arena, and it's the format for the six World Championship rounds on Saturday October 29. In this article, I'll take a closer look at the seven spiciest Explorer decks submitted for the event.

Pro Tour champion and longtime commentator Simon Görtzen, who qualified for the World Championship by finishing in the Top 6 at the Innistrad Championship, brought a spicy brew with powerful synergies. Imagine the following start:

The deck also features . The planeswalker shuts down any opposing or activations, and Karn's -2 ability can grab a variety of interactive or game-winning artifacts from the sideboard. For example, stops , while will crush opposing midrange players. is also a sweet one. Even though this is a mono-color deck, Golos can be activated via .

Although I had seen similar-looking Mono-Red Ramp decks before in the similar Pioneer format, Görtzen's embrace of led to a more streamlined Explorer build. His sideboard is cleverly put together as well. could double as a proactive threat against Azorius Control and as a reach blocker against Mono-Blue Spirits, which is exactly the type of wide flexibility you need when most of your sideboard slots are already claimed by Karn.

Drew Baker, who qualified for the World Championship via the Challenger leaderboard, also brought a Karn deck. He and Görtzen are the only players to bring the planeswalker, and this may prove to be a good metagame choice. Abzan Greasefang is the most-played Explorer deck at the World Championship, and preventing activations stops their primary game plan. That said, Baker's deck is widely different from Görtzen's.

Baker's list is more of a midrange deck with cheap interaction and a lot of grinding potential. Nearly every creature has an enters-the-battlefield ability, and the only creature that doesn't——can recast dead ones from the graveyard. Indeed, thanks to , , , and , creatures won't stay dead for long. This means you won't run out of resources and you can overload the removal spells from opposing midrange decks.

The various enters-the-battlefield abilities can also be reused via from the main deck and from the companion zone. These two can even set up a once-per-turn loop where blinks Yorion, then Yorion blinks . Along with various other creatures for value, of course.

Although similar-looking Boros Mirange or Azorius Mirange decks lists have seen fringe play in Pioneer recently, Baker's card choices in Explorer and his preference for Orzhov are relatively novel. I like his inclusion of to prevent graveyard shenanigans from Abzan Greasefang, and the black splash looks worthwhile. In particular, synergizes nicely with or Yorion. After all, to enable revolt, no deaths are necessary—leaving the battlefield temporarily suffices.

The team of Simon Nielsen, Matti Kuisma, Karl Sarap, and Julian Wellman all brought Temur , an under-the-radar archetype. Their lists are nearly identical, with only minor disagreements regarding the exact numbers of , , , and in the main deck. Players with an additional in the main deck then got room for an additional in the sideboard. But in essence, it's all the same deck.

The game plan can be described via a simple five-step process:


Theoretically, step 3 could go wrong if you drew all three copies of , but that happens only about 0.2% of the time by turn four. Even then, allows you to put one on the bottom. also helps buy time to draw your key combo pieces, and other interactive spells like fill a similar role.

The sideboard has some spice as well. For example, if won't always cut it—say against Mono-Blue Spirits with —then can come in to save the day. is also a great find, as it serves the triple role of protecting you from , guarding your from removal, and putting a token onto the battlefield for .

decks are not a complete novelty, and I remember playing against them quite a bit when the Explorer format was brand new. However, they haven't been a big part of the competitive metagame in recent months, and this specific Yorion-infused Temur build is unique. I'm sure that most World Championship competitors were not expecting a large team to show up with it.

Hisamichi Yoshigoe, who qualified for the World Championship by finishing in the Top 6 at the New Capenna Championship, also plans for a turn-four , yet his weapon of choice is .

Compared to , the downside to using is that it's more demanding on the mana base. In addition, you can't include in your deck because that would get in the way of a certain hit.

The upside is that you can cast it for values of X larger than 1, thereby putting multiple Titans onto the battlefield in one go. To enable this, you need cards that create multiple tokens. ; ; and are perfect for that purpose.

Yoshigoe's deck splashes black for and a large number of spot removal spells, so it can play similar to a midrange deck with a combo finish. After buying time with these black spells, a turn-five will often be good enough. Apart from , Yoshigoe can also accomplish this by ramping to seven mana with or by reanimating a discarded Titan with .

While decks sometimes do well in Pioneer tournaments, they usually come in the form of an Izzet Creativity deck featuring either and (neither of which is available in Explorer) or . By comparison, Yoshigoe's build is innovative.

Yimin Zhi, who qualified for the World Championship via his Top 6 at the New Capenna Championship, brought an deck that looks excellent against Rakdos Midrange and decent against the field as a whole. The dream with this deck is to cast on turn two or turn three, follow up with on turn four, and fetch at the end of that turn.

While seeing at the World Championship is not a major surprise, but Zhi's innovative build is.

I have faced Selesnya Angels a few times before in Explorer, so Miyano's deck is arguably the least “spicy” deck in this article. Still, as the only tribal player in the field, he deserves some recognition.

The game plan of Selesnya Angels is to use various life gain creatures to enable and to create additional board presence via . and are payoffs for focusing on the Angel tribe, and ties it all together.

even makes it possible for to create two Angel tokens per turn cycle. Since it triggers at the beginning of each end step, you could gain 5 life with and in your turn and then do the same by casting in your opponent's beginning, main, or combat phase.

Hall of Famer Shota Yasooka, who qualified for the World Championship via the League leaderboard, is one of the most renowned players and deck builders of all time. When I was playing Pro Tours, the first question on many players' minds as decklists were unveiled was: "What is Shota playing?” So when he effectively tells everyone that the stock build of the most-played archetype in Explorer is all wrong and that it doesn't even get the colors right, then we ought to pay attention.

Yasooka's tweak to Rakdos Midrange is to splash green for . He runs the vehicle instead of or other four-drops that would die easily to a spot removal spell without leaving any value behind. By contrast, if dies to , then at least two Cats will linger around. also enables fun interactions available involving . For example, if the Goblin Shaman makes a token copy of , then could create a copy of that token as well.

Yasooka's sideboard has additional green cards in and , which provide more options in various matchups. For example, the instant can exile , and the sweeper can destroy multiple Spirits.

The green splash comes at the cost of a slightly more painful mana base with slightly fewer untapped black sources for a turn-one , but there are enough black and red sources to consistently cast all other spells, and 11 green sources is sufficient. There's also some loss in utility from ; ; and . However, the power of the Chariot may make up for the slightly weaker mana base. Perhaps all Rakdos Midrange decks were built wrong and we should have been splashing for all along? 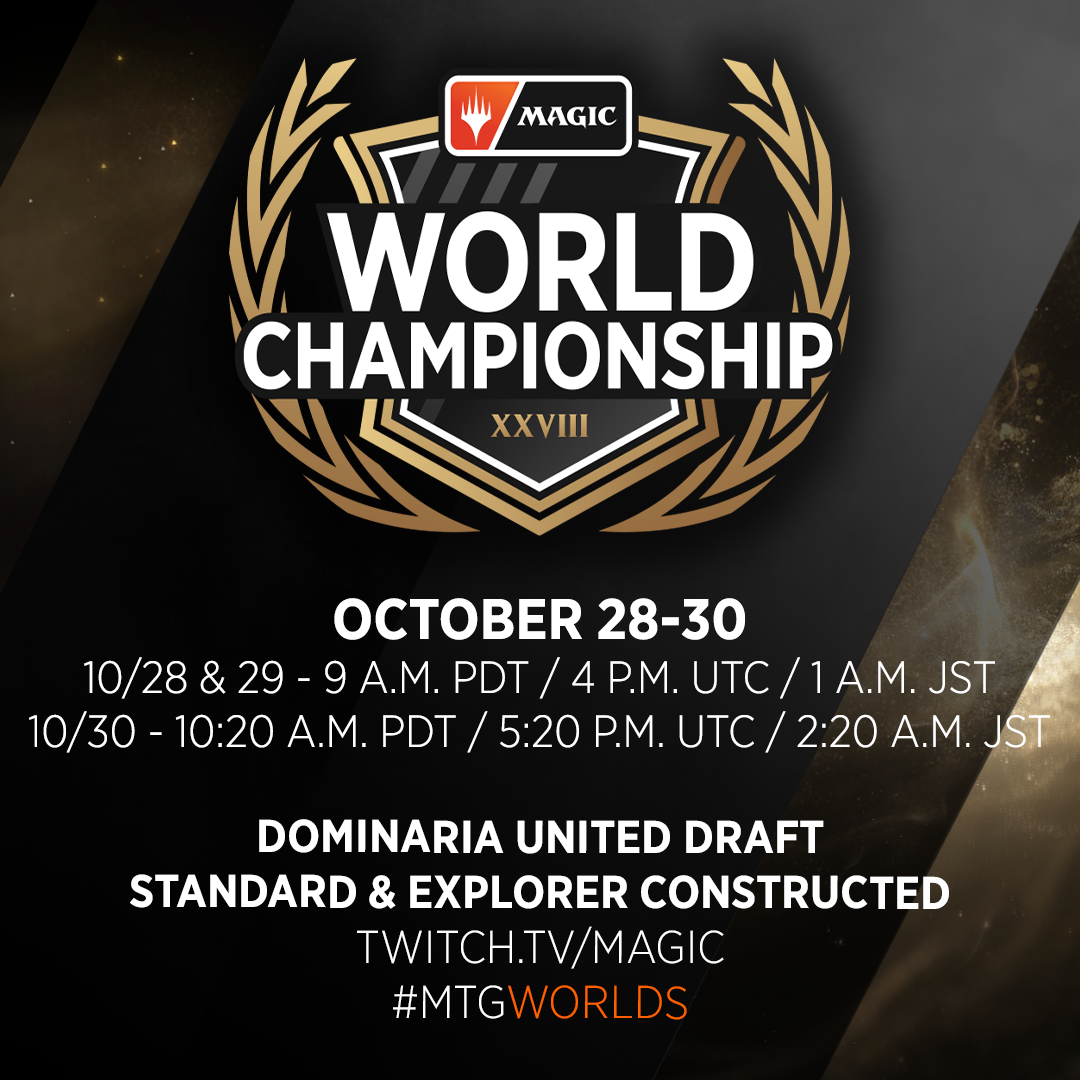 Magic World Championship XXVIII takes place October 28–30 and features Dominaria United Draft, Standard, and Explorer. The Explorer rounds are all played on Saturday October 29, and you can watch the impressive field duel it out beginning at 9 a.m. PT (6 p.m. CEST // 1 a.m. JST 10/29) live on twitch.tv/magic!