And if you want more crunchy details to snack on—such as just who's casting the show, exactly where everyone is, and how the piles of prize money and Mythic Points break down—the Mythic Championship VI Survival Guide has even more for you.

When it comes to Throne of Eldraine Draft, everyone seems well aligned: It’s one of the best formats ever, and that’s quite the accolade. Now we’re in an interesting spot where everyone has drafted a ton, knows all the options, the tips and the tricks, and has their favorite archetypes lined up. So is there room for innovation? Tune in for all the morning action to find out.

As for Standard, it’s no secret that the early retirement of Field of the Dead has led to Oko, Thief of Crowns taking the, well, crown as it were. This gives us a similar conundrum to Limited: Is there room for innovation? For that, it’s the ten afternoon rounds that will shape up the new Standard.

The Path to the World Championship – MPL

The Top 4 at the end of the season get seats at the World Championship. Javier Dominguez, Jean-Emmanuel Depraz, and Autumn Burchett are already locked. Here’s the entire MPL leaderboard: 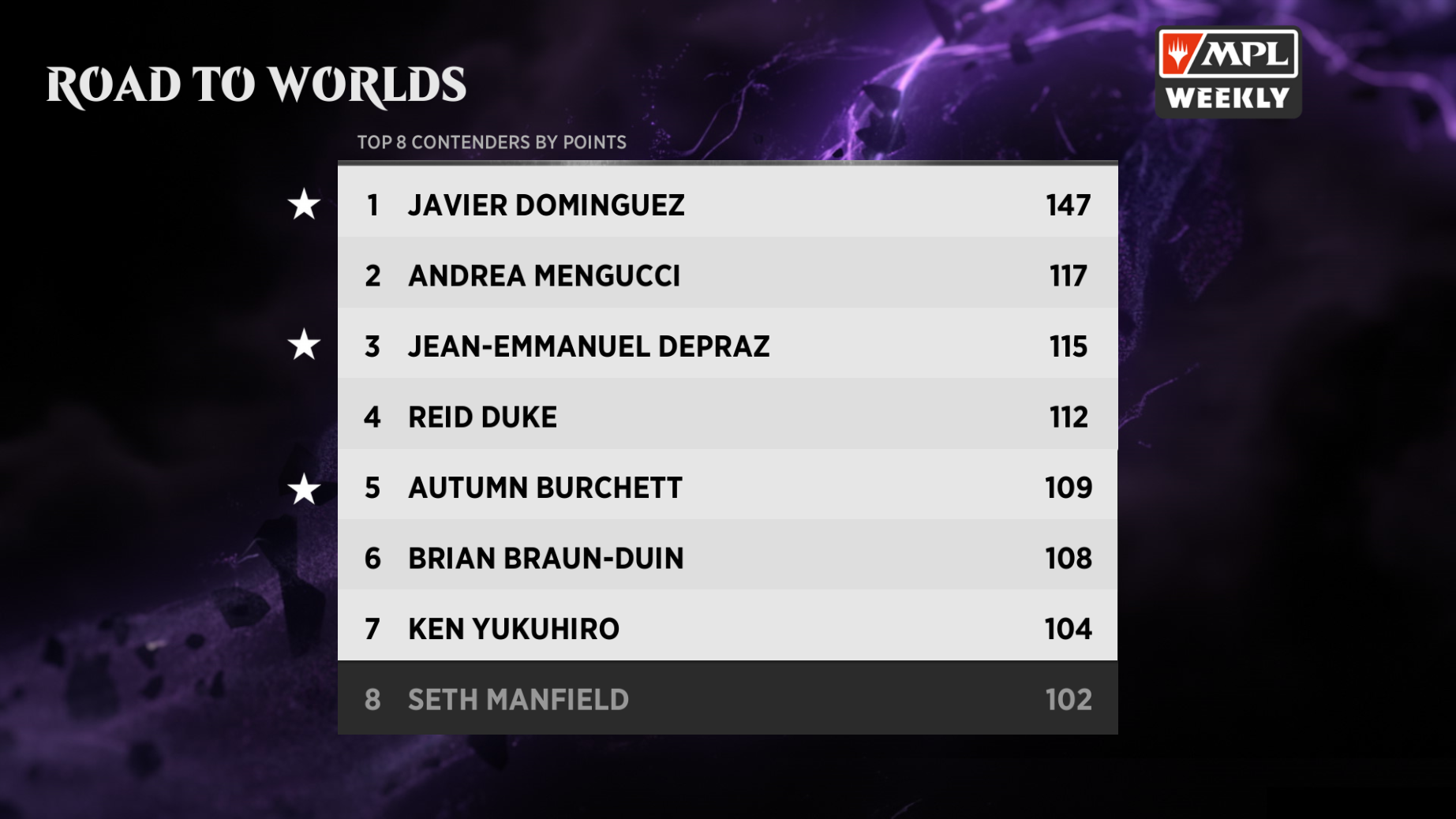 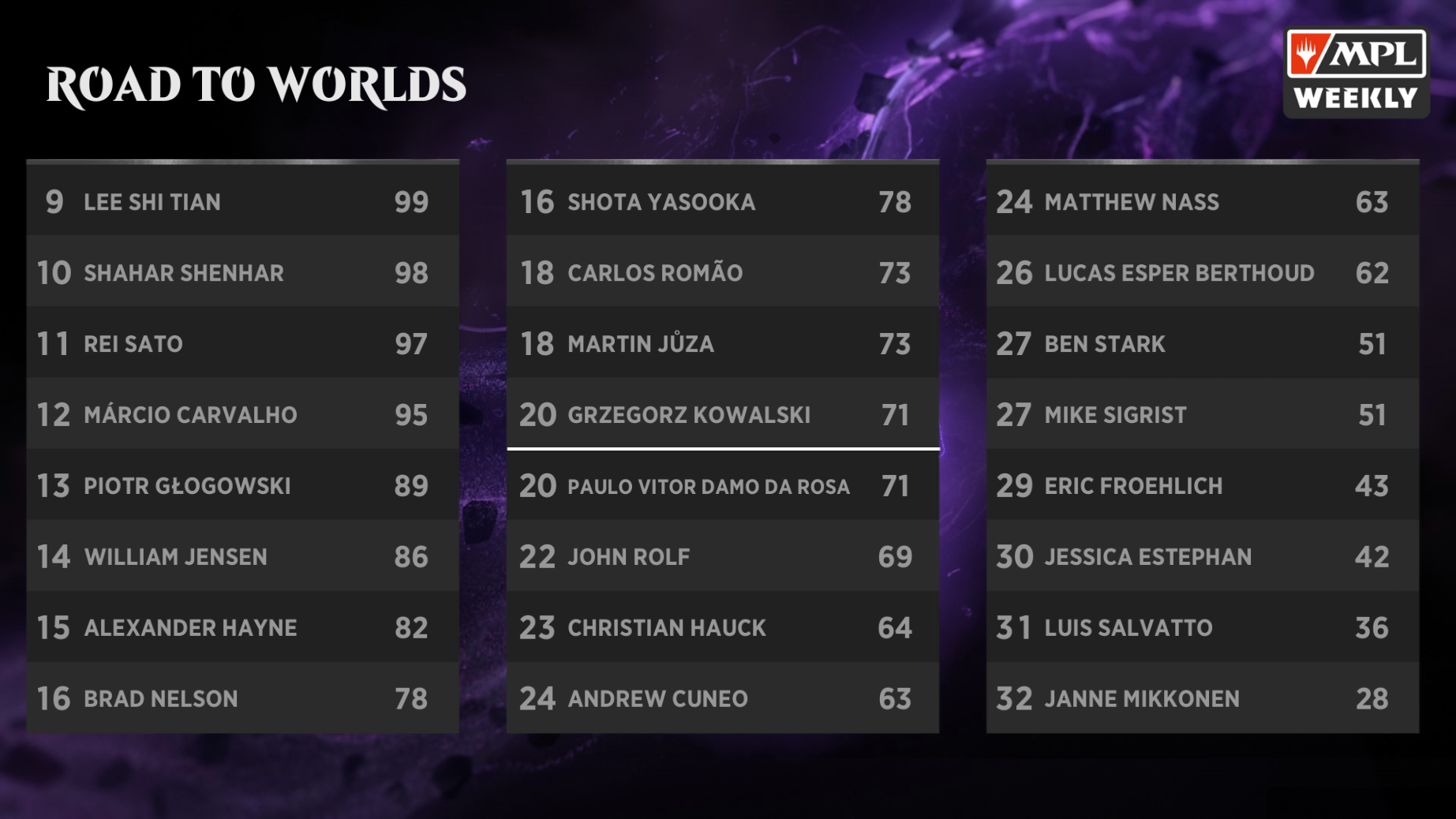 If you missed MPL Weekly over the weekend, you missed getting ahead of just where the World Championship race stands. Everyone in the MPL has two shots left in the chamber—since the whole MPL will be at Mythic Championship VII next month—but not all chances are equal. Being within 20 Mythic Points of a seat is where one reasonably wants to be to have a chance, and given that 50 Mythic Points go to the winner of Mythic Championship VI they’re all well within range. However, it’s only once you reach of 12-4 (which could be a virtual tie for the Top 8) that you start accumulating 20 or more points.

Even so, with two big weekends to go in the season, I’d be surprised if more than two of these top ten contenders make it to the World Championship showdown, and that means a lot of disappointment for a lot of amazing players.

The Path to the World Championship – Challengers

The top four Challengers (that is, non-MPL players) also make it to the World Championship. Matias Leveratto, Eli Loveman, and Thoralf Severin are already there, as Mythic Championship champions. Without them, here’s how that leaderboard is shaping up:

There’s one crucial difference between the MPL and the Challengers: Not all the Challengers are going to be at Mythic Championship VII. Of the top five in the standings, Raphaël Lévy, Luis Scott-Vargas, and Matthew Sperling are all going to be on the sidelines during that critical weekend. That makes whatever run they can put together in Richmond utterly critical, as it will leave them—to borrow golfing parlance—"in the clubhouse."

First, there’s Chris Kvartek—someone you should know. After excellent runs at Mythic Championships throughout the year, his chances of qualifying for the 2019 Magic World Championship went through the roof when he got himself back to Long Beach after losing that chance in the final round of Day Two at Mythic Championship V. He’s been one of the real finds of this season, and now he has a great chance of getting to the biggest tournament of them all.

Next is Antonino De Rosa. To some of you, that will be a new name. For others, it’s a welcome return to a player who has been at or near the top of the game whenever he’s had the time to turn his laser focus onto Magic. A former US National Champion, he has Grand Prix titles, Mythic Championship Top 8s, and is a fearsome competitor. He will also be in action this weekend, giving him two chances of spiking a massive tournament and getting into the World Championship mix.

We like to celebrate success, so it’s an odd feeling to be talking about players "in trouble." But, as the MPL season winds down, the players outside the Top 20 are in serious need of Mythic Points if they want to return to the MPL next season. The MPL is full of good players, but just how good is indicated by the fact that no fewer than four Hall of Famer members—Shota Yasooka, Paulo Vitor Damo da Rosa, Ben Stark, and Eric Froehlich—are all in the danger zone. Yes, they have two more tournaments to get things right, but so does everyone else in the MPL. Mythic Championship VII next month is going to be very, very bad news for some of the biggest names in the game, which makes a standout performance at Mythic Championship VI all the more important.

One player who’s already winning this weekend is Reid Duke, as he’s being welcomed into the Magic Hall of Fame. Brian David-Marshall will be on hand for the annual Hall of Fame dinner, and past experience suggests that there’ll be plenty of Hall of Famer members coming to Richmond to pay their respects to Duke—and take their place in the starting field Friday morning.

As usual, we’ll be bringing you all the action as it happens. Like many events, top players are congregating in "testing houses" ahead of the event. We spoke with Duke ahead of his Hall of Fame induction, and it turns out that he has quite the collection of housemates. Want to know why the World Championship is such a big deal? We know that 2013 and 2014 winner Shahar Shenhar, 2015 winner Seth Manfield, 2016 winner Brian Braun-Duin, 2017 winner William Jensen, and 2018 winner Javier Dominguez are all collaborating. And yes, they’re all in the same testing house as Duke together with many more great players. It might be one of the most talented and successful groups ever assembled, and we’ll be bringing you exclusive content from them.