2019 has been a big year for Magic esports. We created a new level of play and professional support with the Magic Pro League. We doubled the prize pool for Magic, making it one of the biggest in gaming. We added all-new ways to play and watch the best strategy game on the planet with the introduction of Magic: The Gathering Arena. And the results have been terrific. More people are playing Magic than ever and viewership of Magic on channels like Twitch and YouTube has more than doubled in the last twelve months. Magic fans have never had as many opportunities to play, qualify, and watch Magic as they have had in 2019.

But we see room for improvement. Magic is growing on both tabletop and MTG Arena, and we need a competitive structure that can grow with it. We hear loud and clear that our tabletop fans want more information about tabletop's future and how to qualify for Magic's highest levels of competitive play. More players, from more regions and backgrounds, should have an opportunity to play on Magic's biggest stages—regardless of who you are or where you come from. We want new fans and would-be pros to have stars they can follow, cheer for, and aspire to emulate. We think partners can be a bigger part of our competitive mix and help us bring in new players. And we see the Magic Pro League as still in its early stages of development with a lot more opportunities to showcase the highest level of play and featuring a broader cross section of players.

Our goal for competitive Magic has always been to grow both the game and its amazing global community, and the changes we have planned for the 2020–2021 season are no exception. We have a lot to announce today, all of which has been in the works for months and is based on feedback from players, pros, and partners.

Here are the headlines of what's coming: 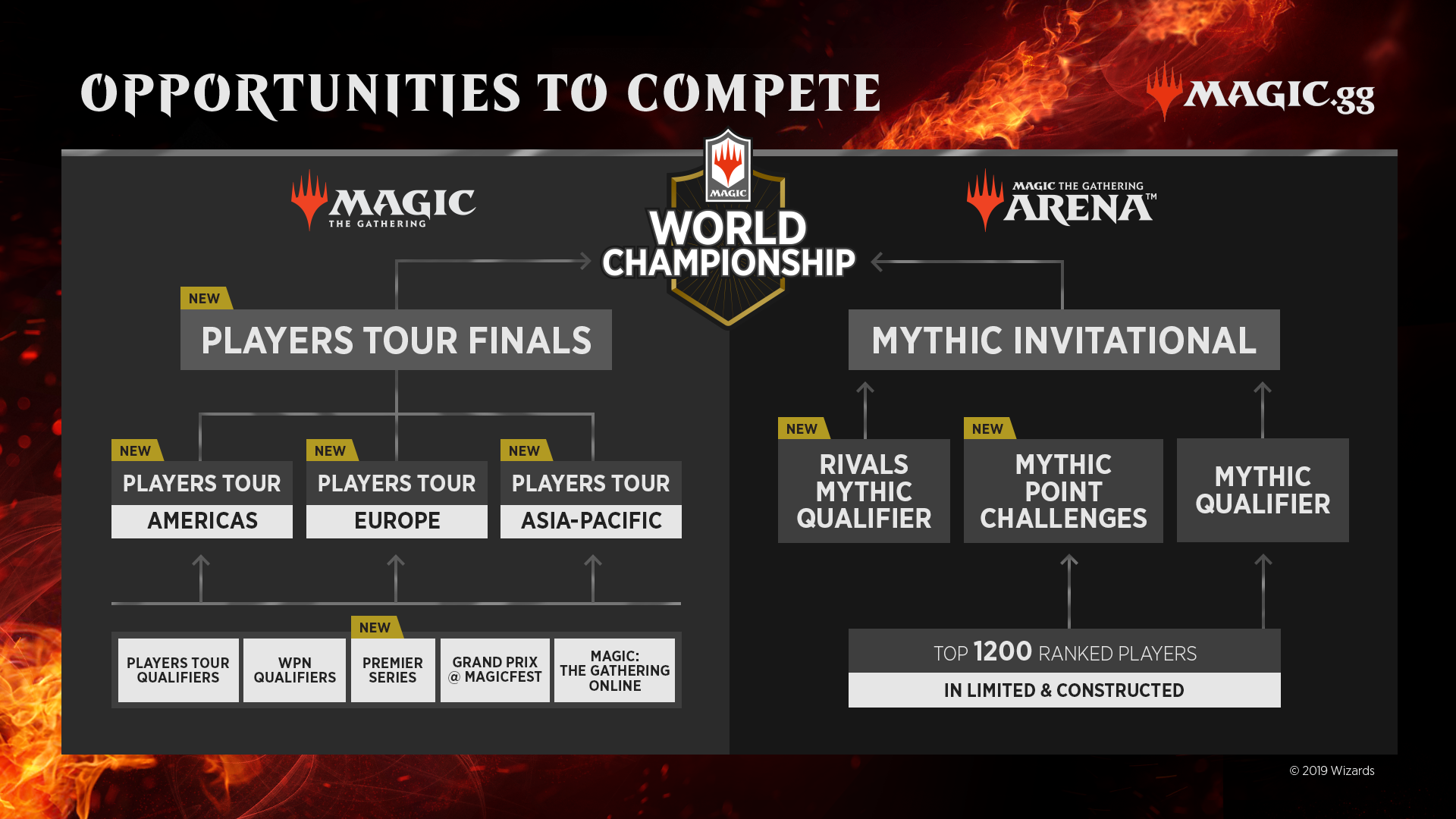 We're excited about Magic's competitive future, with more opportunities for more players to reach the highest levels of competition in both tabletop Magic and MTG Arena, and creating awesome viewing experiences for fans to watch the best minds in Magic battle for glory.


To make it easier to follow we've broken the news down into sections:

One last important note before we dive in: this is a structural announcement. That means we'll be talking about qualification paths, ways to advance, and what awaits you when you do advance. Additional details like formats, dates, coverage, and more specifics will be available for individual events later.

For 2020 we're further defining how you get to be in the Magic Pro League (MPL) and creating the Rivals League as a stepping stone to the top.

The Rivals League is a talent-development league that will feed the MPL. Rivals will make it into the MPL either through sustained success over the course of a season or through an exciting new tournament called the MPL Gauntlet.

The Rivals League will consist of 46 players as follows: 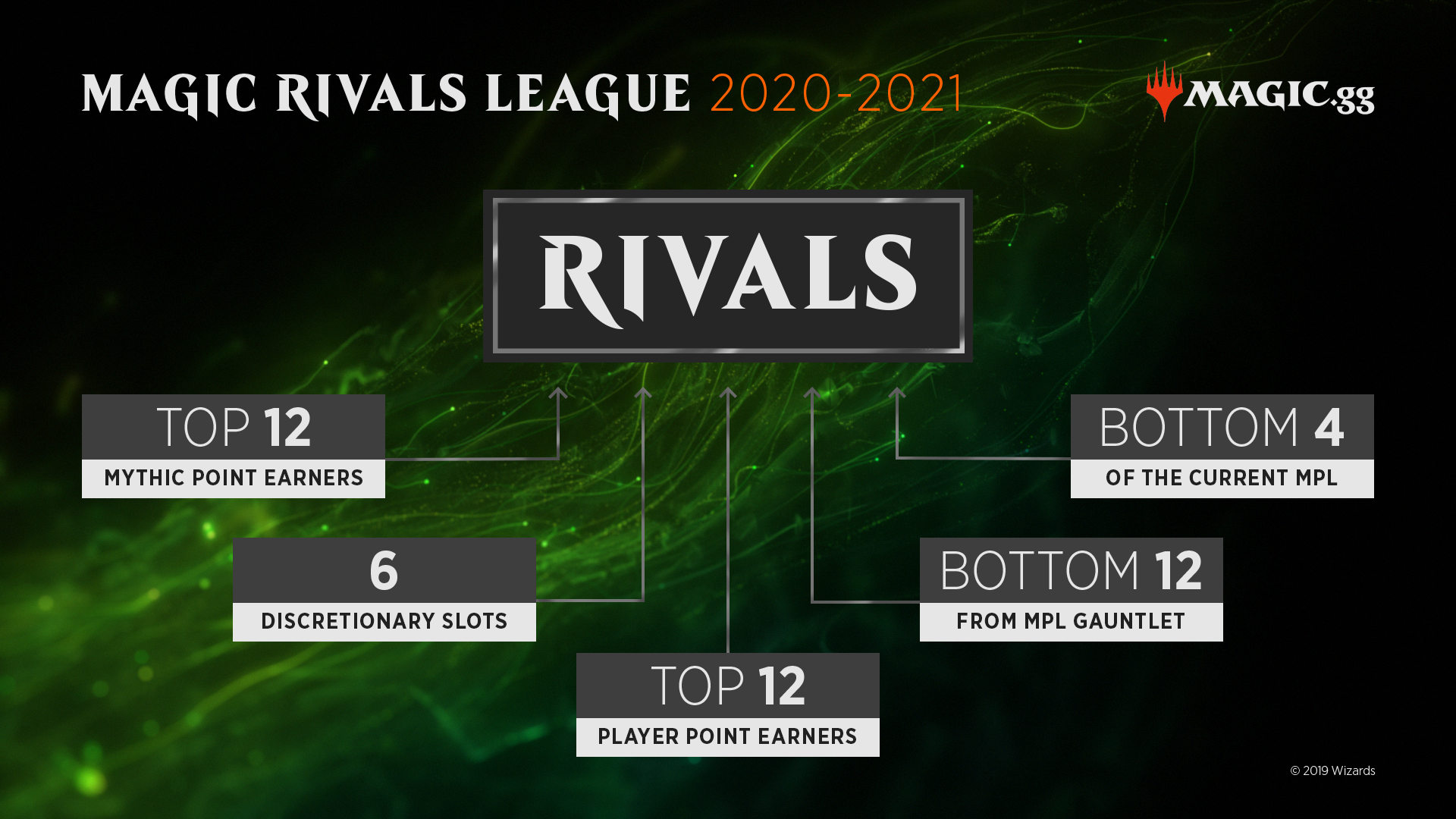 Throughout the season, Rivals will receive invites to events, including Players Tour events and their own Rivals Mythic Qualifier and can earn up to $20,000 in appearance fees in addition to prizes earned at tournaments.

At the same time the MPL will become a 24-player league with players able to earn up to $50,000 in appearance fees in addition to prizes earned at tournaments. MPL players will also be invited to Mythic Invitationals and all Tabletop Players Tour events. 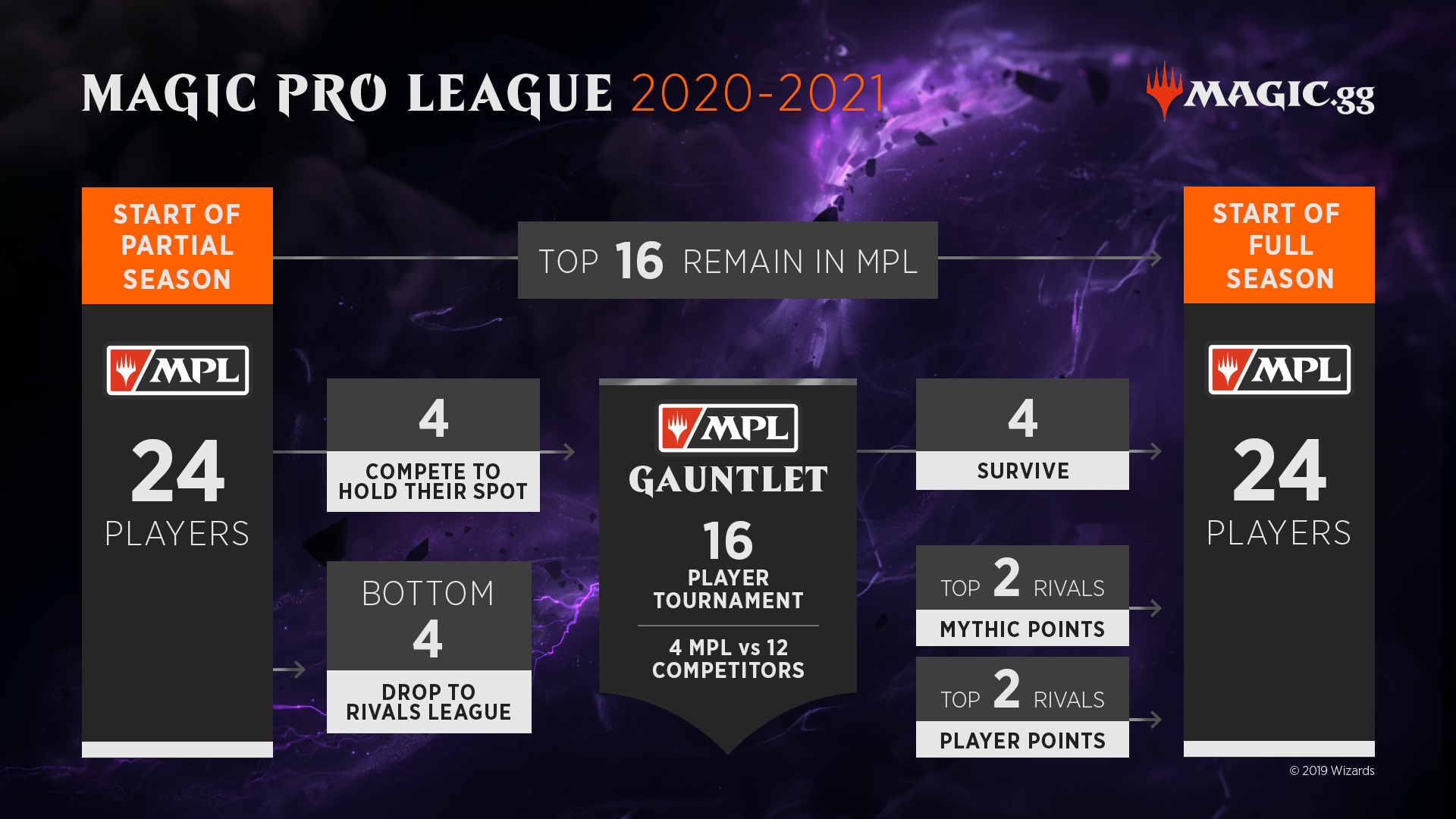 Here's how the MPL Gauntlet will work: 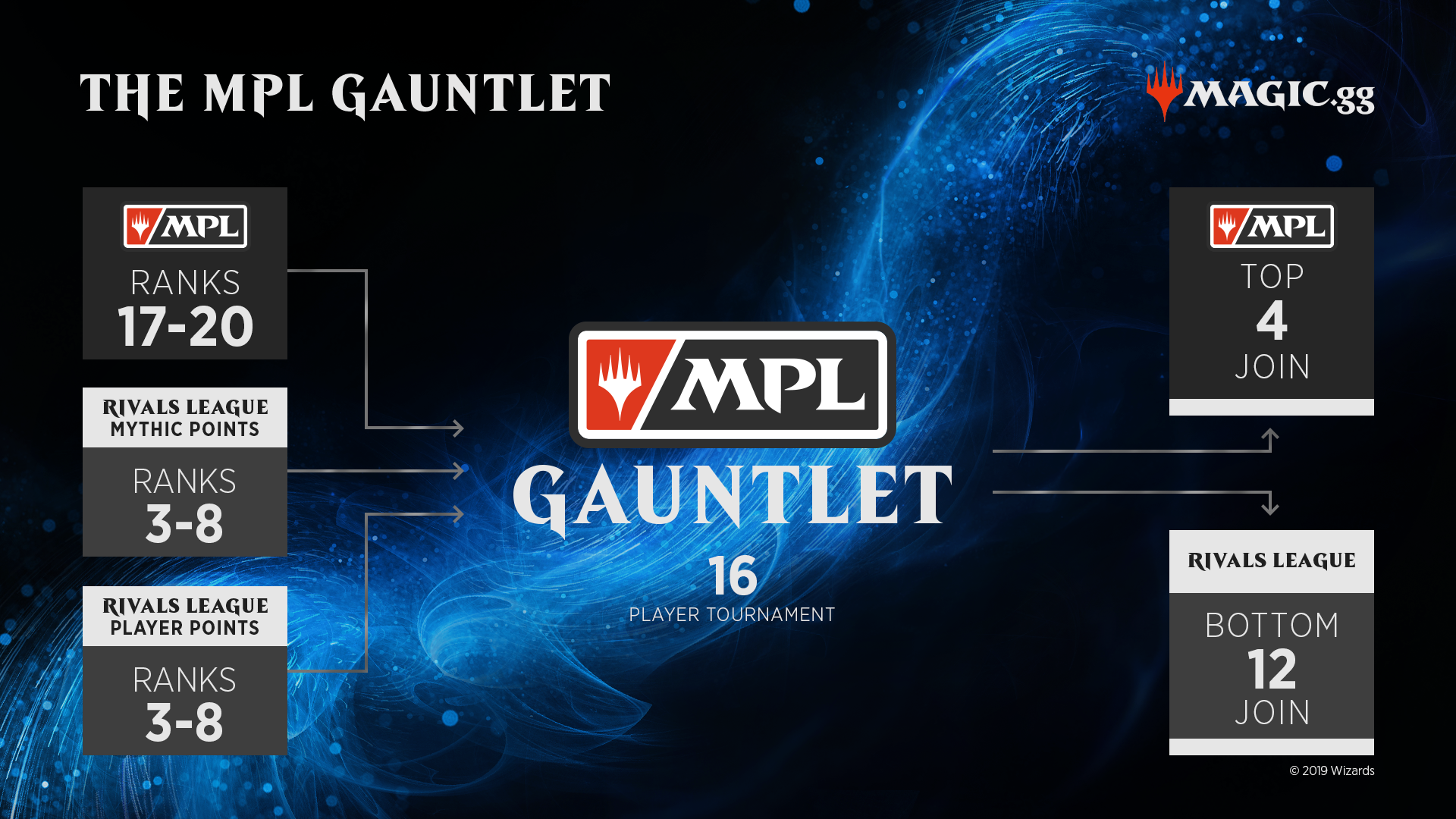 Once the MPL Gauntlet tournament has taken place, the Rivals League will consist of:

After the MPL Gauntlet, the MPL will consist of:

We will have separate tracks for player ranking points for MTG Arena play and tabletop play, with the MPL tracking rankings combining the two.

There's more detail on these in the section on MTG Arena events, but these are the only ways to earn Mythic Points.

For tabletop play, we'll be tracking Player Points. You can earn Player Points at Championship-level events. Those include:

Details of the Players Tour are in the next section.

Finally, MPL rankings will be determined by a combination of Mythic Points, Player Points, and points earned from MPL split play. The top-ranked MPL players will be the players who do the best across all our top-level play opportunities.

The Players Tour is Magic's new tabletop competitive structure, focused on creating more opportunities for more players around the world through a regionalized tournament system.

There will be three regional Players Tours:

The Tabletop Path to the Top

If after this you fall just short of reaching Rivals level, you don't have to start at the bottom again:

While winning a qualifying tournament is the most direct route to the Players Tour, it is not the only one. You can qualify in the following ways:

Prizes and the number of invites for the Players Tour events will vary by region.

Note the addition of a direct qualification for the winner of Grand Prix. These players will qualify for both the Players Tour and the Players Tour Finals. Players who are qualified for both may play in both events.

These events will invite approximately 120 players and will each have a $250,000 prize pool.

There are many different ways to qualify for the Players Tour.

These are single-day tournaments where the winner will qualify for the Players Tour, similar to the current Mythic Championship Qualifiers. These events will also have a promo card attached, which you'll receive just for registering. The first one in 2020 will be: 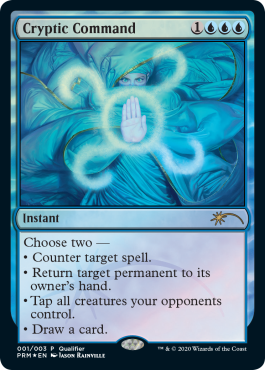 WPN stores will have the ability to run their own qualifying tournaments. There will be multiple structures available to them, including a multi-day structure with feeder events that we expect to be popular. Each WPN event will be provided 32 promo cards to be distributed as prizes.

We expect the first round of these events to begin in October. Events will be listed in the Event Locator as they are scheduled, so check there to find events near you.

We are partnering with a number of prominent tournament organizers on tournament series that will be integrated into the Players Tour and will offer invites to the Championship level. These include, for example, events like the SCG Tour by Star City Games and the newly created Latam Magic Series from Bazar de Bagdá. We expect to continue to expand partner events in 2020 and beyond to create exciting new opportunities for high-level play that provide paths to the Rivals League and the MPL.

Grand Prix will continue to be the keystone tournament at MagicFests run by CFB Events and the Top 8 will receive invitations to the Players Tour, but in addition the winner will also receive an invite to the Players Tour Finals. This gives an added benefit to winning at a Grand Prix.

Note that Grand Prix will award Lifetime Player Points, but they will not apply to seasonal qualifications. Lifetime total Player Points will use Pro Points as a starting basis.

Magic Online will continue to run qualifiers in a variety of formats, including Limited, Standard, Modern, Legacy, and Pauper. You can find the MTGO schedule by visiting the MTGO calendar.

There will be three Mythic Invitationals in a regular season, each with a $750,000 prize purse. These events will be showcases for high-level play and will offer great spectacle for viewers—if you watched either the Mythic Invitational or Mythic Championship III this year, you'll have an idea of what these events are like.

Players invited to these Invitationals will be drawn from within:

Each Mythic Invitational will be fed by two Mythic Qualifier tournaments with the top 1,200 ranked players in monthly MTG Arena play in Constructed or Limited at the end of each qualifying month eligible to compete.

The Top 16 in each tournament will be invited to the corresponding Mythic Invitational, and players who make Day Two will earn Mythic Points, whether they reach the Top 16 or not.

Finally, Mythic Point Challenge tournaments will not feed other events, but will award Mythic Points. Qualifying for these events will require the same ranking (1,200 or better) as Mythic Qualifiers.

Next year will be a transition as we work towards a shift to a mid-year to mid-year competitive season for 2020–2021, starting August 2020.

Until that point, we will run a partial competitive season from January 1, 2020 to July 31, 2020. The partial season will utilize the full overall competitive structure but will hold fewer events and have qualification levels as needed to ensure a transition to the new system.

After the conclusion of the 2019 Season, we'll form the 2020 partial season's MPL and Rivals League as follows:

During this partial season, the Rivals League will have 32 players, expanding to 46 during the full 2020–2021 season. 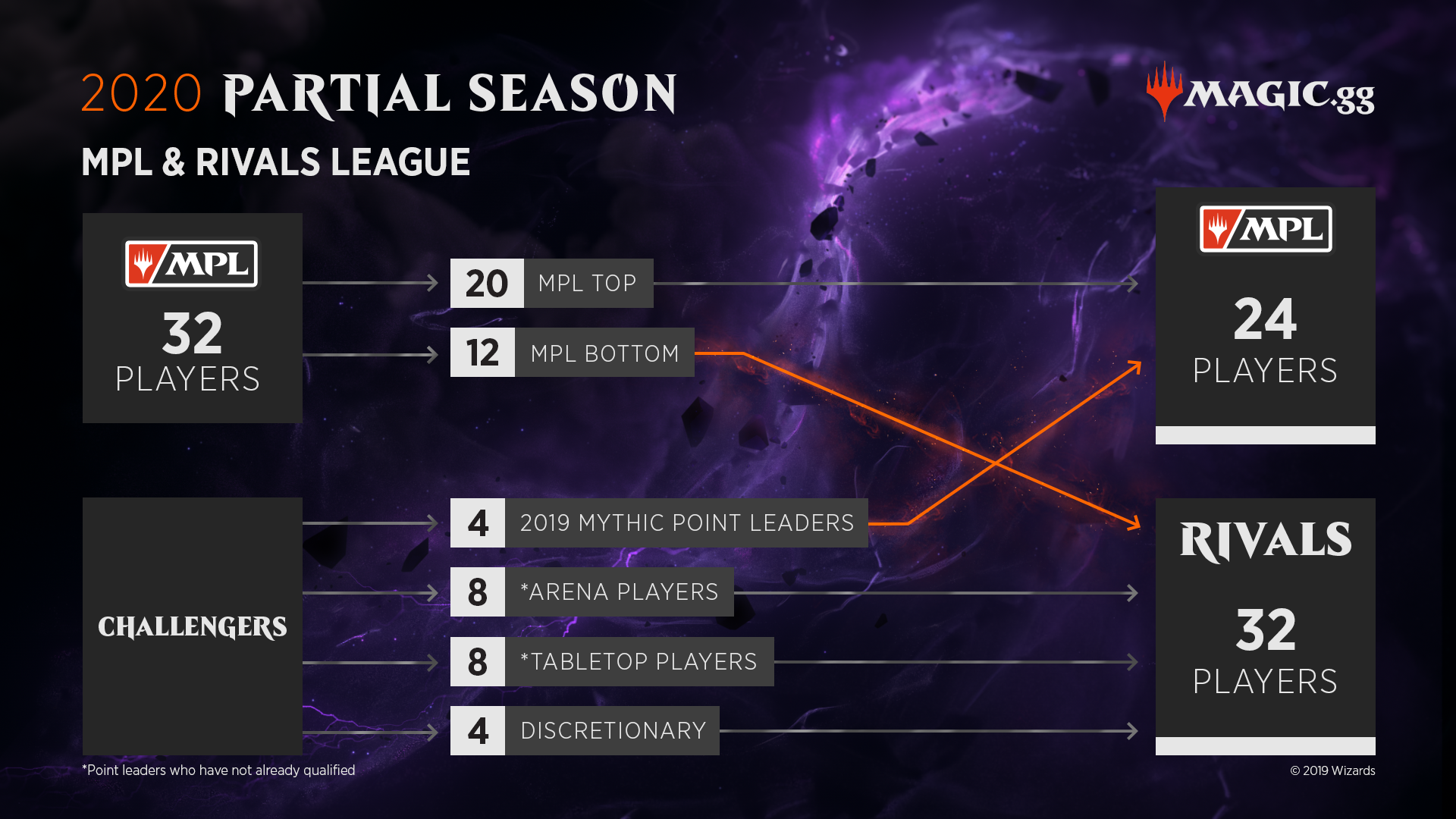 The 2019 Season will conclude with the World Championship held February 2020. This is a change from the previously announced month of December. More details on that event will be released soon, but you can see who has already qualified and what slots are yet to be filled here.

The 2020–2021 season World Championship with a prize pool of $1 million will feature the winners of each Players Tour Finals and the winner of each Mythic Invitational and will take place near the end of the season in 2021. Additional slots will be announced prior to the start of the 2020–21 season.

Whilst we've naturally focused on our future plans, there's obviously still a lot more to watch in the 2019 season:

How do I get started?

With more opportunities to qualify for the biggest tournaments of the year and stake your claim as one of the top players in the world, there's never been a better time to get into competitive Magic.

We'll share details of formats, dates and specifics for individual events early enough that you'll know what you need to do to qualify before you can start down the qualification path for any given event. Be sure to follow @MagicEsports for updates and bookmark Magic.gg for Grand Prix and Premier Series events. 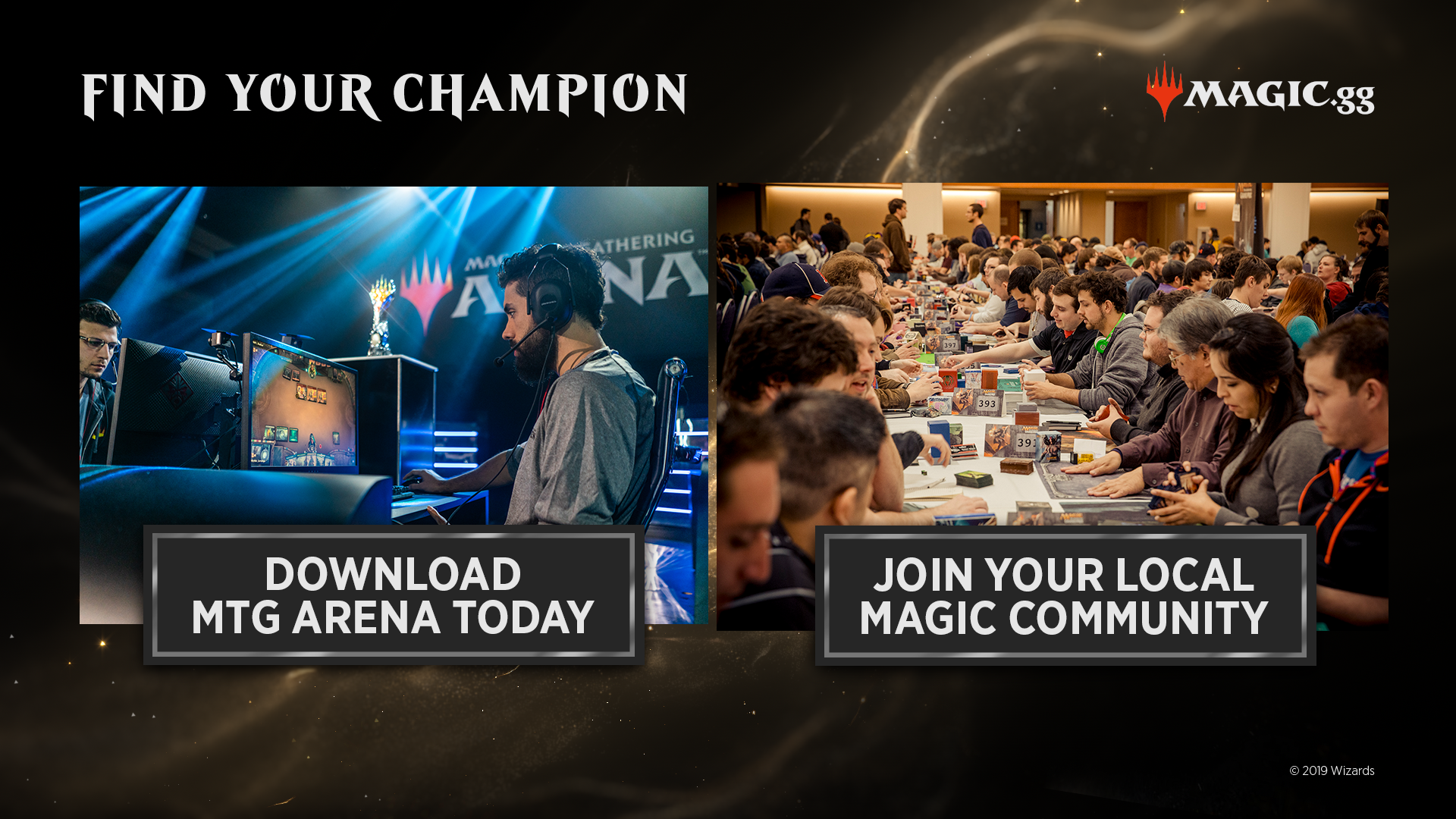