"I was ten years old, and some friends of mine were playing, and normally we would be playing football outside on the playground, but they just wanted to play this card game instead," Kassis said. "I was kind of disappointed at first, but I didn't want to just be bored playing by myself. So I sat down and learned the game with them.

"Here we are thirty years later."

In the years between those first playground games and now, Kassis built a Magic career familiar to anyone who frequented the Grand Prix circuit or followed all the coverage. It's a story that's familiar both because Kassis was a staple of Grand Prix events, with eight Top 8 finishes, two wins, and numerous deck techs covering his trademark midrange value decks, and because it parallels so many similar experiences. Competitive Magic players' stories are ones of both wins and losses, of getting a little better event after event, and persisting until finally breaking through.

While Kassis's win at the Neon Dynasty Championship was another thrilling exclamation point, a marquee event in any Magic journey, it was also the culmination of his steady ascension to the top of competitive play. A great 2018–2019 season, including two Grand Prix wins and a Mythic Championship Top 8 in Richmond, sent him to the inaugural Magic Rivals League. 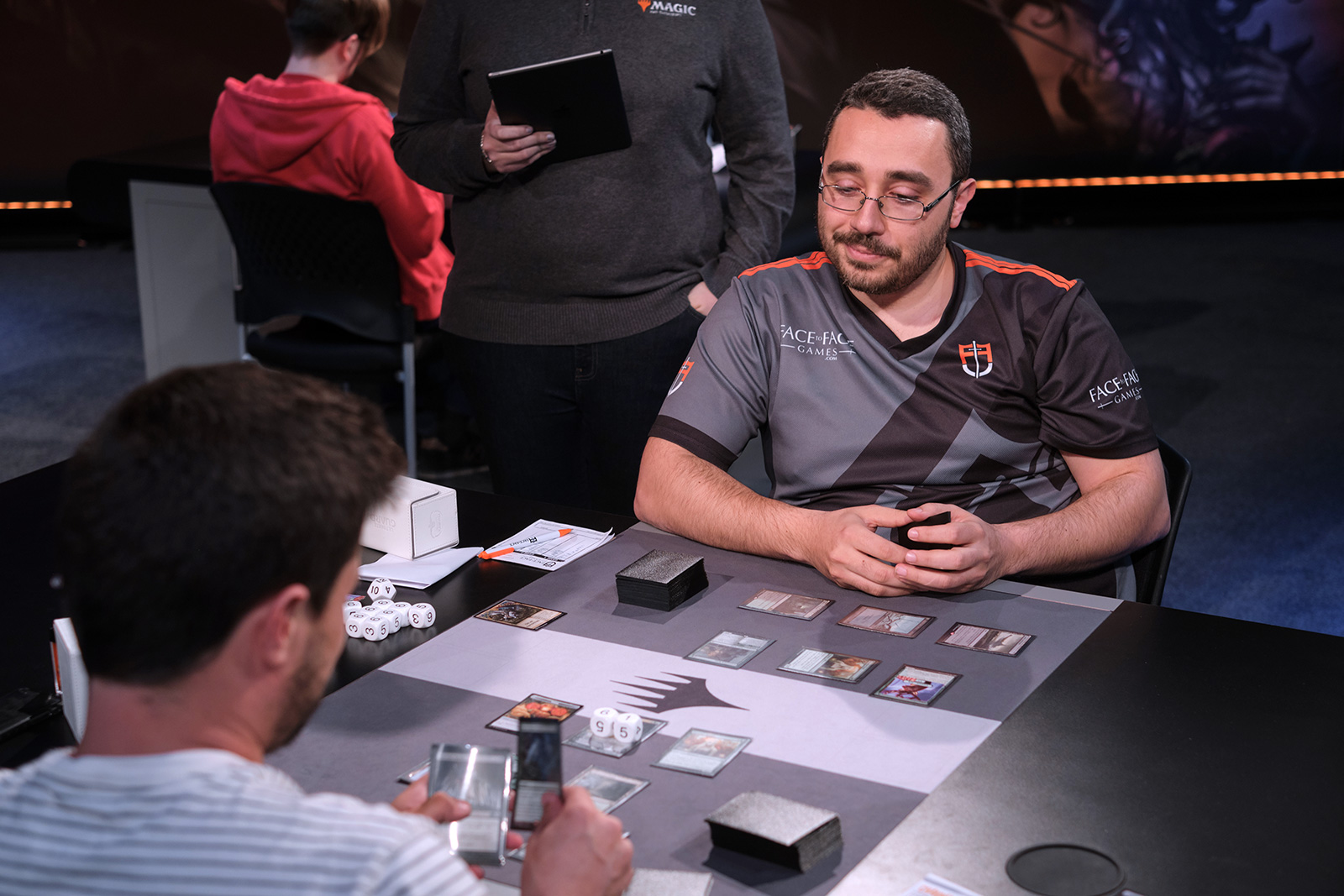 The following season, he finished first in the league, which earned him a spot in the Magic Pro League and Magic World Championship XXVII. It was a journey that started the same year Kassis first played Magic.

"I was playing a local tournament—this was probably the later part of 1993—and I remember winning a couple matches and just having a ball playing. Then a bunch of the guys there, especially the store owner Shawn, decided to get a caravan going to a tournament in Syracuse. I remember it being so much fun and I got a near miss," shared Kassis. "I think I made Top 4 at that event and it gave me this drive to be like, 'Man, I really want to clinch first, I know I can do this.' I just had to come back at it again and again until I finally got there. It probably took me my first year of playing before I even won something that was like an FNM, because we didn't actually have FNM back then."

A few years later, that drive propelled Kassis to his first PTQ.

"I drafted a ton back then because, as a kid, you don't really have a job and I wasn't even taking school that seriously at the time. So my friends and I poured all of our energy and our time into drafting."

That PTQ led to his first Pro Tour, Pro Tour Los Angeles in 1996, where he placed 52nd—cashing his first premier event.

"I'm thirteen, what do I know?" Kassis laughed. "I just got $500 and a trip to California out of it and it was just, I don't know, such a great time and experience that I knew I needed to have more of that."

The next two decades were full of "more of that" as Kassis became a staple of the Grand Prix and StarCity Games circuits. He's long been a fan of midrange decks packed with decisions, and he doesn't shy away from grindy matchups. Decks like Orzhov Ventures, the Alchemy deck that he piloted through the Neon Dynasty Championship Top 8, play to what Kassis sees as one of his strengths as a player.

"I calculate things really fast, and I think that's really served me well, to be able to play at a good pace and also figure out things that have a lot of complexity that some players might not have the time to actually think through."

It's easy to see that strength at work in his success with decks like Bant Knightfall in Modern, which he piloted to his first Grand Prix Top 8 in 2016.

And it ended up being just the right skill for the midrange-heavy field at the Neon Dynasty Championship, and particularly in the Top 8.

Kassis is on Team ChannelFireball, a superteam of rising stars and Hall of Famers that shaped his testing ahead of the Championship.

"There were about seventeen of us competing, so we had a Discord group and obviously tested together," he said. "We split the team up so that most of us were on Alchemy and then some of us were on Historic, and then we shared our tech and our decks with each other."

Kassis was part of the Historic team, which landed on Izzet Phoenix with a black splash for in the sideboard to beat Food. They chose Izzet Phoenix because of its consistency, though it led Kassis to an underwhelming 4–4 record in Historic.

"I mean, I can't obviously be disappointed now since I won, but it almost cost me not getting there."

Thankfully, Kassis was able to make up the difference in the Alchemy rounds with the team's Orzhov Ventures deck, which led the Alchemy field in overall win rate. Though the team initially built the deck to beat Gruul and Runes—two archetypes that didn't appear at nearly the rates they expected—it ended up faring well against a field full of other midrange contenders and Mono-White.

"I guess I really like grindy value games, so to me, it was really appealing. I'm definitely a midrange player."

In addition to finding and tuning the Orzhov Ventures deck, working with his ChannelFireball teammates helped Kassis map out strategies and sideboarding for potential matchups, a crucial piece of preparation that can help streamline players' thinking during long days clogged with decisions.

"I'm very big on organization and having a strategy to implement. We've got tons of different documents that we keep notes on for strategies on how to prepare for certain matchups. During a meeting we do before we even submit our decklist, we do the ins and outs for every matchup to make sure that there's just the right number in and out for each matchup that we might face," he said. "All of these little things that take so much time definitely end up mattering a huge amount when it comes to a long tournament."

That affinity for drawn-out, grindy games and having a plan for each matchup was especially valuable in the Best-of-Three-match finals.

"I think the finals was probably the grindiest match that I played, the Mardu versus Orzhov matchup. They're playing a lot of the same cards, so it feels like a mirror, but they have just a little bit more grind to them than we do given that they have an extra color to draw from. So, I think that matchup was the most interesting one I played and had the most play to it."

While Orzhov Ventures didn't have access to red and the especially impactful cards like that came with it, it did have a powerful, and until this weekend underutilized, tool in the dungeons.

, , and introduced to Magic with Dungeons & Dragons: Adventures in the Forgotten Realms last summer hadn't yet seen much Constructed success. Recent Alchemy rebalances, though, finally let the three of them shine.

"The fact that there are three different dungeons and they have so many different lines of text makes it so that there are a thousand corridors that you could take to steer the game," Kassis explained. "It's a lot of fun to know that you have that kind of flexibility and reach, and sometimes pulling off cool tricks, like using the third dungeon to drain them for one and then another trigger to drain them for two to win out of nowhere, or using the first dungeon, , to go long in a grindy match, like against Mardu. So it's just cool to have that kind of flexibility in a deck where you can do a whole lot of different things."

We got to see the value of all three dungeons during Kassis's journey through the Top 8. finished off quarterfinal's opponent Jim Davis, while was a frequent choice for Venture players all weekend. In the finals against Zach Dunn on Mardu Midrange, though, had its moment.

While it's a long and twisting journey to the end of The Mad Mage's dungeon, it was the right choice for the tooth-and-nail fight in the finals. helped Kassis seal his victory and quickly gave him a new nickname from the community—The Mad Mage.

It's a nickname Kassis is thrilled to have. Now, he hopes to have the benefit of that same collaboration for the next big benchmark event he's heading to—Magic World Championship XXVIII.

"I'm still with Team ChannelFireball on Discord, and I'm sure we're all gonna be testing together, and I'm sure a bunch of them are gonna qualify also and that'll form our tight-knit testing group for it. So I'm looking forward to playing again with them. They haven't steered me wrong yet."

That's months away, though, as is the next set championship. For now, Kassis is still growing accustomed to the title, whether it's Neon Dynasty Champion or The Mad Mage.

"I think right now it's a little surreal. I'm still letting it sink in and processing it."

Kassis guided his Triumphant Adventurers through a stellar Top 8 to secure his win and put Orzhov Ventures on the Alchemy map. GGs Eli! pic.twitter.com/wcqXGnZGwI