It was the "Infinity Faeries" that made Modern for me.

The first Modern Pro Tour. Philadelphia, 2011. Magic history in the making, as more than 400 players converged with a singular goal: break the brand-new format Wizards had introduced to the Pro Tour just three weeks earlier. A barebones banlist preceded the tournament, but as teams from across the globe came together for a final sprint toward the finish line that was the beginning of the tournament.

It was an event like none before and like none since. In an age where smartphones were not yet ubiquitous and decklists weren't shared within seconds on Twitter the idea of a brand-new format with truly no exploration was revolutionary. It introduced us to moments that have become iconic to Magic lore, perhaps most notably the Kibler Shuffle. From the game-breaking combo decks that populated the Top 8 to the spectacle that surrounded the event and the accompanying convention, it's an event that's been remembered fondly for the past decade and change.

But I digress. Back to Infinity Faeries.

That, my friends, is the advent of Splinter Twin, in the hands of Samuele Estratti. One of the best Modern decks ever, and responsible for some of the best memes this side of . To this day it's one of the most talked about cards in a format you can't even play it in.

By the way, that video above? That's the earliest Magic work of Nate Holt and Shawn Kornhauser, who would go on to create dozens of episodes of the web series Enter the Battlefield.

I bring all of this up for a couple of reasons. For starters, it gives me the opportunity to mention that no matter how much Modern has changed in the 11 years since that landmark tournament, some things thankfully remain the same—like my column mate Frank Karsten breaking down everything you need to know about the Modern metagame today. 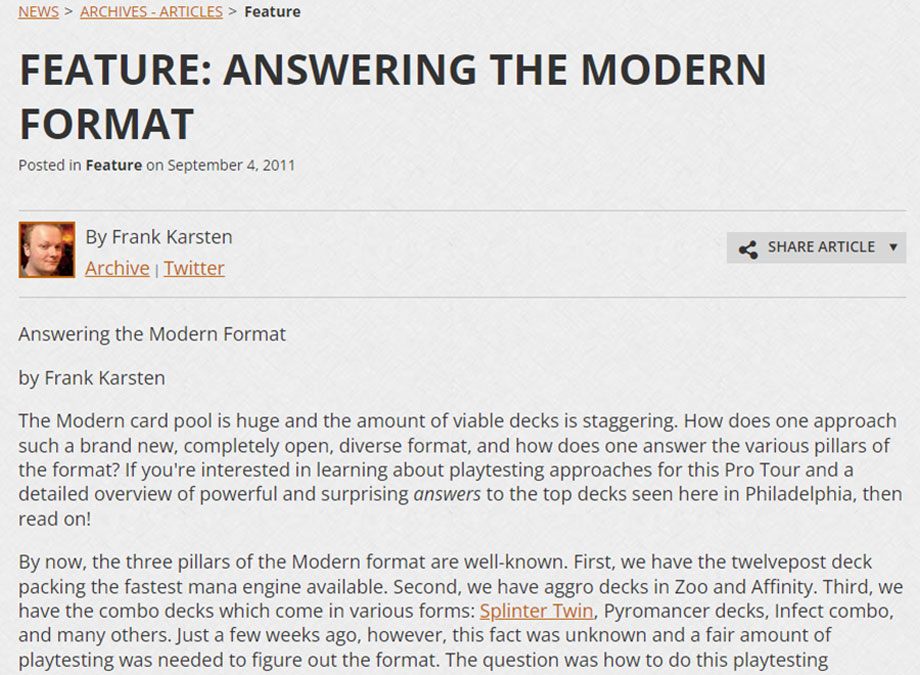 Frank Karsten's articles are always timely, but his work is timeless.

What I'm trying to say is that Modern has always held a special place for both the larger Magic community and myself personally: I watched that tournament from home, dreaming of one day doing Magic coverage or winning an event. With Regional Championship qualifying season upon us, the time for Modern dreams to come true is back.

Which brings us to Claudio Henrique Miranda and the Magic Online Champions Showcase Qualifier.

Miranda is a relative newcomer to the competitive scene, but he's been playing Magic since 2014 and the Journey into Nyx prerelease. Hailing from Brazil, Miranda soon had the chance to begin to up his game as he started playing at Friday Night Magic and the occasional PPTQ.

"Skip a couple years and I wanted to prepare for the LATAM series organized by Willy Edel in 2020, so I started playing Magic Online as a way to improve at the game," Miranda explained. "Now you can often find me online in the Pioneer streets."

Not that his Modern prowess is lacking either, which Miranda demonstrated to the world a few weeks back when he bounced back from an opening round loss to win seven rounds of Modern in a row and take down the MOCS Qualifier—earning himself a seat at the end-of-season Magic Online Champions Showcase event and qualifying for the Pro Tour while he was at it.

He did it on the back of combo, a fitting homage to that first Modern Pro Tour (which, asie from Splinter Twin, featured more iconic combo decks like Pyromancer Ascension, Blazing Shoal Infect, and the combo unto itself that is and friends).

"The last Modern deck I actually owned was the old Bridgevine deck centered around sacrifice synergies, and , so when I saw this funny deck playing it just resonated with me," he explained. "You can assume many roles in different matchups and board states but playing the scrapy creature beatdown plans are my favorite type of games. Yawgmoth is the kind of deck that is insanely rewarding to learn, and it has become my go-to for the format whenever I have some tournament to play."

Miranda's mastery of Modern earned him his first major tournament victory, but his consistent work and results had already earned him a stellar reputation among online deckbrewers. For the MOCS he worked with a team that included Sam Rolph to leverage the complicated Yawgmoth deck that uses its namesake (or ) to combo with undying creatures like or to create an arbitrarily large number of triggers, all tied together by .

"For this event I considered playing Four-Color Yorion, but it was clear I would be outskilled in the long mirrors due to my inexperience with the deck," Miranda explained. "Leveraging my skill with Yawgmoth was my next best option, so with the help of some friends we tried to tune the deck for the narrow field we were expecting – thanks a lot to @unhingedbasic, @SamRolph3, and @PiemontiAndrea and the rest of Team TaC."

"After losing Round 1 to Amulet Titan I was almost off it, but I managed to pull myself together and played mostly against the field we prepared for," he continued. "It all culminated in the finals, where I had insanely close calls and was running on fumes mentally; the Yawgmoth deck is very taxing to play. It was so much that when Game 3 ended it took me a while to realize what had just happened."

It may have taken a while to sink in, but Miranda now finds himself qualified for a big slate of high-level Magic tournaments. His path to the Pro Tour began at a Journey into Nyx Prerelease almost a decade ago and long after Estratti's victory in Philly. But Modern is as popular as ever as Magic nears its 30th anniversary, and it's innovators like Miranda making it as special today as it was when Nate Holt's mysterious wizard introduced us to the madness of Modern.

"I played a couple of these qualifiers before but always fell short at the end, so I can't really put into words how much this meant for me," Miranda reflected. "Playing the MOCS when the format is going to be my favorite is really a dream come true. This will be my first time in the 'big leagues' but I'm going to give it my best and aim for the top!"

Modern is on the docket again this weekend. You can find a Modern Open at the F2F Tour in Grande Prairie, while the Grand Open Qualifier at the Magic Showdown in Copenhagen will be streaming Modern.

There's also the $25,000 Team Trios event at SCGCON in Baltimore, Maryland this weekend. Featuring Legacy, Modern and Pioneer, the tournament is sure to showcase the best players in the region and deliver us a snapshot into three eternal metagames all at once. Looking at the online landscape, there's also a qualifier weekend on MTG Arena featuring the Alchemy format.

As the year winds toward the Magic 30 celebration in October, much of the metagame action will take place at the qualifier levels across the world. That means that we can expect Modern to largely revolve around the current set of circumstances that led to Miranda's victory—and you can be sure to find him and his trusty Yawgmoth deck on Magic Online.