Sam Rolph had to step outside. He needed air. A break to calm his nerves and reset his mind. His head was spinning as he tried to shake off the disappointment. An 0-2 start is a death knell in most tournaments, and Rolph faced that disappointment after a nightmare start to Arena Championship 1.

This wasn't how it was supposed to go. This was the tournament that Rolph spent weeks preparing for, exploring the Alchemy format like no one else and ending up with a plan he was confident in. The tournament that could open doors to the young competitor and unlock his career.

"I really wanted to win this tournament, and I was confident," he reflected. "My Constructed decks, my pick orders—I felt incredibly prepared. The format gives you a lot of room to play well. I knew what I was doing and I had clear plans."

Mike Tyson said everyone has a plan until they get punched in the mouth. Two hours and two losses in, Rolph was feeling bloodied and searching for anything to make it make sense as he made lap after lap around his block.

So he called his friend (and Magic wunderkind) Nathan Steuer.

A major invitational-only event that represents the top of the Arena competitive ladder three times a year, Arena Championship 1 brought 32 of the best players online to battle for a share of $200,000 and a pair of Magic World Championship invites for next year.

It was the culmination of months of dedication for the players, and a chance to get a huge head start on 2023 by locking in one of the first World Championship invitations. To qualify for the small field, the 32 competitors had to start by earning a spot in a Qualifier Weekend event, and then follow that up with a top-tier performance in the Qualifier.

That path to professional play worked out perfectly for Rolph and the rest of the field, a mix of longtime Magic veterans who found new life online and those who were just getting started in their careers. Online play has long been a bastion of the best players you haven't heard of, and this event was no different as it attracted a bevy of online "end bosses" which included several players getting in some warmups before Magic World Championship XXVIII in just a few weeks.

With the online-only Alchemy format the battlefield of choice, the event benefitted anyone who was able to explore the metagame. The Top 8 would end up filled with several different decks and included names you might expect: Hall of Famer Shota Yasooka and longtime Pro Tour player Michael Bonde.

Lost in the Quarters to Rakdos Sac. Which was good for 10.000$. Very happy with my preparations and my play overall and proud of myself for top 8’ing!

Thx to my testing team - it really was a blast getting to explore af 100% uncharted format.

All of this sounded great to Rolph, who built a career out of dominating online events after his initial breakthrough with the Welsh national team in 2017 and 2018 (including a World Magic Cup Top 8 appearance). As play moved online, his skills transferred with it and soon Rolph was taking some pretty big leaps. He turned a strong performance at the Strixhaven Championship in 2021 into a Rivals League invitation, and things really took off from there for the Ramsey native. He posted two heartbreaking 9th place finishes at the Innistrad and New Capenna Championships that, nonetheless, showed that he could compete with the best in the world.

But the Arena Championship was supposed to be different. He had spent countless hours both practicing and theorizing what the format might look like, and he was so confident in both his Constructed deck and his Dominaria United draft plan that he even took a few days off before the tournament started to keep his mind fresh.

All of that—and an 0-2 start staring him in the face, anyway. Rolph needed a lifeline.

"I was frustrated," he recalled. "So I went for a walk and called my friends, Nathan Steuer and Owen Collier-Ridge. They gave me the pep talk I needed—they told me that as well as I knew this Constructed format and how my deck was. If anyone can come back from the 0-2, it's you."

He took those words to heart. Some fresh air to clear his mind had helped; the confidence his friends still had in him did the rest.

It started slow. He picked up a win in the final draft round to salvage the morning and turned his sights to the next step: advancing to Day 2.

1-2 managed to recover. Honestly so happy to avoid the nightmare 0-3 would have been real upset as my deck is so good. pic.twitter.com/pExXjki9NJ

The good news is that play was heading to the Alchemy format and the Rakdos deck that Rolph had pioneered for the tournament. In fact, while it would go on to be one of the popular and best-performing decks in the field, the 75 that Rolph looked to carry wasn't all that different from where he had started weeks earlier.

"I was invited to a couple of teams, but I decided to work on my own for this event," he explained. "I had played a lot of Alchemy and with rotation coming in the first thing I did was figure out the mana base and the cards I could play well with each other. I felt like I had a really good handle on it but I did work alone and when you do that you have to very sure of what you're doing – you have to figure out the truth of the format all your own. I did waste some time testing combo, but I locked in on Black-Red early. The initial list I sent to Owen ended up being about three cards off from the 60 I submitted—I sent him about 10 decks and the Rakdos one was the one he thought looked broken."

"So that gave me confidence in what I was doing. So from there I ran it into Esper over and over until I felt good about the matchup and was chopping games. That's when I knew I was onto something special."

As the Alchemy rounds played out everyone else would soon know, too. He began racking up win after win. As Day 1 turned into Day 2, Rolph just kept winning.

"I knew I had to win every round to get there, and my back was up against the wall; I was definitely sweating it out," he explained. "Next thing I know I'm in the Top 8 and beating Pascal [Vieren] and then Ivan [Duris] and I'm playing against Sato in the finals."

A whirlwind for Rolph, but one that wasn't finished spinning him around quite yet.

"I actually lost the first match of the finals and I thought it was over until the coverage had to tell me it was actually best-of-three matches and I still had games to play!" he recounted with a laugh. "I rush to get back to my PC and run upstairs, shouting at my mom that I was still alive as I went. The final match was super back and forth, great games. And in game three I had the perfect draw and it all came together." 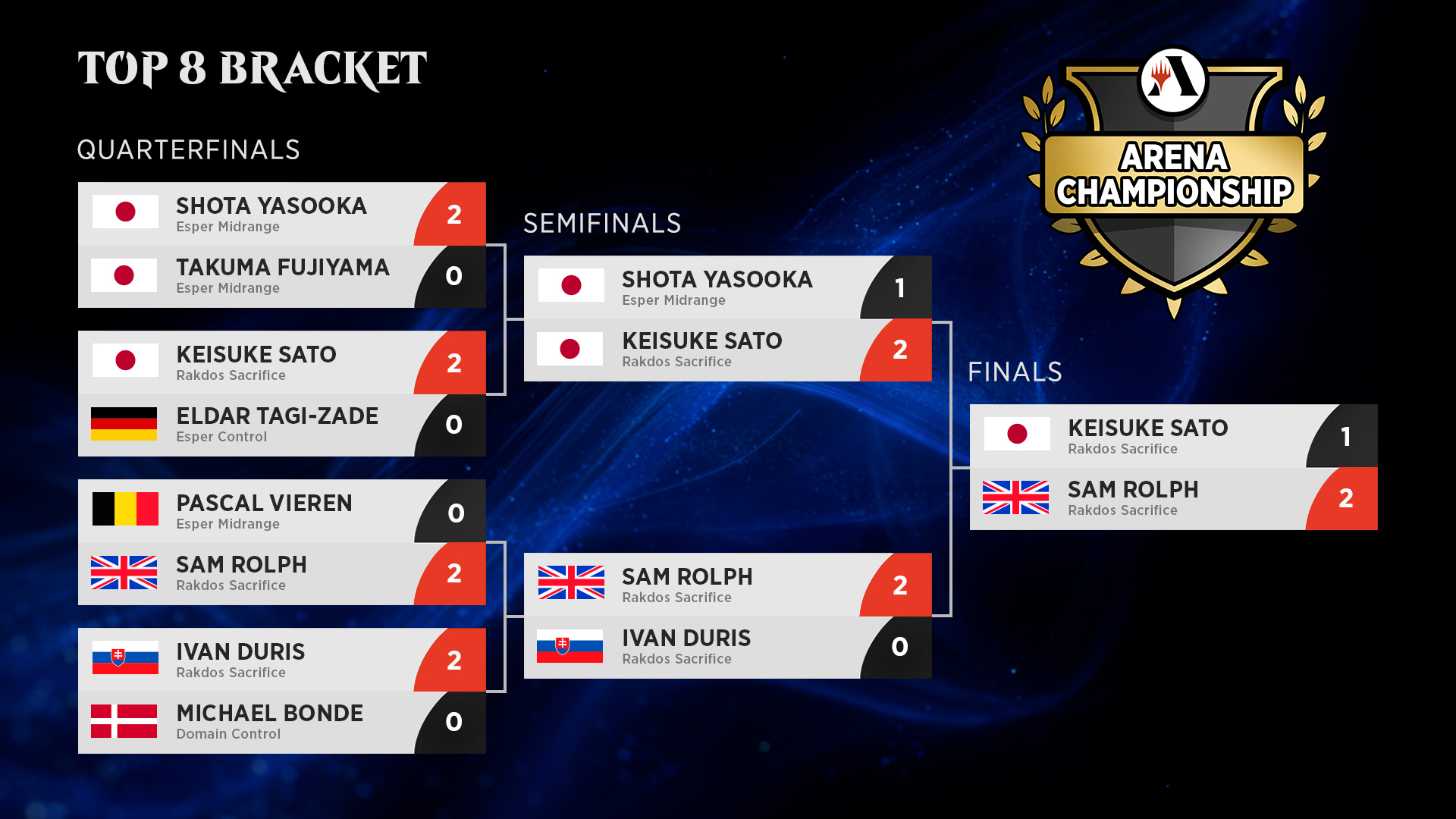 At that moment, all Rolph's mom (and anyone near their house) heard was a scream: a shout of joy as Rolph finally put all the 9th-place finishes and broken drafts behind him. He was now the champion of the first Arena Championship.

"It was just overwhelming support and love as soon as coverage finishes and your socials blow up," he said. "It was too much to take in. After the two 9ths, where I came so close after working so hard. I was even thinking about retiring from playing so much. Now I'm qualified for the World Championship and there's still Magic Online Champions Showcases I can play."

Rolph is no longer knocking at the door. He's no longer an "up-and-coming" pro-level player. He's a champion, a future World Championship competitor, and cemented himself as one of the best in the game right now. Who knows, with the kind of pep talks his friends give, maybe Rolph will be able to accomplish the latest challenge he's set for himself?

"I want to be ranked No. 1 on the MTG Elo project," he admitted. "To be number one on there, you have to earn those points to make it there, and I think I'm maybe 100 away from the top right now. With the tournaments coming up, I'm going to push very hard for it!"

All my socials blowing uppp aaaaaa!!!

I FINALLY WON A BIG ONE BABYYYY!

It's another busy weekend of Magic ahead of us as we continue our sprint to Magic 30 and Magic World Championship XXVIII in Las Vegas at the end of October.

The next date to watch is October 8-9 in the online realm, when players will compete in the Magic Online Champions Showcase 2022 Season 2 and put both Pioneer as well as the Modern Cube through its paces!

In tabletop play, this weekend has a slew of Modern qualifiers across the globe, including The Legacy Pit Open, the F2F Tour Stop in Montreal, and the Magic Showdown in Amsterdam. The Amsterdam event will have live video coverage. Next weekend, October 8-9, there will be Modern $30,000 and Modern $5,000 tournaments at SCG Con Dallas, both of which award Regional Championship slots.