It's almost here: The Zendikar Rising Championship, featuring the 72 members of the Magic Pro League and the Magic Rivals League as well as top players from qualifying events held on MTG Arena and Magic Online, begins Friday, December 4 at 9 a.m. PST.

In total there are 184 competitors battling for $250,000 in prizes across Standard and Historic. In addition to monetary prizes, excellent finishes also contribute towards qualification for the 2020-21 postseason, which will determine the new invitees to next season's MPL and Rivals League.

Friday and Saturday each feature four rounds of Standard. The metagame breaks downs as follows. 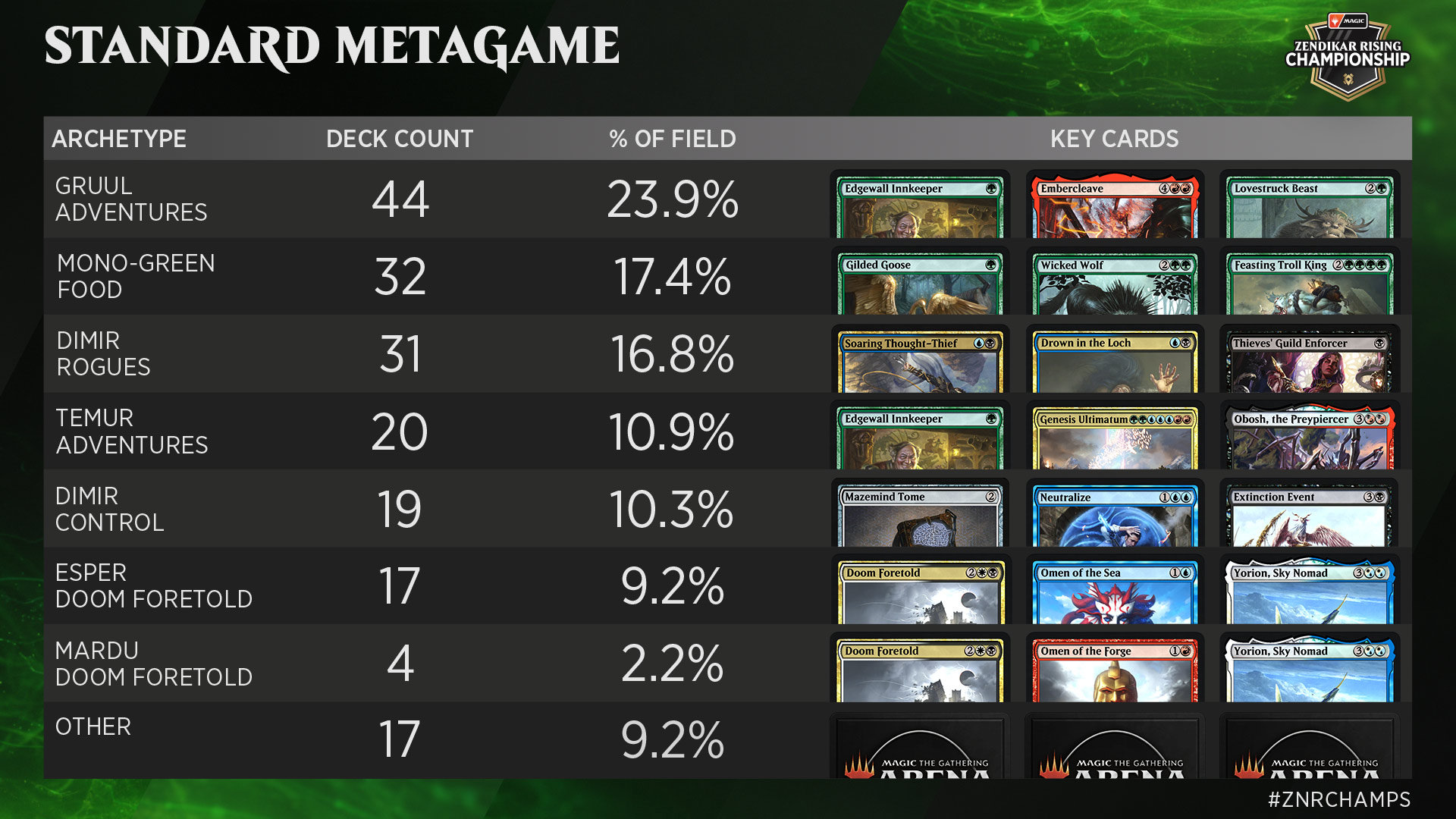 and , with 408 copies and 379 copies each respectively, are the most-played nonland cards across Standard decklists. If you had followed the October League Weekend and the November League Weekend, then the first deck that might spring to mind upon seeing these green three-drops is Gruul Adventures.

Indeed, that's the most popular Standard archetype at the Zendikar Rising Championship. 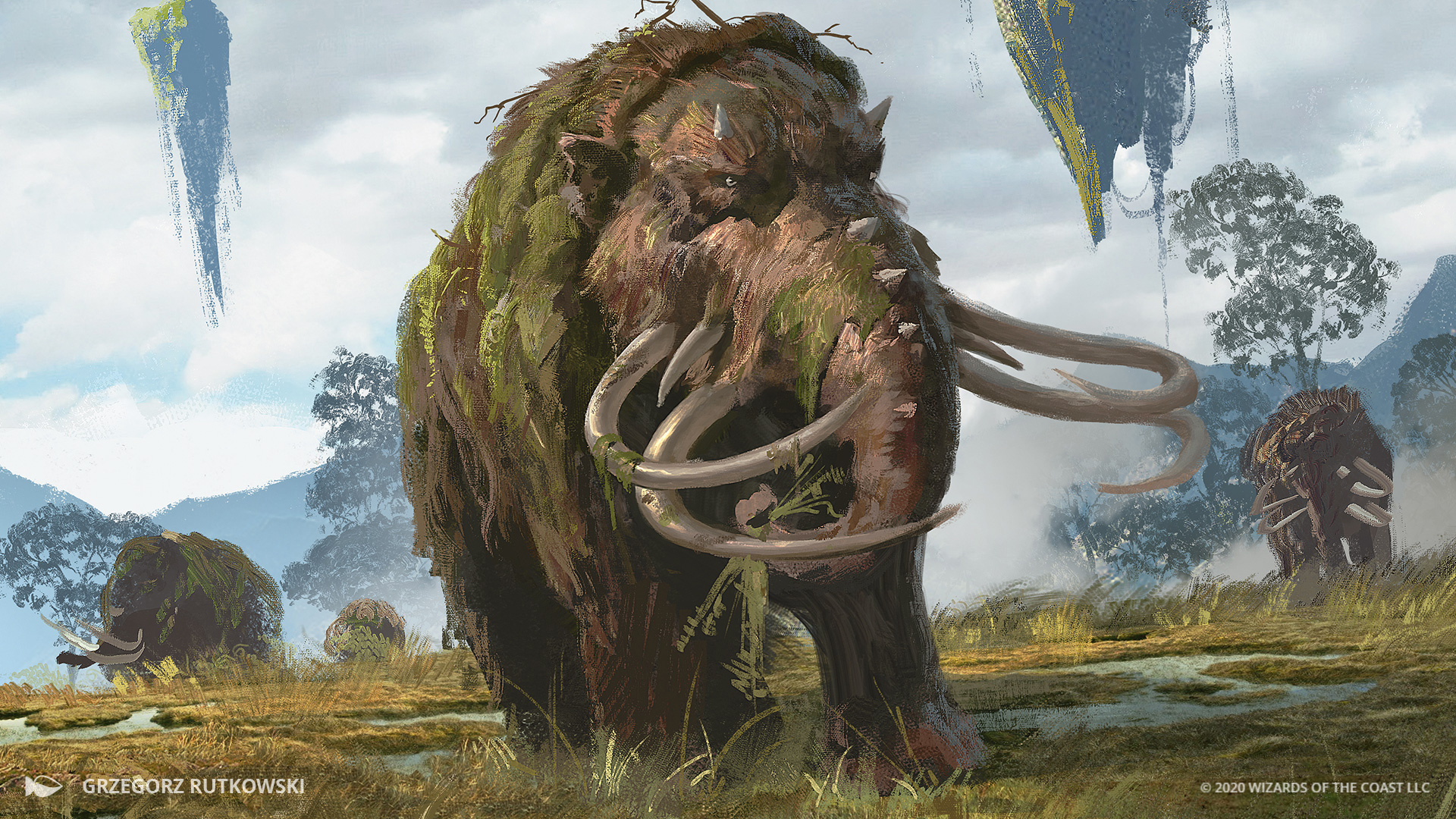 But there's more to than Gruul Adventures. It's also played in two other green decks, and both saw a meteoric rise over the last three weeks.

The first is Mono-Green Food. After setting up with and Trial of Crumbs, and will dominate the battlefield, resulting in a good matchup against Gruul Adventures—at least based on MTG Melee results over the past two weeks. So the rise of Mono-Green Food largely came as a way to prey upon the most popular deck in the metagame.

The second green deck that's risen in popularity over the past few weeks is Temur Adventures, gaining ground as an answer to Mono-Green Food. Even though and are things of the past, and can out-grind , resulting in a favorable matchup against Mono-Green Food.

It is important to note that Temur Adventures is different from Temur Ramp. Temur Ramp uses ramp spells such as or to quickly cast expensive game-winners like . Temur Adventures, by contrast, usually has as the companion, which means that it can't even run those even-costed spells if it wanted to. Instead, it's a midrange deck built to take advantage of .

A final metagame development worth noting is the surge of Dimir Control. The perception is that this deck is strong against everything that tries to beat Gruul Adventures.

Looking for a good ladder deck at the end of the season?

That's my #ZNRChamps standard list, that turned out to work great on the ladder as well.

Historic one is way more spicy, so I'll reveal it closer to the event.

Good luck to everyone fighting for # 1200! pic.twitter.com/XzAhBfxTb2

Dimir Control doesn't play or . Instead it's filled with reactive cards like , , and . provides a steady flow of cards, and winning is an afterthought. Maybe you eventually close the game with ; ; or —the typical companion—but this really is a control deck in its purest form. The number of main deck slots dedicated to win conditions is kept as low as possible to maximize the number of answers and card draw spells.

All in all, the continuous metagame shifts over the last month-and-a-half are a sign of a healthy format. Although hyper-aggressive decks such as Mono-Red Aggro are largely absent—they are in trouble as long as remains the most-played card—there is a nice mix of strategies beyond that. The Zendikar Rising Championship Standard metagame even features some spice like Naya Winota—curving into a turn-three —and Jeskai Control, featuring and . All Standard decklists will be published on the Zendikar Rising Championship event page at the beginning of Round 1 on Friday, December 4.

Friday and Saturday each also feature a combined seven rounds of Historic, and Sunday's Top 8 double-elimination playoff is exclusively Historic. The metagame breaks downs as follows. 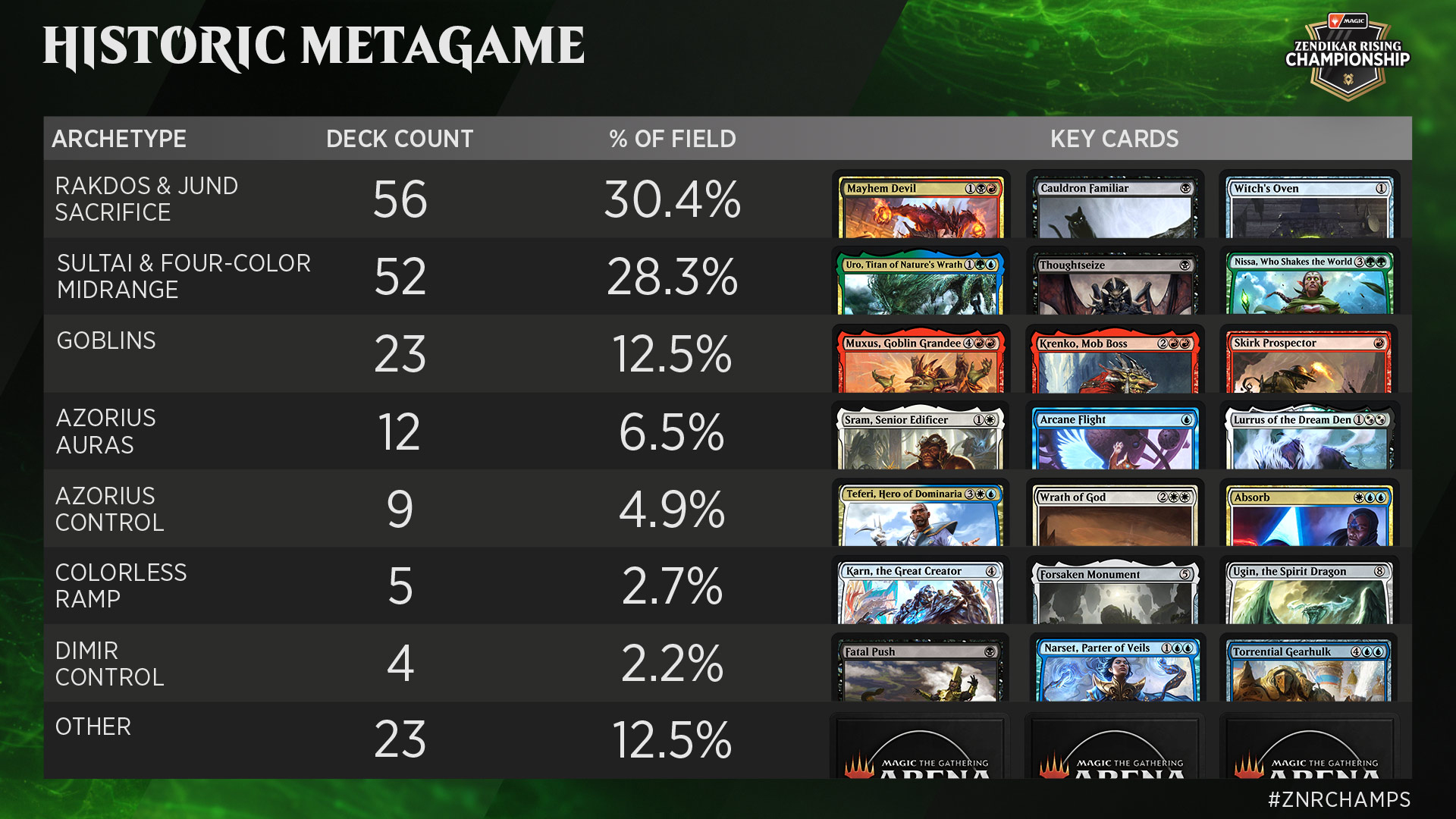 Nearly three months ago, the 2020 Mythic Invitational marked the debut of Historic on the Magic Esports stage. There, the three biggest archetypes were Goblins, Jund Sacrifice, and Sultai Midrange. With the understanding that Four-Color Midrange is essentially Sultai Midrange with a white splash for , the three biggest Historic decks at the Zendikar Rising Championship are the same as at the Mythic Invitational.

Nevertheless, the card choices and the format have been shaken up by the release of Kaladesh Remastered. Let's break down the most-played cards—summing over all main decks and sideboards at the Zendikar Rising Championship—from this new set on MTG Arena.

, with 255 copies in the Championship and one of the most efficient interactive spells of all time, was bound to have an impact. In other formats with overlapping sets, such as Modern and Pioneer, and are consistently near the top of the most-played nonland cards—and they are number one and two among all submitted Historic lists here.

easily slots into most black decks, but it's been a particularly important addition for Sultai and Four-Color Midrange because and turn on revolt with ease.

, with 109 copies, may not fit the slower Sultai or Four-Color Midrange decks but it's widely adopted by decks like Jund Sacrifice that need enough early untapped lands to consistently cast one-mana creatures on turn one. The other lands in the cycle, such as and , have also been included by a variety of decks.

—94 copies played—is a resilient two-drop that provides plenty of synergy. Need a creature to sacrifice to or without losing a card in the process? Need an artifact to enable ? is what you want for both. The card is seeing the most play in Rakdos Sacrifice, which has turned out to be one of the main beneficiaries of Kaladesh Remastered. Jund Sacrifice is still more popular, but the cards from the new set seem to be a better fit for the leaner, more aggressive two-color variant.

, at 51 copies, may be worse than but a secondary card draw engine has made Azorius Auras and Orzhov Auras much more consistent. Of these two, the Azorius variant is far more popular indicating that it's better to enchant your creatures with , , than to eke out value with and . But for both archetypes, Sram is a sweet addition.

—33 copies, of which 21 among main decks—is an alternative to or for midrange or control decks. There are advantages and disadvantages to all of them, but the ability to sweep your opponent's creatures while leaving your own Yasharn alive and playing for free has convinced many Four-Color Midrange players to include .

(27 copies) is the perfect land for decks with energy cards, and it's a great pickup for Colorless Ramp, which is a relatively new archetype based around Zendikar Rising's .

The deck derives its name from the colorless theme with ; ; and . But it's not a strictly colorless deck, as it tends to include as removal. As such it's interested in any land that can tap for both colorless (for ) and black (for ), which is exactly what provides.

This becomes even more clear when looking at the archetypes with four of fewer players. To highlight this diversity of Historic, here's a quick one-sentence introductions for all of them.

Dimir Control (4 players): Answers threats with and , pulls ahead with , and takes over the game with —a Kaladesh Remastered reprint—which ideally targets Commit//Memory during the opponent's draw step while controlling Narset.

Kethis Combo (2 players): This intricate combo deck fills the graveyard with , activates , recasts a bunch of s, does it all over again, puts most of their deck into their graveyard, recasts all legendary cards, and then wins somehow.

Sultai Paradox Engine (2 players): More fun can be had by combining it with —a Kaladesh Remastered reprint—and .

Azorius Cycling (2 players): It may look like a typical Azorius Control deck at first, but the large number of cycling cards to fuel and indicate otherwise.

Orzhov Auras (1 player): and unite again, this time joined by and .

Orzhov Yorion (1 player): is the driving force, as blinking it with or sacrificing it to provides a lot of value.

Mono-Red Planeswalkers (1 player): turns and into Dragons while —a Kaladesh Remastered reprint—holds the fort.

Boros Burn (1 player): and set things on fire quickly, while from the sideboard can recur —another Kaladesh Remastered reprint—if the game goes long.

Esper Yorion (1 player): Reminiscent of Esper from Standard, this Historic version adds 4 main deck to limit the effectiveness of any opposing Uro, , or .

Mono-Red Aggro (1 player): There's and like in Standard, but and remind us that the early drops are far better in Historic.

Nine Lives (1 player): More like Infinite Lives when you've locked out your opponent with and .

Mardu Vehicles (1 player): , , and —all of which stem from Kaladesh Remastered—take us back to 2017.

Esper Gift (1 player): Thanks to —another Kaladesh Remastered reprint—there is now a critical mass of cheap mill effects to put the trio of , , and into the graveyard.

Four-Color Control (1 player): It's similar to Four-Color Midrange, but this is a more controlling build without or .

Boros Knights (1 player): Curving into and is also possible in Standard, but and are unique to Historic.

Dimir Rogues (1 player): You might think that someone misclicked and submitted their Standard deck for Historic, but this list is actually supercharged with and .

Neostorm (1 player): The goal is to cast , sacrifice it to , and put all s and s from the library onto the battlefield.

All Historic decklists will be published on the Zendikar Rising Championship event page at the beginning of Round 1 on Friday, December 4.

Competitors have been enjoying both Standard and Historic while preparing for the Zendikar Rising Championship, and I personally can't wait to see which decks will perform the best.

I have really enjoyed playing Historic while preparing for the #ZNRChamps. Lots of different decks and diverse metagame is always fun.

I really hope they keep an eye on the format and make sure its balanced moving forward.

Standard has actually been quite enjoyable too. 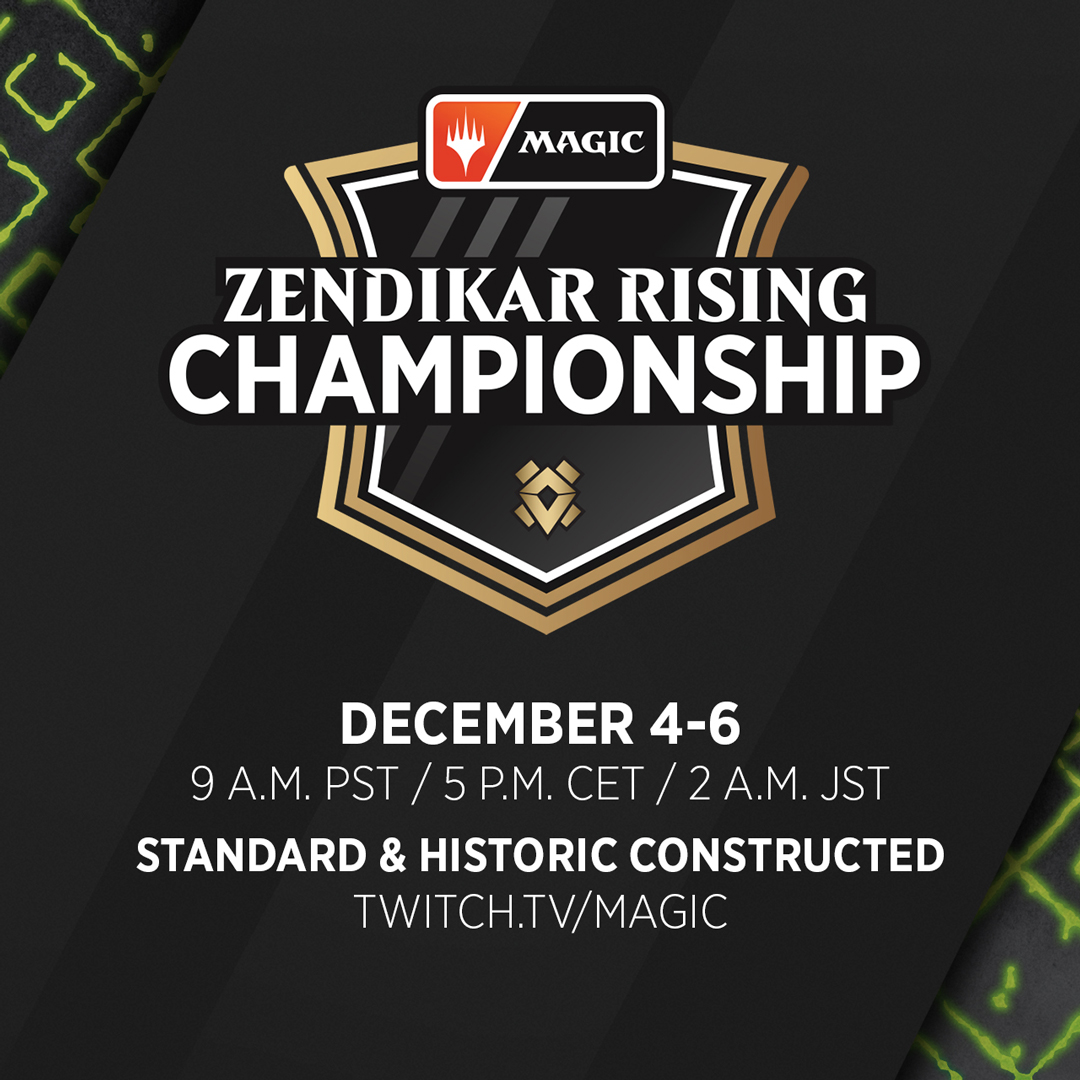