Qualifier Play-In events are the first step of Magic: The Gathering Arena's Premier Play. These are single-day tournaments in which players who earn maximum wins earn invitations to compete in that month's Qualifier Weekend.

Qualifier Play-In events held during the second season of the Arena Championship Series will take place on the following dates:

Additional means of invitation to a Qualifier Play-In event are provided at the sole discretion of Wizards of the Coast.

Players who complete a course of the event types listed below with maximum wins will earn the amounts of Play-In Points shown:

Players who finish in places 251-1,200 in either Ranked Ladder (Constructed or Limited) will be granted 20 Play-In Points during the first full week of the month following that ranked season. They will also receive an email invitation with their final standing as well as Qualifier Play-In details.

If you believe you have qualified or are due a grant of Play-In Points (via the Ladder or via another method), and you do not see the Qualifier Token or Play-In Points on your account after the first full week of the month, please contact Customer Service as soon as possible.

Players will receive prizes based on the number of match wins they earn in their course as follows:

Players will receive their gem and token awards once they have completed their course and select Claim Prize.

January 2023 Qualifier Weekend's gameplay format is Alchemy. Players compete in either Best-of-One or Best-of-Three events with a minimum 60-card main deck with up to 15 cards in the sideboard. 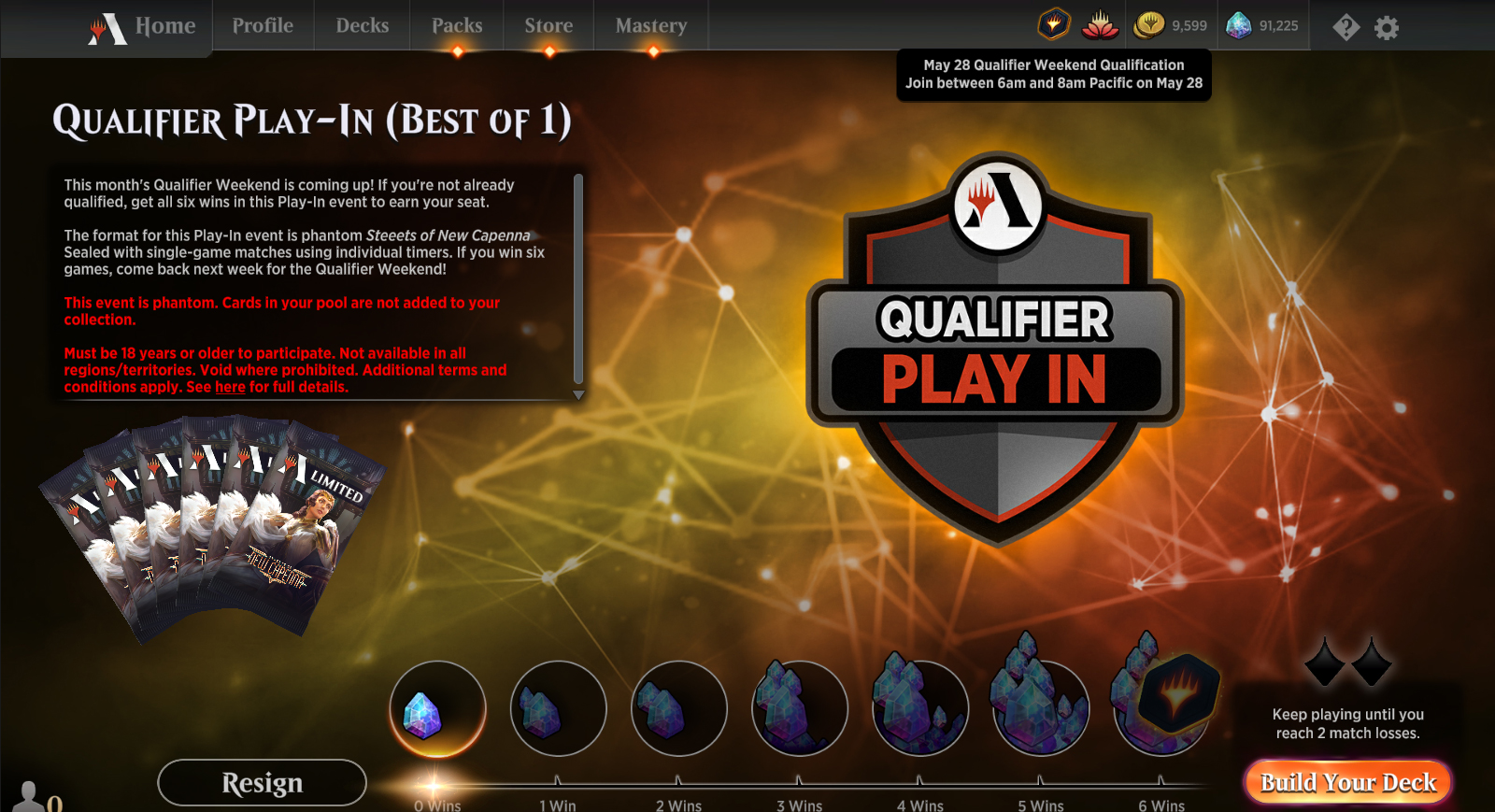 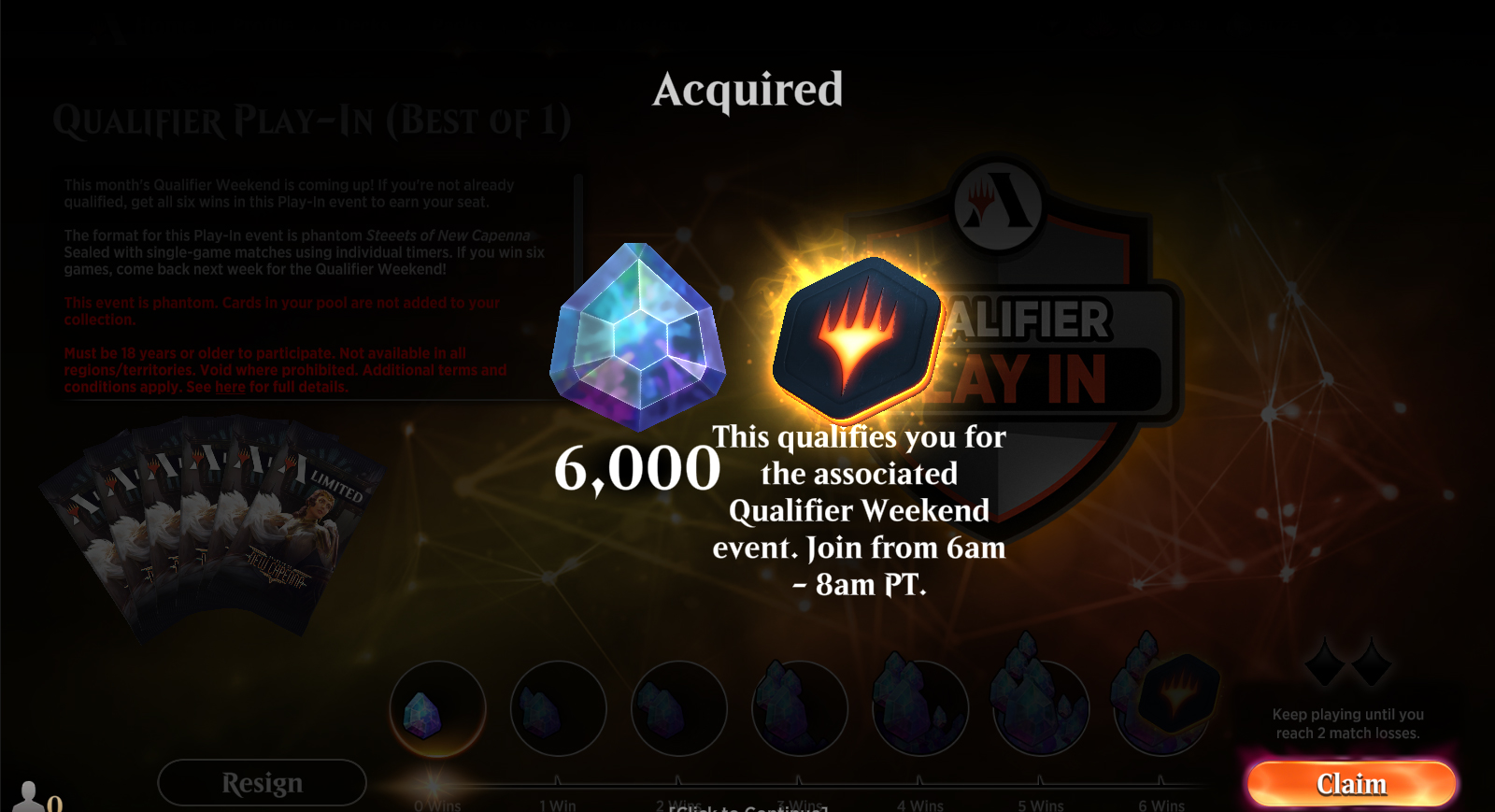 8 a.m. PT (15:00 UTC): Matchmaking queue is disabled. Matches in progress will be allowed to finish until the event ends.

6 a.m. PT (14:00 UTC): Matchmaking queue is disabled. Matches in progress will be allowed to finish until the event ends.

Players who compete acknowledge that they have read the tournament rules and are competing on hardware that meets the recommended hardware specifications for running Magic: The Gathering Arena.

It is not recommended that players compete in Qualifier Play-In events on a mobile device or any platform in early access. Players who do so assume all responsibility for gameplay or connection issues they experience.

Wizards of the Coast reserves the right, at its sole discretion, to suspend, modify, and change its events at any time and for any reason without notice.

Players can typically earn the Qualifier Token by finishing in the Top 250 of either Constructed or Limited ranked play at the end of the ranked season.


Only matches completed by the season end time count toward the final ranking for the month.

Players are expected to compete under the implemented rules for Magic: The Gathering Arena.

Each player will have 30 minutes on their respective match clock that will count down whenever that player has priority. To see the clock, hover your cursor over the bottom left corner of the screen beside your display name.

If a player runs out of time on their clock before the current game finishes, they will lose the match regardless of the current board state.

Players should review known issues in Magic: The Gathering Arena prior to participation in Qualifier Play-In events. Wizards is not responsible for impact on the game because of players experiencing known issues.

Once a player qualifies for the Arena Championship, they become ineligible to participate in other Qualifier Play-In events and Qualifier Weekends feeding that Championship. Players who qualify for the Championship will have their Qualifier Token removed if they otherwise would receive it through monthly ranked season performance.

That player can continue to compete in Magic Online Premier Play.

All prizes are awarded "as is" and without warranty of any kind, expressed, or implied (including without limitation, any implied warranty or merchantability or fitness for a particular purpose). This is a contest of skill and, therefore, there are no odds of winning as is the case with a game of chance. All applicable taxes, fees, duties, tariffs, passport or visa costs, and any license, destination, entry, exit, and/or delivery charges are the sole responsibility of each player. Taxes on prizes (including, without limitation, income taxes), if any, are the sole responsibility of any player winners.

Invitations to the Arena Championship are contingent on signing a waiver and consent form. These documents will be provided to all competitors who receive invitations so that they can sign and submit prior to attending the event.

Although a player may have multiple accounts qualified for the Qualifier Weekend event, only one of those accounts can be entered into that event. Players are not permitted to have any accounts entered in events played by other players for any reason. If a player is discovered to have more than one account playing in the Qualifier Weekend before, during, or after the event, Wizards may take action against that player's account(s), up to and including disqualification, suspension of the offending account(s), and/or termination of the offending account(s). Using an account other than your own, allowing any other player to use your account, selling your account, and other similar actions are all violations of the Magic: The Gathering Arena User Agreement.

Wizards of the Coast reserves the right to reschedule and/or restart tournaments, matches, extend timers and/or games as needed.

To be eligible to participate in Qualifier Play-In events, Qualifier Weekend, and the Arena Championship, the following requirements must be met:

Employees of Wizards of the Coast and their household members, if related, are not eligible.

By entering Qualifier Play-In events, Qualifier Weekend, and the Arena Championship, each participant and the invited players thereby release Wizards, Hasbro, and each of their respective parent companies, subsidiaries, affiliates, directors, officers, employees, and agencies from any liability whatsoever and waive any and all causes of action related to any claims, costs, injuries, losses, or damages of any kind arising out of or in connection with the Qualifier Weekend and Championship or delivery, mis-delivery, acceptance, possession, or use of or inability to use any prize (including, without limitation to, claims, costs, injuries, losses, and damages related to personal injuries, death, damage to or destruction of property, rights of publicity or privacy, defamation, or portrayal in a false light, whether intentional or unintentional), whether under a theory of contract, tort (including negligence), warranty, or other theory. Except where prohibited, you agree that any and all disputes, claims, and causes of action arising out of or connected with this contest or any prize awarded shall be resolved under the laws of the State of Washington, without respect to any conflict of law issues, and participants agree that such shall be resolved properly, without resort to any form of class action, and exclusively by the US Federal and State Courts of King County, Washington, USA. All of Sponsor's decisions regarding the application and interpretation of the Rules are final.

Wizards, Hasbro, and each of their respective parent companies, subsidiaries, affiliates, directors, officers, professional advisors, employees, and agencies will not be responsible for: (a) any late, lost, misrouted, garbled, distorted, or damaged transmissions or entries; (b) telephone, electronic, hardware, software, network, Internet, or other computer- or communications-related malfunctions or failures; (c) any event disruptions, losses, or damages caused by events beyond the control of Sponsors; or (d) any printing or typographical errors in any materials associated with Qualifier Play-In events, Qualifier Weekend, and the Arena Championship.

Wizards of the Coast reserves the right to modify, reschedule, and/or delete any tournament for any reason, including without limitation, if in its sole judgment that tournament's integrity has been compromised by an unforeseen technical issue and/or error in that tournament's administration.

Participation in Qualifier Play-In events, Qualifier Weekend or Arena Championship event is void where restricted, taxed, or prohibited by law.