It was an incredible set of players, but there can only be one champion. The Top 4 playoff put all four through the paces of dual format playoff matches, with both Pioneer decks and Modern decks making all the difference along the way.

This is how the latest Magic Online Champion was forged.

The Top 4 for the 2019 Magic Online Championship was played as a best-of-three-matches series, beginning with Modern format decks for the first match, then Pioneer format, ending, if a third match was required, repeating the format chosen by the higher seeded player. 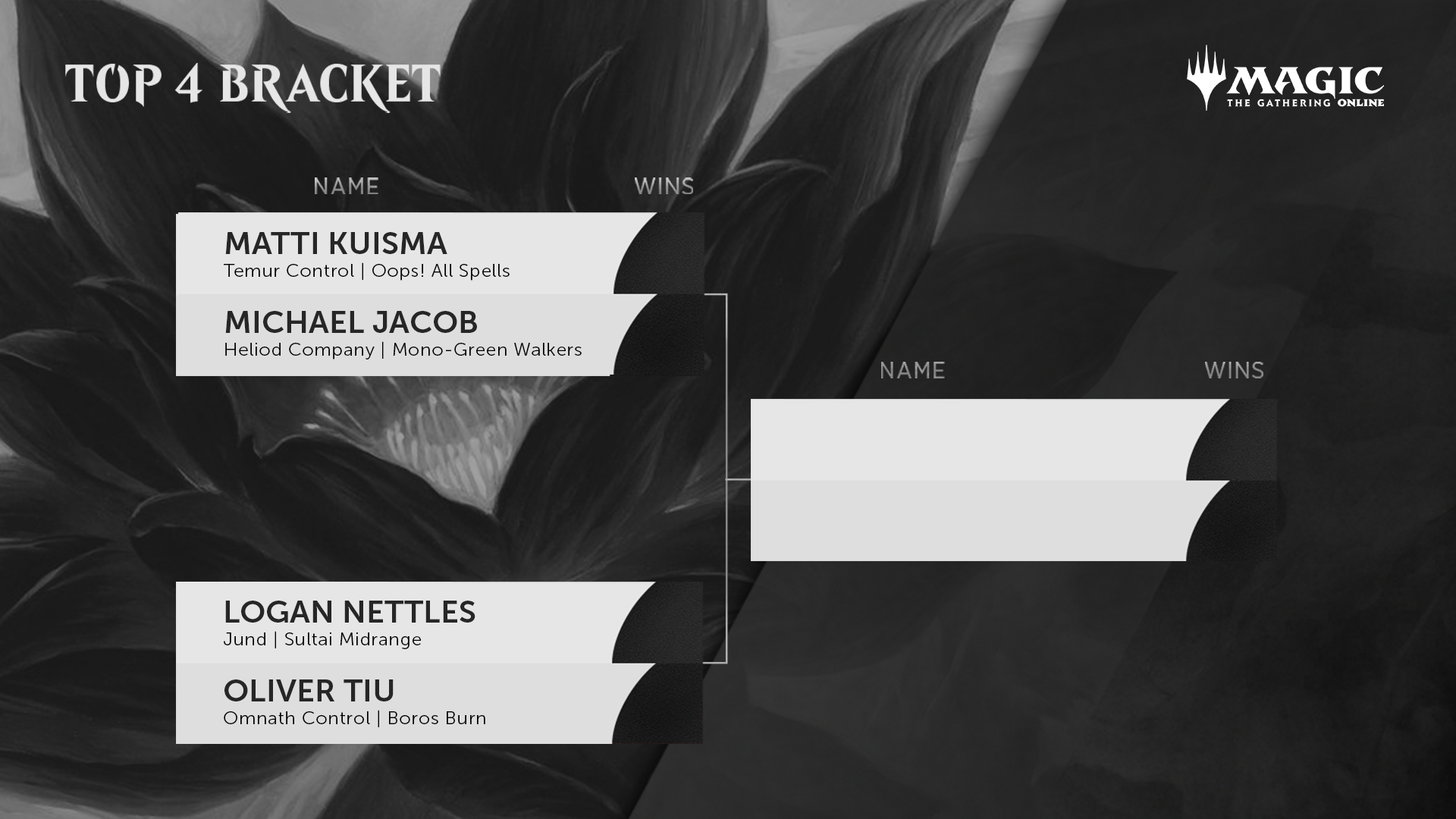 (Check out the Magic Online Championship decklists for Pioneer and Modern to see what the Top 4 played in detail.)

There were two semifinals matches, beginning with the showdown between Olivier Tiu and Logan Nettles that went the full three matches in the series. While Nettles's Jund deck is one of Modern's venerable choices, times change. Tiu's Omnath Control was built using Zendikar Rising's and Theros Beyond Death's . With powerful control spells and an engine of options to use, Tiu's deck overwhelmed Nettles's classic choice.

After taking the first game, Tiu drawing was exactly the kind of corner he needed to turn to close the door.

From there, taking over the game to finish the match win was straightforward as Nettles failed to find useful ways to fight back.

The second match was Pioneer format and switched the roles up. Now Tiu played a deck that was more proactive—Boros Burn—and looked to quickly close games down with damage in just about every card. Nettles had a slower Sultai Midrange deck, with depth built around delirium cards like and .

But the games were really all about Uro, Titan of Nature's Wrath. Gaining 3 or 6 or more life in a turn added to the difficulty of Tiu playing Burn. Nettles didn't miss a beat as he thoroughly worked to maximize every card he drew and life he could gain.

Finding a window to take over a game on the back of countering was exactly how far Nettles's plan could go.

And Nettles left no room for recovery after Tiu kept a one land hand. That set up the third match, where higher-seeded Nettles chose to play Pioneer again. While both games needed went Nettles's way, it was an incredibly tight set that came down to drawing better cards from the top of the library.

Both players were good enough to set up paths to victory, but continuously gave Nettles the edge—and he was the first to advance to the finals.

The other semifinals match featured top-seeded Matti Kuisma taking on Michael Jacob. The Modern start was a back-and-forth affair as Jacob looked to deploy his combos built around as Kuisma's Temur Control deck took aim at stopping such shenanigans. While Kuisma took one game where Jacob was unable to assemble things, the third and decisive game of the first match showed why Jacob chose the deck after testing every other archetype in the format.

Moving to Pioneer, Kuisma looked to find his momentum with an extraordinary deck: Oops! All Spells. Exactly what it sounds like, the deck uses Zendikar Rising's modal double-faced cards, such as , to "not play any lands" which unlocks world of graveyard-based combos based on resolving .

Jacob was prepared. Mono-Green Planeswalkers powers out powerful Planeswalkers such as and . With a toolbox of artifacts waiting in his sideboard, Jacob could pull a tool out for nearly every situation, from to and .

When Kuisma's combo deck sputtered out, Jacob was ready to slam the door shut.

With that, the finals were set.

The Finals: Nettles vs. Jacob

Returning to Modern and featuring two longtime Magic Online competitors, the finals were a throwback to an older era of decks—even if some new cards were being used.

It quickly became clear that each match was going to be a back-and-forth affair. Jacob picked up the first game just as quickly as Nettles nabbed the second.

Ultimately, Jacob's Modern deck could create ways to win in addition to setting up his combos—and that made the difference for the match.

Similarly, the switch to Pioneer kept things close and each player took a game apiece in the second match. The first decisive game, however, found Jacob stumble and that allowed Nettled to even the score and send it to a third and final series.

Nettles, the higher-ranked player, chose to keep playing in Pioneer and see more of Jacob's deck come out of the gates slower. The first game of the third match featured on the third turn, and it snowballed from there.

But Nettles wasn't nearly done. While Jacob had a string of early plays for the second game, they didn't pay off anywhere close to when Nettles landed and together. The game didn't take long after that.

The third game looked to become a fast affair in Jacob's favor. And early flurry of spells led to Jacob with two active Planeswalkers and an . Nettles, fomr drawing just one card off a copy of Uro, needed to find to back up his to turn get back into the game.

From there, Nettles took aim at the Planeswalkers as Jacob tried to find a new way through. With enough counters on , Jacob put into his hand and immediately cast it. Clearing away some of Nettles's best creatures, the Eldrazi chunked out what little remained in Nettles's library.

With so many ways to mill its own graveyard, Ulamog was exactly the threat Jacob needed.

A few swings later and Jacob's celebration erupted as he became the newest Magic Online Champion.

Beginning his journey with the beta client for Magic Online 18 years ago, continuing through years of streaming the game, and now being crowned its latest champion, Jacob's journey is a story he put best into his own words.

Congratulations to Michael Jacob, winner of the 2019 Magic Online Championship!