We've spent the last few weeks eagerly anticipating the professional debut of MTG Arena's Historic format in Magic esports. With 14 rounds of Historic play behind, and the Top 8 is ahead, we've learned a thing or two about the format at the 2020 Mythic Invitational.

Thanks to Magic Hall of Famer Frank Karsten, we have the numbers we need to make sense of it all.

At the start, all eyes were on the third of players choosing to play a Goblins deck. had a grand showing, but it's not the king of Historic: Goblins wasn't among the most successful decks at the Mythic Invitational field. The Mono-Red version of the deck was the most popular selection in the field, and won just over half its matches—a 51% win rate. That's great compared to the Rakdos ("the version") version of Goblins which won just 39% of its matches. 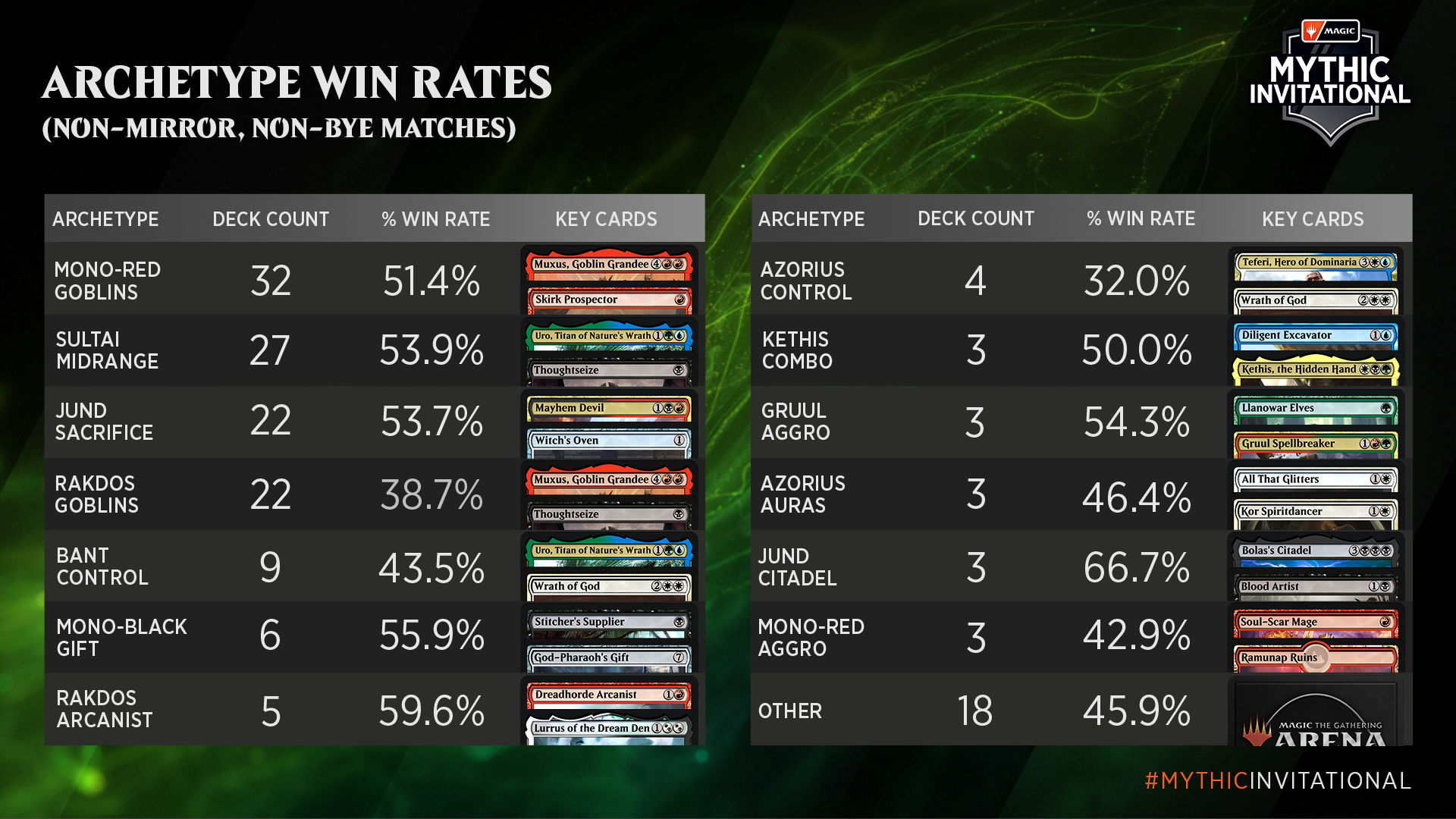 Jund Sacrifice put the most pilots into the Top 8, but it was actually Luis Salvatto's Rakdos Arcanist list that was the top archetype of the tournament. Three of the deck's five pilots made Day Two, and Salvatto cruised comfortably to the top seed.

That said, the variant of Sacrifice (Jund Citadel) was the best-performing deck with at least three players, headlined by Grzegorz Kowalski's Top 8 appearance. It's a small sample size of just three players to draw conclusions from, but it's a tantalizing direction to look after Kowalski showed the power of going big.

Where there's winners, there's also losers. It's clear that for the Mythic Invitational that Rakdos Goblins was a bad choice. may be one of the best cards in the format, but adding it to Goblins clearly disrupted what made the deck so effective ahead of the tournament. The single color gameplan of Mono-Red Goblins succeeded as Rakdos stumbled to winning just 39% of its matches. And even within Mono-Red Goblins, it was MPL player Ken Yukuhiro's tweak to the Mono-Red flavor that helped propel him to a Top 8 appearance.

Combo is an interesting wrinkle. There weren't many dedicated combo decks overall but Mono-Black should not be underestimated, particularly in the hands of Top 8 competitor Matt Nass.

What at first glance seems like a gimmick—filling the graveyard to activate to put the deck's namesake artifact into play—is actually the real deal. It's susceptible to encountering more graveyard hate in the future, but it was an excellent choice for the Mythic Invitational where were far fewer overall.

The 46% win rate for the "other" category is worth noting. Taken as a group, that's a better performance than several of the most popular archetypes, a rarity at this level of competition. It's a sign of a format still finding its way, and players like Christopher Leonard—he finished 11th with Mono-Green Planeswalkers, earning his way to the 2020 Season Grand Finals—were able to take advantage of it.

Only one champion, and one deck, will earn the first Historic title at the 2020 Mythic Invitational—and the world will be watching to see what happens next for the format.