It's almost here: the 2020 Mythic Invitational, featuring the debut of MTG Arena's Historic format at the Magic Esports stage, begins Thursday, September 10 at 9 a.m. PDT. Across 14 Swiss rounds and a Top 8 playoff, MPL players, Rivals league members, and other competitors will battle for $250,000 in prizes, 16 invitations to the 2020 Season Grand Finals, and the chance to shape the legacy of the Historic format for years to come.

In total, 160 decklists were submitted for the Mythic Invitational. Every decklist will be published at the beginning of the first round event Thursday, September 10 on the 2020 Mythic Invitational event page. The metagame breaks downs as follows. 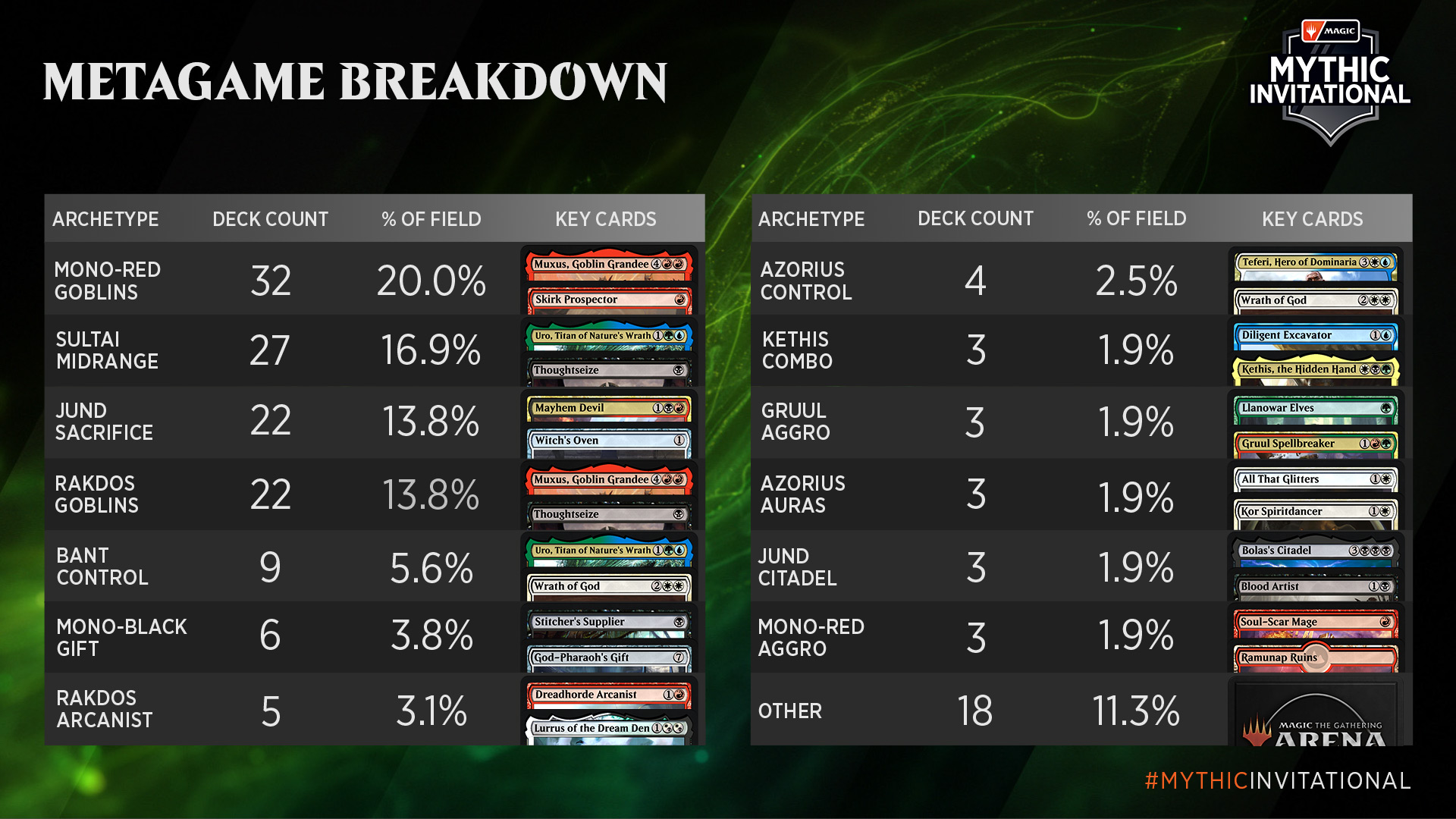 Without a doubt, the tournament-defining deck is Goblins. Combining Mono-Red and Rakdos variants, which are essentially the same except for a splash, roughly one-third of the field is trying to leverage the power of . With , it's possible to cast Muxus as early as turn three, and if you're lucky enough to hit both and , then you may be able to attack for lethal right away.

The core of the deck is well-established, but there are some differences across the final slots. Some players are rounding out their deck with , , and/or , whereas others included for even more explosiveness.

The 25 most-played cards among all main decks and sideboards break down as follows.

Of note is that and are the most-played gold cards; is seeing a lot of play as a legendary land because it is extremely powerful; and there is not a single white card to be seen. I'd have to make this table more than twice as large to reach the first white card: at 56 copies.

All decklists will be published at the 2020 Mythic Invitational event page at the beginning of Round 1 on Thursday, September 10.

For detailed descriptions and sample lists of the top six archetypes, I refer you to Mani Davoudi's excellent article highlighting the key decks of the format. The details provided by your Desk Expert for the Mythic Invitational closely match the actual metagame, even if Jund Citadel (which relies on the synergy between and ) largely morphed into Jund Sacrifice (which exploits and instead).

For reference, I provide a summary description of every archetype in one or two sentences below.

Mono-Red Goblins (32 players): Mono-Red Goblins, which encompasses one build that is all red main deck but that has a few blue counterspells in the sideboard, is the most-played deck in the field. Get ready to see the power of !

Sultai Midrange (27 players): In Standard, and are two of the strongest cards available. This strategy ports over to Historic quite nicely, especially when you can add and .

Jund Sacrifice (22 players): The synergy between , , and will be familiar to anyone who has played Standard over the past year. Mid-game staying power is provided by either or ; if there are any at all, then there are no more than two copies.

Rakdos Goblins (22 players): It's basically Mono-Red Goblins with , either main deck or sideboard. The splash is relatively pain-free, as , , and produce black mana without slowing you down.

Bant Control (9 players): , , and countermagic form the core of a traditional control strategy, with a green splash for and .

Mono-Black Gift (6 players): Exploiting and , this deck can activate as early as turn three, grab , and take over the game in a way that can't even be stopped by .

Rakdos Arcanist (5 players): This is arguably the best deck in the format because of the synergy with both and . This deck ups the discard angle with , which can be milled by or returned via or Lurrus of the Dream-Den.

Azorius Control (4 players): , , and form the core of a traditional control strategy, with as a typical win condition.

Kethis Combo (3 players): This intricate combo deck fills the graveyard with , activates , recasts a bunch of s, does it all over again, puts most of their deck into their graveyard, recasts all legendary cards, and then wins somehow.

Gruul Aggro (3 players): Gruul players are still smashing with , , and other big monsters. The strategy is supported by , which can put a lot of power onto the battlefield out of nowhere.

Azorius Auras (3 players): Suiting up with and allows you to attack with a 7/9 creature that keeps drawing cards. That's pretty sweet and, given all the protective spells in the deck, hard to beat.

Jund Citadel (3 players): Instead of a pure sacrifice angle with and , this deck aims to get onto the battlefield and potentially win on the same turn. can scry toward more spells to cast, while keeps your life total high enough to keep casting spells.

Rakdos Sacrifice (2 players): This deck relies on the synergy of , , and , supported by a consistent two-color mana base.

Temur Flash (2 players): This is a deck, supported by instants like and . will help keep Goblins under control.

Mono-Green Planeswalkers (2 players): A large number of ramp spells allow , , or to wreak havoc on the battlefield as early as turn three. The fun part is the sideboard, which is filled with one-ofs.

Temur Control (2 players): The plan is to control the game with and and eventually win with .

Golgari Citadel (1 player): It's Jund Citadel but with instead of to get a more consistent two-color mana-base.

Simic Ramp (1 player): This deck exploits , , and to ramp into a number of powerful colorless cards whose names all start with "U".

Abzan Gift (1 player): This deck is similar to Mono-Black Gift, but instead of filling the final slots with the likes of and , the deck is rounded out with , , and white utility creatures.

Bant Turbo-Fog (1 player): It looks like Bant Control, but it can stall the game even longer with and . No matter how many tokens has produced, they won't deal combat damage.

Sultai Flash (1 player): and are joined by .

Mono-Black Aggro (1 player): The aim is to curve into , , and and to turn these creatures sideways.

Jund Aggro (1 player): It's basically Gruul Aggro with a black splash for , who is of course happy to wield an .

Temur Midrange (1 player): This deck, featuring the best mid-sized creatures across three colors, can curve and into a turn-three .

Bant Spirits (1 player): The plan is to curve out with Spirits, attack in the air, and cast for and to boost your entire team.

Goblins is roughly one-third of the field, but there is a large diversity of archetypes ready to take on . The four-day 2020 Mythic Invitational live broadcast runs from Thursday, September 10 to Sunday, September 13, starting every day starting at 9 a.m. PDT on twitch.tv/magic. 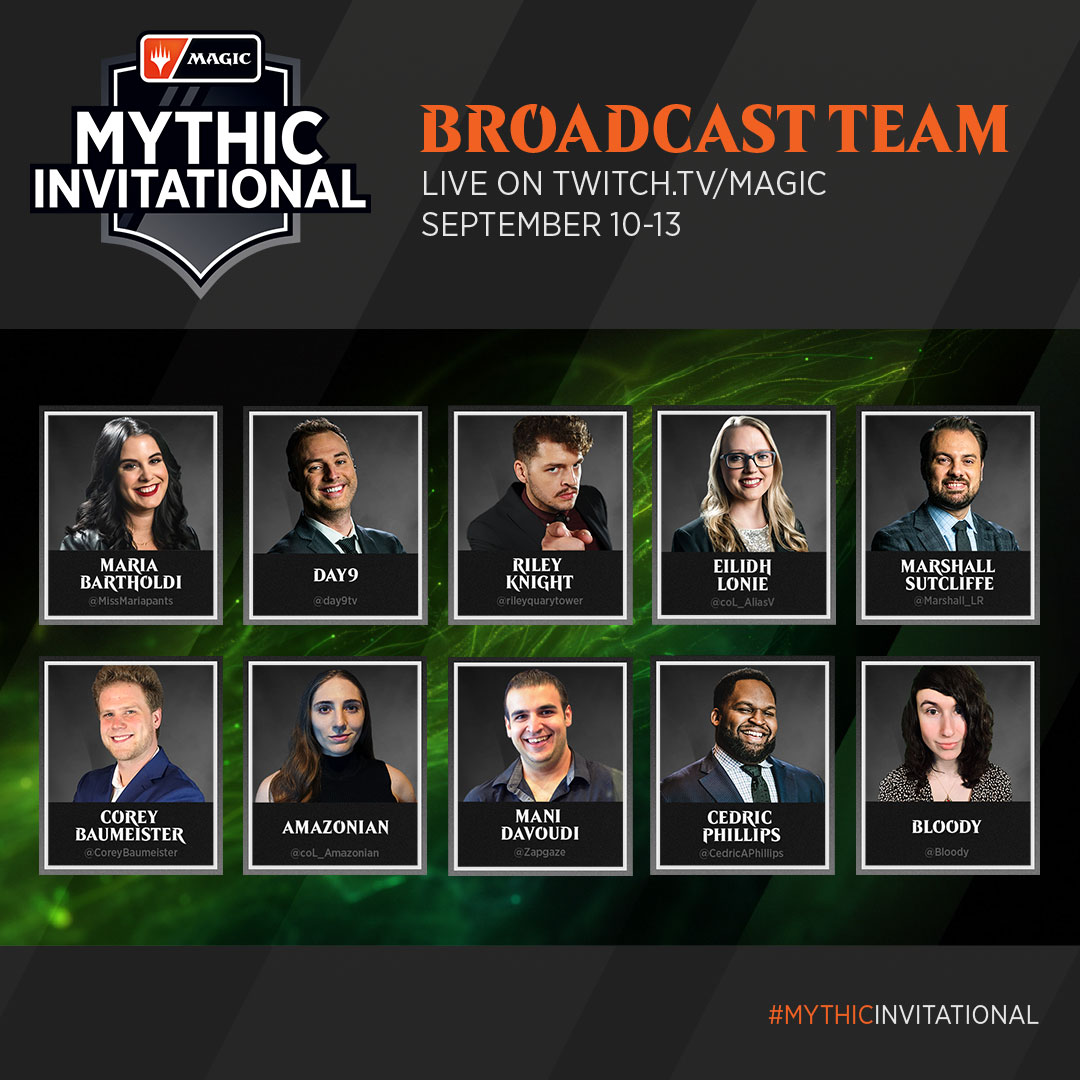 Catch it live to see the Magic Esports debut of MTG Arena's Historic format as the next champion is crowned!