After nine rounds of play on Day One at the Rivals and MPL Gauntlet, only one of the 48 players in the combined fields had secured a Top 8 spot: the legendary Kai Budde did so with an undefeated Friday run through the Rivals Gauntlet.

That meant that all Top 8 spots were open when the MPL Gauntlet resumed play. A three-round sprint would lead to the Top 8 for a final Standard showdown to determine the three players who would qualify for Magic World Championship XXVII.

The Top 8 of the MPL Gauntlet

After some tense play-in matches, the Top 8 was set:

For a "solved" metagame, the Top 8 was a very diverse bunch of decks, with five decks in the Top 8 and the breakout deck of the weekend, Jeskai Mutate, surprising many with its success this weekend.

The testing team clearly had gotten the best of the Standard field, and the biggest metagame storyline undoubtedly was Kumagai, Sato and Ikawa all making the Top 8 with the Jeskai Mutate brew that brought with it long combo turns and complicated sequencing to play optimally - especially a challenge given the lateness of the hour for the three playing from Japan.

Their mastery of the format had brought them to the Top 8, but would it convert into a spot at the World Championship? 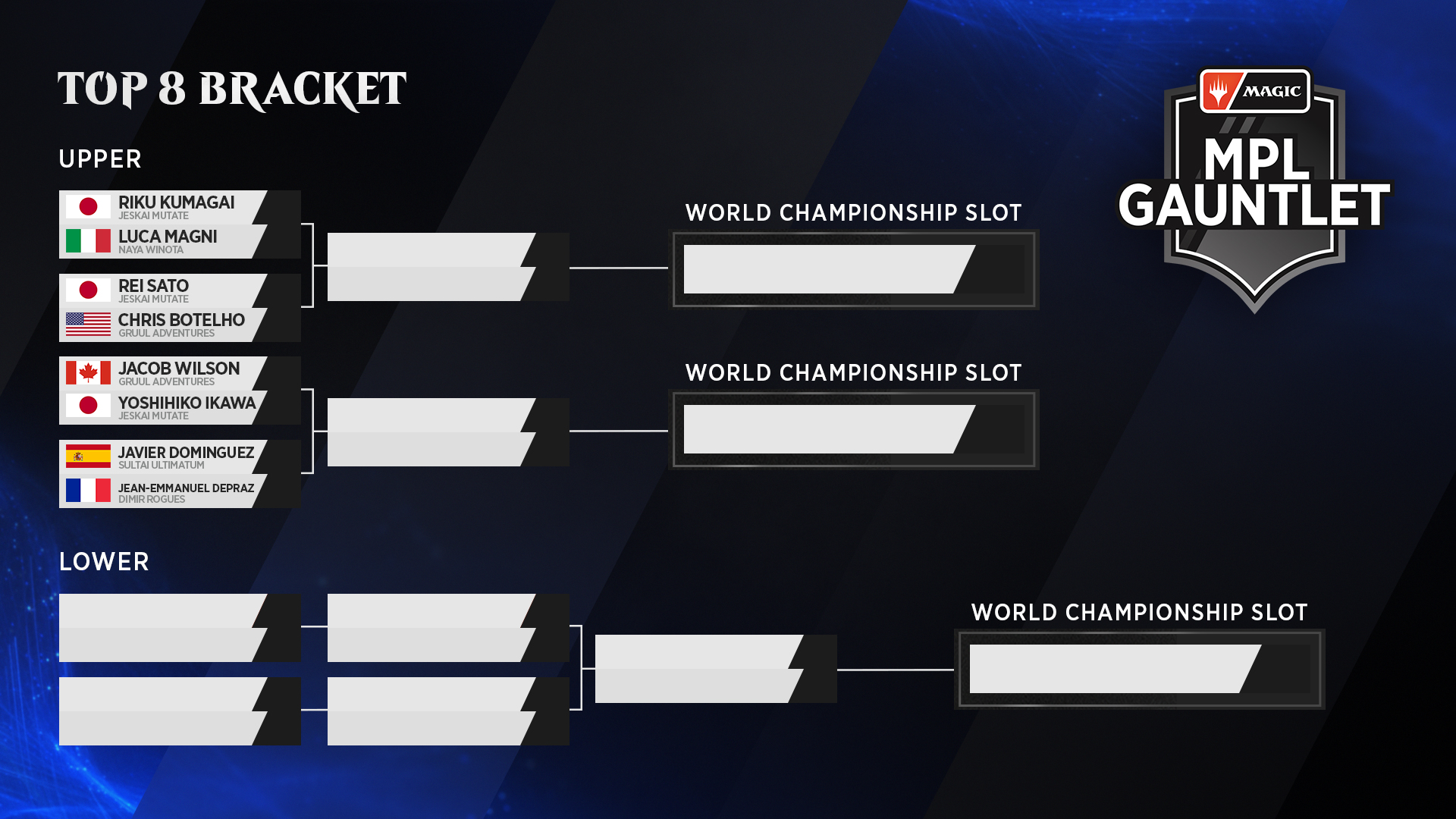 Magic has a history filled with legendary deckbuilding stories. From the earliest days of the game to the CawBlades of yesterday or the Kethis combo deck designed by the renowned "Czech House" of last year, the basic intrigue that brought so many players to professional Magic sometimes shines through: that anyone can win on any given weekend if they have the best deck and play it the best.

Sato, Ikawa and Kumagai's deck now joins those famous teams of Magic lore, as they dominated Top 8 play with the deck they brought that was one step ahead of everyone else.

The three Mutate players avoided being paired against each other in the first round, and that set the theme for the Top 8: would the breakout deck hold up in the Top 8?

In the other match, Jean-Emmanuel Depraz took Dimir Rouges to a 2-0 victory over Javier Dominguez's Sultai Ultimatum. That meant Kumagai and Sato would square off in the mirror with a seat at Magic World Championship XXVII on the line, while Ikawa would meet Depraz for the second spot.

There's nothing more you can ask for than to meet your teammate in the mirror deep into the Top 8, but that's exactly the dream Sato and Kumagai realized when they met in the first qualification match. The set went the distance, as Sato battled both Kumagai and his own dwindling clock late in Game 3, he was just able to complete his mutate loops onto and pull out the victory and complete his World Championship dream.

The other match pitted Ikawa against Depraz's Dimir Rogues, and the qualification match was one of the best of the entire tournament. After Ikawa took the opener, Depraz found himself behind on board against a giant , but he was ahead on one crucial resource: cards in the library. His triggers sealed the deck to even the set and unexpectedly forcing things into a decider.

The third game topped both that had come before - and even featured Jean-Emmanuel Depraz pulling off a critical bluff that could have sent Ikawa to Worlds on the spot.

It was an all-world play, and the mind games gave Depraz another draw step to try and find an answer. But when it failed it come, Yoshihiko Ikara became the second Jeskai Mutate player to earn their spot at the World Championship.

The emotional swings are real at the #MPLGauntlet!

"Three of our team members made it to the Top 4, and two players have won. I'm proud of it." - Rei Sato

Congratulations to @r_0310, our second player to earn a seat at the World Championship. 🎉🇯🇵 pic.twitter.com/XkweiwUcXC

With no more losses to give, every match in the lower bracket was an elimination match, and it began with a meeting of two ascending talents in Magic in Luca Magni and Chris Botelho. It was an aggressive showdown, and in three explosive games Magni's deck prevailed over Botelho's Gruul Adventures.

The second match pitted two players with all the experience in the world - and a bundle of Top Finishes - when Javier Dominguez eliminated Jacob WIlson.

That dropped the rest of the upper bracket down, and Depraz ran into Magni while Dominguez faced Kumagai. The latter was another classic, as the late-game power of the Sultai Ultimatum deck crashed into the near-infinite value piles that could accumulate as Kumagai stacked mutate creatures. In the end, it was Kumagai who emerged victorious, countering the Sultai Ultimatum to give the deck a sendoff from the Standard season.

The challenge to bounce back after losing a World Championship qualifier match is immense, but that's exactly what Kumagai had done - and Depraz showed the same resilience. He beat Magni and landed both Kumagai and Depraz in a familiar spot: playing for the World Championship. This time, there would be no second chances.

The final match showed off some of Standard's most engaging gameplay, as two very different decks faced off with Worlds on the line. While Kumagai tried to get a mutate chain going on a , Depraz was able to hang behind countermagic and flash creatures, playing Rogues to perfection to take the first game.

But Kumagai wasn't going out quietly. He fought back to win the second game, forcing a decider. And in that final match it was an absolutely ideal start for Depraz's Rogues: a pair to start attacking while keeping up countermagic to keep Kumagai from ever getting off the ground. It was exactly the kind of game Depraz needed to upset the Jeskai Mutate deck, and it sent him to the World Championship as the final MPL qualifier.

There's one more day left of Gauntlet play, and one more World Championship competitor to name. The Rivals Gauntlet returns at 9 a.m. PST Sunday, with the legendary Kai Budde having already locked up a Top 8 berth with a perfect run of Friday. That means there's seven Top 8 spots left to go, who will then battle it out for the single seat left at Magic World Championship XXVII.