The MPL Gauntlet and Rivals Gauntlet will unfold on September 3–5. For the 24 competitors in each event (who qualified via the MPL, Rivals League, or Challenger Gauntlet) it will be one of the most important tournaments they will ever play. After all, four invitations to Magic World Championship XXVII are on the line—three in the MPL Gauntlet; one in the Rivals Gauntlet.

The format for both the MPL Gauntlet and the Rivals Gauntlet is Standard. It's the last premier Standard event featuring Throne of Eldraine, Theros: Beyond Death, Ikoria: Lair of Behemoths, and Core Set 2021, so it'll be a proper goodbye to old favorites and tenacious staples right before rotation.

All decklists will be published on the MPL Gauntlet and Rivals Gauntlet event pages at the beginning of Round 1 on Friday, September 3, but today we can take a look at the metagame as a whole.

The metagame at the Rivals Gauntlet breaks down as follows. 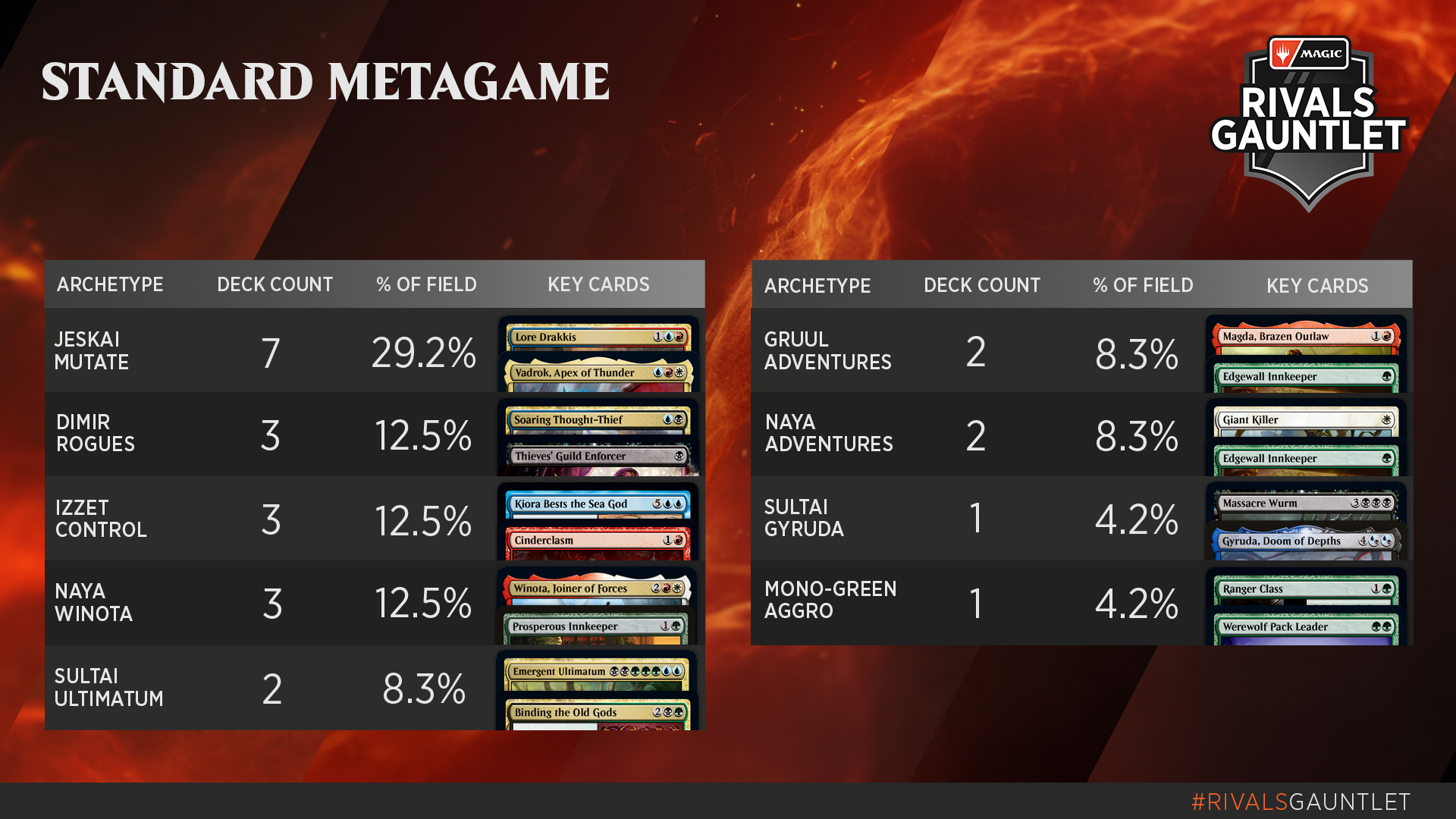 
I did not expect major Standard upheavals, but the Rivals Gauntlet still managed to surprise me.

First and foremost, Jeskai Mutate has returned with a vengeance. Featuring a five-card combo— + + + + is infinite mana when you keep targeting and bouncing your own —it is a rather complicated deck to pilot. Yet among Rivals Gauntlet competitors, there are several players who have experience with the deck dating back to the Strixhaven Championship. In total, seven of the twenty-four Rivals Gauntlet competitors (29.2%) opted for Jeskai Mutate.

The surprises don't stop at Jeskai Mutate. For example, one Dimir Rogues player replaced with , thereby enabling multiple main deck . This could give an edge against the green creature decks in the field, and it's nice to see that developments that go against conventional wisdom are still possible even late in a format.

Yet an edge could still be found. A team of six veterans—three from the Rivals Gauntlet; three from the MPL Gauntlet—innovated by adding as a companion. Going up to 80 cards does not come at a large cost for this archetype because the only four-ofs in Noriyuki Mori's original list were , , and . So by going up to 80 cards, you'll draw or the right colors of mana slightly less often, but the downside is small. Especially since 80 cards can be easily reached by turning three-ofs into four-ofs and by adding several and basics. In exchange, will help in long games, and blinking is particularly sweet.

While this is a nice innovation, in the Rivals Gauntlet it's all going to come down to your matchup against Jeskai Mutate, the most popular archetype. And I fear that Izzet Control lacks the answers needed in that matchup, as and can't singlehandedly break up a mutate stack. Still, we'll have to see how it plays out in practice.

The spiciest deck in the field, which surely no one was prepared for, is Sultai Gyruda. The game plan of this deck is to ramp into a turn-four or turn-five , hopefully putting onto the battlefield. This seems quite effective against green decks relying on , but it doesn't seem as great at disrupting or pressuring Jeskai Mutate, Izzet Control, or Sultai Ultimatum. Still, I'll be rooting for the rogue deck. 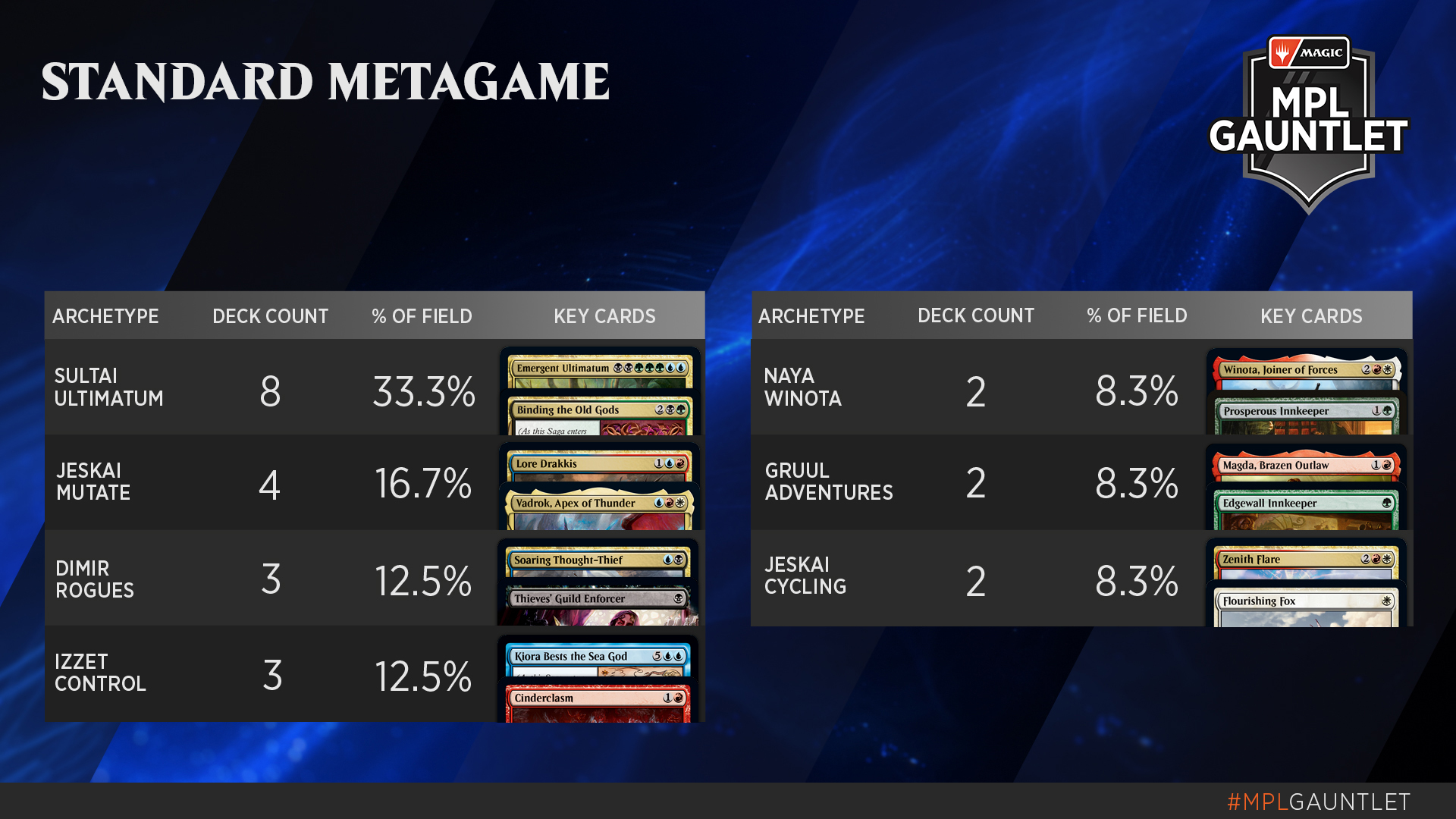 Instead, the most-popular archetype is Sultai Ultimatum. One-third of the players in the MPL Gauntlet chose this deck, a choice that one could describe as "conservative". Perhaps they are banking on the experience they've gotten with Sultai Ultimatum over the last year or so, or perhaps they simply liked the way the deck played. Regardless, even though the decklists didn't look particularly innovative, ramping into is still just as powerful as it always has been.

A final difference between the two gauntlets is that Jeskai Cycling, which was absent in the Rivals Gauntlet, is the deck of choice for two players in the MPL Gauntlet. In my experience, Jeskai Cycling has a positive matchup against Sultai Ultimatum, so it seems like a well-positioned choice for the MPL Gauntlet. In any case, matchups in Standard tend to be fairly close, so it'll all come down to execution—tactical sequencing, clever sideboarding, and optimal in-game decisions. With the field absolutely stacked with talent, matches are bound to be tight.

This weekend, the final four seats for the Magic World Championship XXVII will be claimed. To do so, the players can take advantage of all the Standard knowledge they've gathered over the past year, including all the matches they've played against longtime staples of the format.

The most-played nonland card across both events combined is , which will remain legal post-rotation. But (barring reprints) this weekend will be the last time on twitch.tv/magic that you get to see archetype- or format-defining cards like , , , , , , , , and in Standard.