After 145 players battled in Day One at the Players Tour Finals, 74 earned enough match points to come back for Day Two. After the first seven rounds of competition were absolutely dominated by Temur Reclamation, how would Day 2 shake out?

Here's how things looked moving from from Saturday to Sunday. 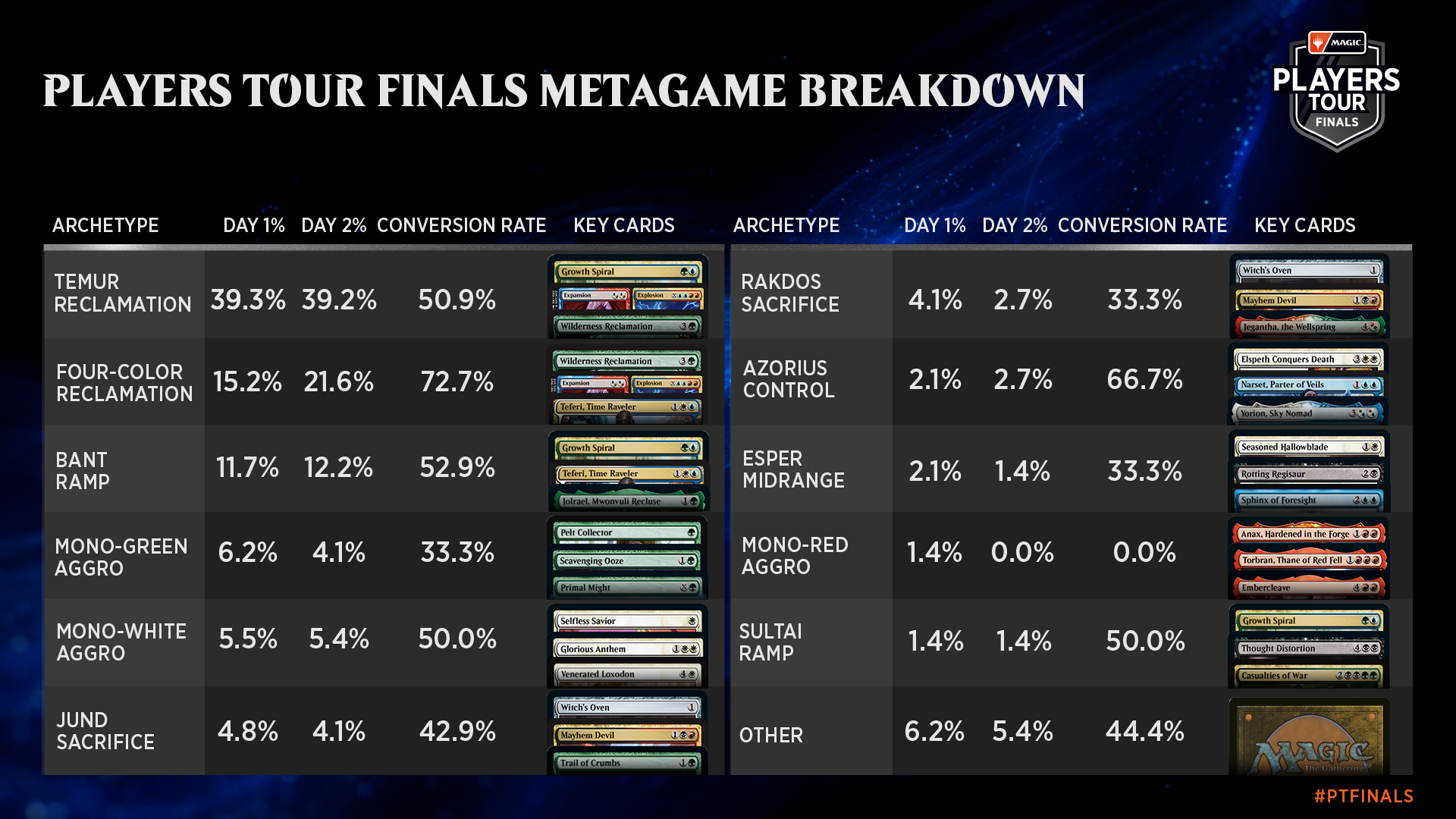 All About the Mirror

It should come as no surprise that a tournament filled with the best in the world piloting would come down to who could find an edge in the mirror. After seven rounds, it seems quite clear that the way to do so was with Four-Color , which leveraged access to white for cards like and to give opposing players fits.

The 73% conversion rate for Four-Color Reclamation was especially impressive in a tournament structure in which just under half of the competitors advanced to Day Two. The more traditional Temur Reclamation builds perfectly nearly exactly as expected and stayed constant at 39% of the field.

Core Set 2021 has been very good to fans of mono-white creature decks, and with the addition of , and , the classic archetype is suddenly viable again. The deck is extremely resilient to sweepers, and between , and , the deck's creatures get large in a hurry.

Half of the players on the deck advanced, outperforming both Mono-Green and Mono-Red Aggro.

At a high level, Standard has broken down into two opposites: aggro decks of various flavors trying to kill as fast as possible, and big-mana decks that seek to leverage either or ramp enablers like and (or both) to power out giant threats ahead of schedule.

In that context, it makes sense to see midrange decks like Jund and Rakdos Sacrifice struggle comparatively. Jund Sacrifice has moved to a endgame to try and keep up, but just five of the thirteen Sacrifice players in the field made it through Day One.

On the Ramp end of the spectrum, Bant Ramp performed about average, slightly increasing its metagame share from Day One to Day Two. Meanwhile, two of the three Azorius Control players also advanced to Day Two, with Hall of Famer Raphael Levy leading the way at 5-2. To the dismay of control deck fans everywhere, fellow French all-star and Magic Hall of Famer Gabriel Nassif—famous for playing the deck—was knocked out early on Day One.

The "Others" Doing Well

The often overlooked "Other" category of decks includes brews and one-ofs that don't fit anywhere else in an established metagame. In the Players Tour Finals, with such a clear set of top decks to attack, several players found success going rogue.

None more so than Michael Jacob, who finished at 6-1 as the only player to bring to battle. The longtime streamer wasn't afraid to take a risk in this tournament, and it paid off nicely on Day One.

Or maybe you prefer a little less combo in your beatdown deck? Look no further than Riku Kumagai, who made it to Day Two with Mono-Black Aggro.

also made an appearance, as Bolun Zhang included the villain in his Four-Color Planeswalker deck that advanced to Sunday.

And, of course, Magic Pro League member Ken Yukuhiro advanced to Day Two doing what he does best: winning with something nobody saw coming. If anyone is going to find success smashing together and , it would be Yukuhiro.

You can get a little more of Yukuhiro and the Esper Midrange story in the Players Tour Finals Day One highlights.