The format for all 14 Swiss rounds and the Top 8 is Standard. Let's take a look at the Standard metagame breakdown for this prestigious event. 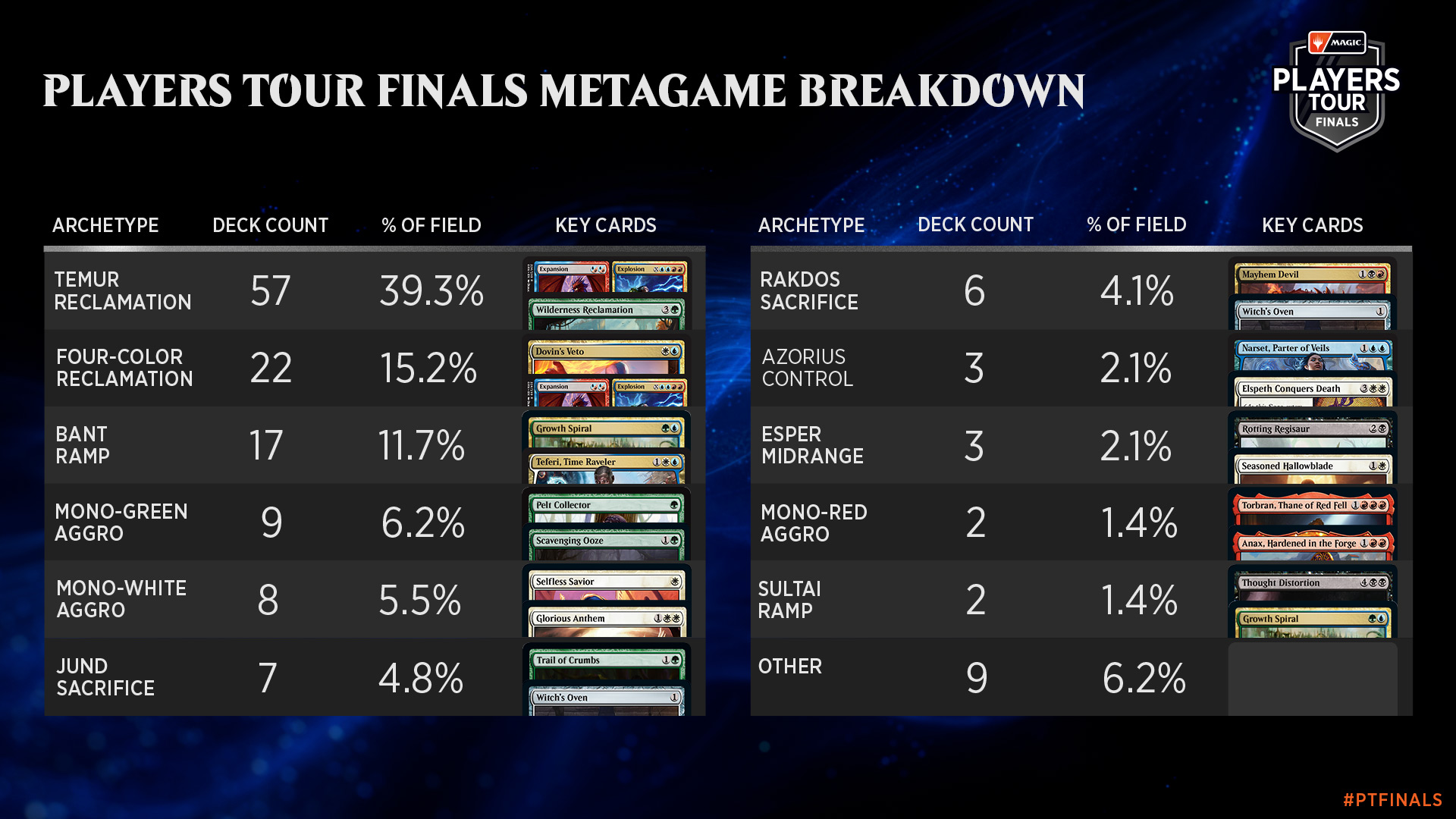 and strategies have been dominating Standard for months, so their enormous metagame shares did not come as a surprise. Combining Temur Reclamation and Four-Color Reclamation, 54.5% of the metagame is running . And if we add in Bant Ramp, Sultai Ramp, and Bant Flash, then a total of 68.3% of the field is running . These numbers show just how dominant these strategies are.

Compared to the Players Tour Online events held just over a month ago, the metagame is similar, but with even more Reclamation decks than before. Core Set 2021 added some new options, but the most common route to victory in Standard is still an enormous end-step Explosion.

So how were players planning to beat Temur Reclamation? Well, one way is via , which nullifies their countermagic and prevents them from casting those game-winning Explosions. Most Four-Color Reclamation and Bant Ramp players were happy to put four copies of Teferi in their decks.

Another approach was trying to go under Temur Reclamation with aggressive creatures. Mono-Green Aggro can come out of the gates quickly with , and it gained in Core Set 2021 as a solid two-drop that can answer in the mid-game.

But I'm even more excited by Mono-White Aggro, which didn't really exist in its current form before Core Set 2021.

Last weekend, the Red Bull Untapped International Qualifier #3 was won by Hoshi Yuki, who brought a Mono-White Aggro deck featuring 16 one-drop creatures, combined with , , and to boost them. He ran over Temur Reclamation all weekend, which must have inspired eight Players Tour Finals competitors to pick up the deck. It's the fifth-most played archetype at the Players Tour Finals and my personal favorite.

This deck can easily win on turn four or five, beating Reclamation players before they've had time to set up. Additionally, it dodges and , both of which are prevalent main deck inclusions. Meanwhile, is almost nowhere to be seen. As a result, Mono-White Aggro is well-positioned right now.

The deck also exploits the fact that most Temur Reclamation players have removed all red removal spells from their main decks, instead filling their flex slots with and . This provides them with an edge in the mirror match, which makes sense in the current Standard metagame, but it's also exploitable. Across all 57 Temur Reclamation lists, there's basically no removal at all main deck, apart from a few stray or . This was different at the Players Tour Online weekends just over a month ago, and it represents an opportunity that aggro players are now trying to take advantage of.

The question is: Can Temur Reclamation players swing their aggro matchups after sideboard? On average at the Players Tour Finals, a Temur Reclamation sideboard has about eight anti-aggro cards: 2.3 , 1.8 , 1.2 , 1.2 , 1.0 , and 0.7 . These are averages, and numbers differ across decklists, but the thing I want to point out that is played the least, despite being the most effective option against Mono-White Aggro.

and trade unfavorably against one-mana creatures; and fall to ; and is both slow and ineffective when most white creatures have a death trigger or a form of indestructability. To me, Mono-White Aggro looks well-positioned in this field, and I'm excited to see how it will perform at the big stage.

All Players Tour Finals decklists will be published on the Players Tour Finals event page at the beginning of Round 1 on Saturday, July 25. In the meantime, I can provide a quick description of every deck and highlight some of their Core Set 2021 additions.

Four-Color Reclamation (22 players): It's Temur Reclamation, but with and/or . Splashing white comes at the cost of a mana base that is less consistent and needs more tapped lands. This hurts against aggressive decks, but the powerful white cards should give an edge against Temur Reclamation.

Bant Ramp (17 players): This is the most popular deck without . and allow you to play the most powerful top-end threats in Standard ahead of the curve, and since they always draw a card, your mana accelerants are never dead in the late game. Some players slotted in Core Set 2021's , which is easy to trigger and adds some early board presence.

Mono-Green Aggro (9 players): This is the most popular aggro deck. and set up a quick clock, and is a nice Core Set 2021 addition that has already proven itself in Modern. Some players also included as a piece of interaction that can turn into a against creatureless opponents.

Mono-White Aggro (8 players): As I already explained, I am excited by the simple combination of one-drops and global boosts. This deck will beat down very hard and very fast, potentially topping Temur Reclamation as early as turn four or five.

Jund Sacrifice (7 players): The main sacrifice engine is plus . Once you add or , you're really doing it, and you should have no problem grinding out other creature decks. A few players added from Core Set 2021.

Rakdos Sacrifice (6 players): With and instead of and , as well as a smoother mana base, this deck can go faster, giving it an edge against Temur Reclamation compared to Jund Sacrifice.

Azorius Control (3 players): Control players are still saying "No." to spells with countermagic and "No." to creatures with removal. The most popular version relies on , along with enchantments and planeswalkers to blink for profit.

Esper Midrange (3 players): Three Japanese players registered a brew that is unlike anything I had seen before. It can curve out with into into , which most Temur Reclamation players lack proper answers to. Indeed, these creatures are not affected by , and they shrug off and . Esper Midrange also features interactive cards like and , so I can only hope that this brew might indeed be the Temur Reclamation killer that we're hoping for.

Sultai Ramp (2 players): If you don't want to splash white in your deck, then you can lean into black for cards like , , and .

Mono-Red Aggro (2 players): Curving out with aggressive red creatures and boosting them with or is still a solid plan.

Bant Flash (1 player): When you hold four mana up on turn four, your opponent never knows whether to play around or . The white splash unlocks , which can bounce for value.

Four-Color Yorion (1 player): Main deck can blink and other permanents for value. Green is for .

Rakdos Knights (1 player): helps cast on turn one and on turn four. If the equipment is successfully attached to , it's usually game over.

Four-Color Planeswalkers (1 player): It's always nice to see , this time in a control shell that splashes for . The mana base is tied together by .

Sultai Graveyard (1 player): This is a spicy choice made possible by from Core Set 2021. You mill yourself with and the adventure part of , cast , gain 3 life, and bring back for free.

Esper Doom (1 player): It's basically an Esper Control deck that can generate value by sacrificing enchantments like to and then bringing them back with .

Mono-Black Aggro (1 player): I was expecting to tell you how good it feels to slap on , but this specific list plays neither of these cards. There's still an aggressive curve of black creatures, but , , and fill out the deck instead.

Esper Rats (1 player): It's basically the Orzhov Yorion deck that broke out in the last Players Tour Online weekend, but with a blue splash for—you guessed it—. Okay, there are a few other blue cards as well.

Mardu Winota (1 player): This deck goes wide with and to get multiple triggers from . Core Set 2021 added a lot: There's to trigger and protect Winota, as well as and to hit with Winota. This is yet another deck that I'd be excited to watch.

The Players Tour Finals live broadcast on twitch.tv/magic starts both Saturday, July 25 and Sunday, July 26 at 9 a.m. PDT. Tune in to see if Mono-White Aggro can triumph over all the decks, to see if this cool Esper Midrange deck can beat Temur Reclamation, and 145 of the best players in the world battle for $250,000 in prizes!