From a field of 192, 66 players returned for the final day of competition here in Nagoya. It was a big day for them, and also for the Dimir Inverter of Truth deck that was the most popular on Day One. Tay Jun Hao of Singapore started the day off perfectly, and in doing so he became the lone 6-0 drafter in the tournament—a fantastic achievement.

Once Pioneer began, it was an epic race for the Top 8 slots. Shintaro Ishimura and Yuta Takahashi made it with two rounds to spare. Soon after, they were joined by Ken Yukuhiro and Shota Yasooka. That left a final round where all the favorites won, creating a truly stellar Top 8, as we shall see: 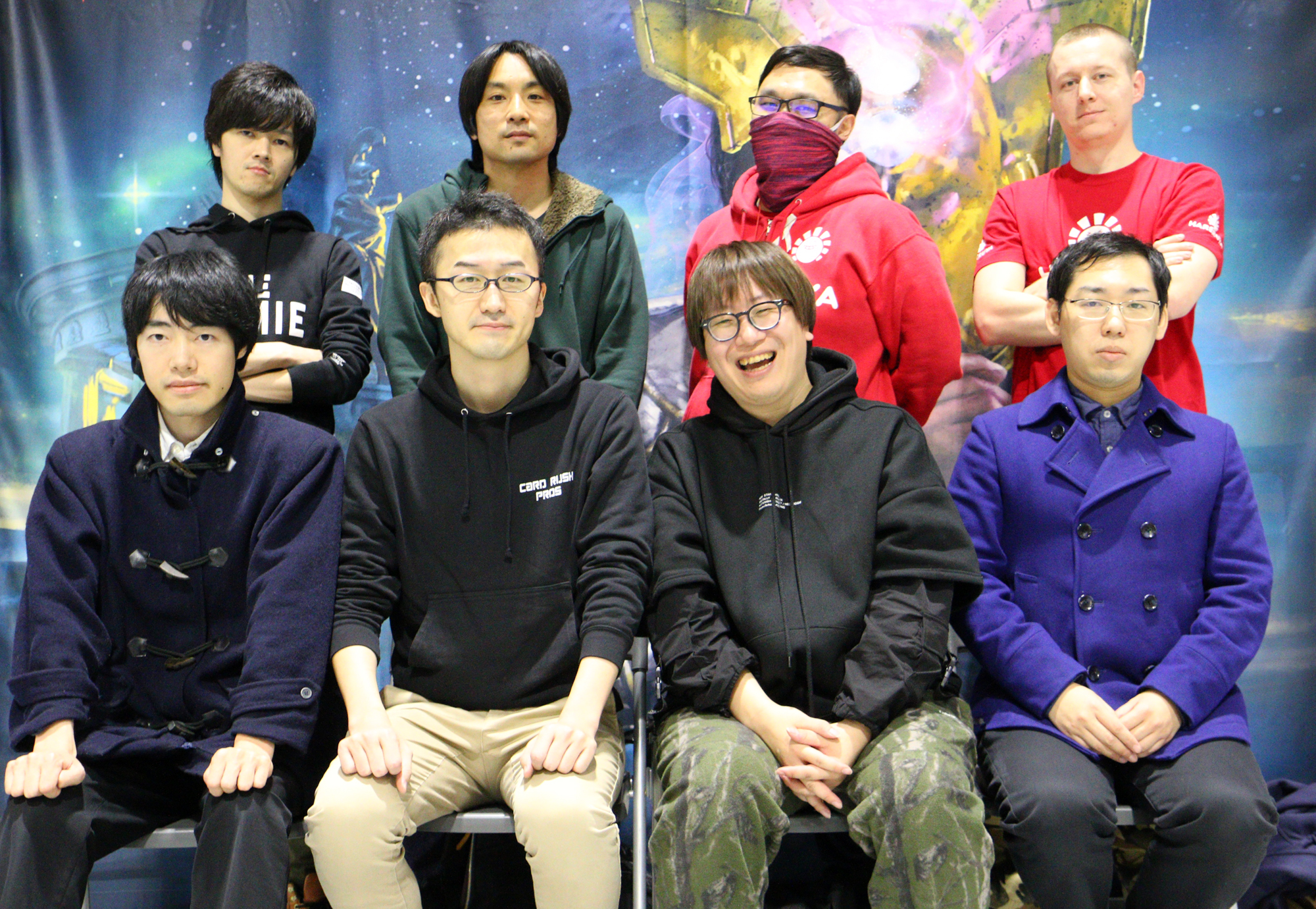 This tournament was about more than a Top 8, however. It was an opportunity for players to qualify for the next set of Players Tour events, and advance to the Players Tour Finals. Finishing 9th through 12th, Ken'Ichirou Omori, Michael Collins, Tzu-Ching Kuo, and Kensuke Kato make it through to the Finals, while another ten get another chance at the Players Tour next season, including Tay Jun Hao of Singapore, Australians James Wilks and Nicolas Messel, and Christian Calcano, who made the most of his trip from USA.

The MPL and Rivals

So who were the Top 8, and what decks were they playing? First, the raw facts:

A scan over the Top 8 decklists for Players Tour Nagoya tells you the story.

Whatever way you slice it, that's a phenomenal performance from the decks. As we'll see, Asahara had a different take on the archetype, but the dominance shown has been startling. From 19% of the field on Day One, to 29% on Day 2, to 4/5 of the Top 8, Inverter is definitively the deck of the tournament.

Here's how the bracket started out: 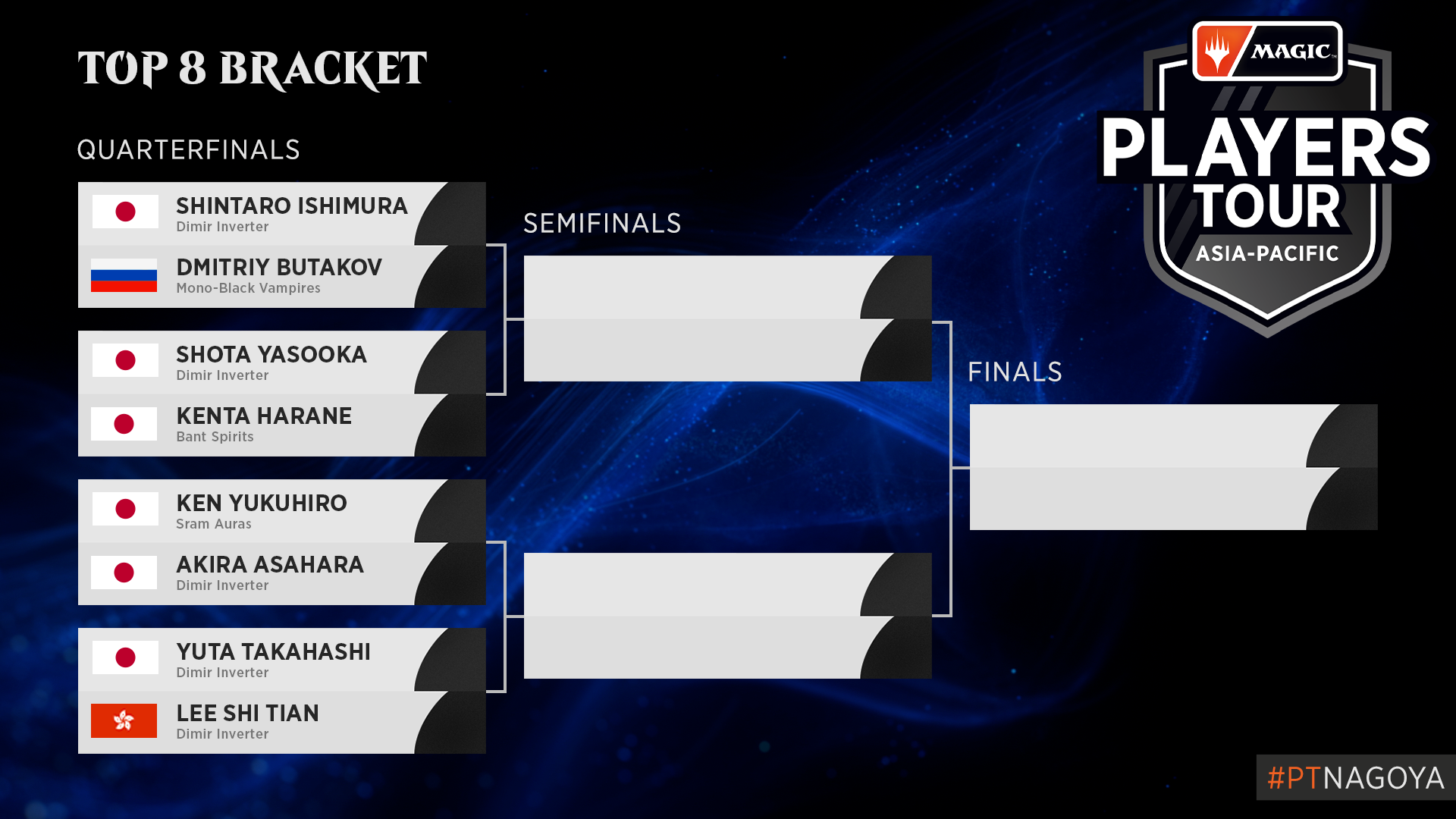 The No. 1 seed was Ishimura, who made his run to the Top 8 off the back of a perfect 6-0 start in Pioneer on Day One. Known as "rizer" on Magic Online, his headline paper finish came when reaching the Top 8 of Pro Tour Paris 2011. His opponent was 8th seed Dmitriy Butakov, one of the few Europeans who had chosen the Asia-Pacific Players Tour as their target. A 7-2 record with Mono-Black Vampires had seen Butakov edge through the elimination rounds. No stranger to the big stage, Butakov had claimed victory as the Magic Online Champion not once, but twice.

The second Dimir Inverter deck was piloted by Magic Hall of Famer Shota Yasooka. Unsurprisingly to those who have watched Yasooka over many years, his take on the archetype allowed him to become a full-on control deck after the first game in a match. Across the table sat Kenta Harane, former Japan National Champion, and subsequent World Magic Cup Champion too, leading the Japanese team to victory. Harane was on Bant Spirits, essentially a white-blue deck, Harane added green for exactly two unique cards. But what cards— and .

For deckbuilding afficianados, this was the one to watch. Yukuhiro has been coming to the biggest tournaments around the world for many years, and is one of the first go-to decklists to see if there's anything unusual brewing. Yet again there was, as his Sram Auras deck—which tops out at a mighty two mana—was the talk of the tournament. As for Inverter deck number three, that was in the hands of 2008 Magic World Championship Top 8 competitor Akira Asahara. Playing Magic for years, Asahara would bring a ton of experience to the table.

That left the all-Inverter matchup. Yuta Takahashi has won multiple high-level tournaments with Faeries, so a blue-black deck was firmly in his wheelhouse. As for MPL member Lee Shi Tian, he has built his reputation on excellence in Modern, in a career that led to his induction into the Hall of Fame in 2018. Like many of the Dimir Inverter mirrors this weekend, this one was shaping up to be extraordinarily tricky to navigate.

Matchup Moments from the Top 8

First through to the Semifinals was Shintaro Ishimura, who dispatched Dmitriy Butakov 2-0 in short order. Butakov was far from disappointed, though. As he explained he expected to finish in 9th, and only made it into Top 8 when a Round 15 match ended with an unexpected draw.

Kenta Harane took his Bant Spirits into action against Shota Yasooka, a matchup he thought was potentially very bad, owing to Yasooka being able to switch from a nominally pure Dimir Inverter deck into a rock-solid control deck. Yasooka? Control? Indeed that's hard to imagine. In their event, a tight match went the way of Harane 2-1.

Things didn't start well for Ken Yukuhiro, with a mulligan to five against Akira Asahara. Yukuhiro's deck could recover, and into was an ideal start. Asahara's wasn't ideal, however, and it was quickly 1-0 Asahara. Yukuhiro quickly equalized on the back of , which Asahara knew about but ultimately couldn't contain. was pivotal in the deciding match, too. Yukuhiro held it up as long as possible, before finally countering a . He still needed a off the top, but that was enough taking Yukuhiro through to the Semifinals.

That left the Dimir Inverter mirror between Lee Shi Tian and Yuta Takahashi. The Japanese player took the opener on the back of and the eponymous . Both players reduced their libraries to almost nothing in Game 2, before forced a deciding game. Unfortunately, that was as good as it got for the MPL Hall of Famer. Lee endured turn after turn on just two land, enforced in part by neat play from Takahashi, and by the time he drew another land it was far too late—Takahashi completed the semifinal lineup.

Both Semifinals were done in short order. You'd be correct in assuming that meant a win for Ken Yukuhiro and his Sram Auras deck, 2-0 over Yuta Takahashi. Perhaps more surprising was the speed with which Kenta Harane advanced to the Finals as well, finally ending the run of the number one seed, Shintaro Ishimura. In a tournament dominated by , it would be an unexpected Finals matchup.

The first game was blisteringly quick. into into was a routine start for Yukuhiro, followed up by , plus two Auras, refilling his hand. To be fair, Harane put up some defiance in the face of this aggression, with , , —none of it mattered. What did matter was Harane's opening to Game 2, with a from the sideboard. Unexpectedly, Yukuhiro found himself well and truly on the back foot, facing the Mass, , and . quickly ensured a deciding Game 3.

That last game was a good one. Since has lifegain Yukuhiro was able to establish a commanding lead, at one point reaching totals of 31-7 in his favor. It was fitting, however, that the key green card in Harane's deck, , showed up: Finding and was the turning point. With now on the battlefield, Harane was able to routinely tap down Yukuhiro's largest threat—this deck is "Auras" but not Modern Bogles, and the lack of hexproof showed at the last. Harane continued to build his board, and within a couple more turns had assembled a trophy-winning airforce that made him the first champion of Players Tour Asia-Pacific.

Thanks to our outstanding Japanese Coverage friends and interpreters, I was able to sit down with Kenta for a chat after his victory.

Kenta, congratulations. You've won a Japan Nationals title, and now a Players Tour. How do they compare?

"Two titles is very exciting! However, the Players Tour title is more special than my national title, because Asia-Pacific is a bigger tournament. In the Swiss rounds I played players like Tzu-Ching Kuo and Kelvin Chew—players from across the region."

"It has a good position in Pioneer right now because the weakness is Mono-Red, but Inverter decks and Mono-White Devotion beat the Mono Red decks so having not much Red is good for me."

How important is , the only green card in your main deck?

"White-Blue Spirits has , but it's a big risk because although it's good in aggro it isn't good in a defensive deck. But with , I can recover from a slow start and I'm not all-in on the aggro plan."

"Ten times I was on the draw during the Swiss. With white-blue that's a big disadvantage, but with Bant Spirits I can win!"

Day Two, and especially the Top 8, was full of Dimir Inverter decks. How is that matchup for you?

"50/50. However, Shota's Inverter deck can become a control deck and that's bad for me. I was very lucky—he cast a and found four lands, an , and two more —with no graveyard!"

In the end you faced Ken Yukuhiro in the Finals. Tell us about Yukuhiro, as a player and deckbuilder.

"Ken's skill is very high as a player. As a deckbuilder, he's really necessary in Team Musashi. That said, I'd never playtested against Ken's deck! I didn't know what Ken was going to do, so I had to learn during the game."

The Players Tour continues next weekend. Is your deck a good choice for Phoenix?

"Some players will likely choose it next weekend. But whether it's a good choice—I don't know. If people play Mono-Red it's very easy to lose."

Temporally speaking, as of this interview, the Top 8 of Players Tour Brussels is still playing right now. So, what does it mean to be the first ever Players Tour champion?

Again, congratulations, and we'll see you at the Players Tour Finals in Houston. 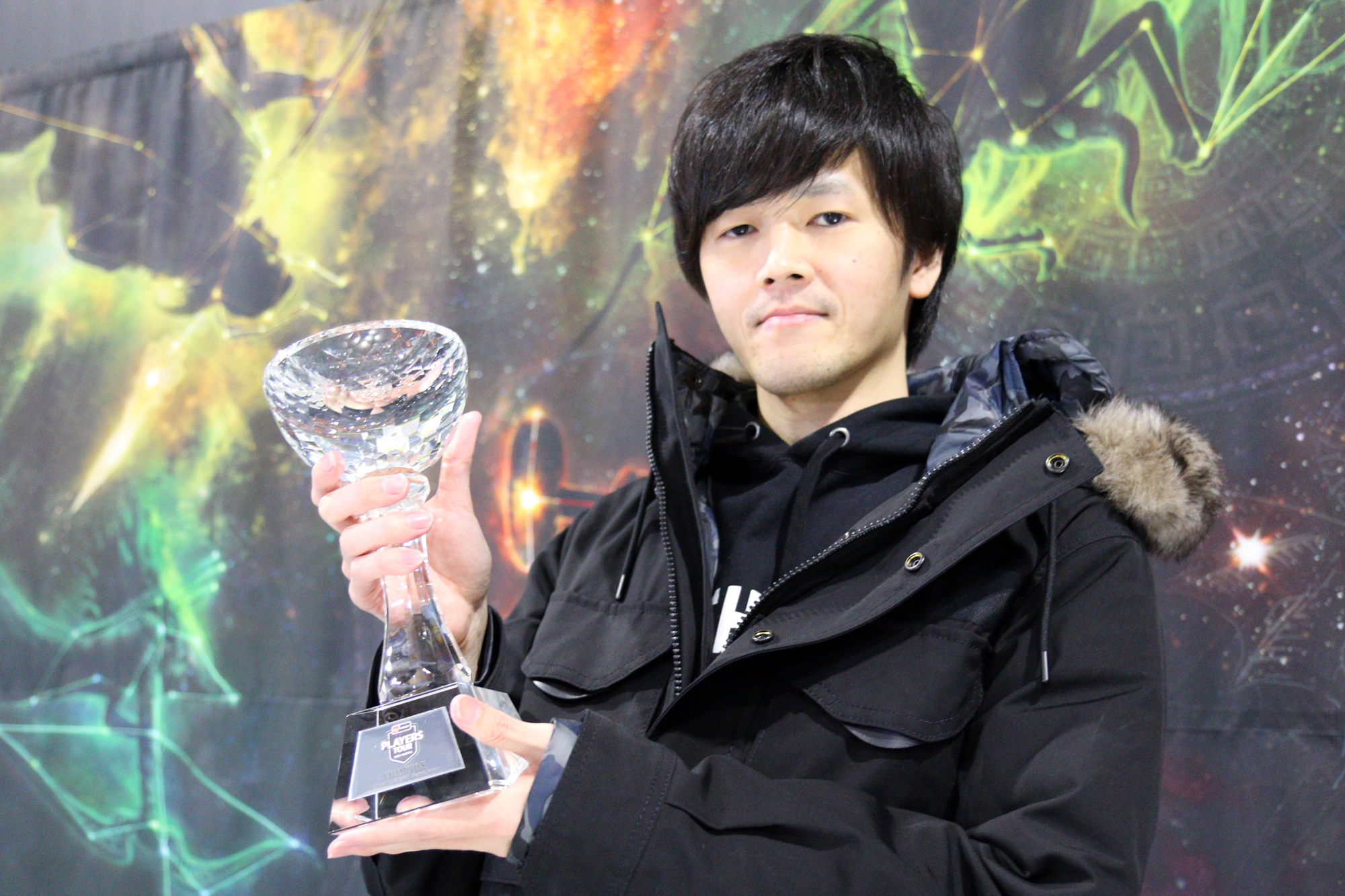 And, of course, we'll see all of you at the Players Tour Finals in Houston, too. Congratulations again to Kenta Harane, your Players Tour Nagoya champion!