2020 is a challenging year, for Magic and Magic esports. COVID-19 has fundamentally disrupted the notion of gathering in large numbers with players traveling around the world to celebrate Magic. We, like all of you, never planned on 2020 being filled which such change and uncertainty. However, our top priority has and always will be the safety and wellbeing of our competitors, staff, and fans.

With that in mind, we have had to revamp our plans to conclude the 2020 Partial Season, and what it means for upcoming events this year.

While hard to accept, the reality is clear: The future of in-person gatherings is uncertain and likely to remain that way for some time. A new plan is needed, one that works within current constraints to close out a completely disrupted season while providing hundreds of competitors with existing qualifications an opportunity to compete.

We are shifting our 2020 Partial Season competitions from in-person destinations to online events, played remotely through MTG Arena. This includes the following:

These events now follow a new schedule of days, with updated prize pools:

We're are also adding an entirely new event, the 2020 Season Grand Finals. This will take place in the fall after the release of Zendikar Rising, with the Top 16 from both the Players Tour Finals and Mythic Invitational qualifying for this exclusive $250,000 prize pool event. 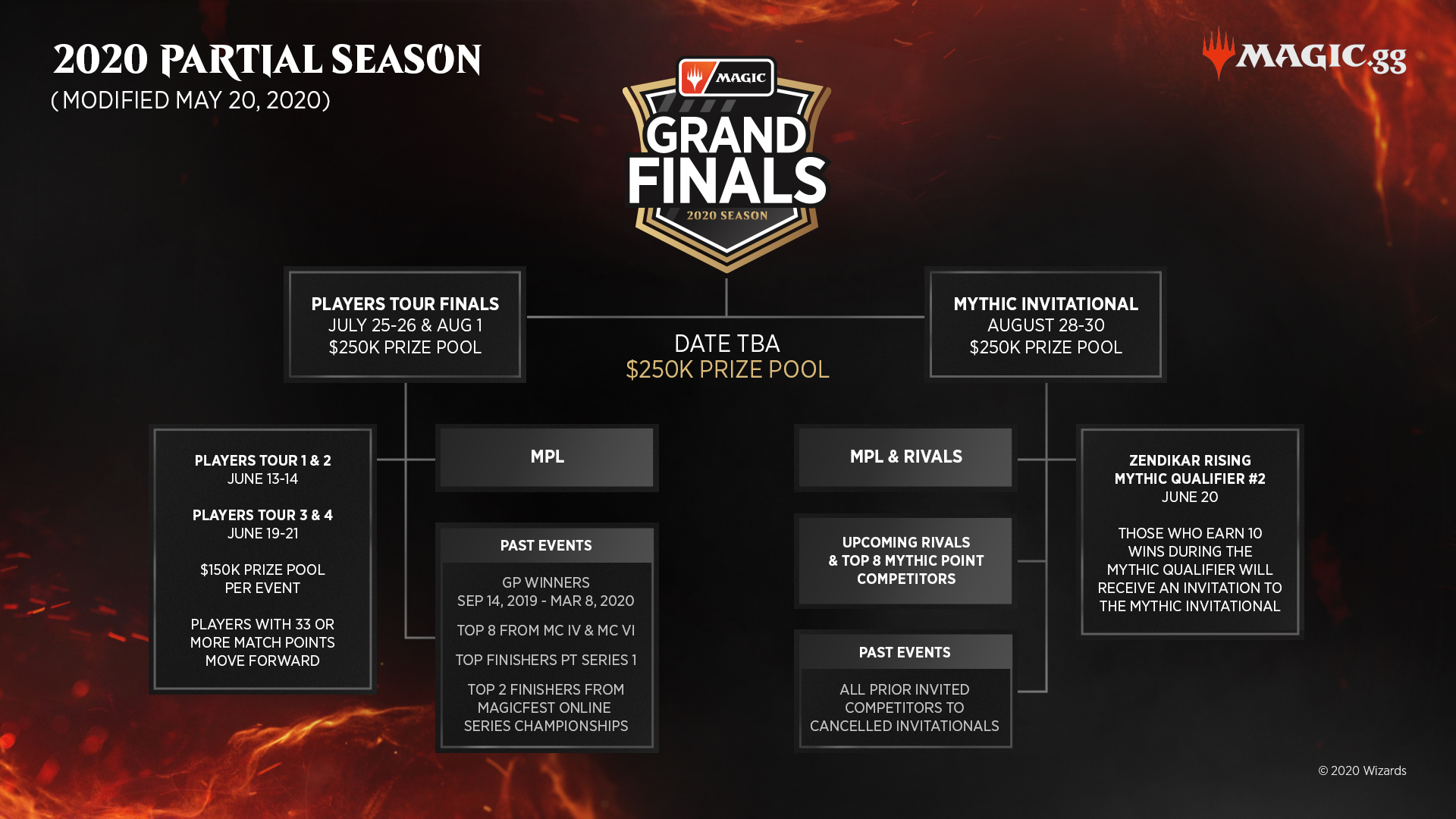 Beyond The 2020 Partial Season

As we conclude the 2020 Partial Season and provide closure to Magic Esports' most challenging season, our focus will shift to shorter length seasons with a structure that provides more flexibility so we can quickly pivot and adapt in the current global landscape. These events reflect our path forward, opening new opportunities for competitive Magic to continue. We'll share more about these future opportunities in the coming weeks.

These plans are our first steps forward in an uncertain world, and we look forward to a time when we can all gather and shuffle up with the friends that we've made around the world when it is safe to do so.

Previously scheduled events have been updated to new events with online play through MTG Arena, including:

All outstanding and to-be-determined invitations for these events now qualify players for the appropriate events announced here, and cannot be deferred to another event.

There are four (4) tournaments. Qualified players can play in only one (1) of their choosing beginning at the following dates and times:

Each Players Tour event will use the following structure:

The Players Tour Finals will use the following structure:

The Top 16 players will qualify for the 2020 Season Grand Finals (below).

The Mythic Invitational will use the following structure:

The Top 16 players will qualify for the 2020 Season Grand Finals (below).

The tournament structure for the 2020 Season Grand Finals will be announced at a later date.

When will Wizards of the Coast's tabletop Magic events be scheduled again? Why don't you just pause everything and resume when COVID-19 is over?

The short answer: we don't know.

Our priority in these extraordinary times is the health and safety of players, artists, vendors, staff, and fans. While we share in the extraordinary sadness felt by our players and fans, we can't predict when it will be safe to resume the large-scale gatherings. For this reason, we are choosing to hold replacement events online over the next few months. The alternative was waiting indefinitely for the world to return to normal, with no guarantee that the new normal would even allow our old systems to exist.

We look forward to a time when we can all gather and shuffle up with the friends that we've made around the world when it is safe to do so.

Where do I go if I'm unsure if I'm qualified for one of these events?

The invitation list for the Players Tour events is updated as of this announcement and will be updated regularly as remaining qualifications are earned. Invitation lists for Players Tour Finals, Mythic Invitational, and 2020 Season Championship will be shared closer to these events respectively.

If you have any questions about an invitation you have or believe you have, please contact us at esports@wizards.com.

How do I earn Mythic Points?

All players who already earned a fractional invite to a Players Tour will have that invitation honored for the Players Tour events announced here. Like other systems designed for competitors to participate in across our originally planned season, without events to qualify for this system is being suspended. We understand the value and support players enjoyed with fractional invites and will consider revisiting this system in the future.

When will complete prize and tournament details be available?

We will announce complete prizes, as well as additional tournament details, closer to each event beginning with the upcoming online Players Tour events.

Will there be additional events to qualify for and compete in? Will those events have cash prizes as well?

We will continue to support partners launching new and innovative online Magic competitions that award cash prizes, such as Red Bull Untapped and those offered by ChannelFireball Events. We will also announce new, future Magic esports events—and their qualification paths—in the coming weeks.

Will I be provided a "fully stocked" MTG Arena account to use in these events? What if I do not have the cards in my account that I want to use for my deck?

Players competing in the June Players Tour events will be provided access to an account on MTG Arena to use for preparation in advance of, and participation in, the event. Players competing in the Players Tour Finals and Mythic Invitational, as with Mythic Qualifiers and other online events, will use their personal MTG Arena account to compete. Decklists submitted will require those cards to be available in the account of the player competing. Using an incorrect or different deck than the one submitted will be penalized according to tournament policy.

If I win or do very well in the 2020 Season Championship, do I qualify for a future event?

The events announced today—the Players Tour, Players Tour Finals, Mythic Invitational, and the 2020 Season Championship—are the conclusion to the 2020 Partial Season. Events in the future, which begin with fresh paths, will be announced on their own.

Due to extenuating circumstances I cannot participate in an event I am qualified for. Can I defer or extend my invitation to another event in the future?

While we are empathetic to difficulties competing in these events caused by both these changes and the effects of COVID-19, we unfortunately cannot defer to extend invitations because we simply do not know when tabletop events will resume or what they will look like as they begin again. Going forward, Magic esports, like many other events and industries, has been forced to adapt to a new normal, and will very likely look different than what we originally planned for in 2020. For these reasons we are unable to accommodate any deferrals. Please contact us at esports@wizards.com if you have more specific questions about your invitation.

Why was the prize money reduced from the $750,000 originally advertised for the Mythic Invitational?

Ensuring we can include as many competitors as possible, many playing from different regions globally, required us to reassess all our event details including prizes. These changes enable us to add the additional 2020 Season Grand Finals as an exclusive event for top-finishing players from the Players Tour Finals and Mythic Invitational.

What happens to the Magic Pro League and Magic Rivals League?

As previously announced in our recent Esports Update, Magic Pro League and Magic Rivals League rosters will remain in place from the 2020 Partial Season, so players currently at MPL or Rivals status will be invited to begin next season with that status.

From MTG Arena, we will invite the top seven Mythic Point earning players who are already not a member of the MPL or Rivals League. These Mythic Points include both those already earned, plus those earned in the June 2020 Mythic Qualifier.