Today we're excited to share two announcements, the first with our plans for the 2020-2021 season of events and the second outlining the Magic Pro League and Magic Rivals League structure and your pathway to join them.

There's a lot we're sharing in this announcement. Whether you're new to Magic Esports or returning to see your next steps, many familiar systems and paths through competition remain.

While the global pandemic has closed off traditional pathways for competitive tabletop Magic, it's important to emphasize that the structures we're announcing today are designed to address the current challenges we all face and will continue to evolve.

The 2020-2021 Magic Esports season is composed of three splits, which are several months of competitive play tied to an upcoming set release. Each split is a three-step qualification progression leading all the way to that split's Championship. This is how the first of these three splits—the Zendikar Rising Split—will work. 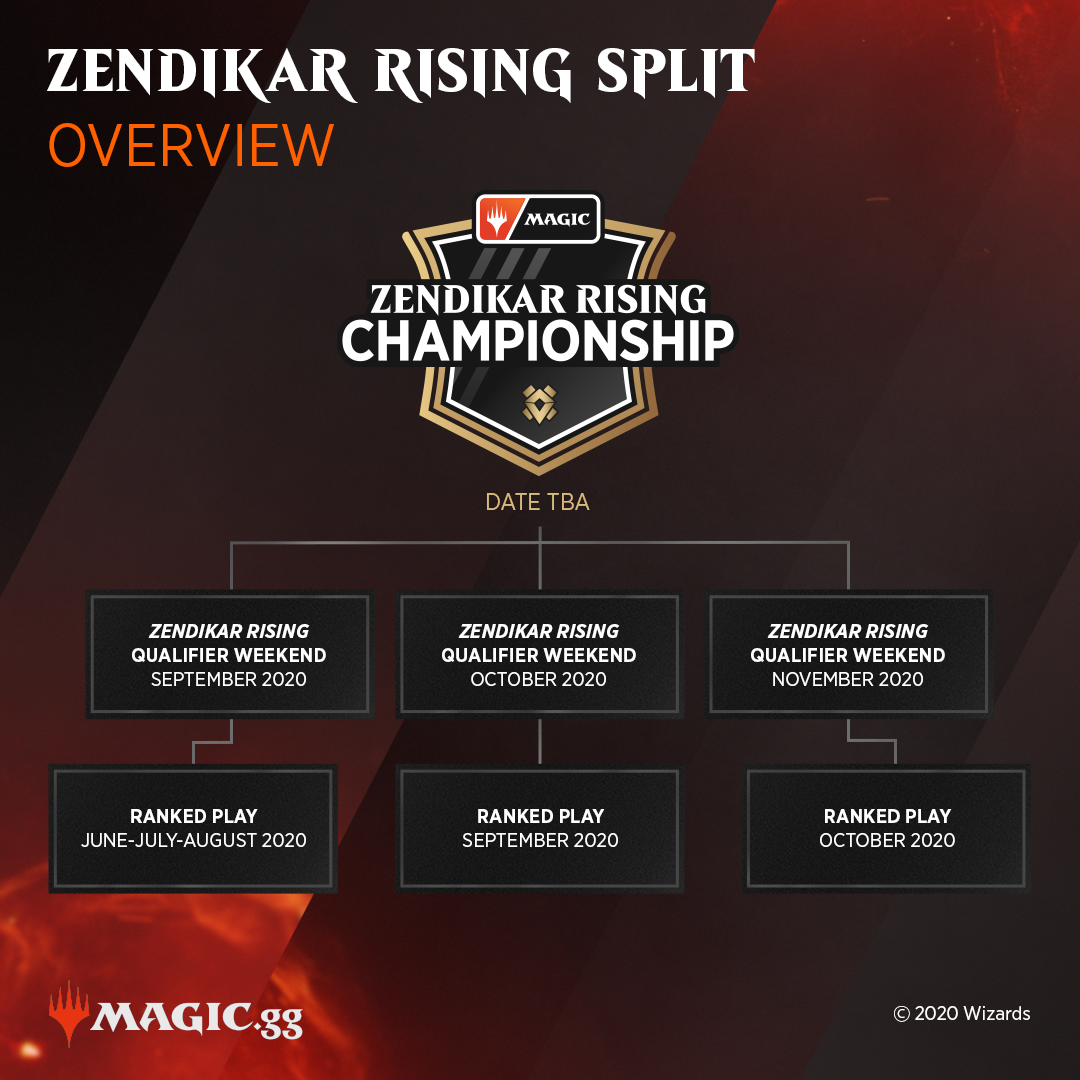 In addition to monthly Ranked Play on MTG Arena, we'll continue to offer qualification opportunities through previous competitive success, Magic Online Qualifiers, and events supported by partners. We have more detail to share about Zendikar Rising Split qualification paths below.

The following splits of the 2020-2021 season will be structured similarly, recognizing the need to continue making adjustments based on what we learn throughout the Zendikar Rising Split.

Specifically, we've also structured the season to allow us the flexibility to add tabletop opportunities. Only as it becomes safe to do so, we'll begin to add qualification paths starting with local game stores and building over time to larger regional events. Given the instability driven by the pandemic we don't know when we'll be able to offer these opportunities, but we share your desire for tabletop play.

Monthly Ranked Seasons on MTG Arena allows competitors to unlock invitation to Qualifier Weekends and beyond by finishing in the top 1,200 of Mythic ranking each month. Every month offers a fresh opportunity for players to start their Magic Esports journey. 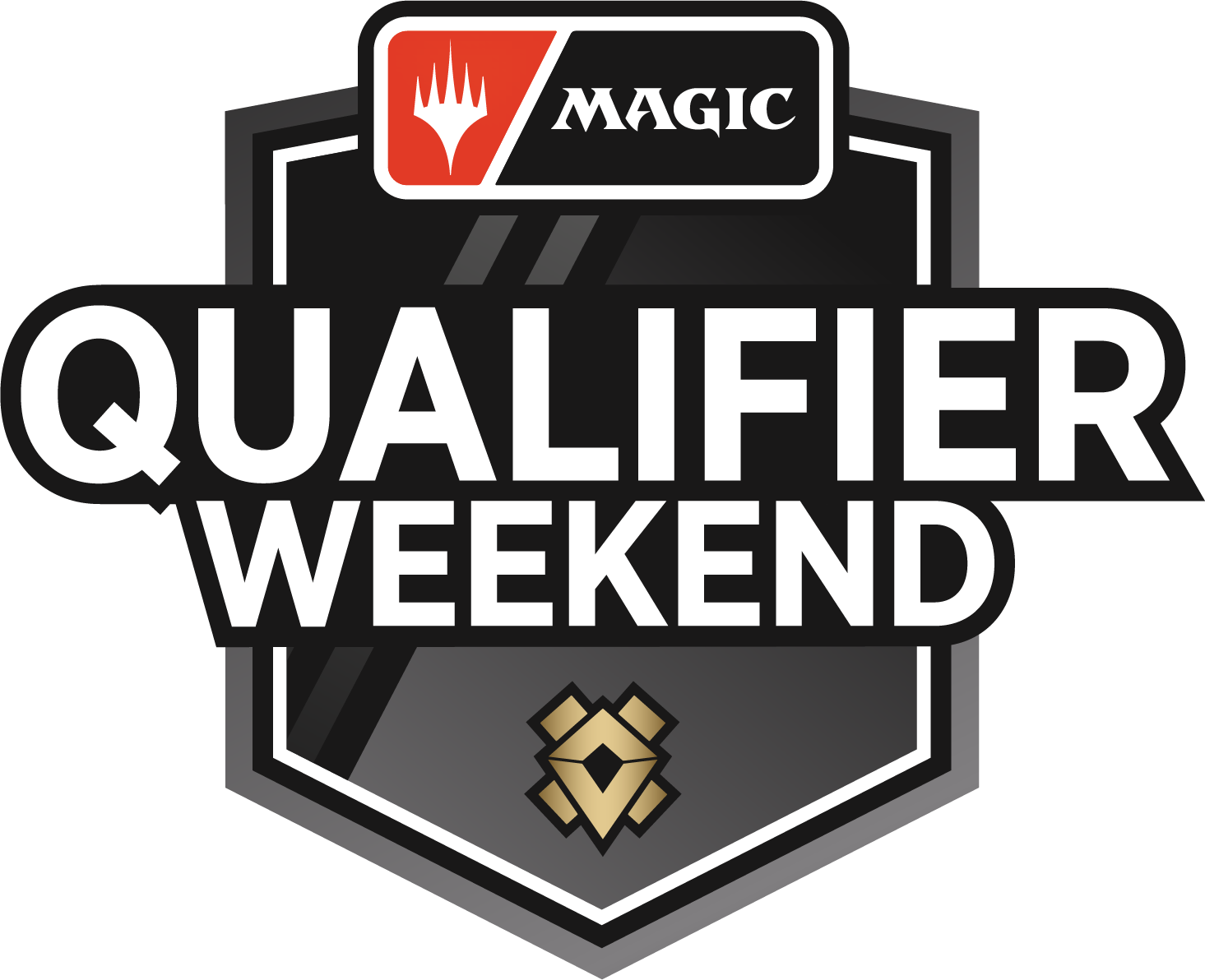 Qualifier Weekends are the second step in each split, with top-ranked players from MTG Arena and more facing off over two days to qualify for the Zendikar Rising Championship.


The complete Qualifier Weekend information has all the details, including more ways to qualify than being a top Mythic-ranked player.

Players may compete in a Qualifier Weekend through any of the following qualifications: 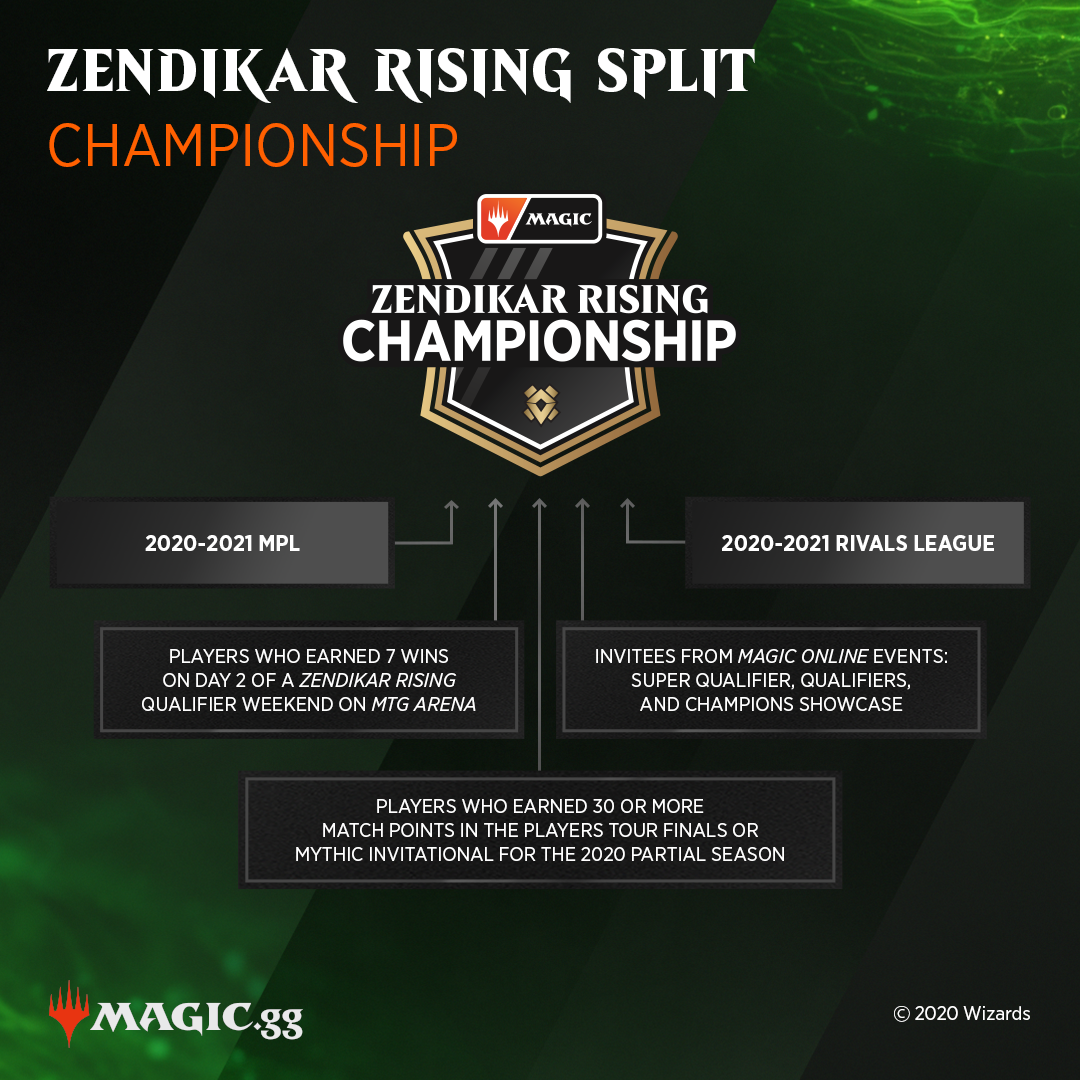 (We have also updated details from the August 27 Esports Update with additional Zendikar Rising Championship prizes.)

(New) MPL and Rivals players will earn points toward their league standings from each split's Championship:

Players may compete in the Zendikar Rising Championship through any of the following qualifications:

Planning for an Uncertain Future

It goes without saying that 2020 has been a year of upheaval and change, including in the world of Magic Esports. Immediate midseason program needs were a challenge no one anticipated. This new foundation for the 2020-2021 season has flexibility to not only allow us to add more play opportunities, but to meet the demands of a constantly changing world.