With all 70 players of the MPL and Rivals League streaming live and playing online through MTG Arena, everyone can follow their favorites battling for $400,000 in season prizes and postseason playoff spots.

The April Strixhaven League Weekend will be streamed live April 10 and 11 on twitch.tv/magic, beginning at 8 a.m. PDT (11 a.m. ET/3 p.m. UTC) each day. With Swiss pools and each match determining which players will stay safe—or fall to relegation—there's no guarantee for feature matches.

Only the best showdowns and biggest victories await viewers all weekend long.

Be sure to check out our overview of the Strixhaven League Weekends for the details on Swiss pools and how players can lock in a Magic World Championship invitation—or end with relegation—each weekend.

Swiss pools are based on standings, which means we know the pools starting on Saturday morning—including those in prime position to earn an invite to Magic World Championship XXVI.


With Paulo Vitor Damo da Rosa holding a narrow one-point lead over both Gabriel Nassif and Ondřej Stráský, and just one or two more over both Brad Nelson and Márcio Carvalho, "Who earns a World Championship slot?" is a question left wide open at the top of the MPL. With Hall of Famers and all-stars that close, any one of these players can have a hot weekend to claim their ticket.

If reigning World Champion Damo da Rosa finishes the weekend at the top of the standings, the invitation will be added to the slots awarded to top-finishing players at the MPL Gauntlet—an outcome that's definitely possible for the Elite Spellbinder himself.

Just three points separate the top seven players that start in Pod A on Saturday morning. Matt Sperling, Eli Kassis, and Stanislav Cifka have been Rivals League leaders throughout the season, but MTG Arena all-star Luca "LordofIronforge" Magni's outstanding performance wrapping the Kaldheim Split put him into contention. Riku Kumagai is hot off his Top 8 finish at the Kaldheim Championship on top of a strong showing during the Kaldheim Split as well.

It sets up a murderer's row of players all ready to claim a coveted promotion to the MPL next season along with a World Championship slot.

In addition to feature matches at twitch.tv/magic, competitors will be sharing each of their matches on their personal streams throughout Saturday and Sunday. With 70 competitors and Swiss pools setting up new battles each day, the excitement will be nonstop all weekend.

Decklists will be published on Magic.gg Saturday, April 10 shortly before the start of the League Weekend. You'll also find exclusive content by following @MagicEsports on Twitter and the hashtag #MTGLeagueWeekend.

Standings will be provided throughout the broadcast and shared by @MagicEsports on Twitter at the end of the League Weekend. Official standings and League Weekend match results, as well as a recap from across the league, will be updated Monday, April 12 on Magic.gg. 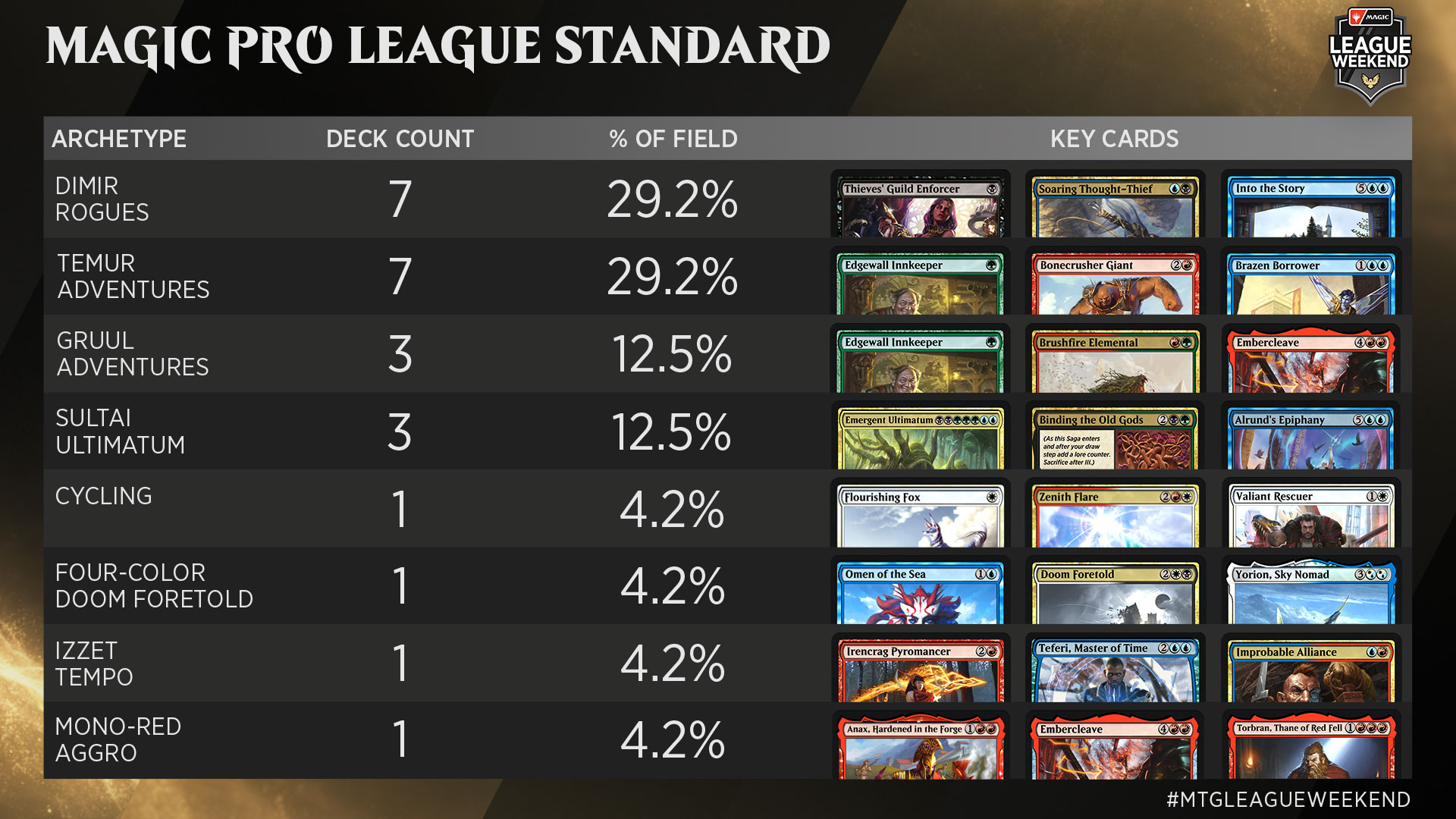 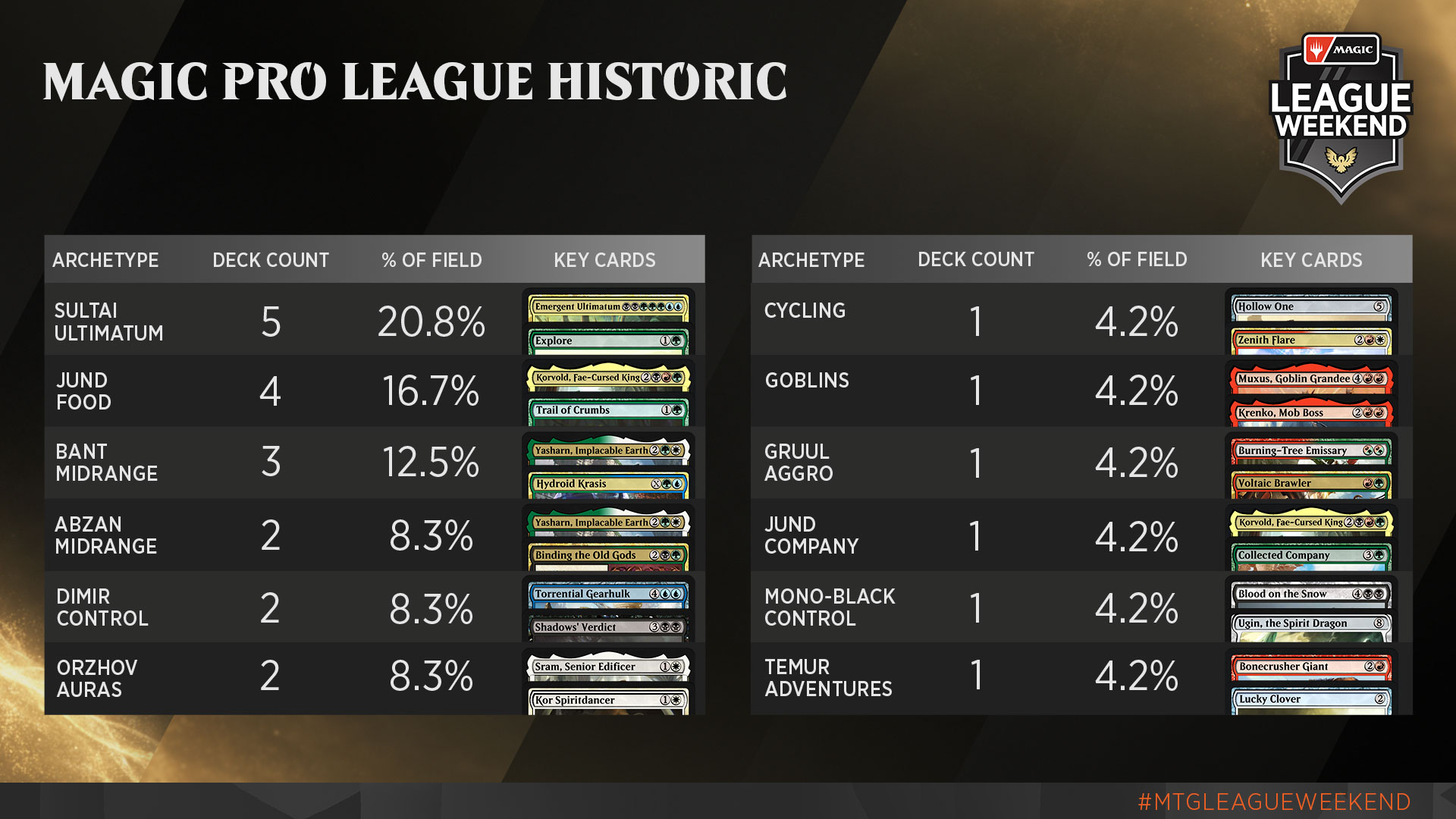 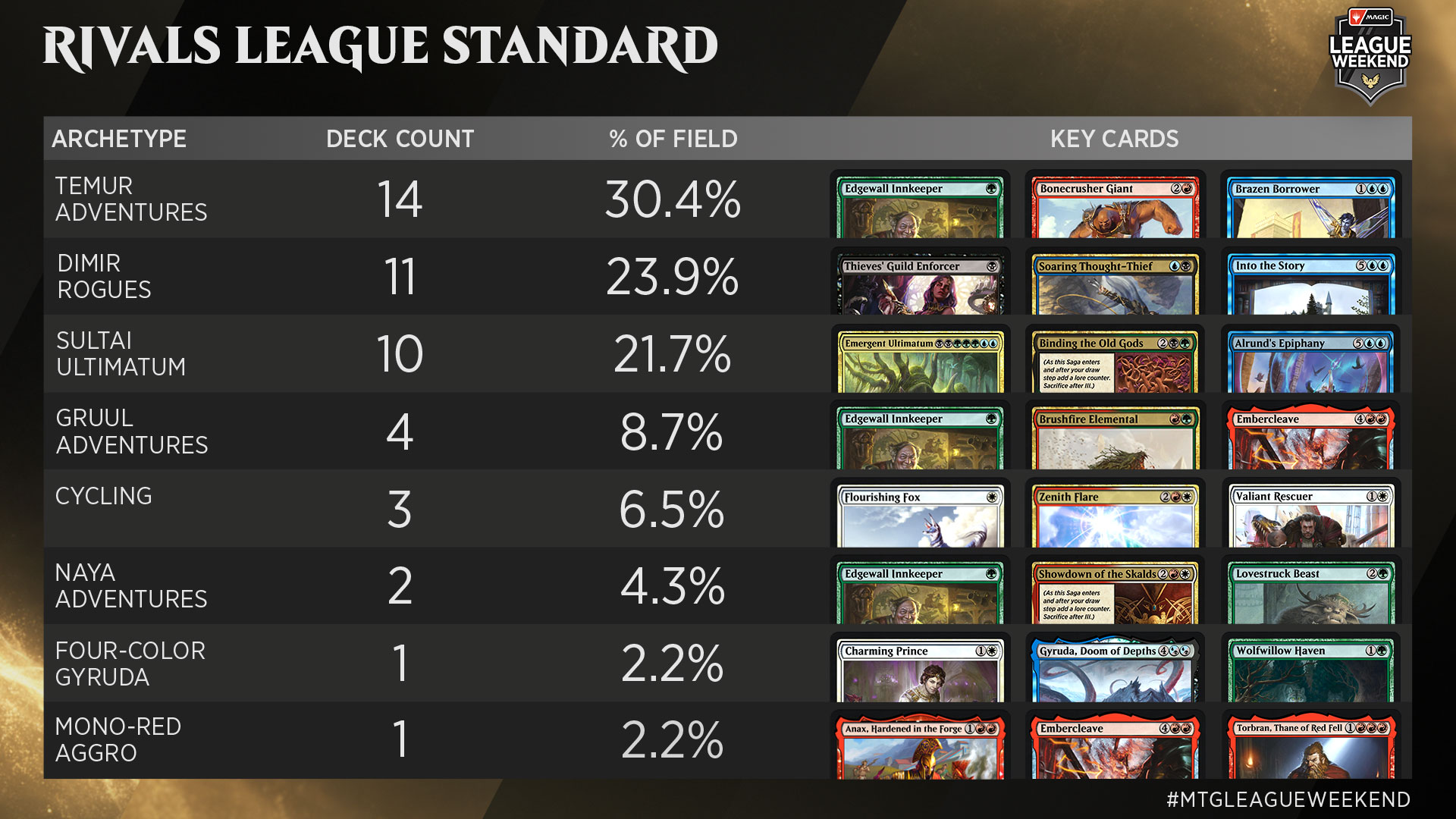 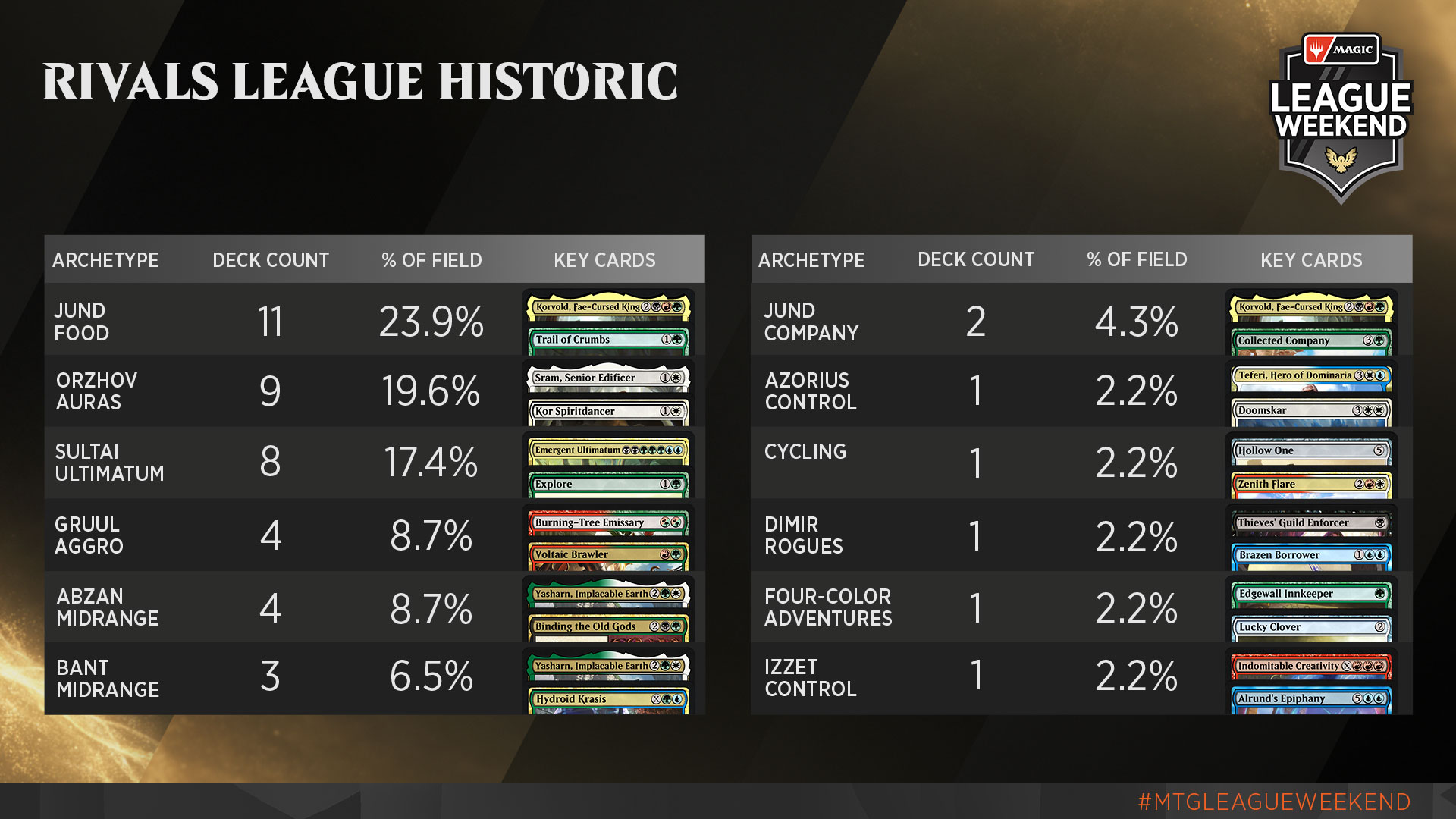 Decklists are open, and players will be able to review their opponent's Constructed decklists anytime throughout the League Weekend. 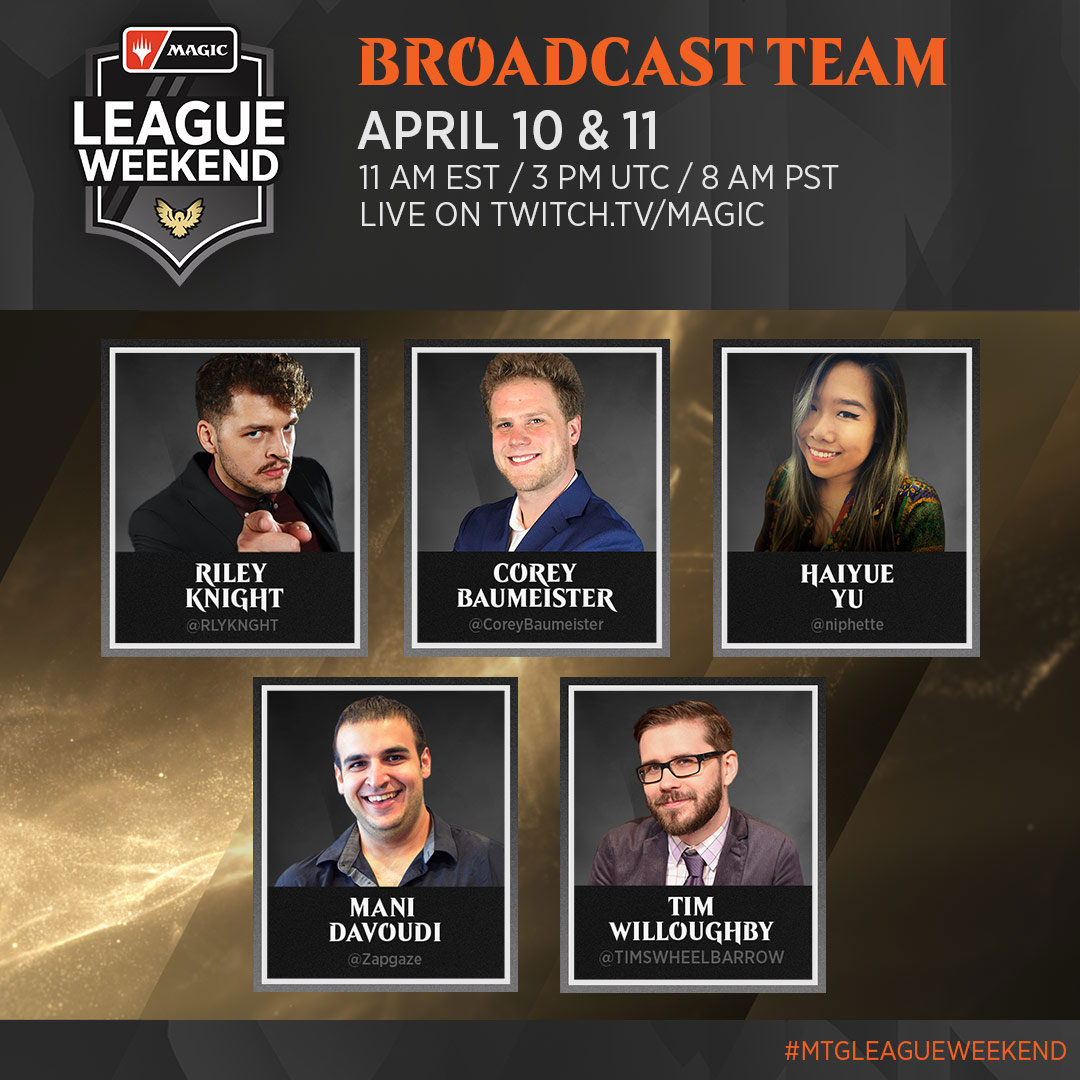 
What Is the Format?

The April Strixhaven League Weekend will feature both Standard and Historic Constructed formats.

Each match victory is worth 1 point toward a player's league standings. The player that finishes at the top of standings at the end of Sunday in both the MPL and Rivals League earns an invitation to Magic World Championship XXVII—and an invitation to the MPL for the 2021-22 season.

Check out our Strixhaven League Weekends explainer for even more details.

You can watch every feature match for the April Strixhaven League Weekend live on twitch.tv/magic.

Your journey to join the Magic Pro League or Magic Rivals League begins on MTG Arena. The April 2021 Ranked Season is underway now. Finish in the top 1,200 ranked players at the end of the month to unlock your invitation to the May Strixhaven Qualifier Weekend.

Ascend to the Strixhaven Championship, taking place June 4–6, and prove yourself as a challenger on the path to the MPL and Rivals League!